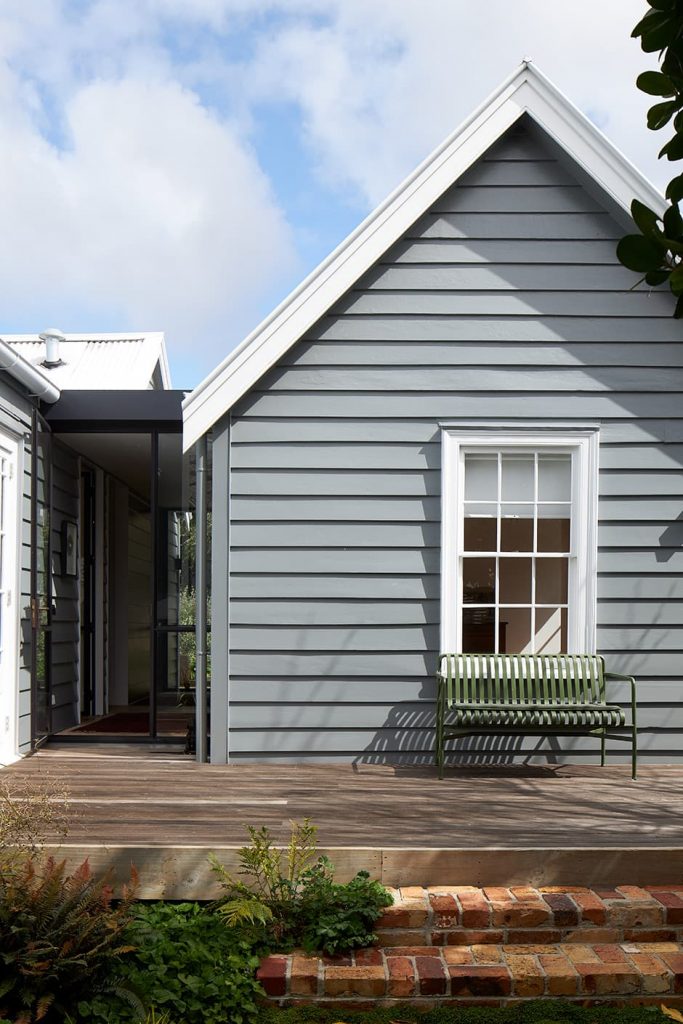 Its history has been honoured while securing it a sophisticated new future courtesy of a few well-resolved bells and whistles.

Sometimes in order to move forward, we must first go back. That’s certainly true of this home in Parnell, Auckland, which began life circa 1875 as five barracks used to house soldiers in nearby Albert Park. A decade or so later, the buildings were moved and arranged for one Captain Pirie and his family to form a large multi-gabled house, and that was just fine for a time — but now an artistic upgrade has seen it reconnected with its roots while facing an elegant new future.

Having changed hands several times over the years, in 2017 the home found itself back on the market. Sheridan and Andrew Harmos were the first to view it —and snapped it up the same day. They initially engaged director of Native Architecture Fraser McNaught, builders Ninety45 and interior designer Karin Montgomery to renovate the kitchen and bathroom only; however, it quickly became apparent that there was a lot more to do, so before Fraser knew it, the project had snowballed into a complete interior overhaul.

Apart from the addition of a regrettable new kitchen, plus some timber panelling and cabinetry, not much had been done to the dwelling since the five barracks became one. From the word go, the team wanted the fresh fit-out to celebrate the original spirit of the buildings, reopening the house to emphasise that it had once been separate structures while making it a little more comfortable. They had their work cut out for them. 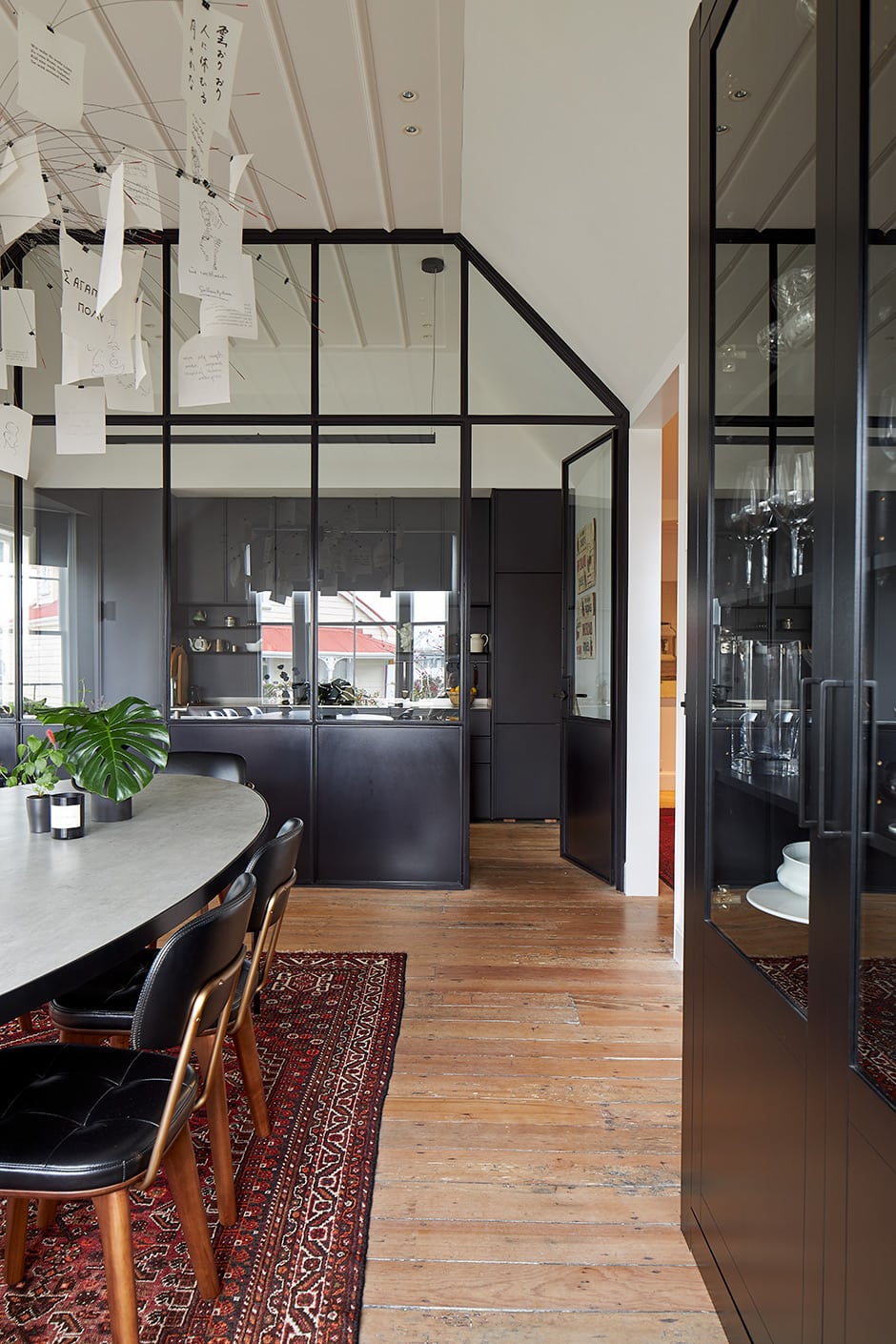 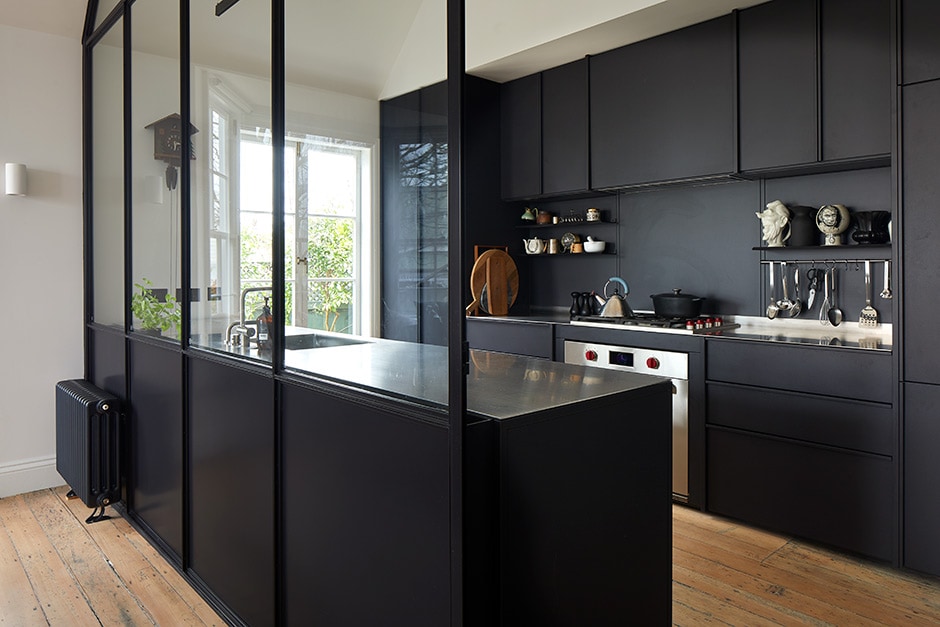 “The condition of the house was unbelievable,” says Fraser. “When we started pulling it apart, we couldn’t understand how it was even standing. It had to be gutted and certain parts rebuilt, like the roof in the kitchen and dining room, where most of the rafters weren’t touching the walls because the walls had bowed so much. We didn’t want to make everything perfectly square, though — we wanted it to still have the wonkiness and character of an old home when we put it back together.” 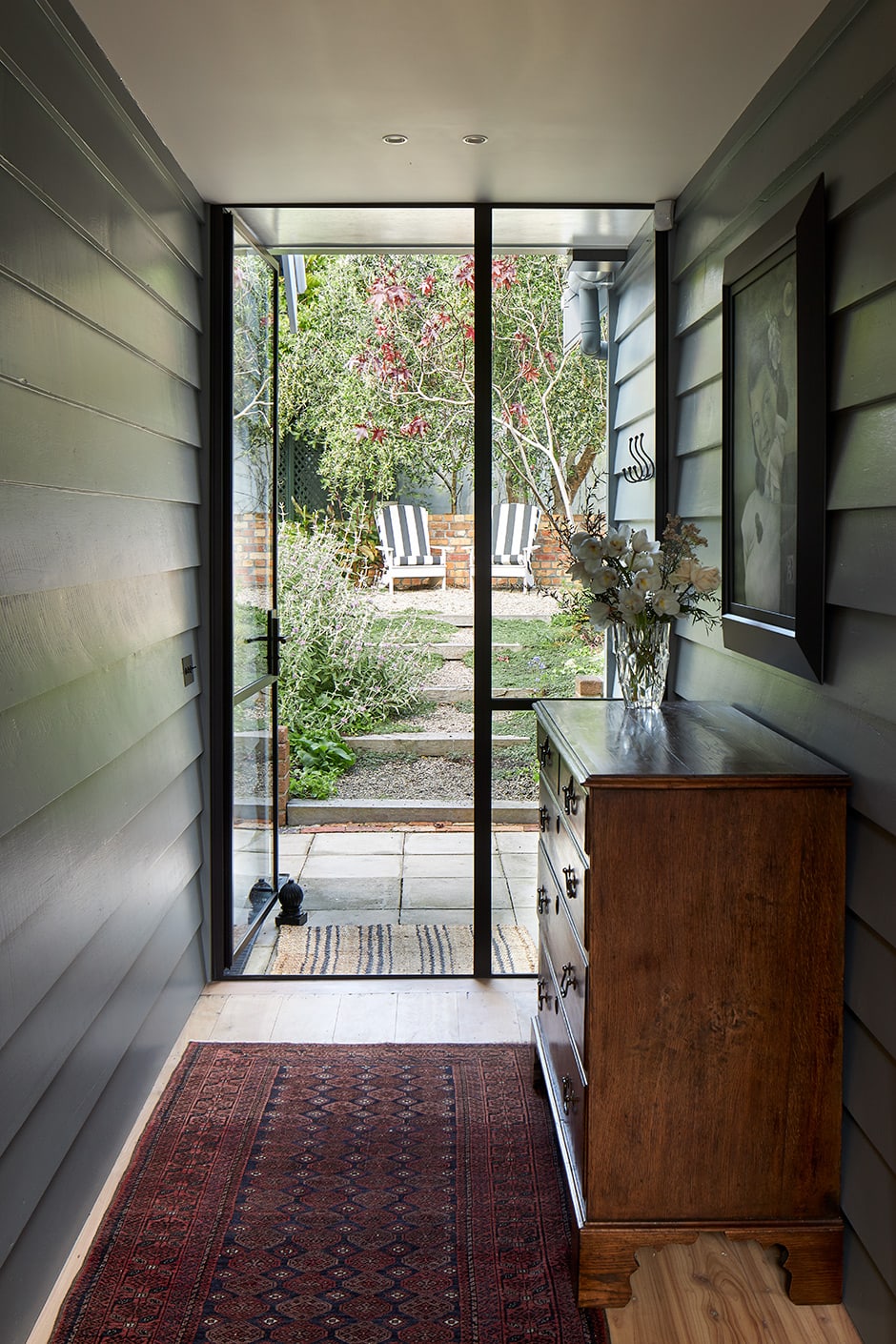 Sheridan and Andrew’s astounding art collection was also key during the design phase. The couple, who have four adult children, were downsizing from a larger family home, so they specified maximum wall space to showcase as many of their pieces as possible. In response, Fraser removed much of the built-in furniture and kept any new cabinetry to a minimum.
The home’s layout was relatively formal, with one barrack for kitchen and dining, which Fraser partitioned with a tall screen; two barracks for bedrooms and bathrooms, which were reconfigured to allow for guest rooms, an ensuite and main bathroom, where there’s a secret door to the laundry; another barrack for living; and another that previously housed a living area and office, but was turned into the couple’s suite. Eschewing the contemporary call for open-plan, Fraser retained this footprint, along with the hallways that linked the original buildings — apart from the “horrible little connection with poky windows” that led to the couple’s suite, which was demolished to make way for a rebuild that cleverly included wrapping the exterior kauri cladding inside. 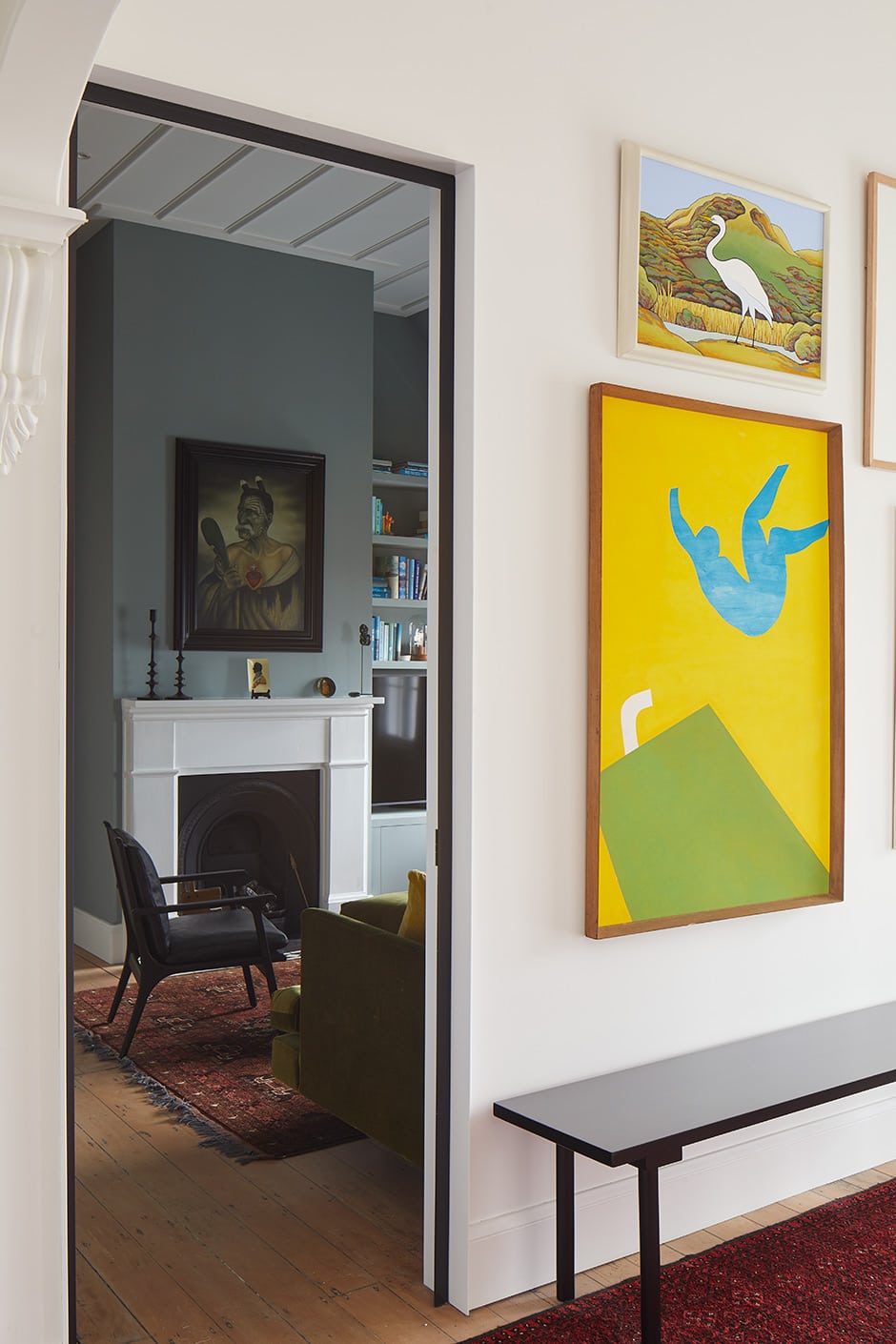 Doing away with the tight doorways into each of the living rooms, Fraser widened the zone between the kitchen and the adjacent library to form an entry foyer. He then created a secondary ‘hallway’ of glazed steel openings that allows access from this foyer to the living spaces beyond without the need to travel out of one room, into the original hallway now tucked behind the wall, then into the next. Inspired by the steel kitchen, the black doors are among many dashing details devised to link and distinguish between past and present. 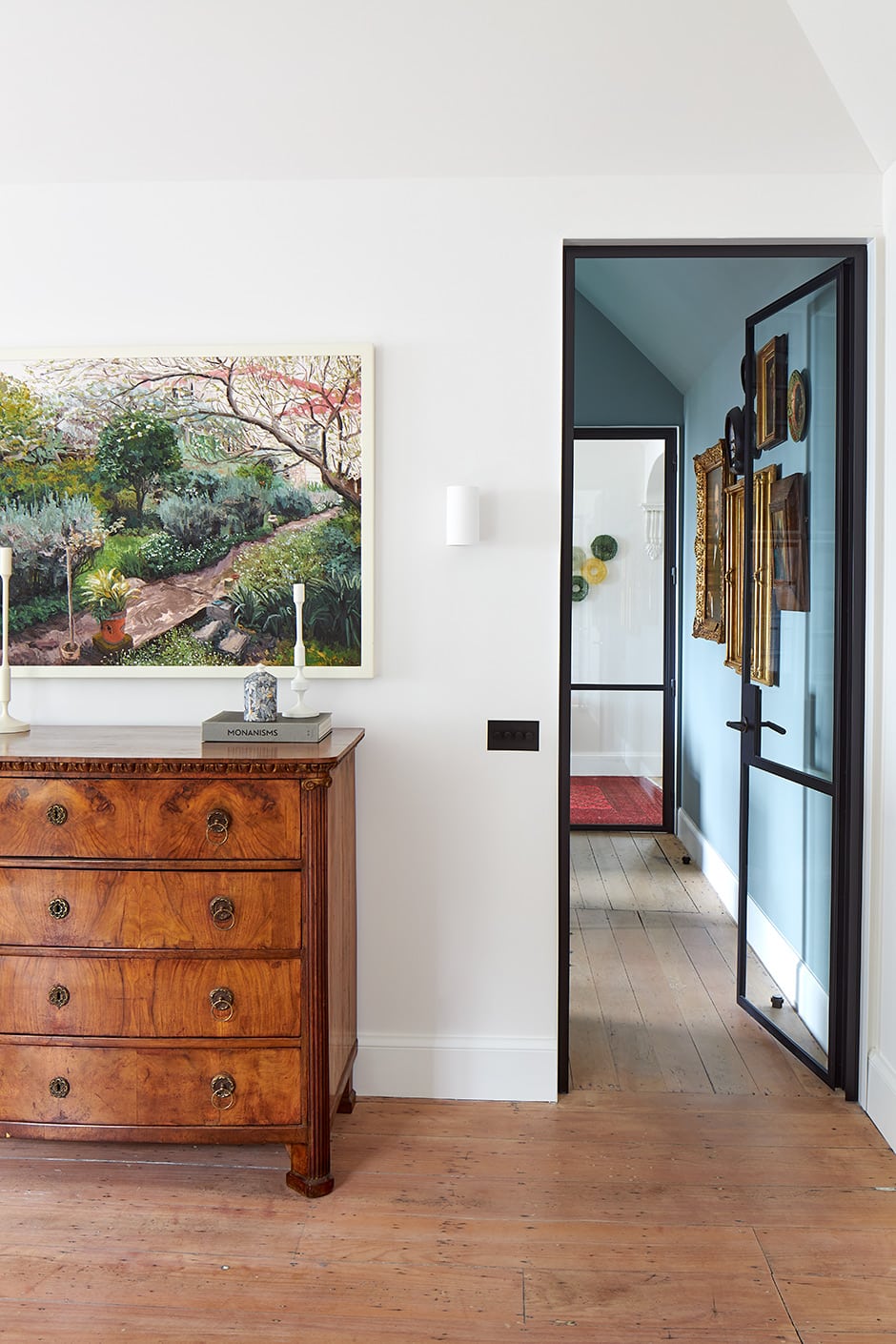 “The language of the new elements is very clean,” says Fraser. “We wanted to complement the ornate detailing of the existing home, rather than copy it, because it never looks the same if you do, so we kept our detailing nice and fine.” 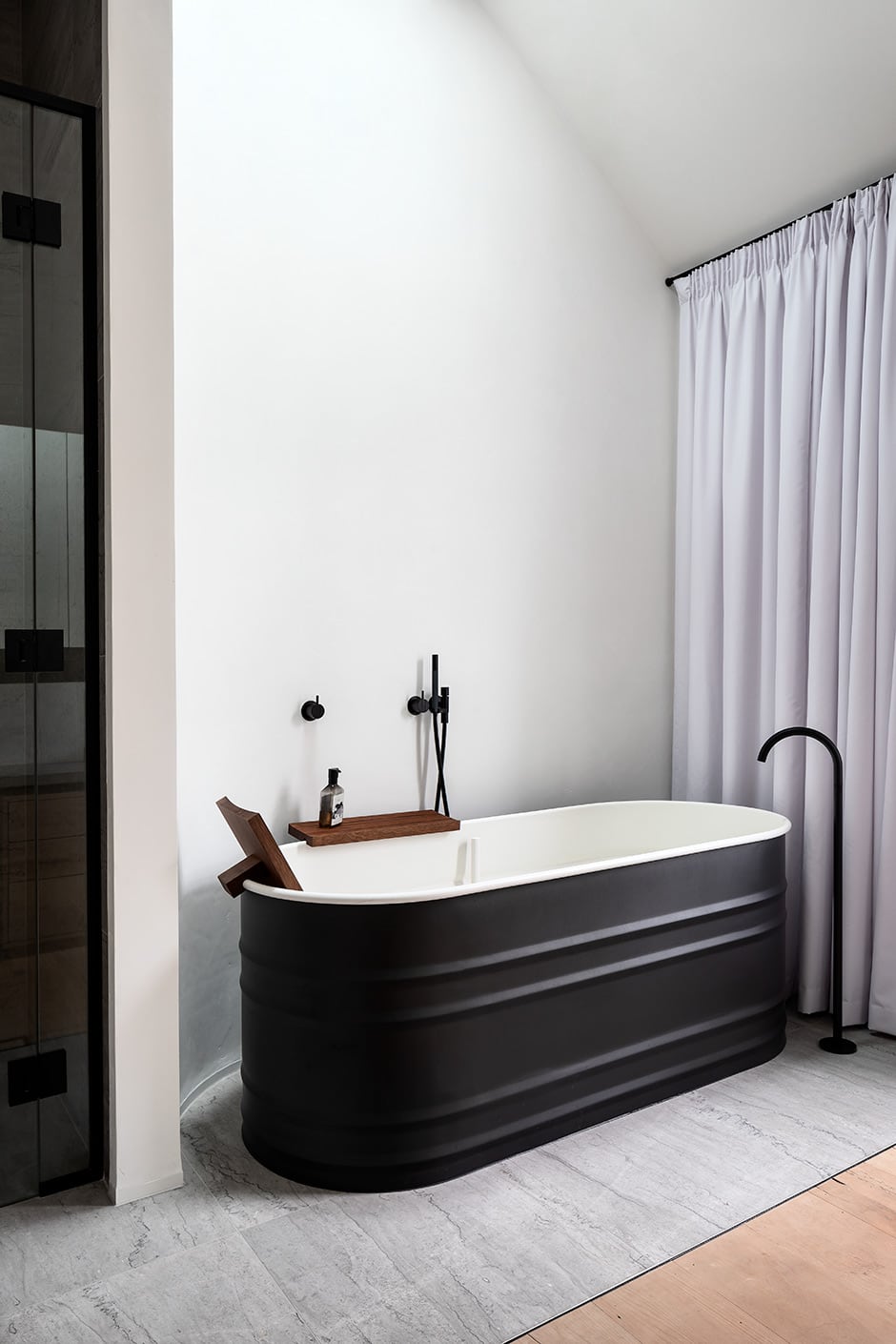 For Fraser, a highlight of the renovation was the twin-gabled carport, which along with the perforated exterior brick wall was the brainchild of the team at Xanthe White Design, who were charged with the landscaping. “It doesn’t have the same building code requirements as a house, which allowed me to detail it in a way that I wouldn’t usually be able to while keeping it slender and light,” he says. “It’s a nice reference to the other five gables and the interior of the home, and a striking feature on the street, plus its openness allows Sheridan and Andrew to better connect with their neighbours as well.” 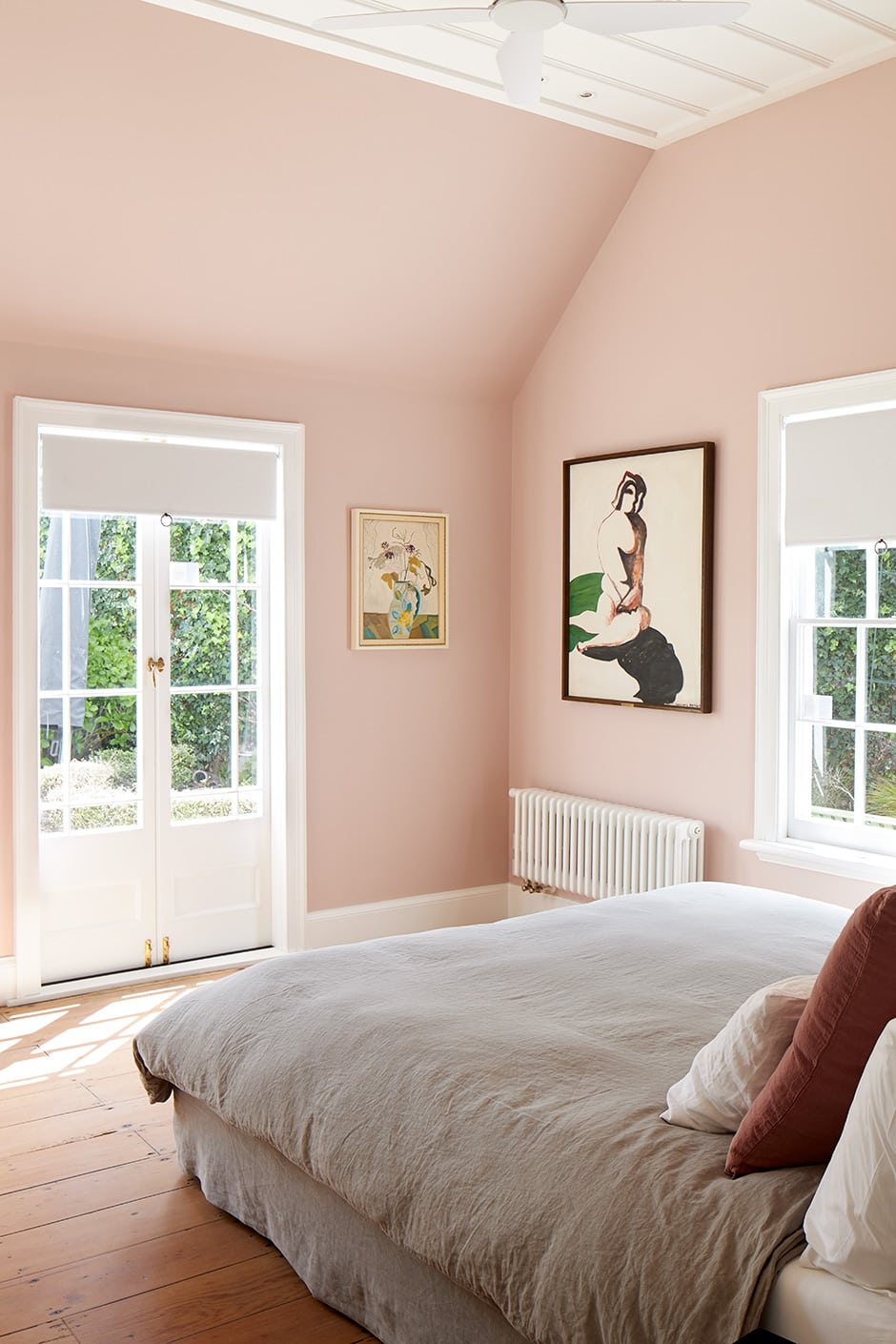 A few steps back for a giant leap ahead, the refit of this remarkable home honours its heritage and a trove of incredible artwork by keeping the updates sophisticated yet simple. “We just tried to work with nice materials and play with light,” says Fraser. “These subtle things are what I like most. I think the house has more character now than it did before.”

PreviousBy Dylan Rhynd of DPRD Studio Architecture, this beachy St Heliers build is the place to be 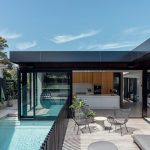 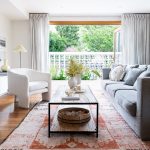