This timber-filled new build in Whitford really masters the view 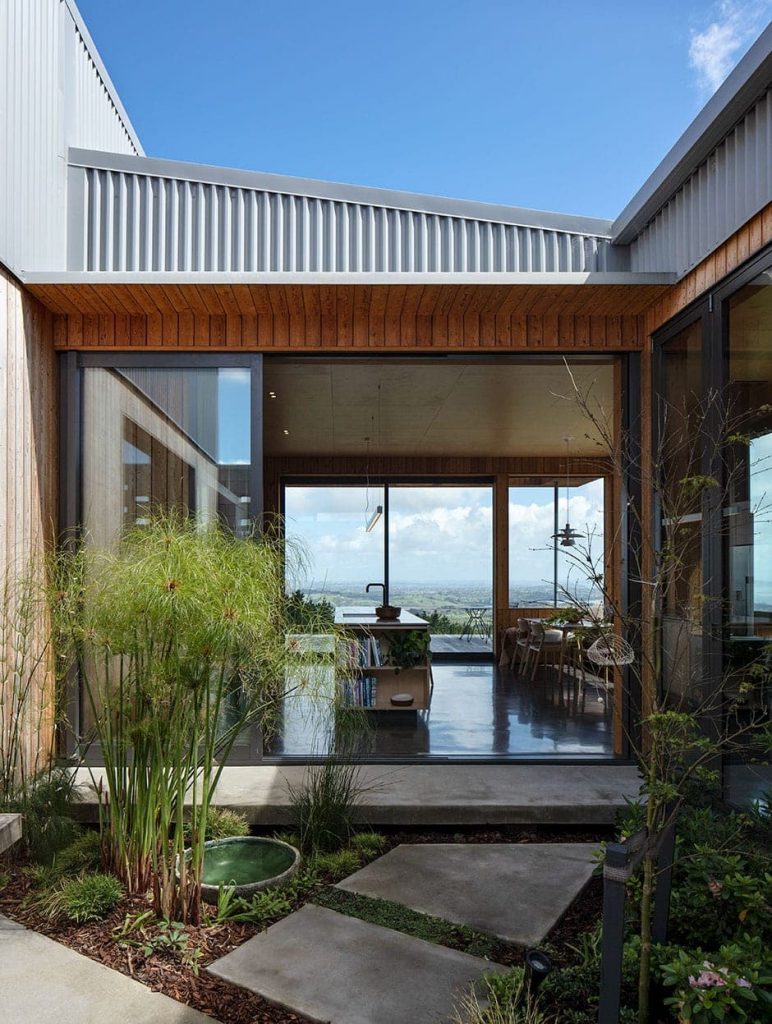 It’s conceived as a gathering of farm buildings with a plant-filled outdoor courtyard.

Sometimes good design is about holding back. Not playing all your cards at once. Drip-feeding the wow moments. That’s exactly what this home in Whitford, south of Auckland, does.
This was a slow-burning dream for owners Tracie and Marcus Male, who fell prey to the GFC, buying and selling a different site while financial forces swept away their plans. Ten years after they started on the path, they finally settled on this couple of hectares on a wind-buffeted ridgeline in a rural subdivision. 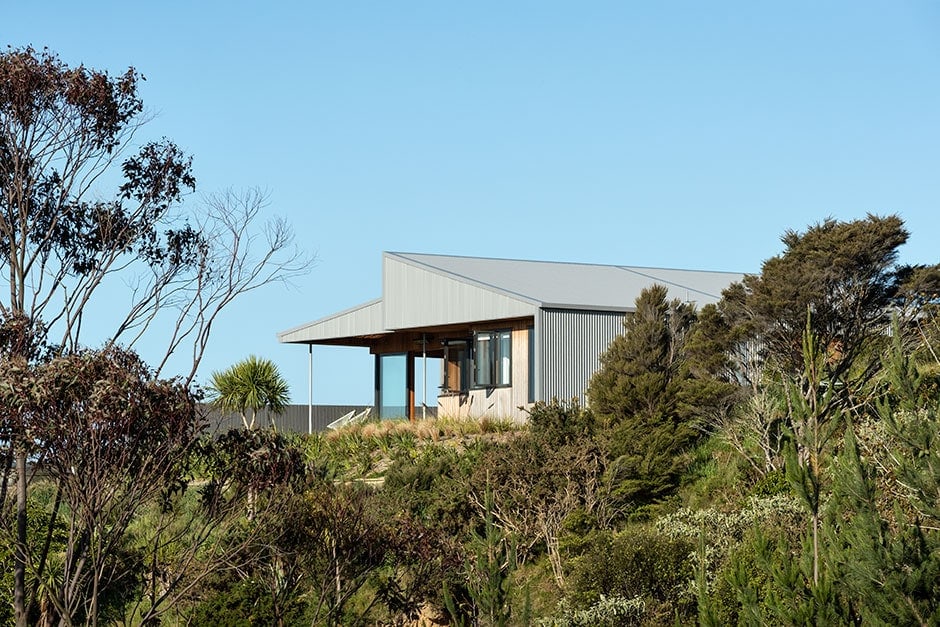 Architect Roy Tebbutt of Strachan Group Architects (SGA) acknowledges it would have been easy to rush in, spread the home across the slope and turn fully glazed windows to the outlook that whirls around in a dizzy 360-degree span from Manukau Heads to the spread of Auckland City on the horizon, the islands of the Gulf and the Coromandel Peninsula. “It really is all-encompassing,” he says. 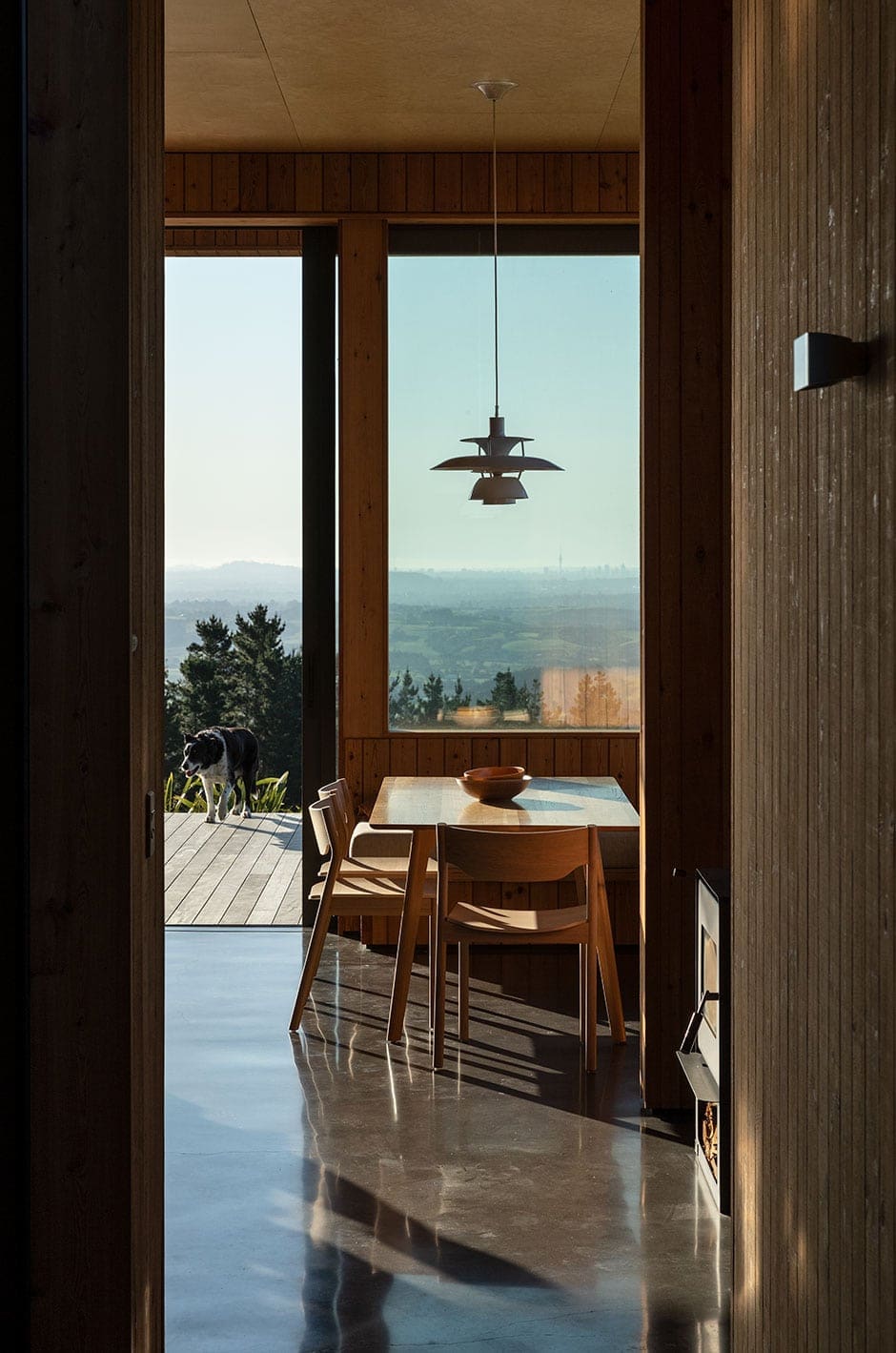 Although the views were uncontained, the building platform was the opposite: a pre-approved 20m x 20m square. “This constraint led us to a different process and solution,” says Roy. “It made us think inside the box.”

The Males had waited a long time to present their brief to the architect. Marcus is a dry-stock farmer who works family land nearby. This was his chance to build a ‘modern farmhouse’ — designed with style but practical and unpretentious, so his Land Cruiser and farm dogs didn’t seem completely out of place. A teacher aide and former landscape gardener, Tracie always loved the idea of a courtyard house. “I knew the site was windy but it was important to have a green space to breathe in,” she says. 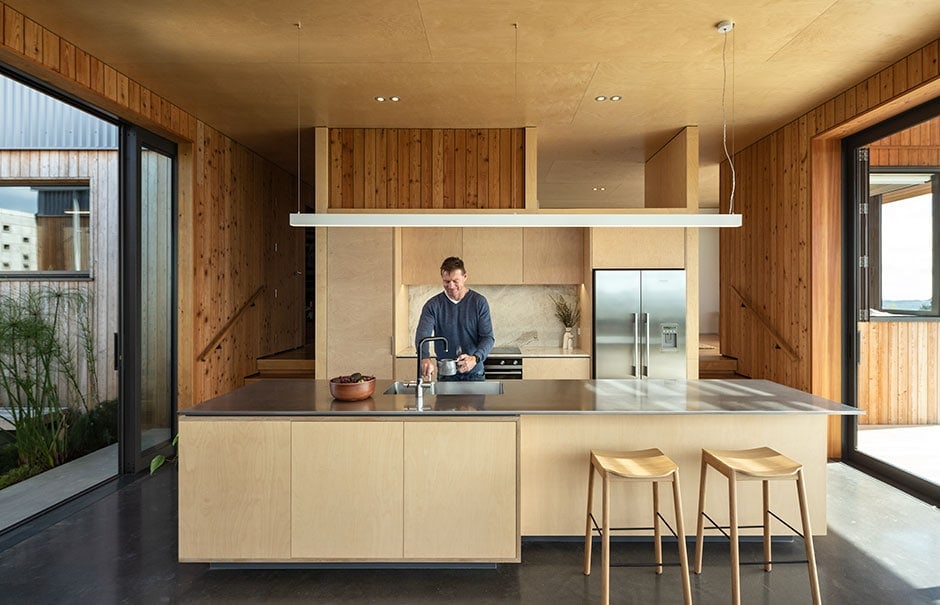 This is architecture that conceals then reveals as a way to curate and moderate the view. Using robust materials that take inspiration from the rural vernacular, the wedge-like forms of the home are broken up beneath two split-gable roofs; Roy explains that the plan can be seen as a gathering of farm buildings. A long concrete-block perimeter wall embeds the property into the landscape. Two separate peaked elements, clad in no-nonsense vertical Colorsteel, rise up beyond it. One accommodates the living zone and main bedroom suite, and across a central courtyard is a bedroom wing for the couple’s adult children. 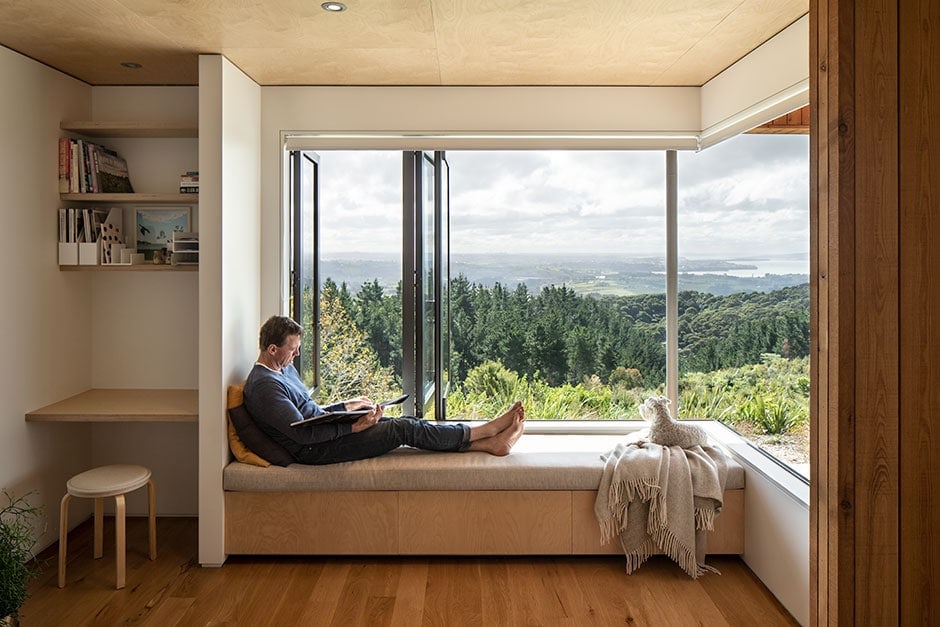 The same fortress-like wall that affords the family privacy also issues an invitation via apertures punched through to the courtyard, heightening a sense of mystery. Floating concrete stairs lead to a simple wooden doorway that’s a portal to the other side. 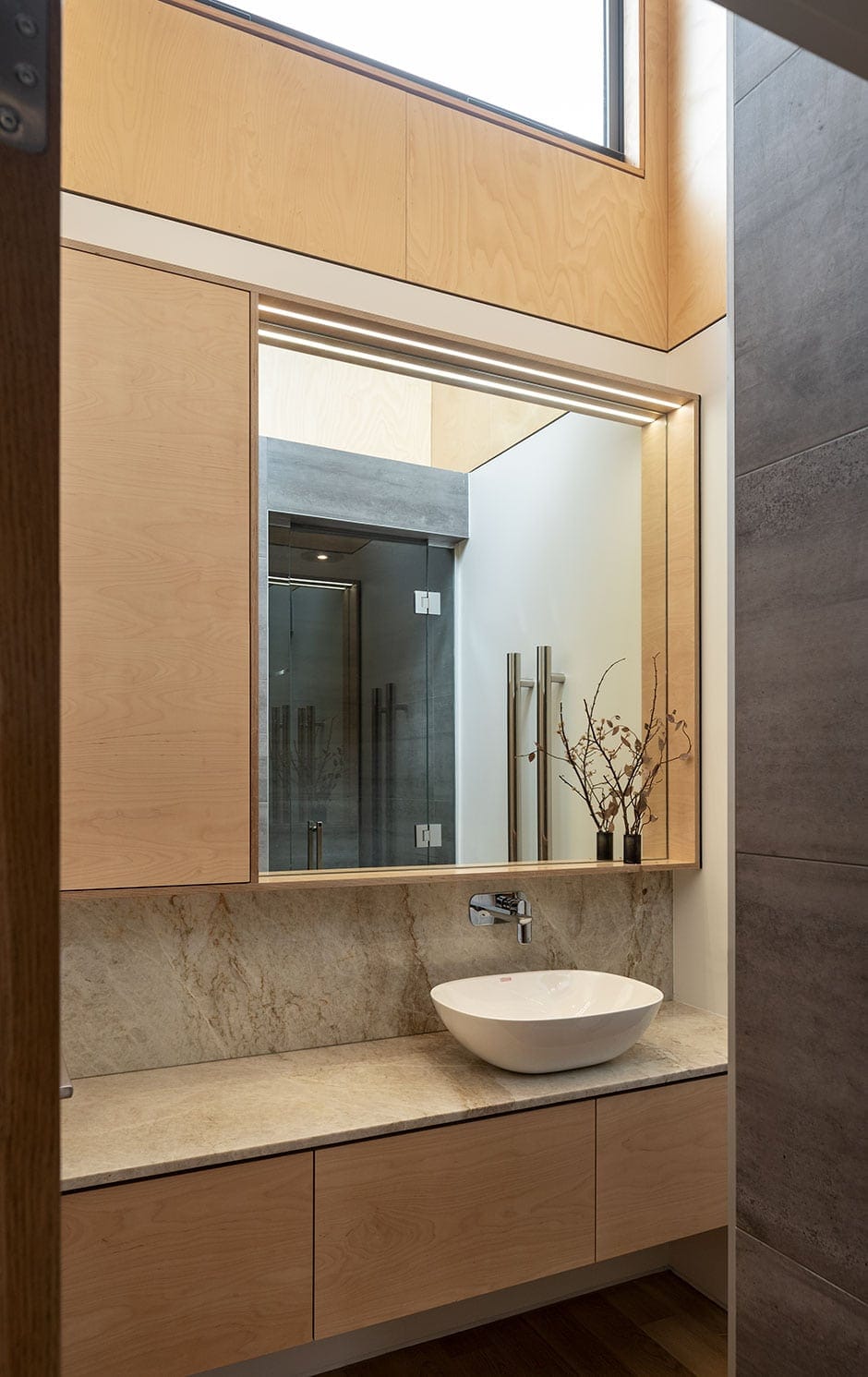 The architects have worked hard on the journey to entry that steps up, crosses a timber corridor, then descends again to the living level. “Although the ceiling throughout the home is flat, because the main living is stepped down, the stud here is a generous 3.4m, which gives a really voluminous feel,” says Roy.

This is by no means a tiny home, but it is the smallest in the subdivision and its 206m2 is configured to be intimate and interesting by a layout that breaks from the norm. The open-plan area includes only a kitchen and dining room, with a living/TV room a few steps up — connected but separate.

It was important to the Males that the home be eco- and energy-friendly. Concrete floors in the living zone act as a heat sink, and the west face has generous eaves that limit the summer sun. Rainwater is harvested and used in the loo and for irrigation, and wastewater is disposed of via an on-site effluent system, its dripper lines feeding the young plants.

A built-in bench seat in the dining zone — where the windows peel back, making Rangitoto feel like the backyard — is a magnet for visitors. For Marcus, though, it’s the window seat in the living room he feels most drawn to. Here, he can sip an espresso as dawn breaks and complete a weather check to see what the day on the farm might hold. For Tracie, it’s getting to feel part of nature that makes this home so special, either with her first cup of tea in the sheltered central courtyard or an end-of-day glass of wine on the deck. 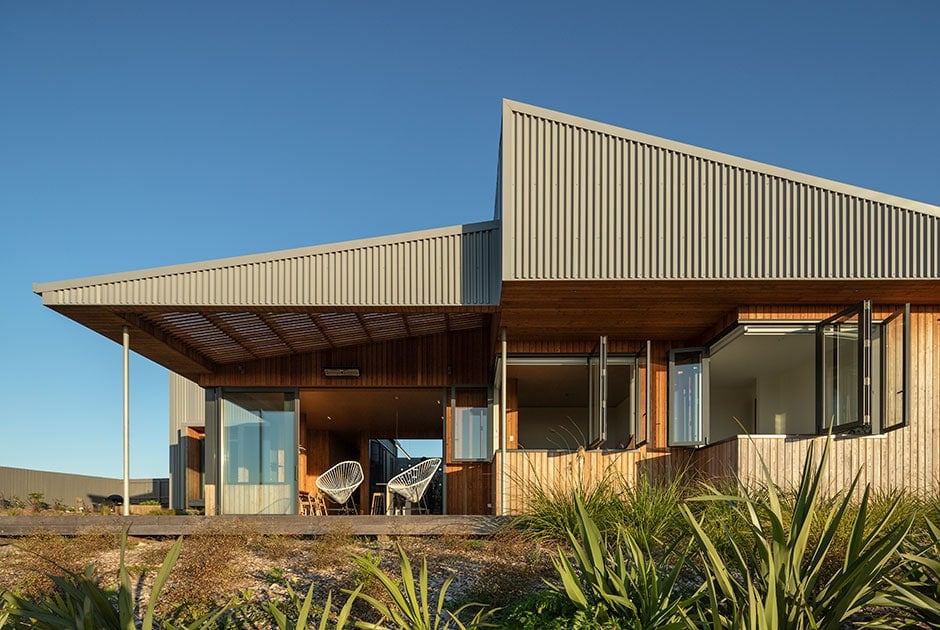 A few weeks before the couple started on the foundations, an awesome storm rampaged through this area and a hefty chunk of their section slipped clean away into a gully. It could have put them off, but they kept calm. They carried on. They put faith in a team they had long admired — and built their happy place. 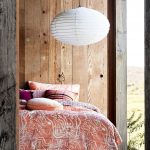 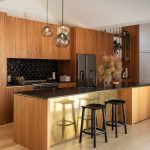