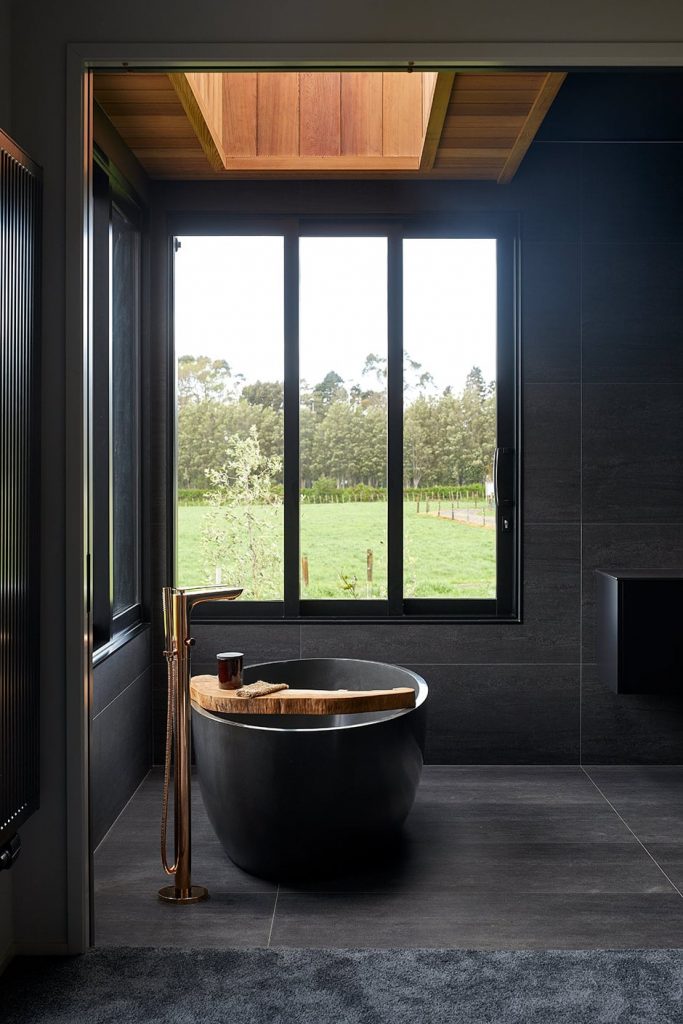 With 360-degree views from mountain to sea, it’s a farm house that makes room for everyone.

At 5’2”, Natasha Hintz is one petite powerhouse. The average week sees this marathon-running superwoman wrangling five farms, a hair salon, home projects, a busy household and several kids — and not just her own, either. 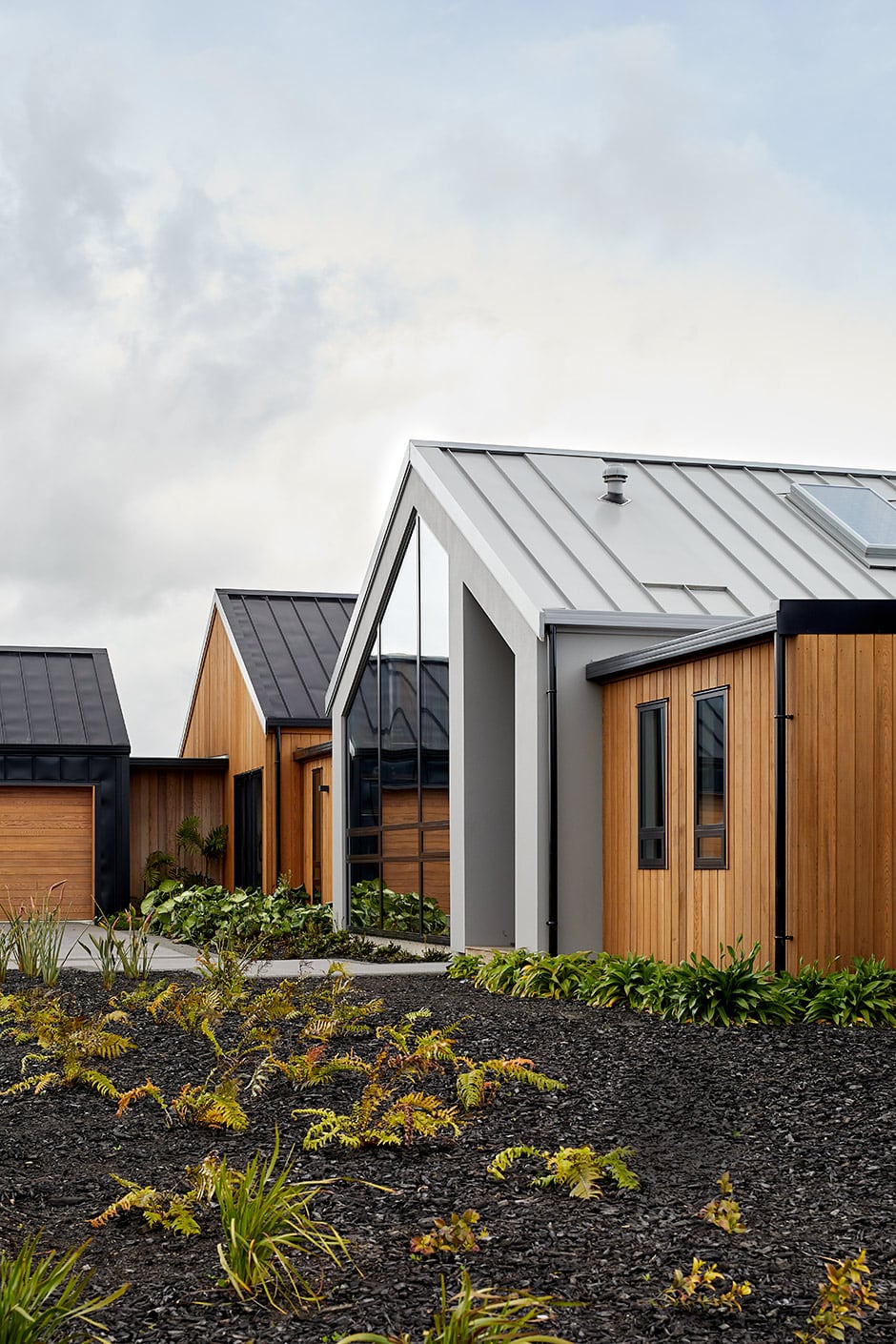 Natasha and her farmer husband Brenden have been taking in children in need since they themselves were young. “Our home is like hire-a-family,” she says. “We have our own adult kids and lots of extras we inherit — and we built this house for exactly that. People might stay for a night or six months — it just depends what’s required. And we’ve usually got lots happening, so we can give people jobs. We’re always saying, ‘If you’re short of work, come and help us on the farm’, which gets people doing something purposeful. They’re all so much fun that we feel so lucky and wouldn’t have it any other way.”

Six years in the planning (during which the couple and kids all had a ball putting their two cents in — “although I had 96 cents worth,” says Natasha), this bustling base is the Hintzs’ second build, and they’ve a string of renovations under their belts as well. They designed this one in collaboration with Stephen McDonald of Rosetta Stone Arkitektur, Jason Reid Builders and other local folk — a dream team of friends and friends of friends who’ve created a home that’s both social and a sanctuary.

Positioned to maximise the 74-acre property’s views, its aspect is its calling card. A little cottage surrounded by pine trees once stood in this spot, but the couple was confident there would be amazing vistas behind them, “so we took the whole lot down — and there were,” says Natasha. “Three hundred and sixty-degree views that include the mountain and the sea.”

With windows at each end to draw this scenery inside, the dwelling is made up of three gable-roofed pavilions (containing the main living spaces; the master suite; and the laundry, kids’ bedrooms and bathroom) connected by two smaller flat-roofed ones (housing a media room, study and powder room). The garage is attached, while Natasha’s salon, Solo, sits separate. 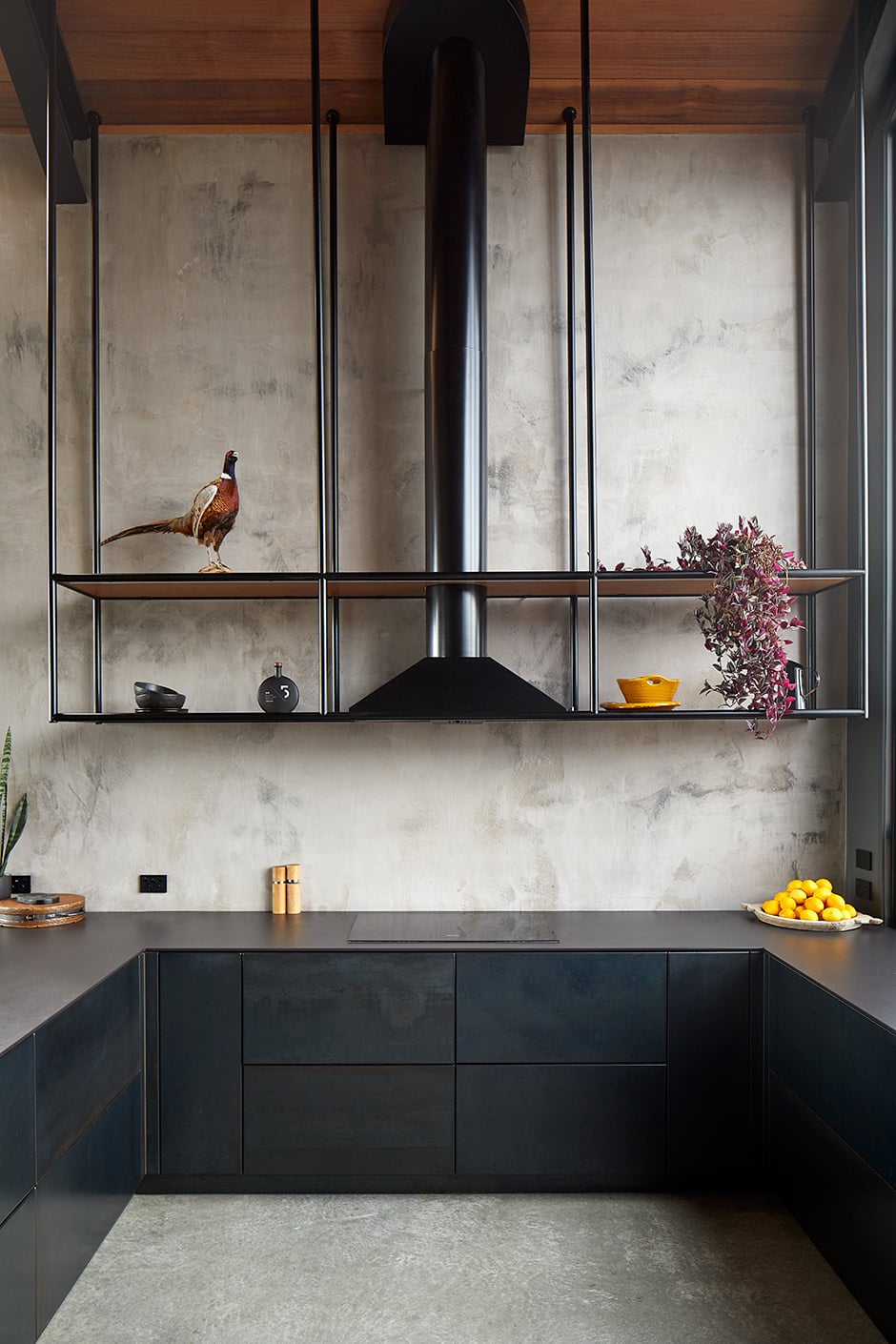 Lots of space in which to accommodate whānau was clearly important, as was a gigantic kitchen. “We’re a loud, boisterous family of foodies who entertain a lot — and I usually cook enough for 20, no matter how many people are here!” says Natasha, who briefed Annika and Brad Rowson of Rowson Kitchens on a generous open-plan design crafted from hard-working materials. The result is an award-winning industrial-style space dominated by a towering picture window, tall open shelving and wonderful waxed steel that’s developing a beautiful patina. 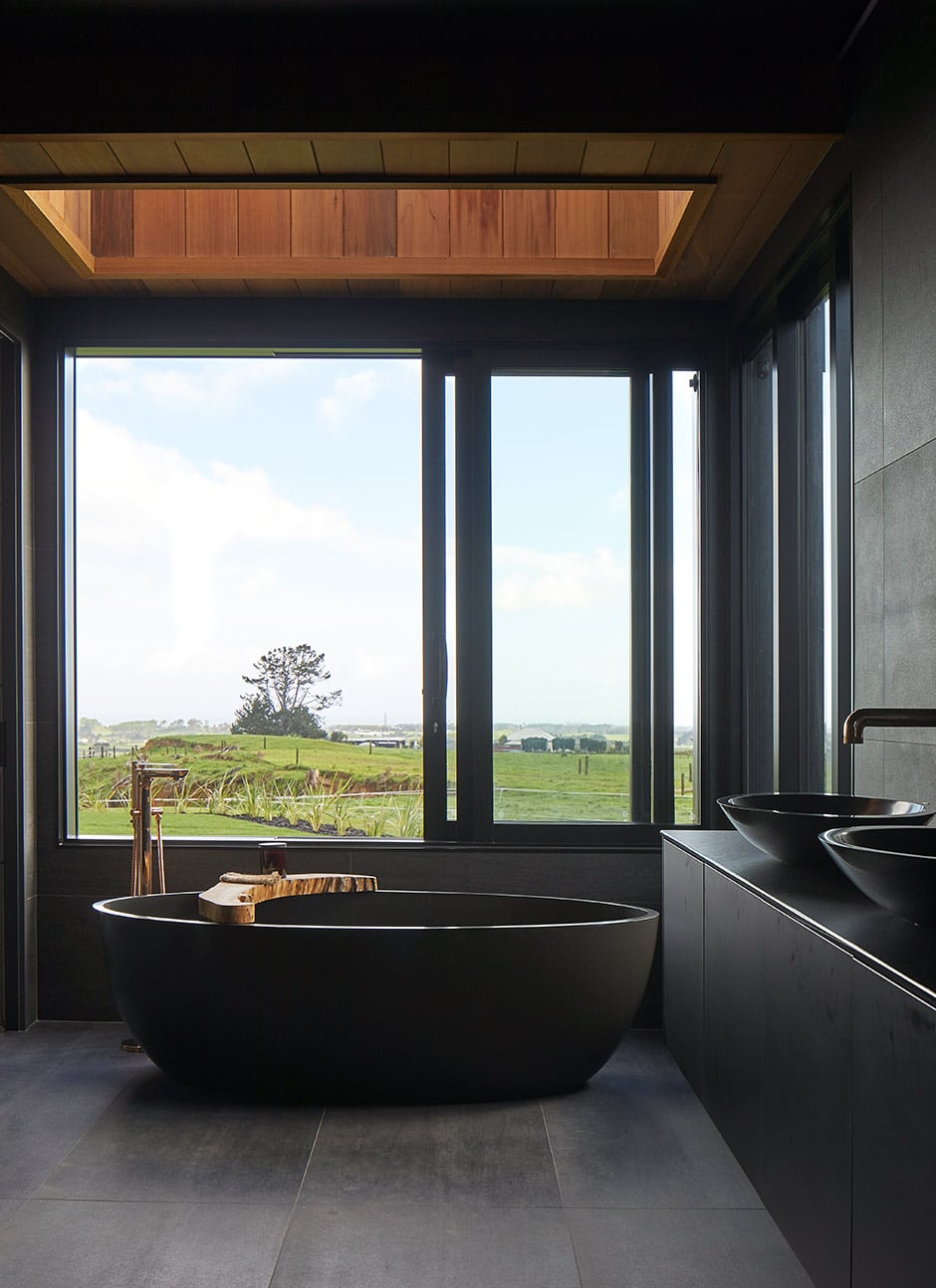 In keeping with the vibe of its inhabitants, the rest of the home’s material palette is similarly natural and robust, predominately wood, concrete and steel. “We’re not a ‘shoes off’ family, we’re a ‘shoes on, dance on the table’ family,” says Natasha. “We don’t like things that are too flash — we want durable materials that’ll handle a lot of fun, a lot of children and a lot of dogs [the family has three].”

During past decorating endeavours, she’s tended to choose ‘safe’ neutrals; this time, she turned the dial to moody black and grey, with timber and tan accents. “We’ve had people come in and say it’s too dark, but for us, it’s perfect,” she says. “When you’ve got so much sun and sea coming in, it needs something to bring down the brightness.

“Everyone tried to talk me out of having so much glass, too, because it’s a lot of work. But my response was simple: ‘I’d rather suck it up and clean them because I want those views.’ I’m a clean freak — I have four vacuums and a vacuum system, for goodness sake! — and do everything myself, except the very top windows. 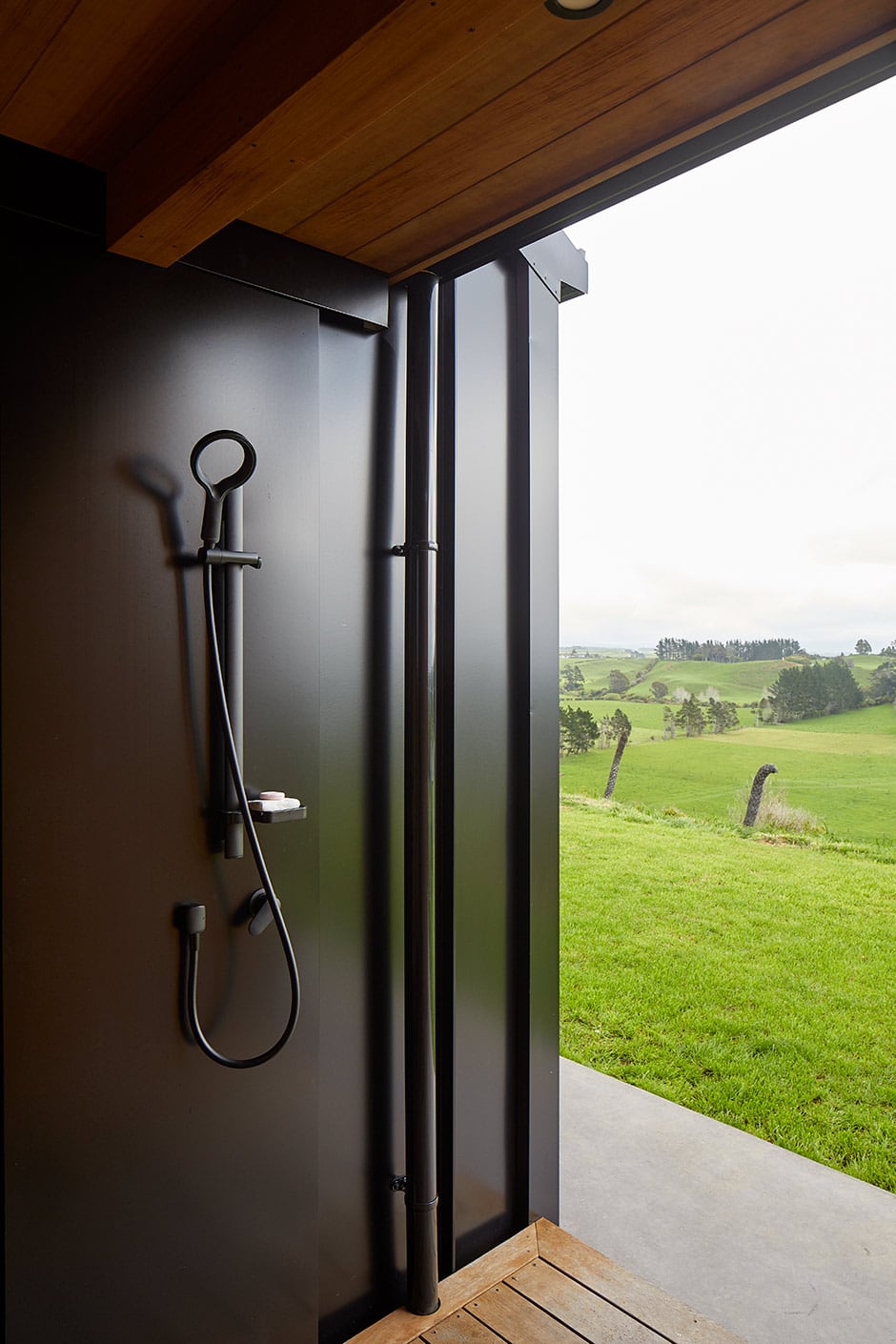 I used to run a lodge in Stratford, and to stay on top of things, I’d try to do 10 windows a day — that was my thing. So I do the same here; it only takes about 15 minutes when you get into it.” High-energy determination dawn till dusk, Natasha says both she and Brenden are “just a bit hyperactive”, something they now love to balance with downtime in the peaceful privacy of their new master suite. A serial-project kind of person, she’s already onto her next — revamping a rental property. But for all her desire to keep creating, she says you’ll find the Hintzs here for a good long while, where the door is always open and the sign on the mat says ‘welcome’. 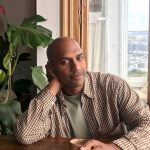 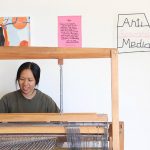