The heart of matters 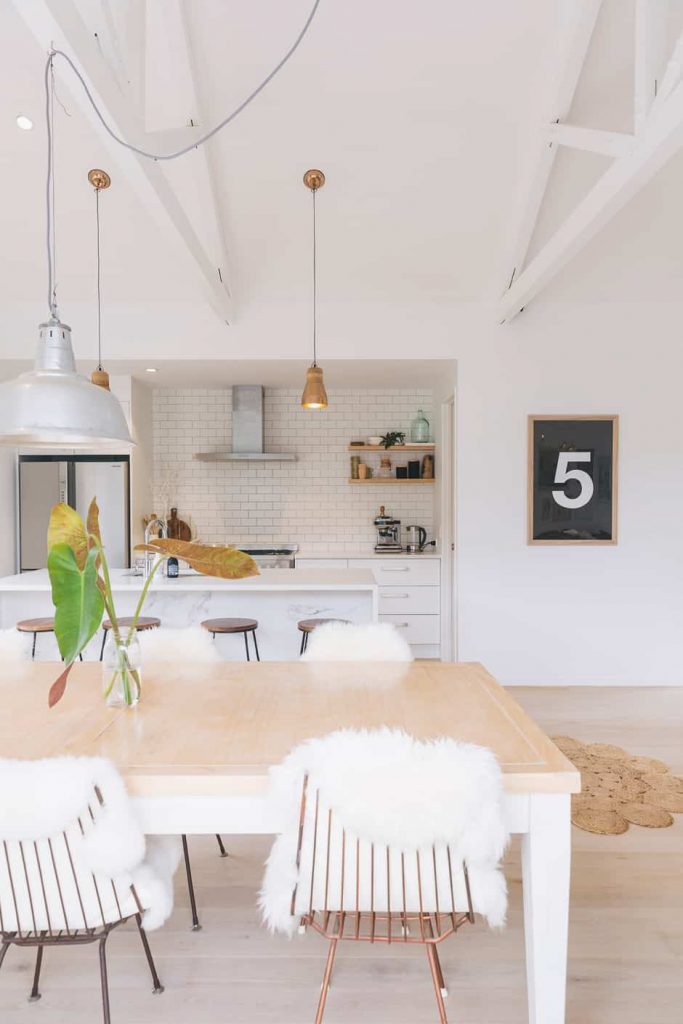 An unforeseen twist led these first-home builders right back to where they belong.

When you marry a carpenter, it’s almost inevitable that you’ll build your own home one day. For newlyweds Clare and Simon Cato, that day came sooner than expected when they found themselves purchasing a piece of land in their coastal home town of Snells Beach.
“Simon has been bursting to construct his own home since the day he became a builder and began making homes for other people, just over a decade ago,” says Clare. “But it was quite by accident that we ended up building a house here.” 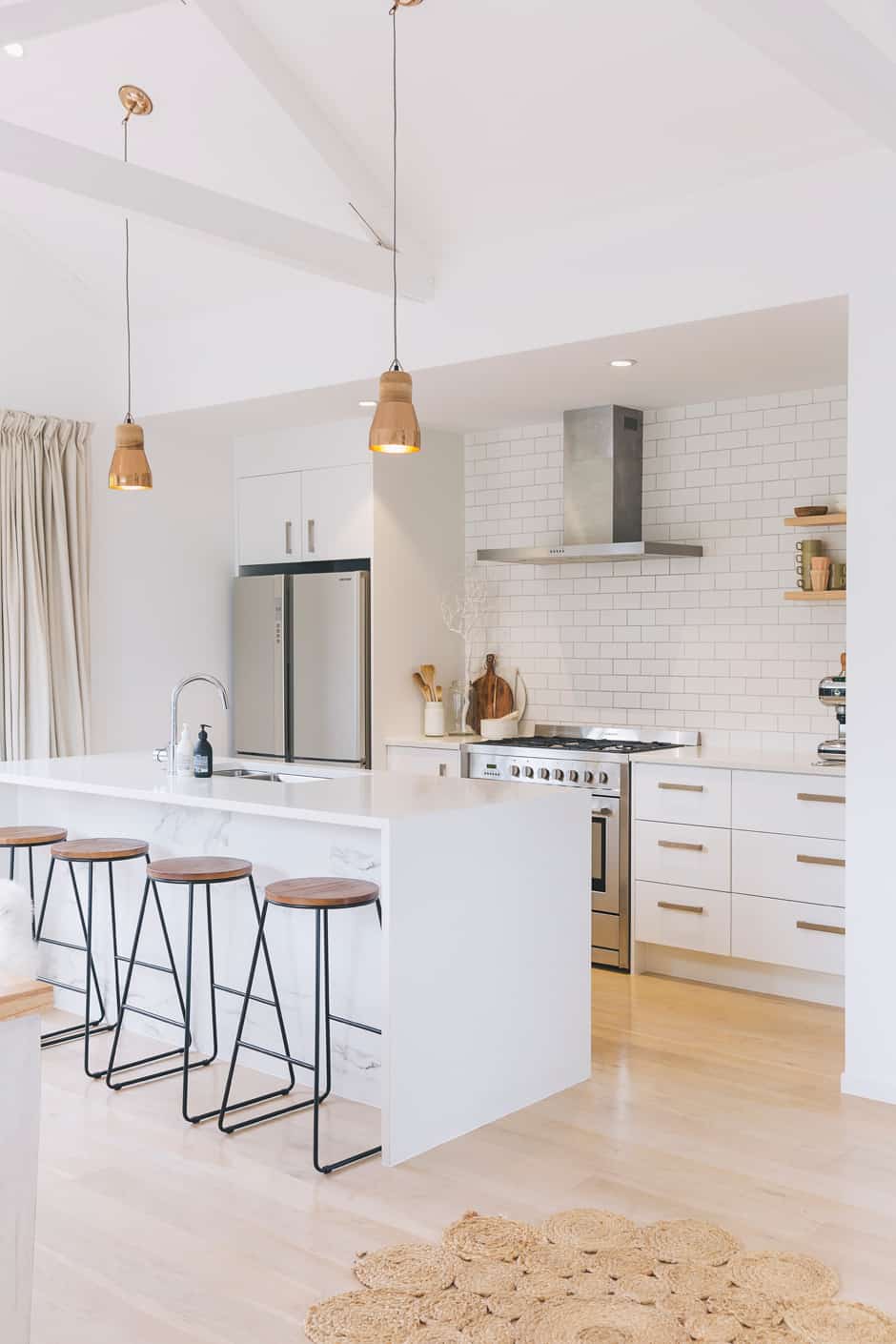 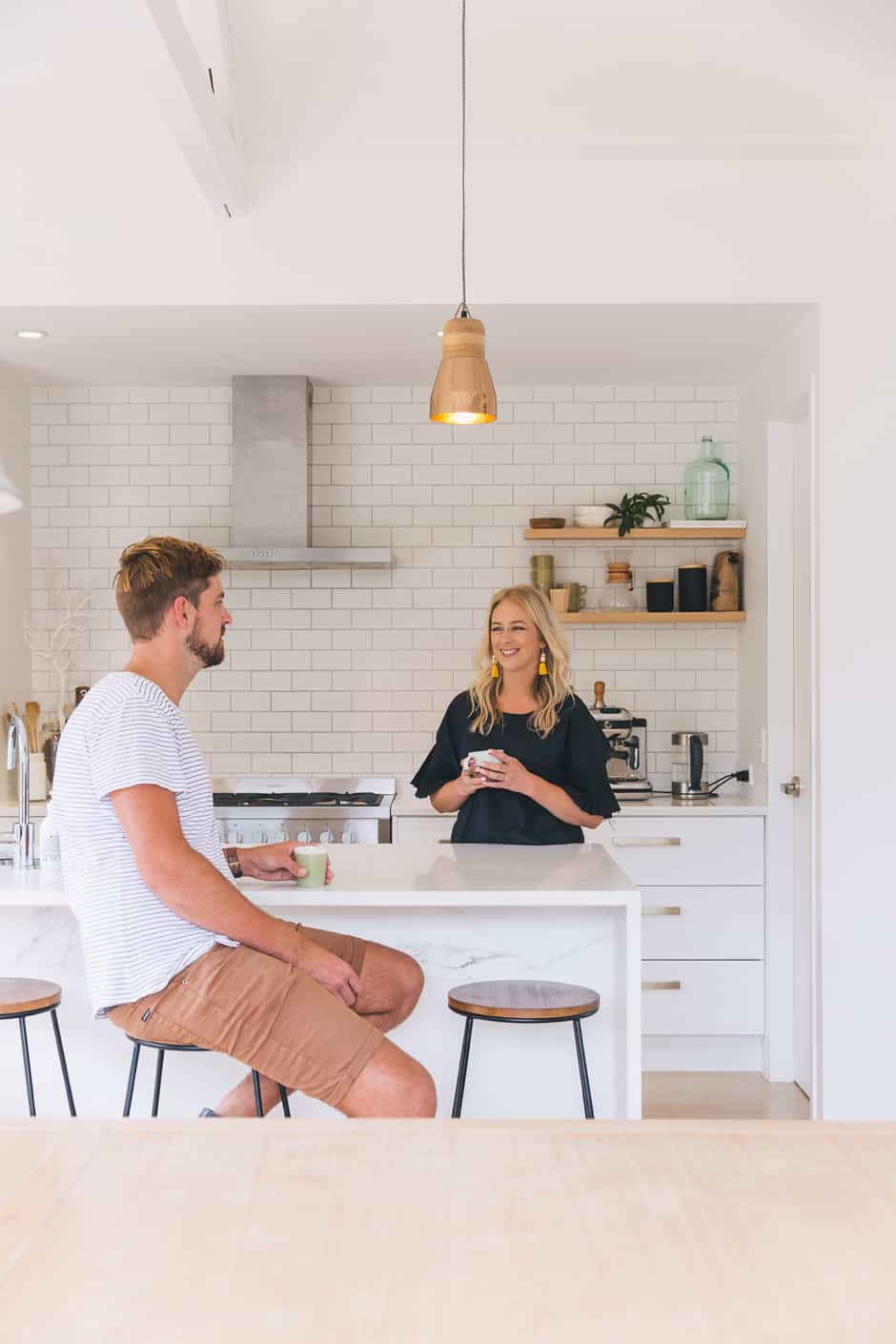 Having grown up in Snells Beach, Simon has always had an affinity with the area. Clare spent her childhood in Taihape, but when her parents sold their farm and moved to Snells Beach during her university years, Cupid stepped in.
“We got married here and lived on Auckland’s North Shore for our first year. Then my mum sadly passed away, which unexpectedly brought us back up to Snells Beach to live with and support my dad and younger sister,” says Clare. “We didn’t have a lot of money, but we knew that if we wanted to get on the property ladder we needed to buy quickly as sections were few and prices were rising.” 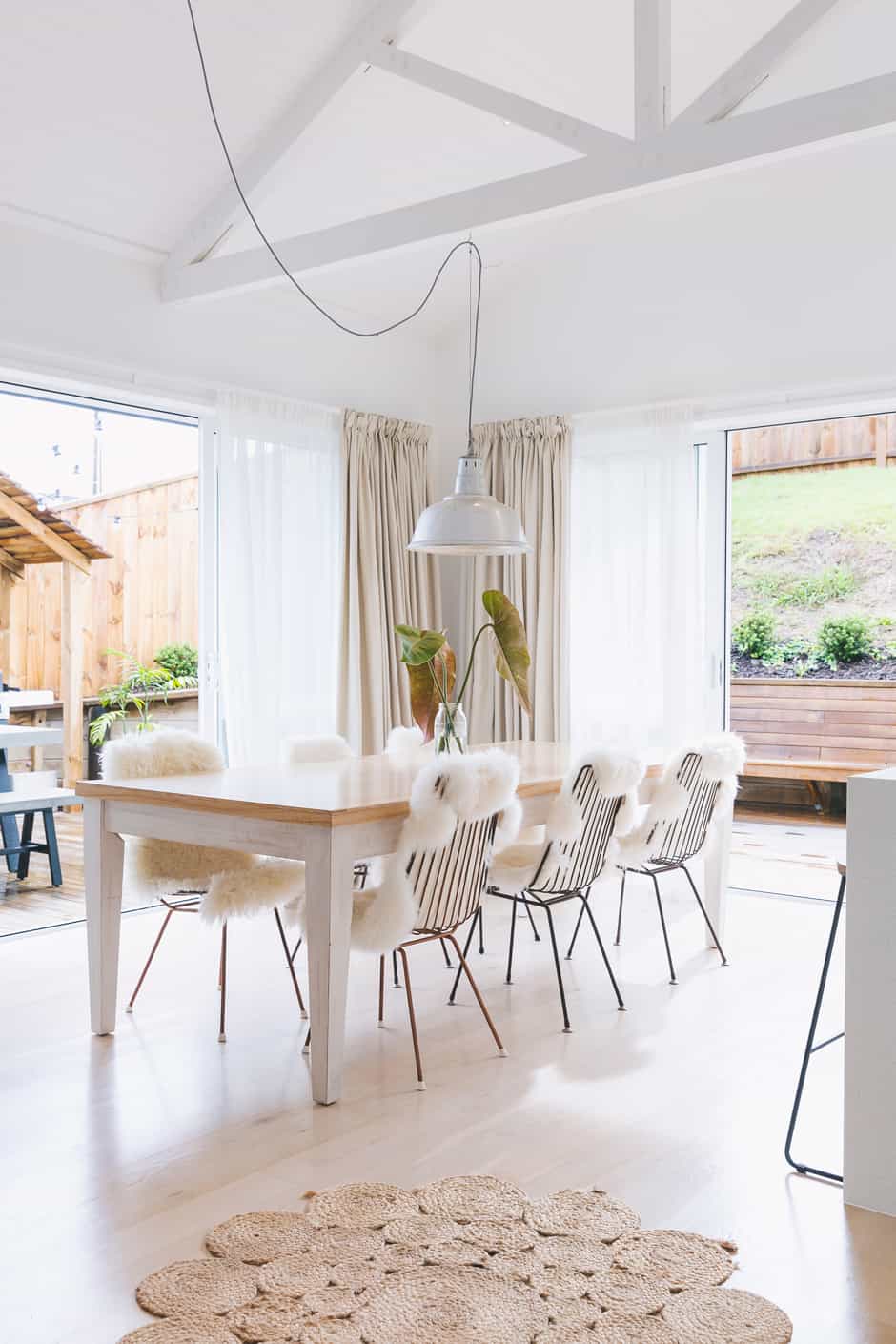 Finding a site that was within their budget and close to their families, they turned their attention to making the very best of their changed circumstances. After drawing plenty of sketches to help them nut out the configuration and aesthetic they wanted for their home, they engaged architectural designer Martin Harnish, who tweaked and polished their drafts. Over the next 14 months, they spent evenings and weekends chipping away at the project, saving their pennies by dossing down in a boat shed.
“After knocking off from our day jobs, we’d head to the site to tile, paint or lay flooring. Dinner was often late-night takeaways, and we’d have to drop in on one of our parents on the way home for a shower, because the boat shed didn’t have hot water,” says Clare. “It was a crazy time, but so rewarding.”
The minute the plumbing was connected at their new place, they moved in. It was still a bare-bones operation at that stage, but one they were happy to finish with hot water on tap and a sound roof over their heads. 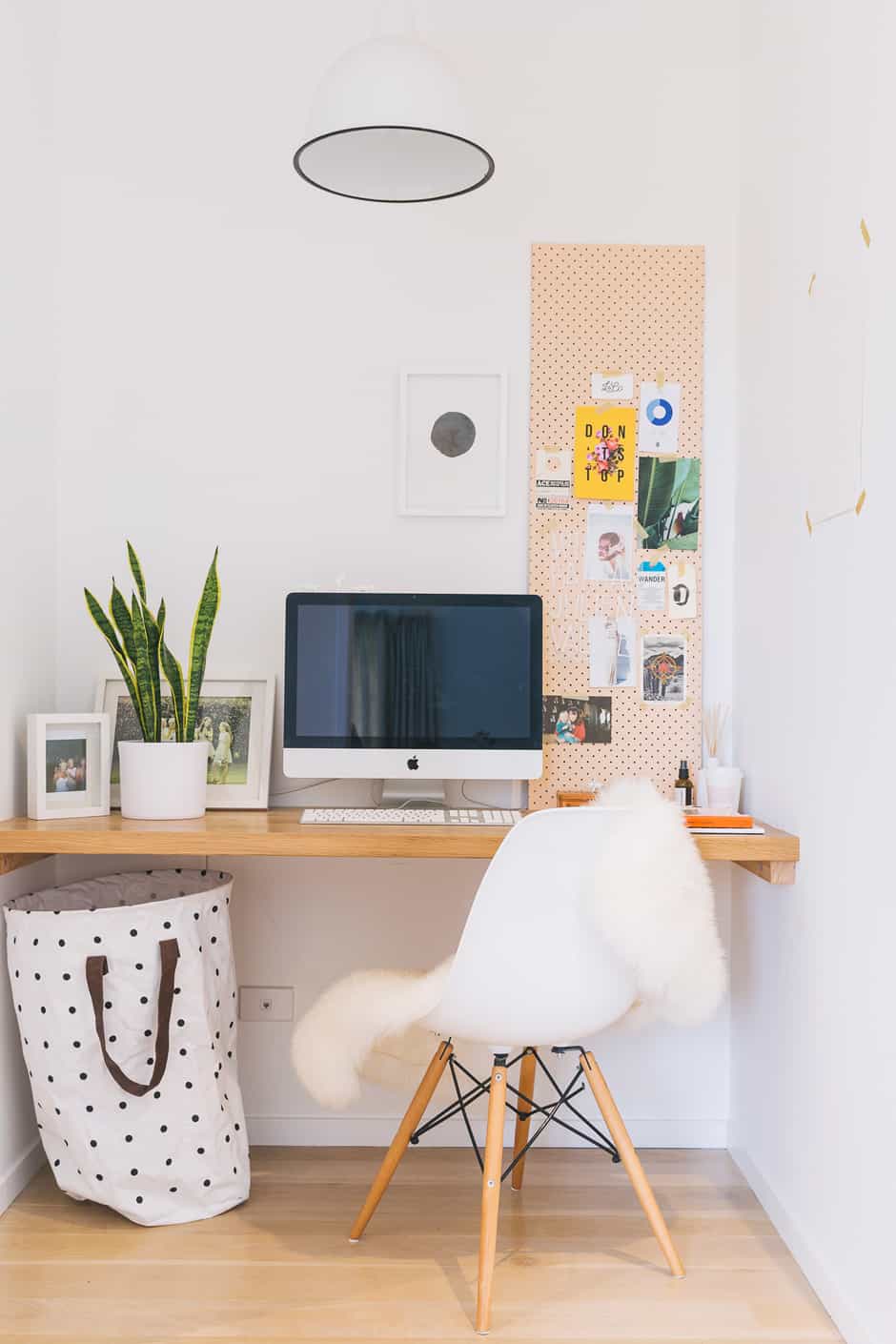 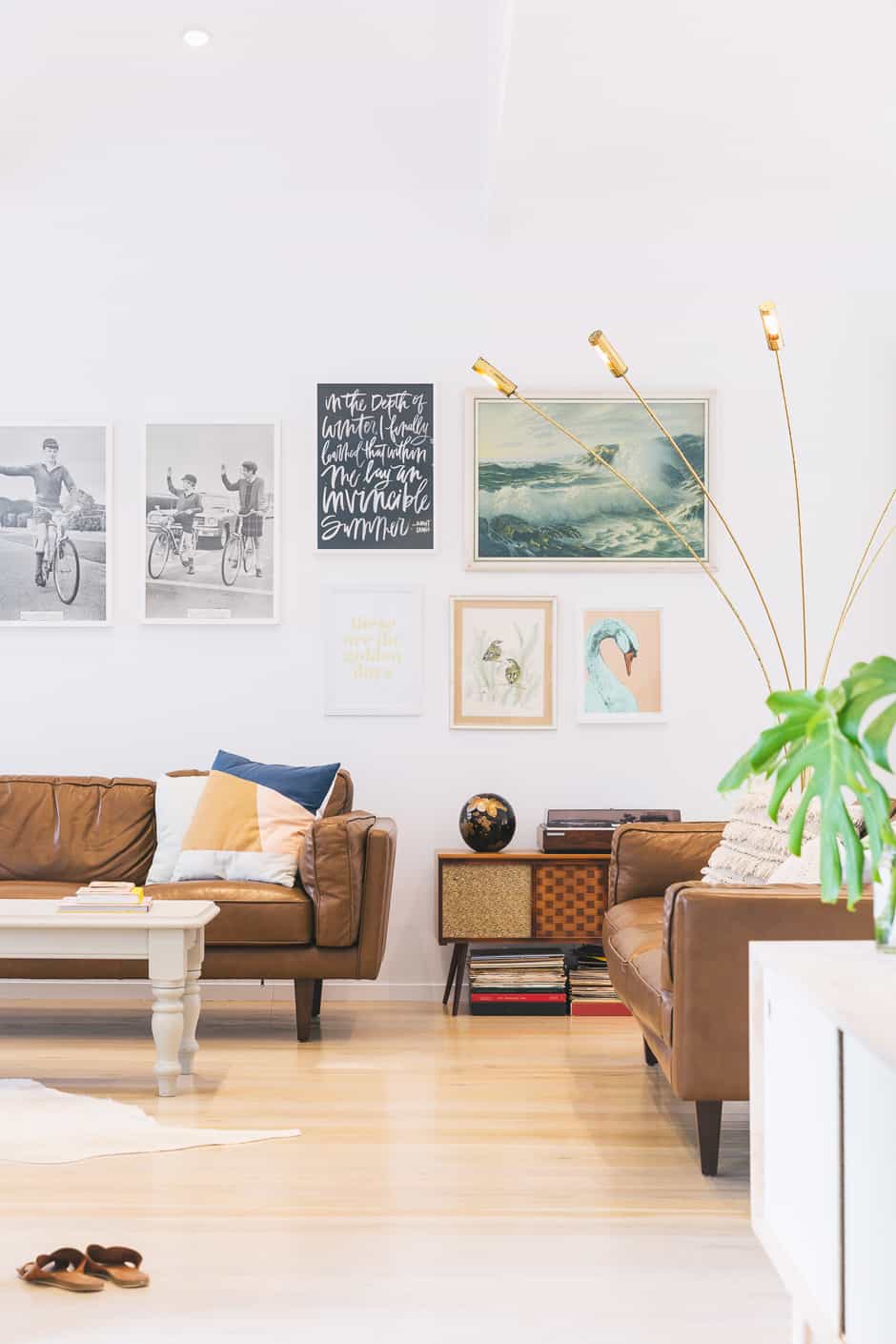 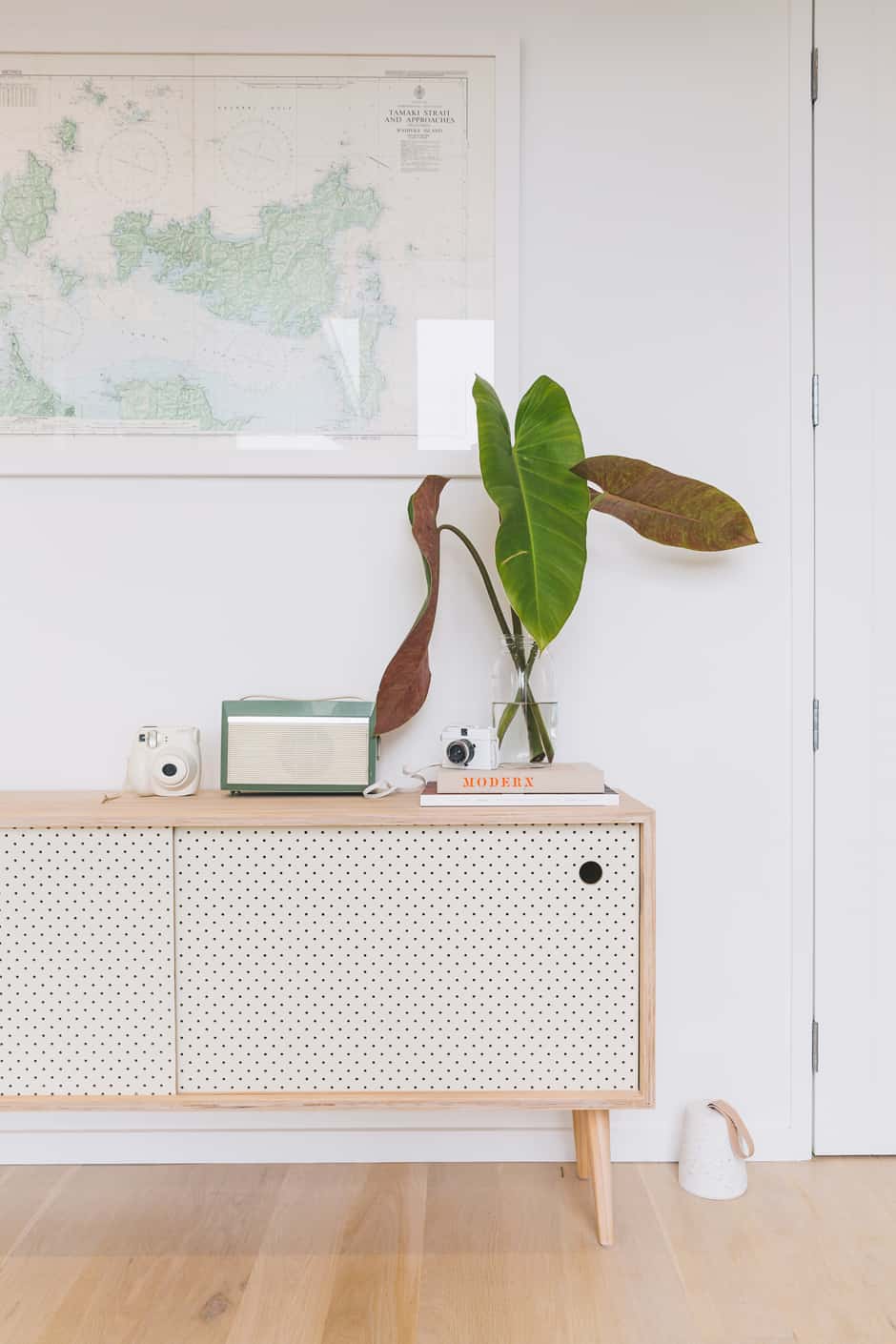 Undertaking such a big project for a first home could have been overwhelming, but Simon’s experience working with his builder father helped, as did the support of other family and friends. “It really gave us a sense of community,” says Clare. “We had friends help us barrow concrete for the foundations, and others up past midnight with us, tiling in the dark.”
To make the most of their steep site, the couple chose a split-level layout, with two pitched-roof pavilions interconnected by the entrance – one housing the open-plan living areas and the other with a guest wing that steps up to the master bedroom, walk-in wardrobe and ensuite. From the outside, this internal transition was cleverly hidden by raising the ceiling in the lower zone to create a continuous external roofline, or as Simon likes to put it: “a house designed for a tall person”. 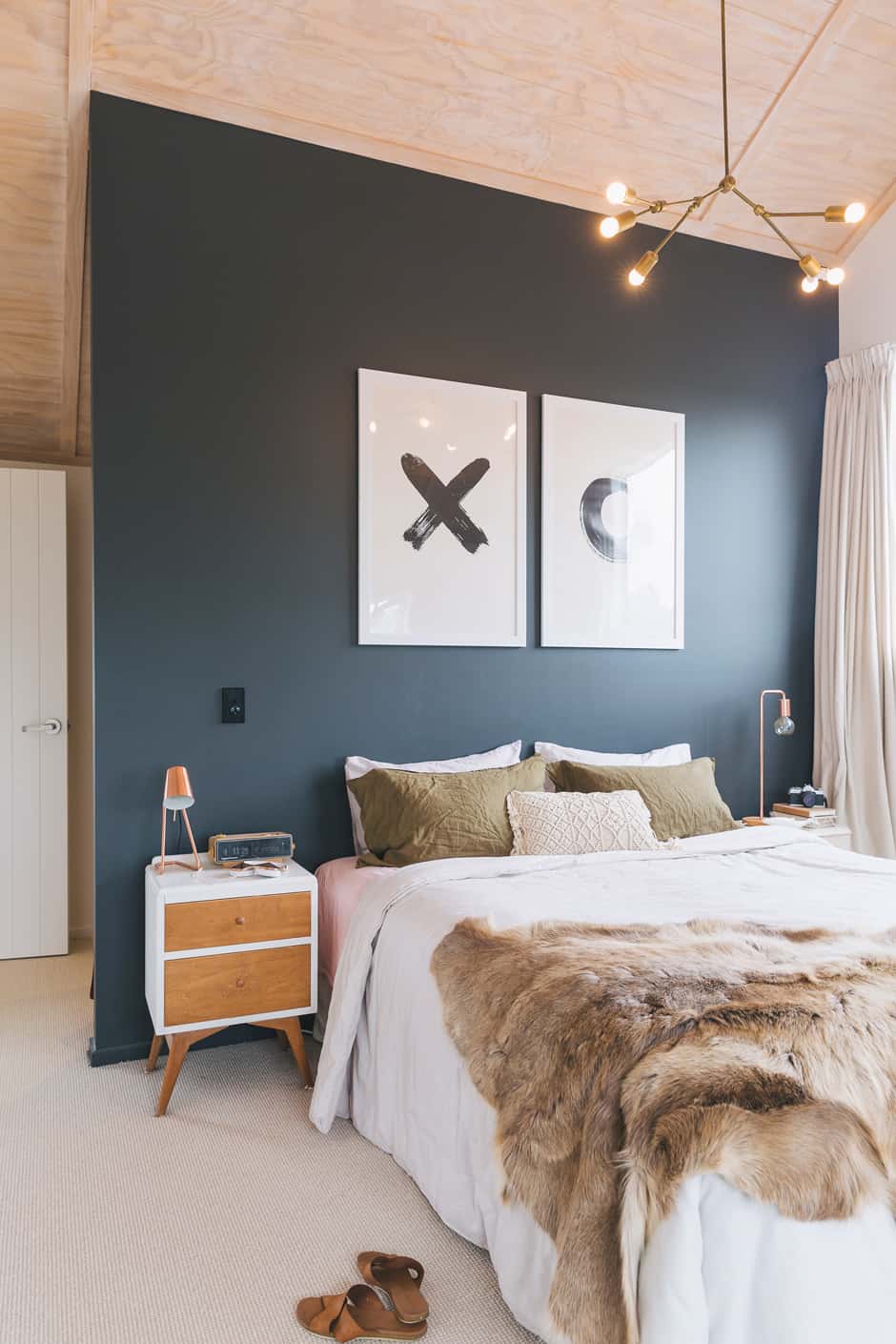 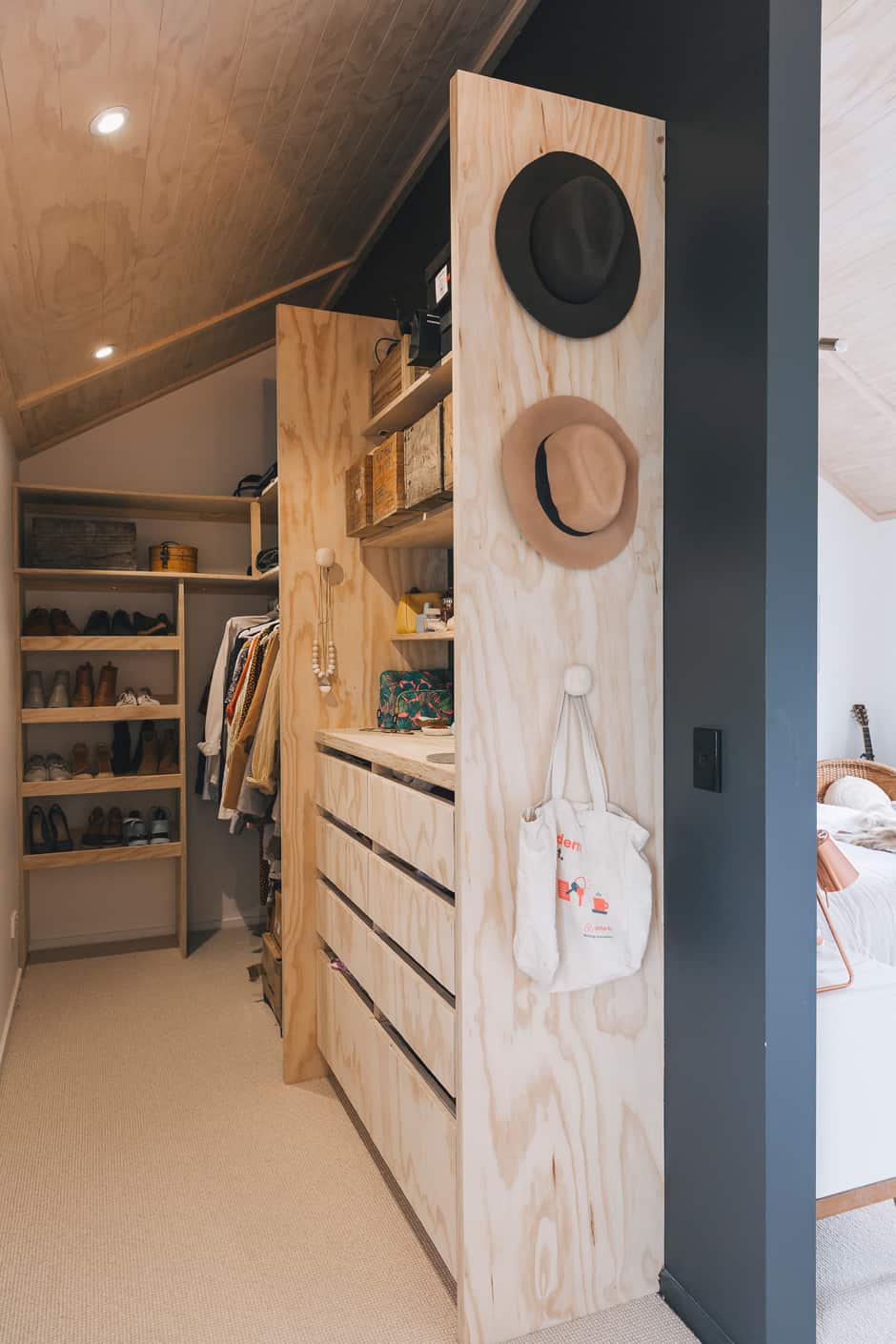 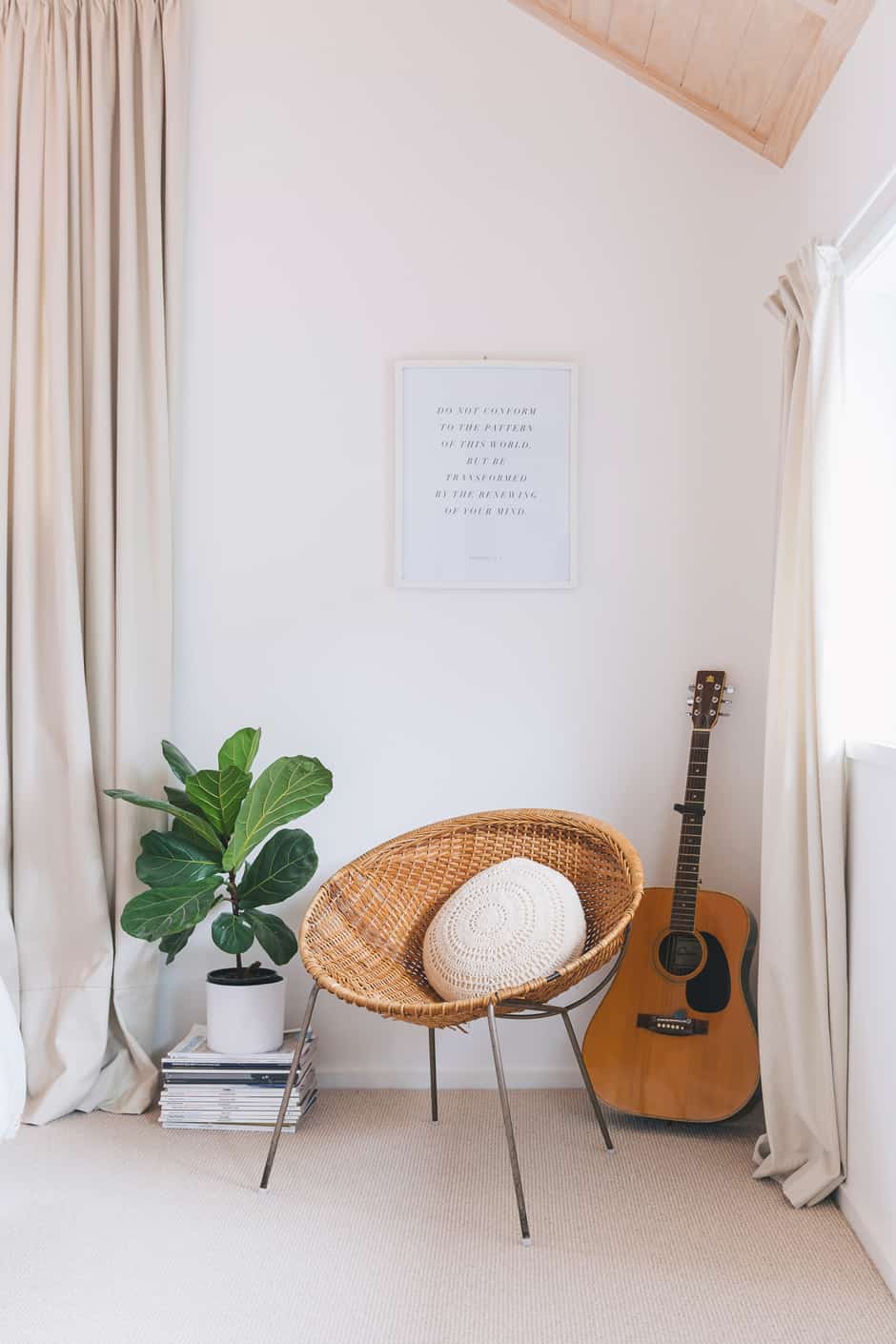 The home’s interior has been a passion project. The Scandi beach-house-style blank canvas with oak floors and pale walls has been enlivened with textural elements such as a grooved ply raked roof, exposed beams and a recycled-brick fireplace. The couple share a love of hunting for vintage pieces such as the gold art deco light in the living room, and Simon was often tasked with additional weekend building projects, such as the ply and chipboard bedheads and the sideboards in the hallway. The house really is ‘them’ through and through. 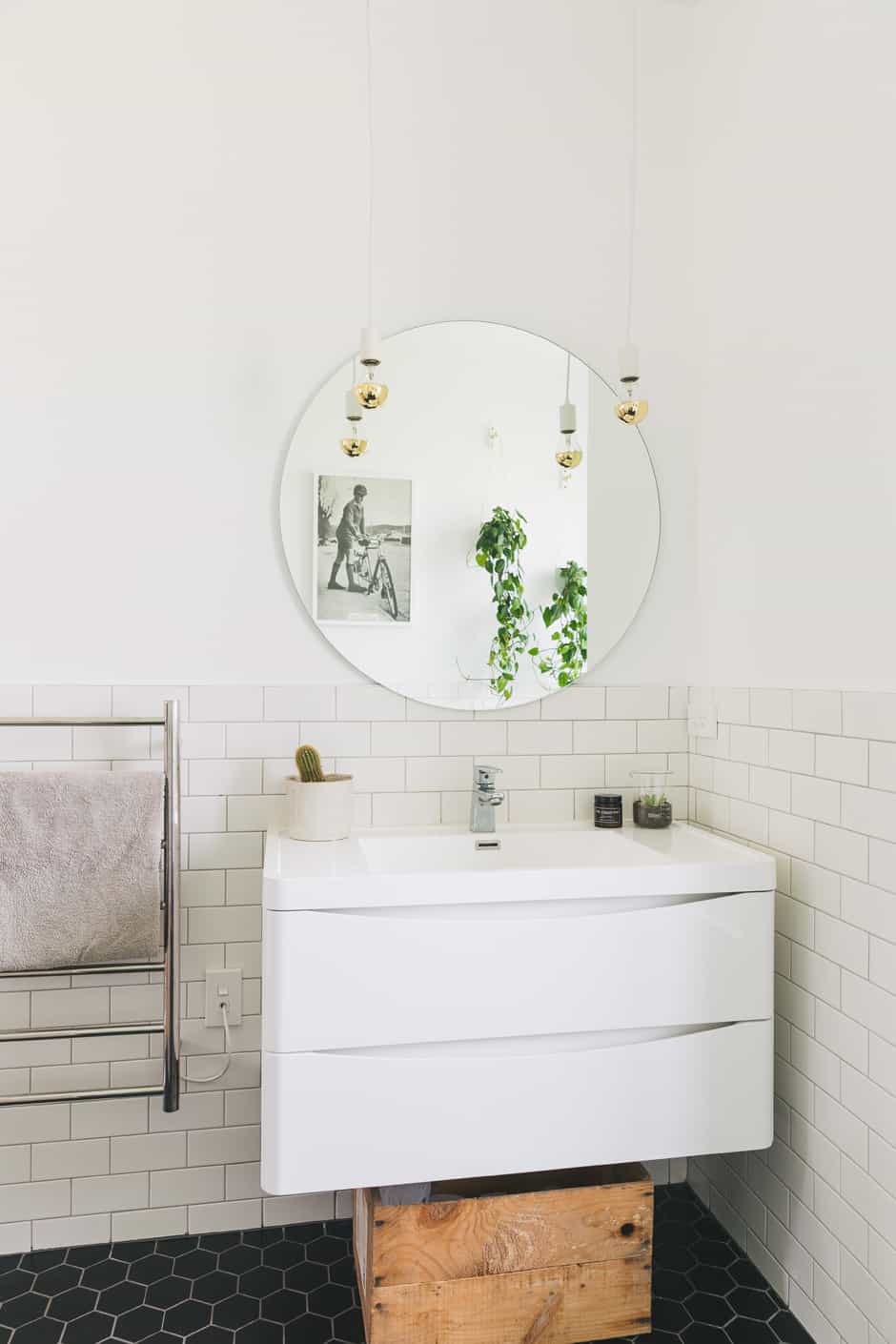 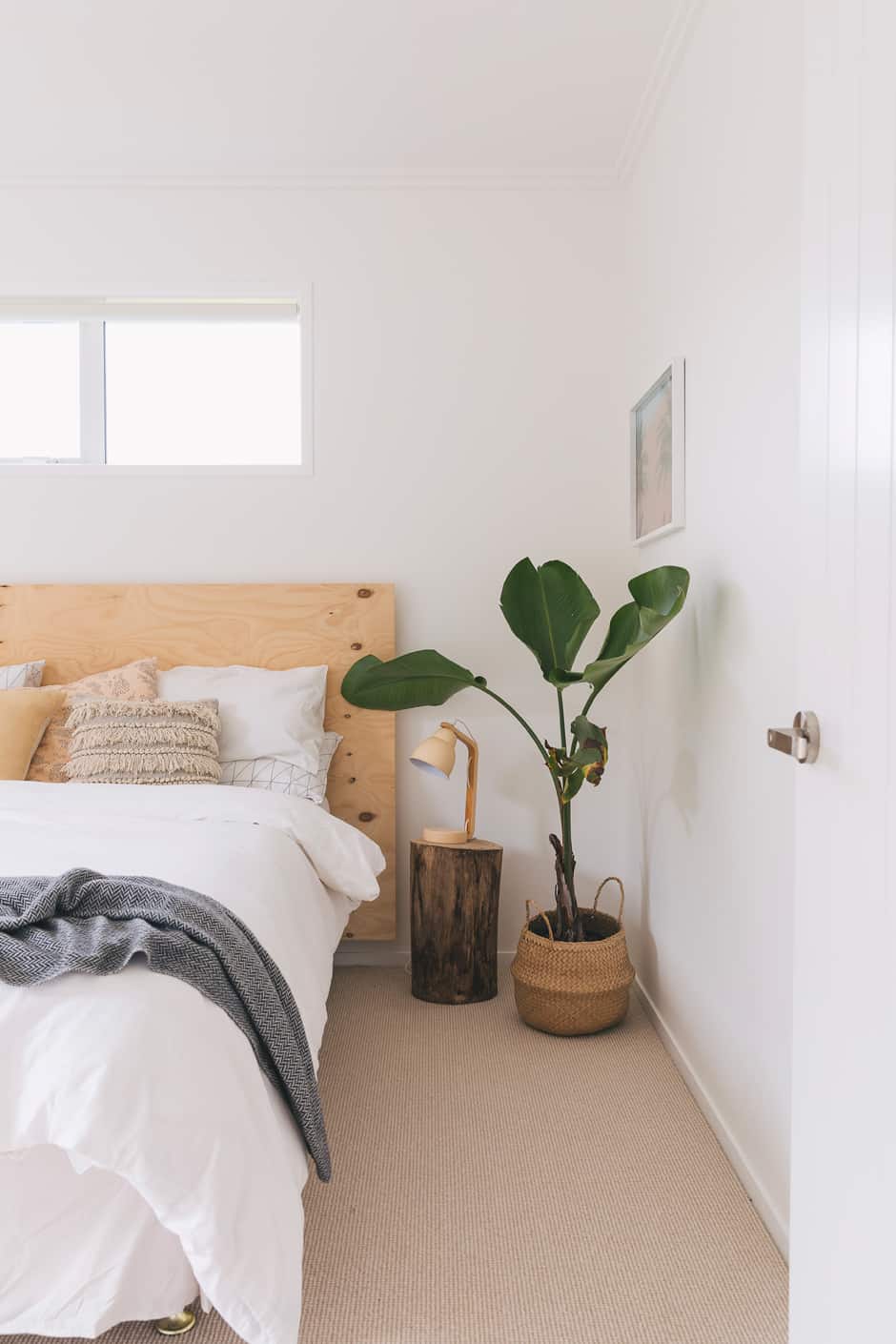 It might not have been the Catos’ initial ambition to build in Snells Beach, but they’re doing a fine job of settling in. “There’s a fantastic community of people here – we’ve made lifetime friends,” says Clare. “The longer we stay, the more we love it.” 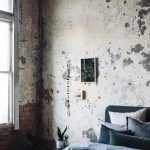