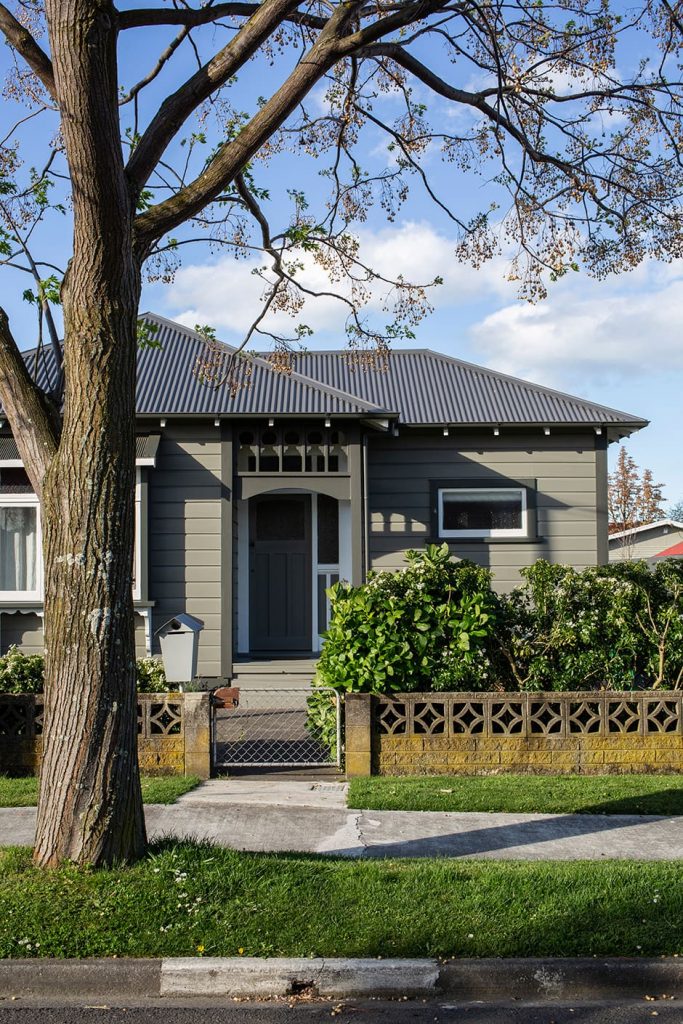 The juggle is real yet she’s done it again, using simple yet effective solutions to create a beautiful and functional family home.

You could roll a ball from one side of this house to the other when Gem Adams and Nathan Speeden moved in. So wonky were the piles, Gem, who was pregnant with their daughter Margot at the time, says, “I’d feel the slope of the floor as I went into the bathroom and almost had to steady myself!”
Add that to a list of laments that included carpet thick with animal hair and ceilings lowered so far they partially concealed the stained-glass clerestory windows, and it presented a bit of a challenge. Despite appearances, though, the Hastings couple had a hunch the circa 1915 villa was actually a lovely old lady — and hunches are kind of their speciality.

“I can’t help but see the potential in something, so I think with houses, where others wouldn’t touch them, I get excited about what they could be,” says Gem. “Nathan and I love beautiful homes but we don’t have the budget to buy them, so we have to think outside the box. We believe that if we want to get to the places we want to get to, we need to take the opportunities that arise, so we just take a leap every time.” 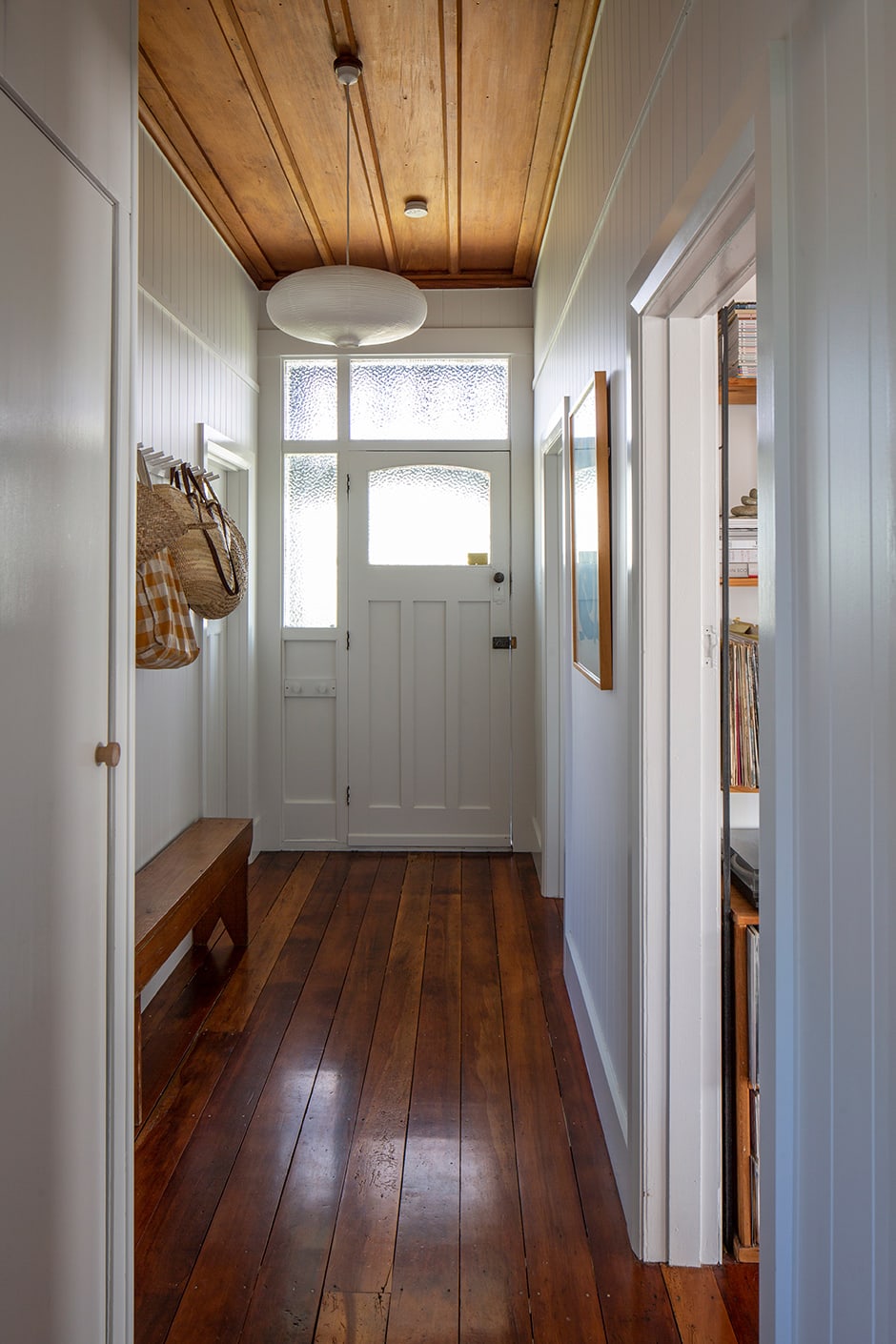 Having already fitted out their Napier homeware store Blackbird Goods and overhauled their first home, the couple arrived at this one ready for another reno they planned to roll out room by room. Four years and two babies on, the old dame has been returned to her former glory — but with a modern sensibility.

With kids (Margot and baby brother Sunny) in the mix, this project was Gem and Nathan’s biggest juggle yet, so they relinquished some of their signature DIY wizardry in favour of employing their builder fathers Steve Adams and Roly Speeden, along with Nathan’s brother Dave, to make the major changes. Instead, the couple took on painting, tiling and other finishing tasks, incorporating their taste for natural colours and materials, and the perfectly imperfect Japanese wabi-sabi approach. 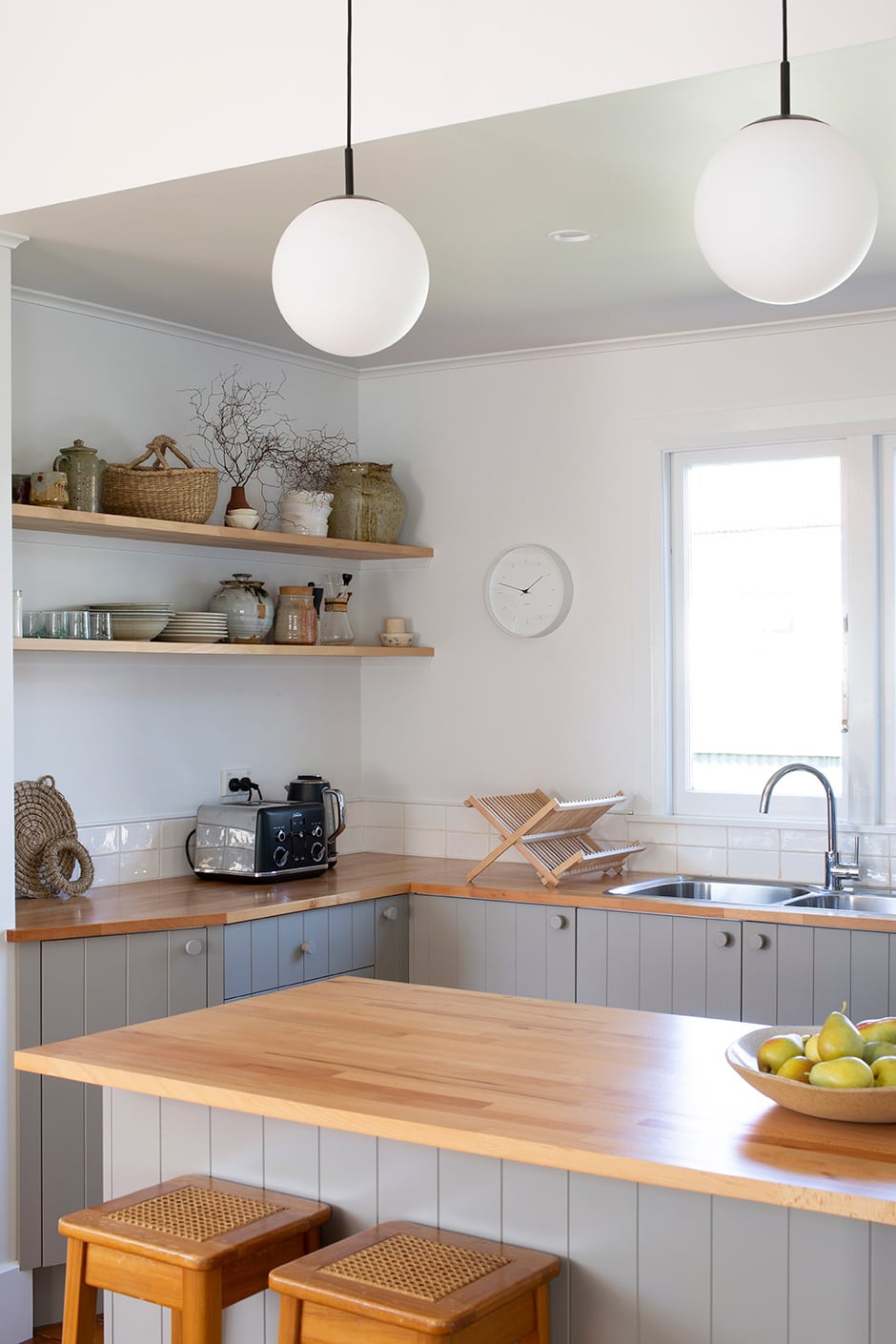 The villa originally had only two bedrooms, so they borrowed a bit from the generous bathroom to create a third sleep space. That gross carpet gone for good, they restored the matai floorboards along with the coffered ceilings, doors, skirting boards and magenta stained-glass windows. Gem dreamed of classic timber countertops, so Steve fabricated cost-effective ones for the kitchen and bathroom using pre-laminated sheets of beech; they go so well with the tongue-and-groove cabinetry he crafted for these rooms and the splashbacks Gem and Nathan created using handmade tiles. The open shelving throughout the house is another simple, chic touch.

Colour-wise, Gem says she did her “typical white-ish-ness”, opting for soft Resene Wan White “because I felt with the heritage aspect of the house it needed to have a bit of warmth to it. I then brought in some colour, including greige Resene Fifty Shades in the kitchen and green Resene Waiouru in the bathroom. Sunny’s room is in nudey pink Resene Rascal and Margot’s is the same, but we did a paint effect on her walls; it changes quite a lot when it’s diluted — you get a much more peachy tone.”

Gem went for bolder colour on the exterior of the house too, without straying from her and Nathan’s preferred tonal look that helps to create an atmosphere of calm. “I tend to view and incorporate colours in a textural way,” she says. “The other parts of the house we added colour to are tongue and groove, because I think it brings more dimension to it than painting it white. 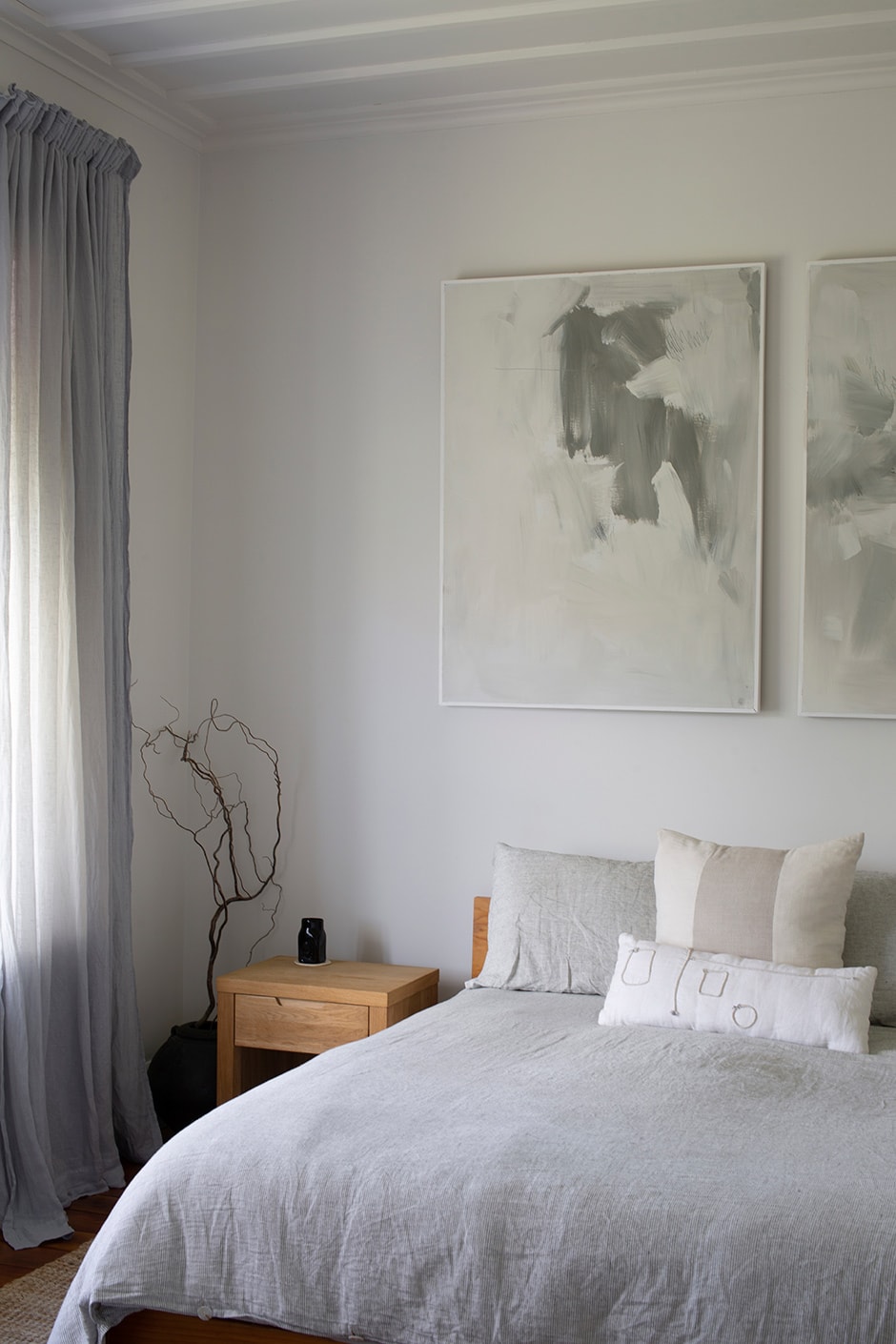 “Renovating a family home with our family has been a cool experience,” she says. “Margot has been part of the process, painting with our hands on the brush to help her and passing Nathan the screwdriver when he put on the bathroom doors. This home has been exactly what we needed for this time in our lives.” Now it’s looking so swish, it’s bittersweet to be leaving this place where they’ve nurtured two newborns, but their next project beckons – a 1984 Ian Burrow design they hope to stay in for the foreseeable and make only minor tweaks to. 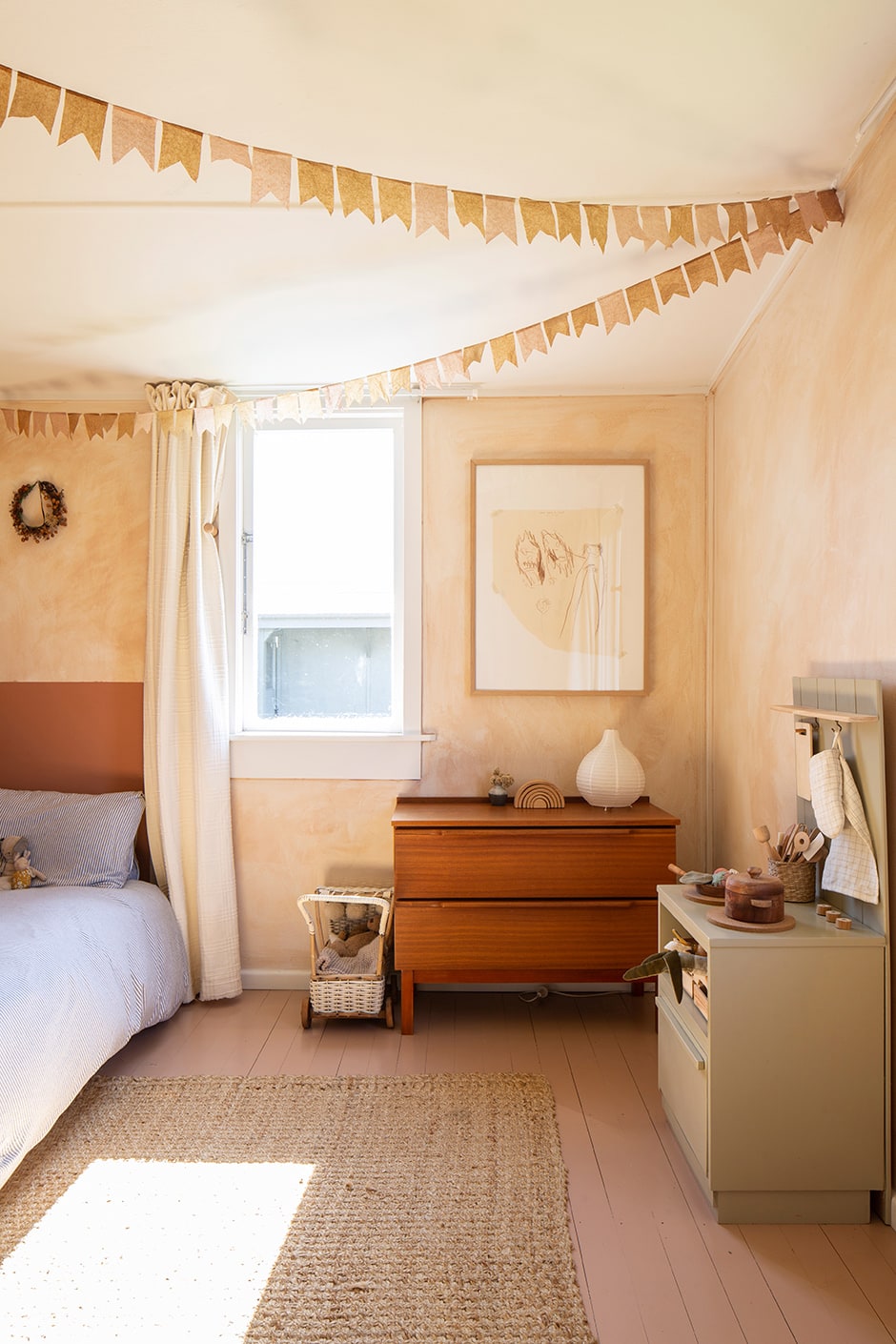 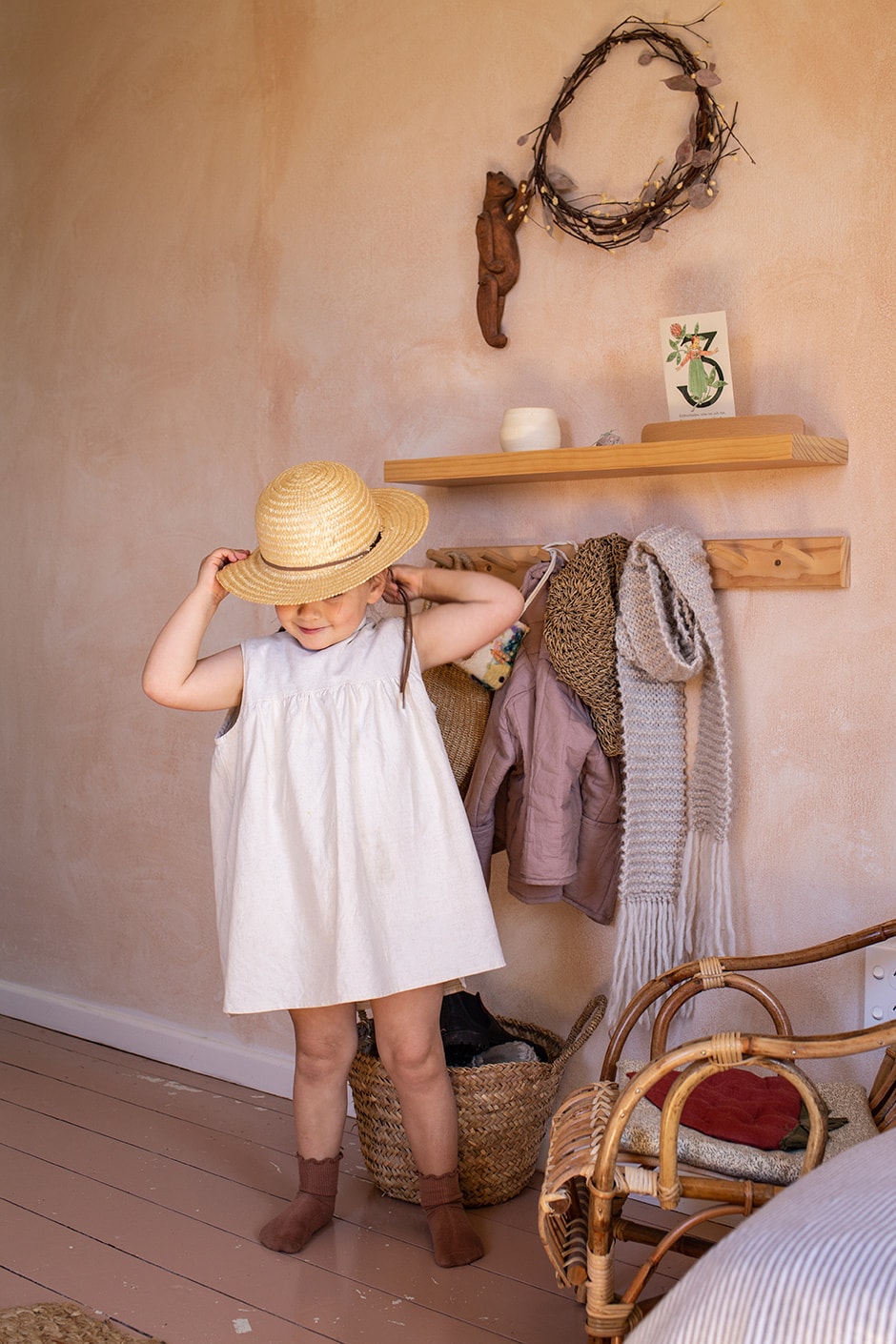 While they’re finding their feet there, they’ll also be fitting out a new Blackbird Goods store in Hastings, secured in their signature fashion. They lost out on the retail space two years ago, but recently, right after learning they’d been outbid on their new home, they were offered a second chance to lease it. Ink still drying on the contract, they got back in the car to find a missed call from their real estate agent… The competing offer on the house had just fallen through and it was theirs if they wanted it.
“Perfect timing is a complete and utter myth — or I believe it is anyway,” says Gem. “We’ve always taken opportunities where we’ve found them.” She’ll be the first to tell you committing to two new projects is a crazy prospect, but what do you do? You see the potential, and take the leap. 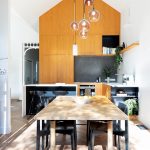 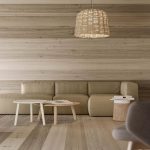