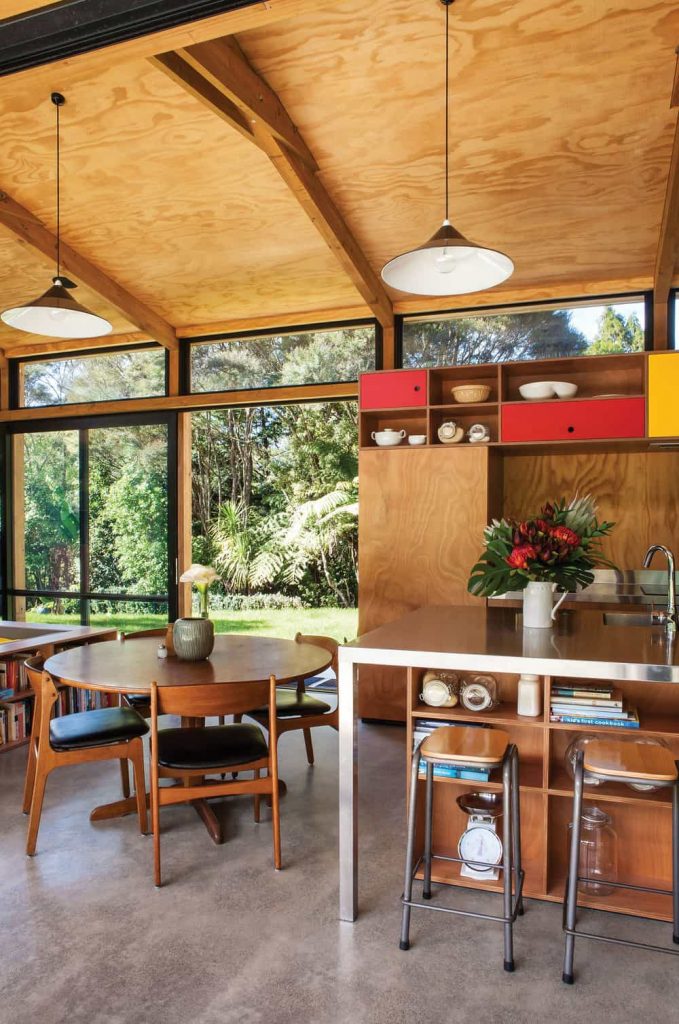 An extended Auckland family have worked with their architects to bring a specific brief to life: the creation of two homes on one site that work together, while each affording their own separate enjoyment of the surrounding land.

Building a new home can be an arduous task – and finding the right piece of land to build it on can be even more trying. But when Mark and Susie Easterbrook came across an idyllic section in West Auckland it was love at first site. “We had made the decision to move to Titirangi from Mt Albert and build,” explains Mark. “And, I’m slightly embarrassed to say, we fell for the first piece of land we visited!”

The first decision very easily out of the way, the Easterbrooks moved to the second – which architect should they choose to help them with their site-specific build? They dreamt of bringing up their boys Hunter (10) and Jake (5) in a home that would take advantage of the surrounding environment – but, as Jake has been diagnosed with autism, they also required a second house for Susie’s mother and stepfather who were moving with them to help out.

“I have several friends who are architects, but I didn’t want to work with any of them in case things went wrong,” Mark laughs. So, after consulting said friends, it was decided that Tim Dorrington of DAA would be a good fit for what they had in mind.

As creative director at boutique design and advertising agency Goodfolk, Mark had some strong ideas for the house design – but this wasn’t a problem for Tim. “I didn’t want to be an interfering client, but I also had my own thoughts,” Mark says. “Luckily, Tim and I were on the same wavelength with most things. I’d like to think my contributions to the design process had a positive impact – hopefully Tim agrees!” 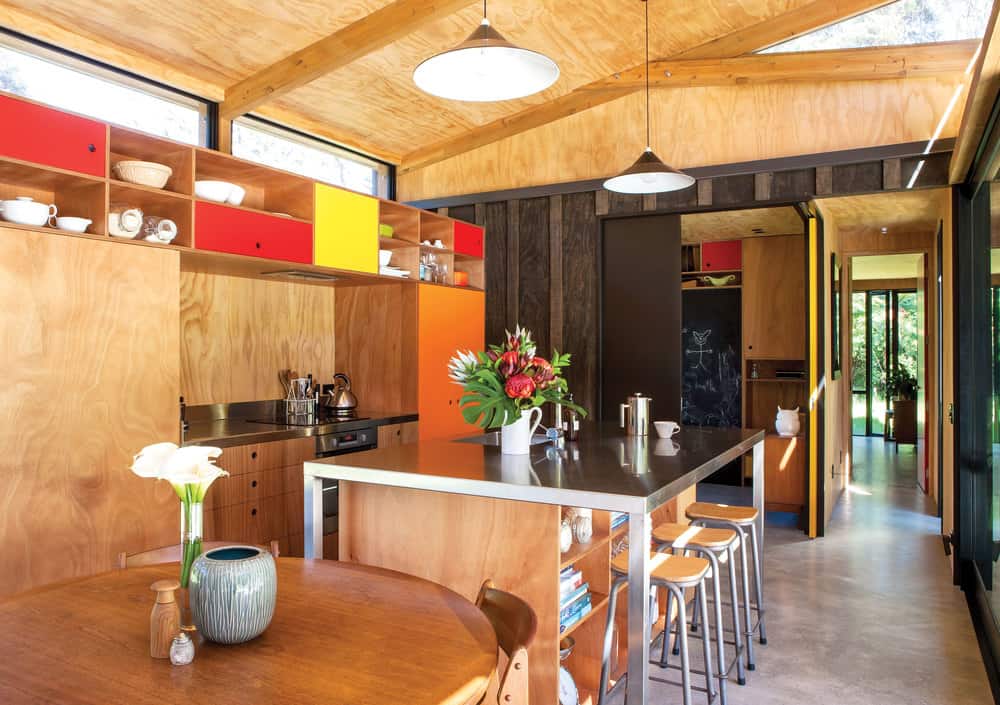 The design team – Tim and his colleague Marie-Claire Henderson – set about creating a pair of buildings, compact in size, with forms inspired by the simple structure of a shed and a tent. But, although aesthetics were important, something else trumped them.

“The need for privacy was the major driving factor for the placement and orientation of the two dwellings on the site,” says Marie-Claire, who was responsible for the finer details of the design. “It is evident from the physical closeness of the buildings that they operate as an extended family unit, but there are no windows which look from one house into the other. The offset and 15-degree change in orientation also means that neither house stares directly out at the walls of the other, but rather each gets its own views of the site and surrounding bush.” 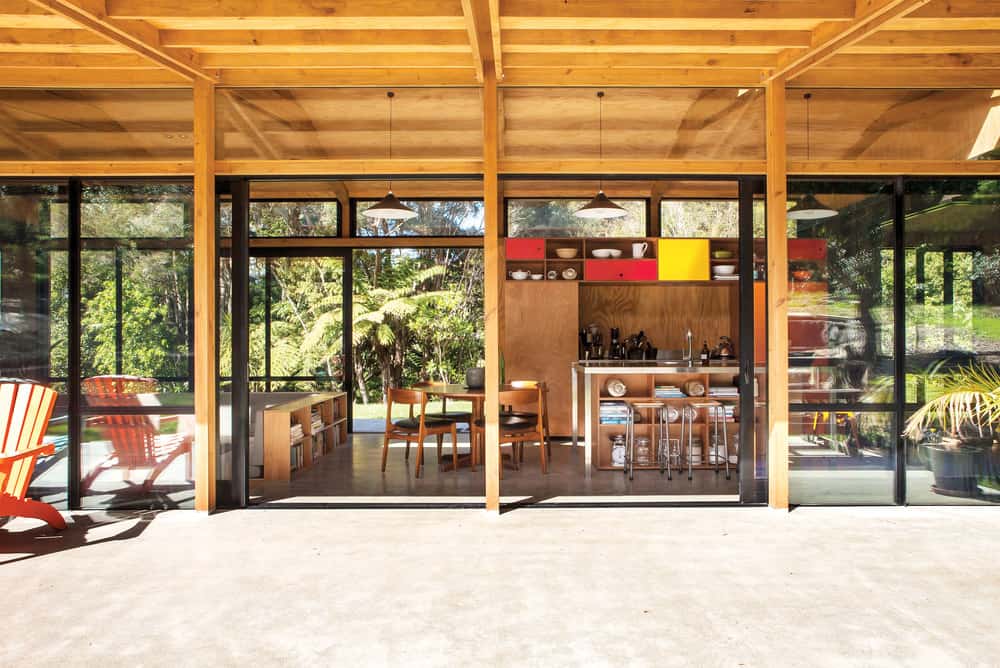 The end result is impressive, in the most unassuming of ways. On approach from the sweeping driveway, the main home appears humble in structure. But on entering, you’re welcomed by a great sense of space as the centralised living area opens on both sides onto lawns and an outdoor living area.

Flanked on either side by bedrooms and bathrooms, for Mark and Susie at one end, with the kids’ rooms at the other, the spaces are all colour-coded. Mark explains: “We used yellow for the boys’ rooms, since they’re the sunshine in the family; orange for the front door, because it’s warm and inviting; turquoise for the bathrooms and laundry, to signify water; and red for the master bedroom – because if it’s closed, it means ‘No entry’!” 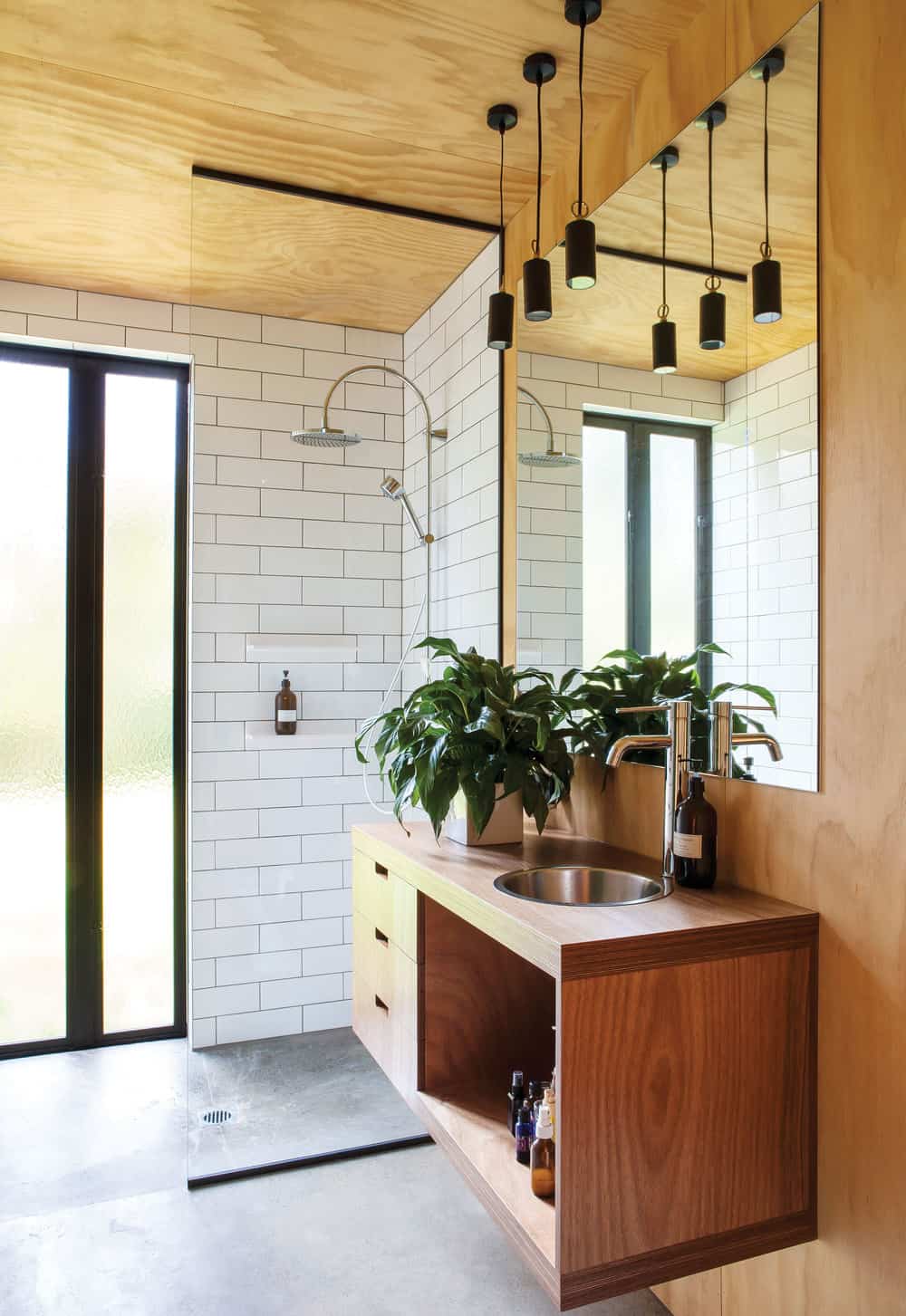 These pops of colour work well with the rich, timber-oriented palette of materials – plywood, aluminium joinery and concrete floors giving the house a bach-in-the-bush feel. This is accentuated by the Glulam beams that frame the living space, and floor-to-ceiling glass looking out to the established fruit trees and natives beyond – the perfect spot for the boys
to adventure.

Regardless of whether they’re playing outside or in, clever planning has provided plenty of space for varied family activities. While the footprint is only a modest 120 square metres, and the main living space four metres wide, it efficiently contains an open-plan kitchen and dining area, along with a drop-down sunken lounge. It is wrapped on
two sides by low in-built shelves full of books and games. And, with the TV tucked away behind more in-built cabinetry, you can easily imagine nights spent reading around the pot-belly fire in this modern take on a conversation pit. 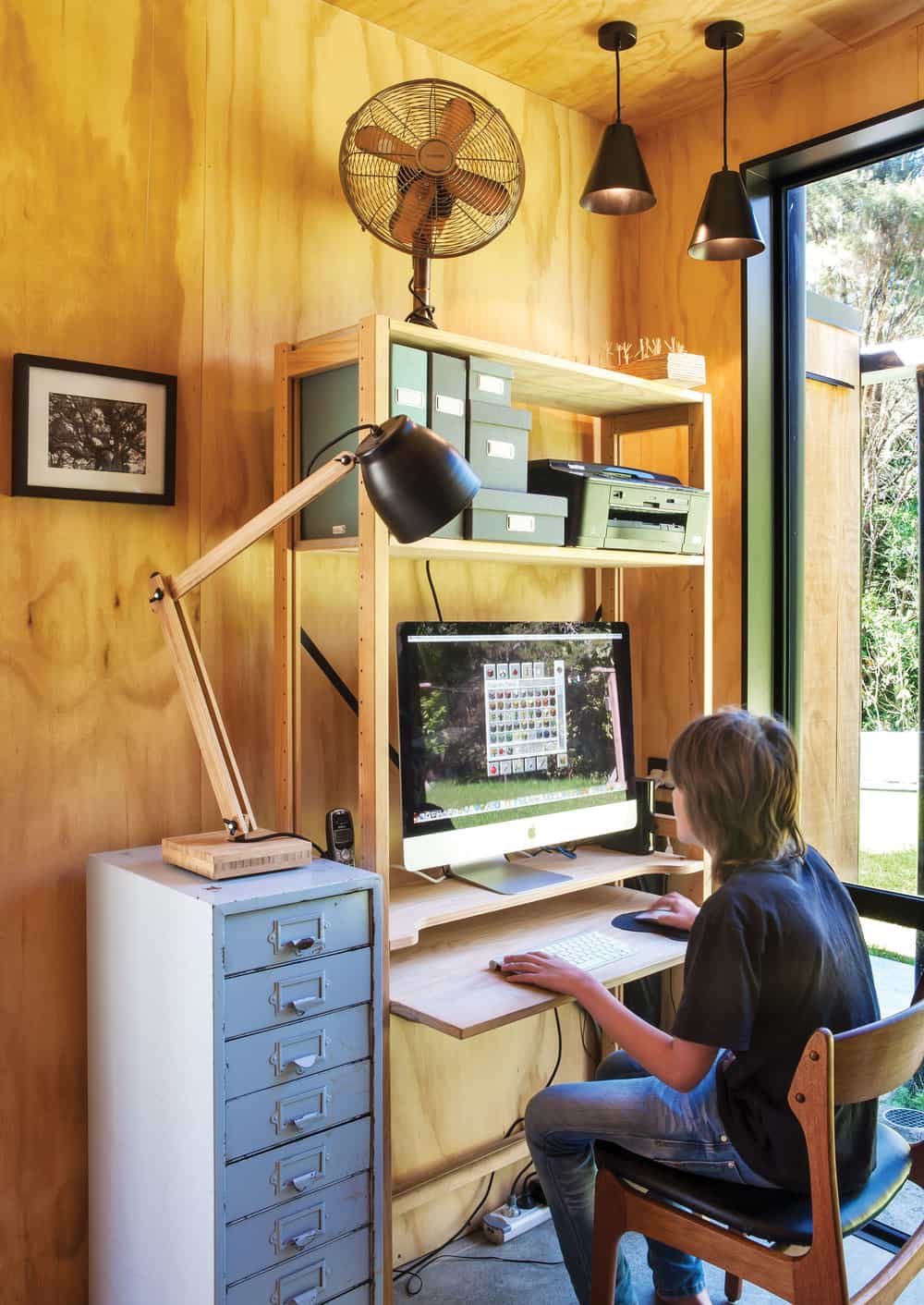 It all just works. After all, a good home is one that can comfortably accommodate not only family life, but those the family enjoys sharing it with. “We were invited back for the housewarming and it was fantastic to see all of these social spaces working beautifully, and everyone enjoying being in them,” says Marie-Claire. Job done – extremely well. 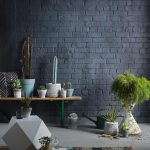 NextOne of the family 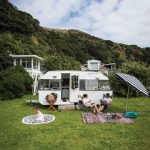