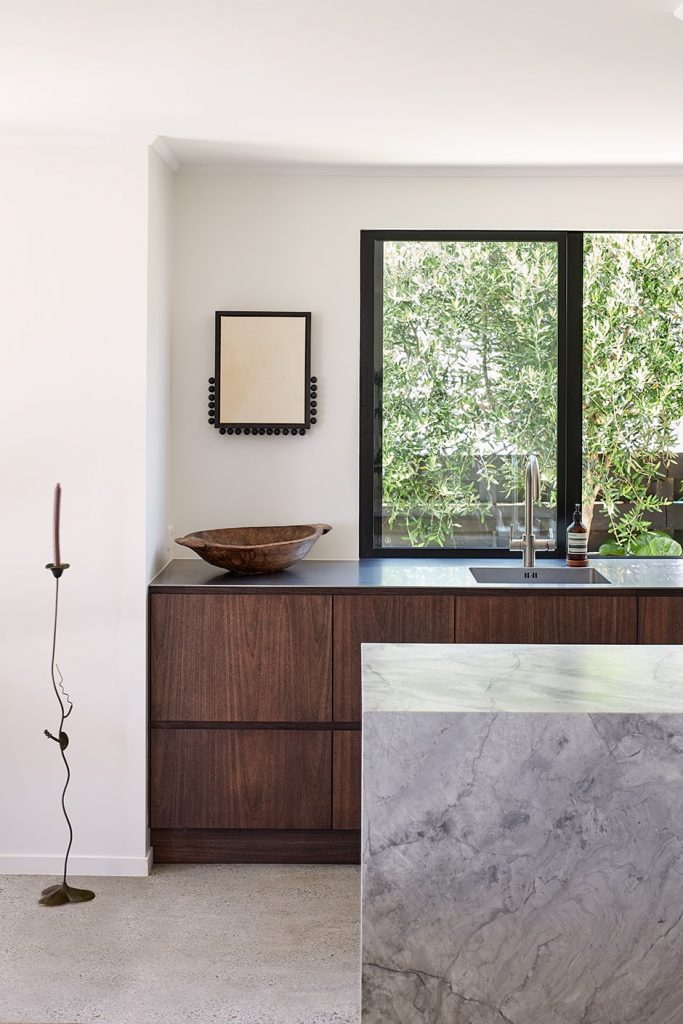 Just like her coveted clothing, her renovated family abode is imbued with a laidback-luxe mood.

When fashion designer Juliet Souter of womenswear label Marle and her husband Justin bought their first place together, they didn’t think they’d be able to make it their home. The couple’s lives were centred in Auckland at the time, so they considered the two-storey ’70s brick-and-tile townhouse they found in Mt Maunganui an investment, its solid bones, elevated site and location a stone’s throw from the beach stacking up to form a promising purchase.

Juggling two new businesses (Justin is co- founder of both Marle and fashion distribution agency The Market) with the arrival of their daughter Vita (now 7) saw life in the City of Sails become ever more hectic, however; so after some campaigning from Justin, Juliet ended up being convinced to give the Mount and its slower pace a go. “Justin grew up here and had always hoped to move home,” says Juliet. “I’ve been holidaying here since I was young and have always loved the area, but I wasn’t sold on the move because all of my family and friends were in Auckland. We made a deal to give it 18 months, then those months came and went and we didn’t even discuss it. It felt like home pretty quickly.” 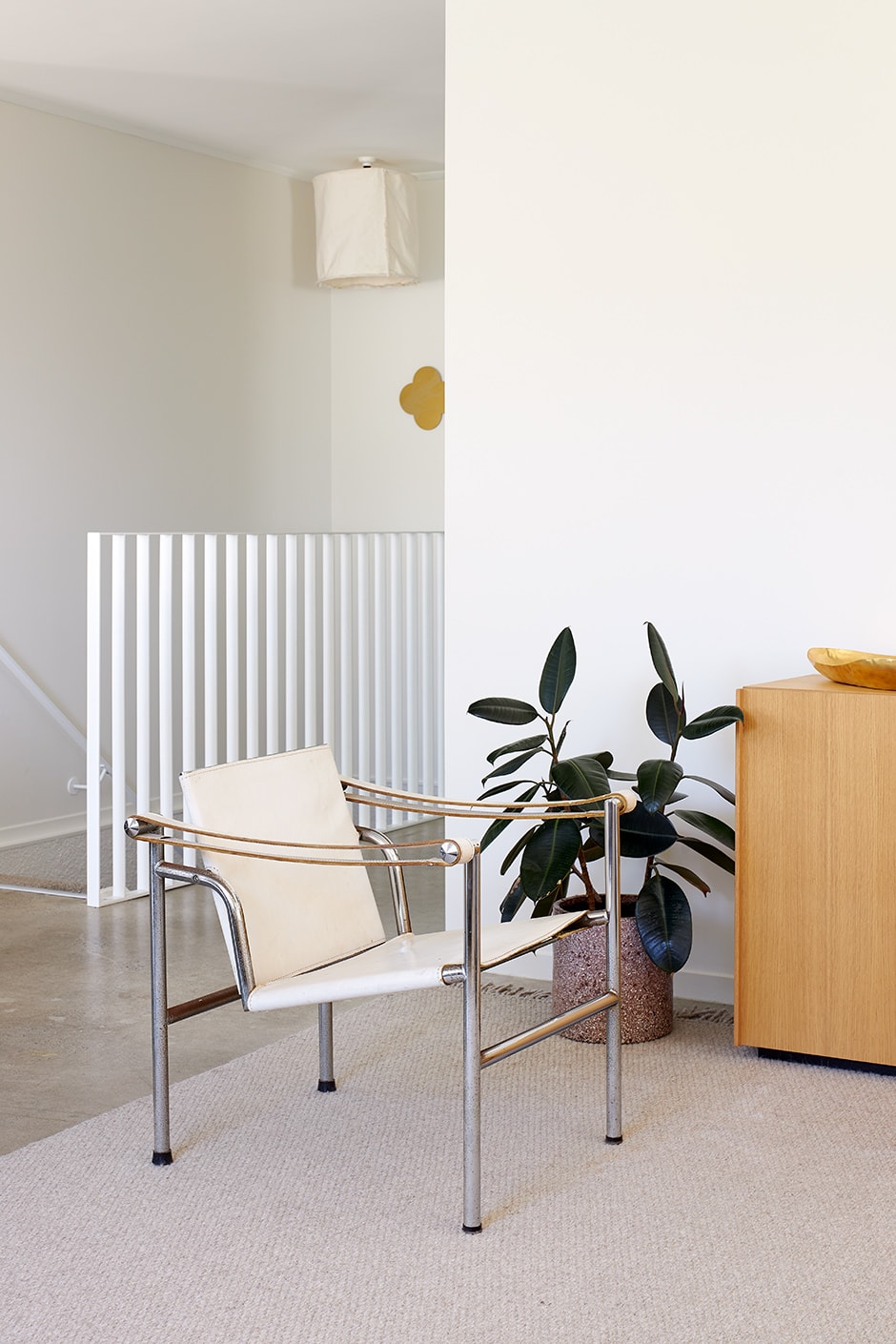 Key to creating a happy new base was turning the rental property into one better suited to family life. “The house was rented out when we moved down, so for our first few months in the Bay of Plenty, we stayed with Justin’s parents,” says Juliet. “Then, once our tenants were gone, we gave ourselves about three weeks to complete a whirlwind initial reno. When I look back, it’s crazy to think how much we achieved in that time, including removing walls, updating the bathroom and adding a third bedroom downstairs.” 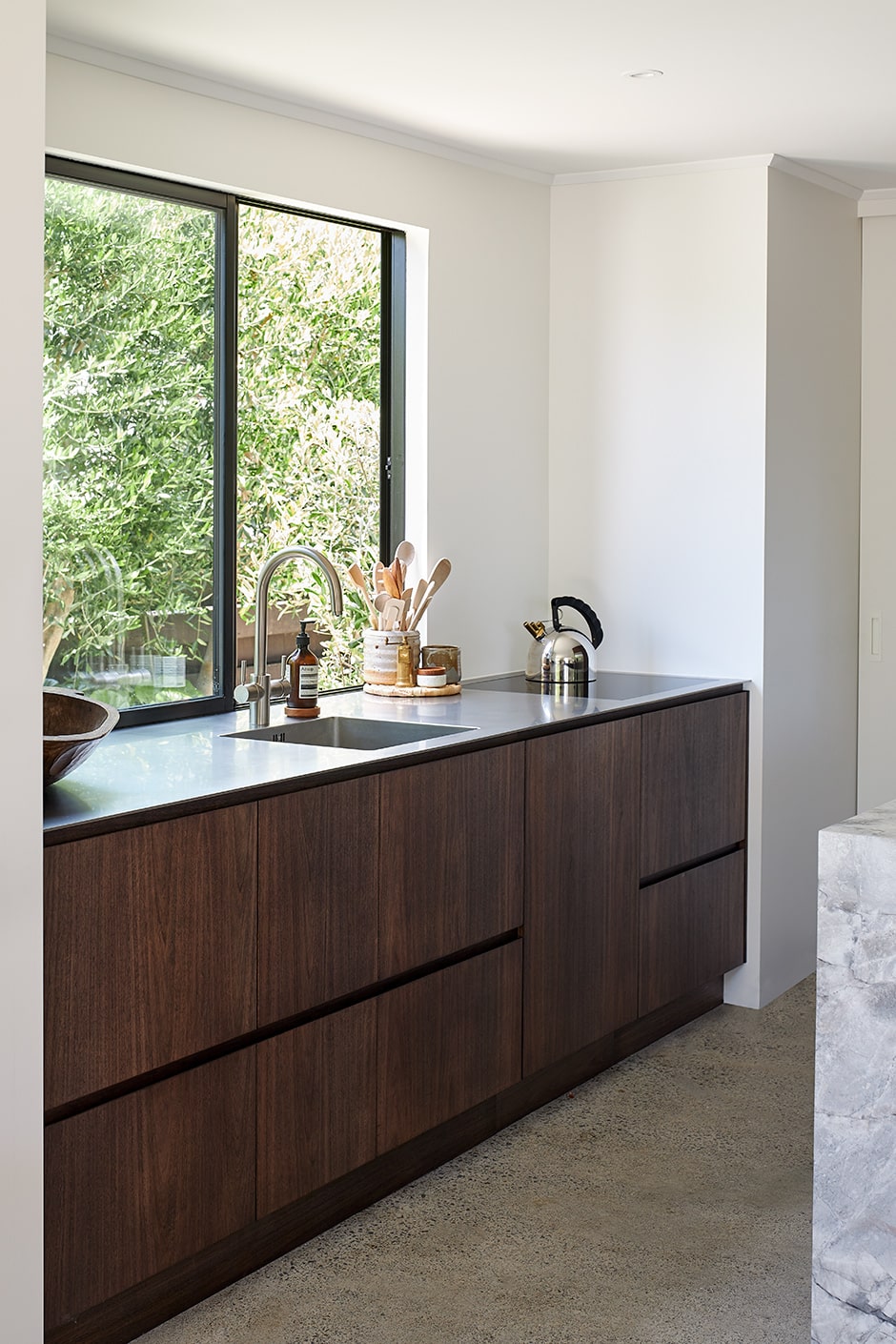 Painting the walls throughout in Dulux Cardrona gave the interior an instant refresh. Along with ripping up the carpet to reveal concrete that required little more than a polish to perfect, this established the starting point for the laidback-luxe aesthetic Juliet is known for at Marle. Low-impact design and natural materials are front of mind when she’s designing her collections, and she went down the same path here to devise a scheme built around a palette found in nature, including timber, veined marble and woven fibres. 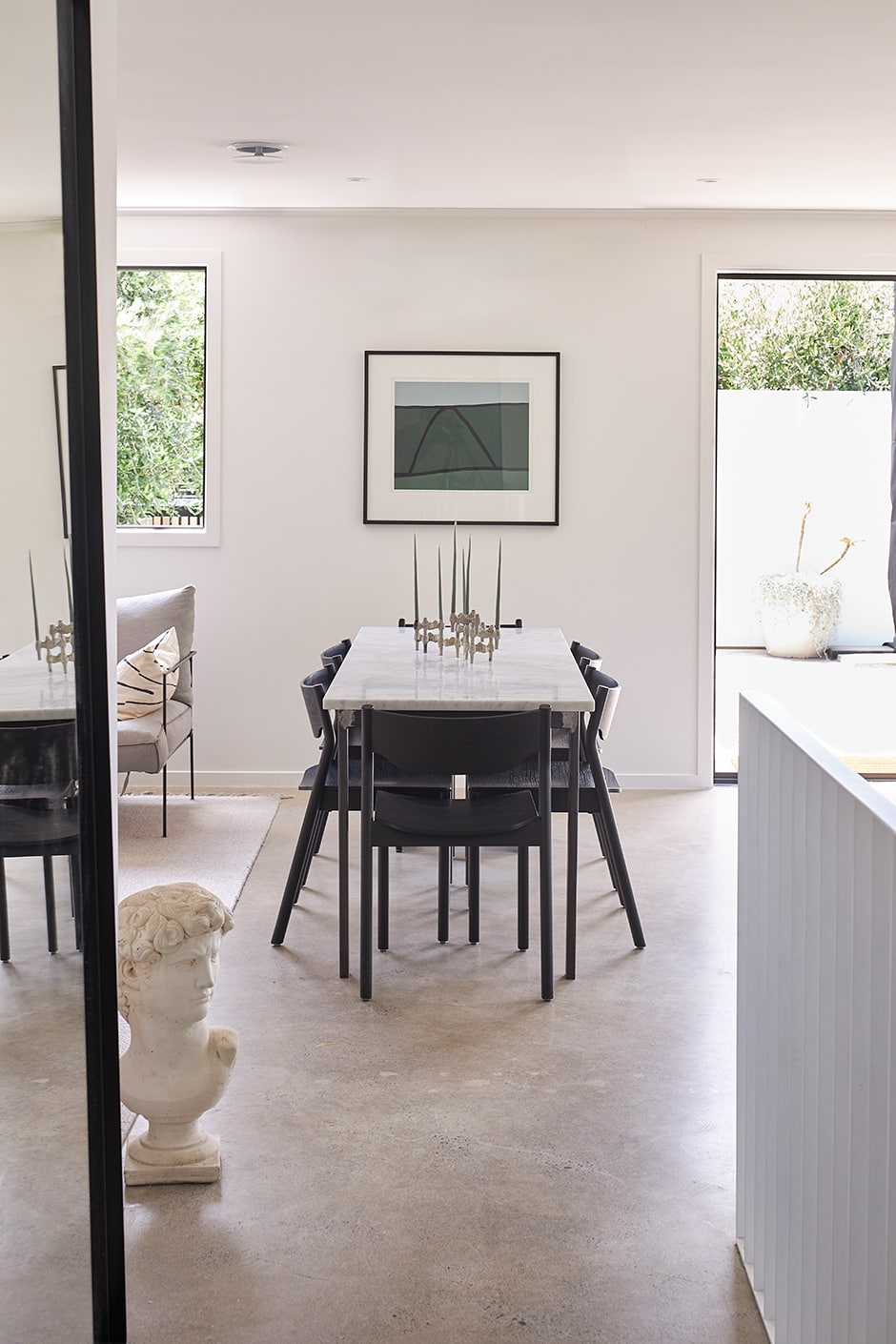 The couple had been charmed by the home’s ’70s detailing — including the arched doorways and entry foyer with internal garden — but had to make the call to sacrifice these elements and others to gain extra space. Still, the interior footprint remained small, so outside, creating a good-sized exterior living space was a priority. Now, what was once a petite patio is a generous deck that allows for al fresco dining, lounging and showering after stints in the surf. 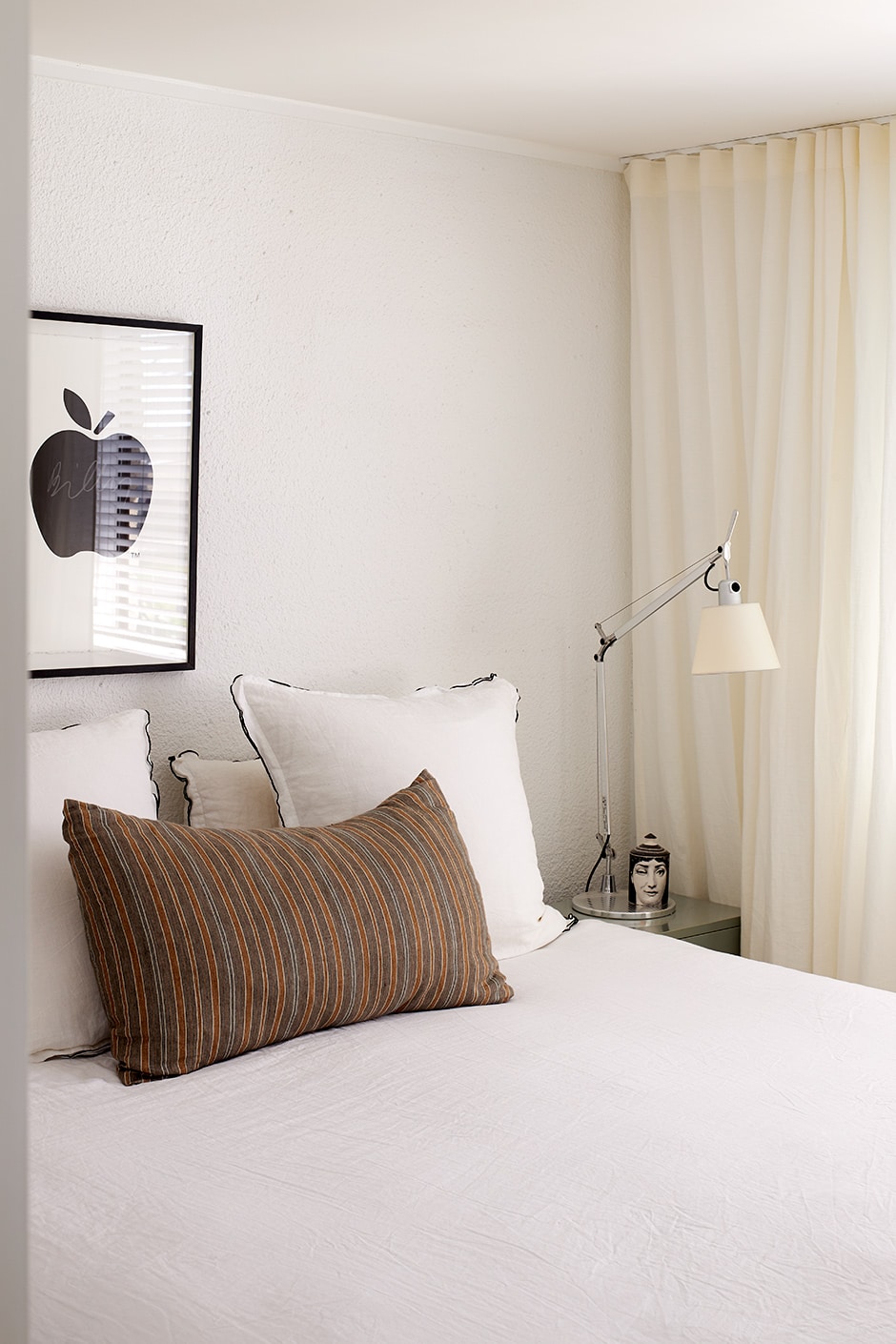 Following that three-week overhaul, the rest of the renovation was completed in stages as time allowed. “The house has definitely been an evolution,” says Juliet. “It’s seen many different configurations in the past seven years as we’ve figured out how it will work for us, especially when we became a family of four when our son Nero [now 4] was born.”
In a later phase of the renovation, reconfiguring what was once a separate, poky room into a galley kitchen connected to a laundry/scullery hugely improved the home’s flow. “My stepdad Sam Champion is an architectural designer and did an amazing job of devising the spatial functionality of the new kitchen,” says Juliet. “In fact, our entire family was integral to making our renovation happen. Justin used to be a builder, his dad Craig’s a builder and so is his brother Tony, so everyone mucked in and got things done together.” 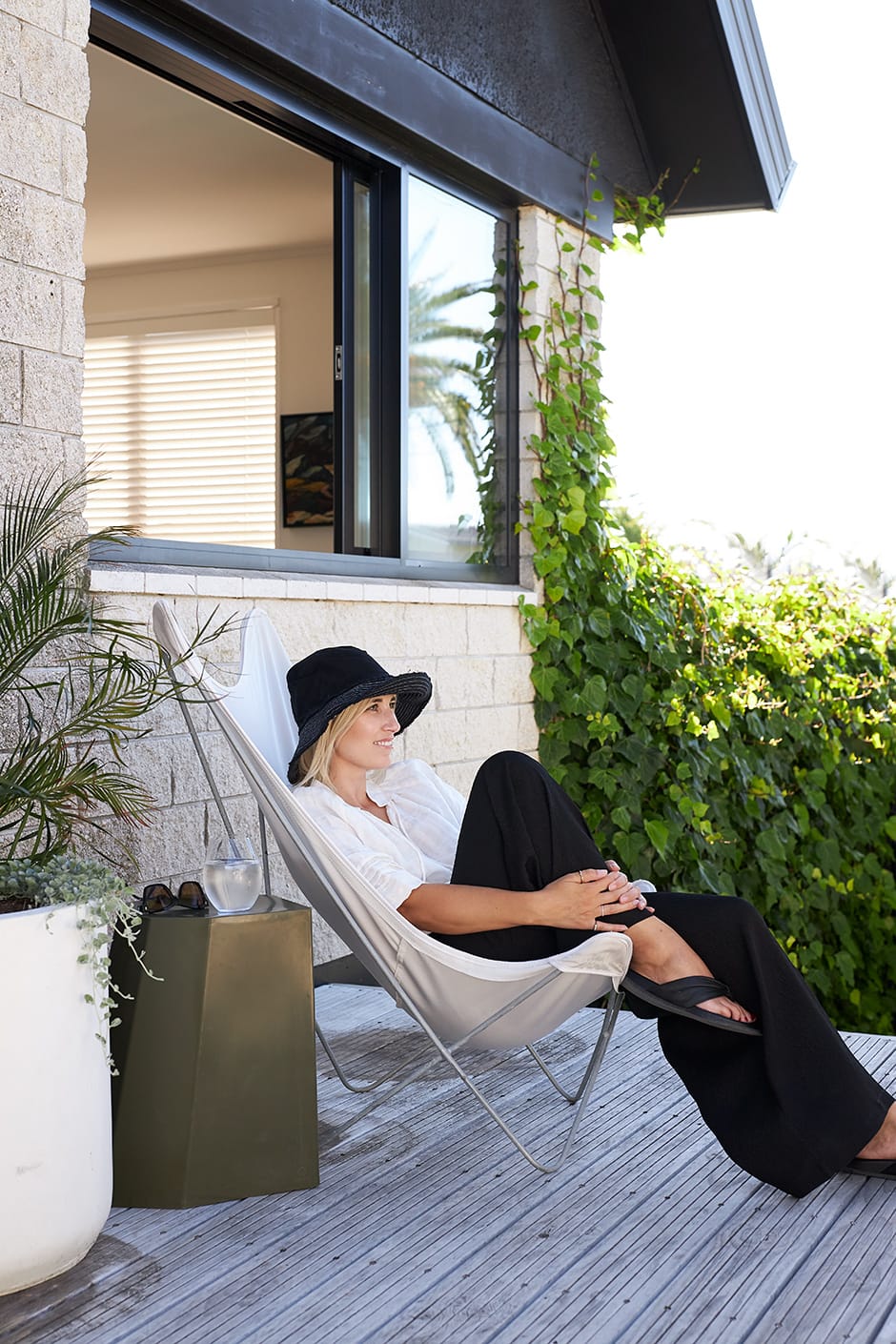 Juliet’s passionate about seeking out second-hand objects and art instead of all-new everything. She finds herself attracted to the unusual and unique, and shares her collecting habit with her mum, Denise Champion; they regularly check in with each other on pieces of interest at Cordy’s auctioneers and get together at their favourite haunts to hunt for vintage treasures.
“My style isn’t dictated by eras — it’s materiality and form that interest me,” says Juliet. “I’m drawn to simple pieces that stand alone beautifully or sit with other objects yet have their own presence. I love antiques, adore mid-century design and I’m also into Brutalism… Our décor is a pretty eclectic mix!

“I’m a sensitive being, and my surroundings are important for relaxing me,” she continues. “Home is where I go to recharge — it’s how I stay grounded. Almost everything in our house has sentimental value. For me, it’s about connection. Home is a place to be as a family, and a place to hold what’s meaningful to you. Justin and I enjoy having people around us, but we also love spending time here just connecting with our kids.” 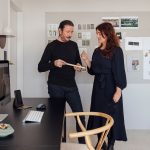 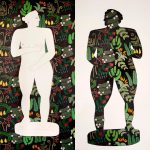