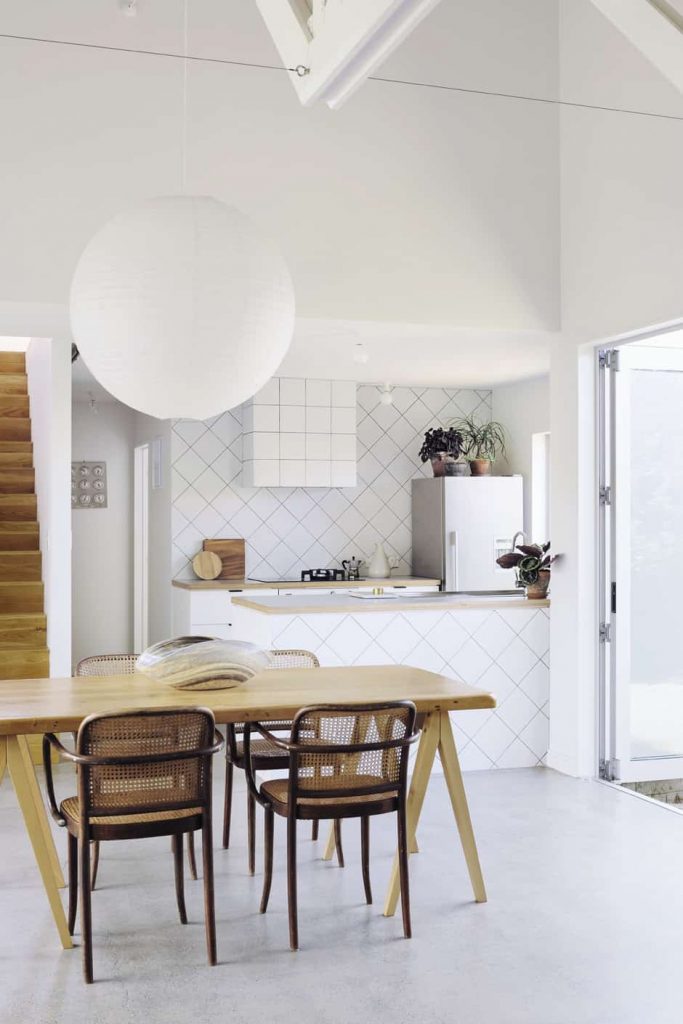 Nab ideas from these kitchens, which take a design-led approach to incorporating appliances.

In association with Fisher & Paykel

Opposites is a theme that runs through this small-space kitchen. The front bench in this galley-style area is tiled in and staying put, while in contrast the back bench has been detailed like a sideboard and, being on legs, doesn’t feel permanent. A simple tiled plywood box hides the rangehood above. 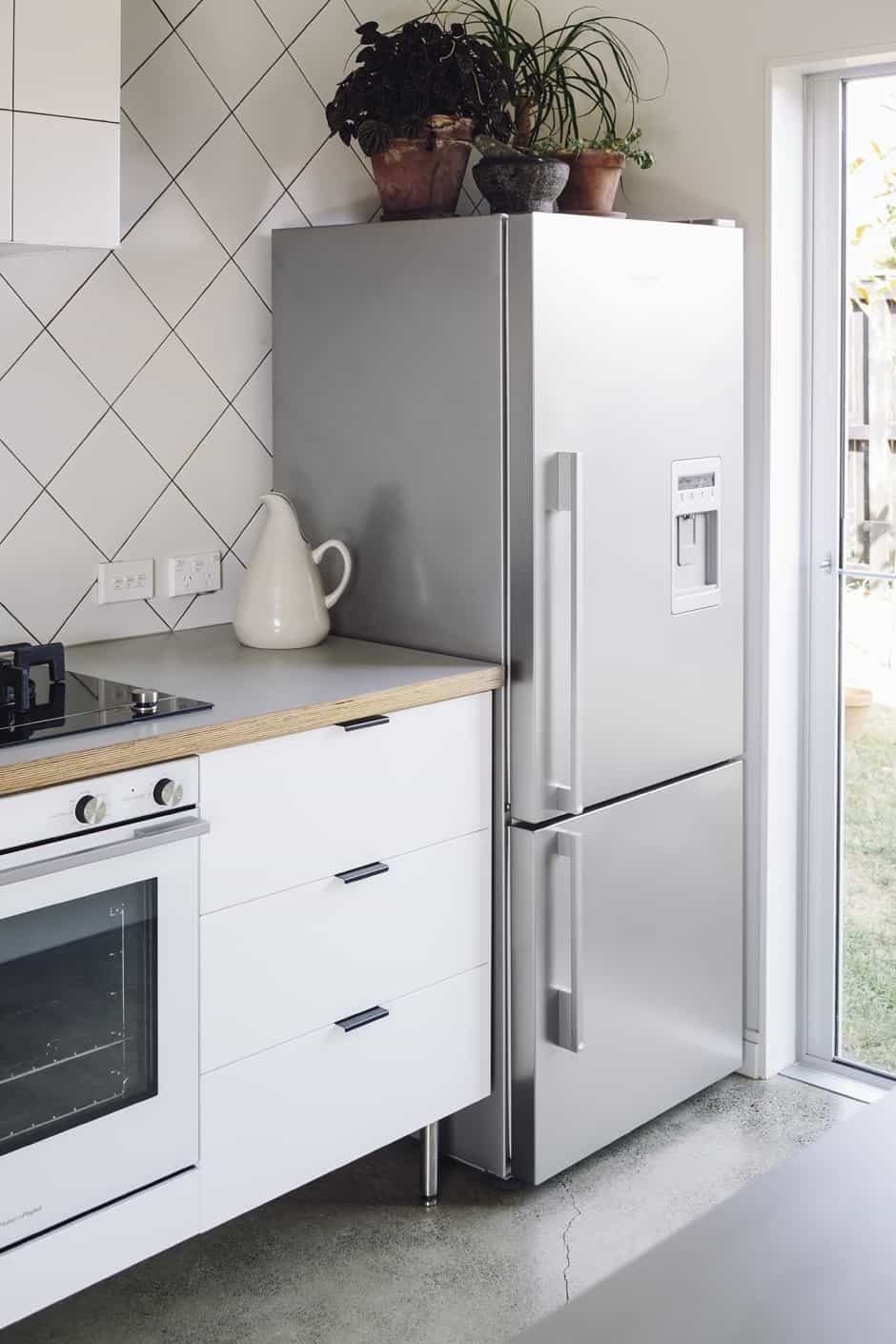 To fit in as much as possible, architect Henri Sayes chose flexible appliances. The Fisher & Paykel Tall DishDrawer™ Dishwasher proved the ideal size for the home’s resident couple, its compact form enabling them to fit a drawer for extra storage beneath it.
Though there isn’t a huge amount of bench space, a mix-and-match combination cooktop allowed for both a gas burner that can be configured for a wok or pan or right down to a small espresso pot, as well as a two-burner induction cooktop that can also become a single zone for long or large pots. 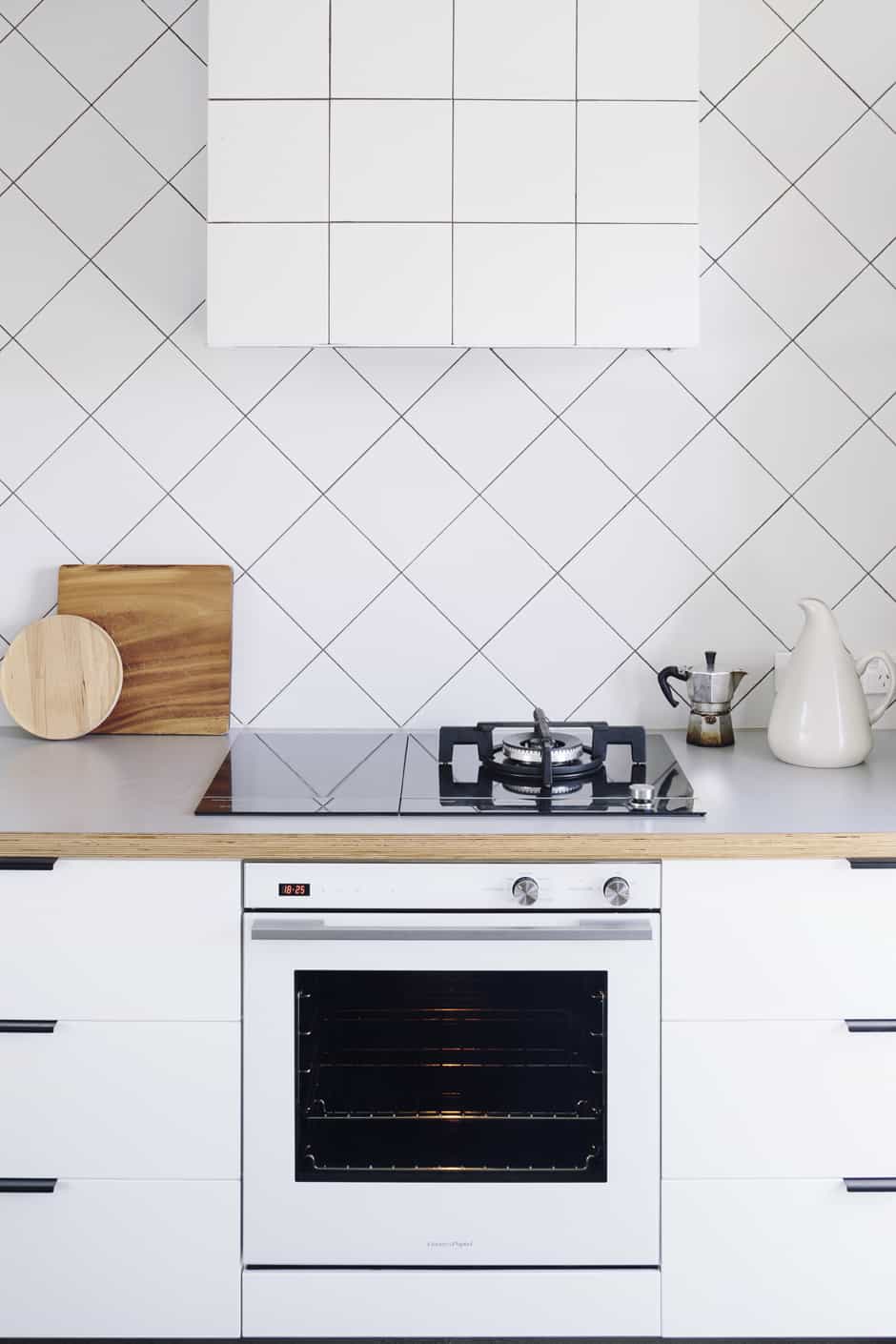 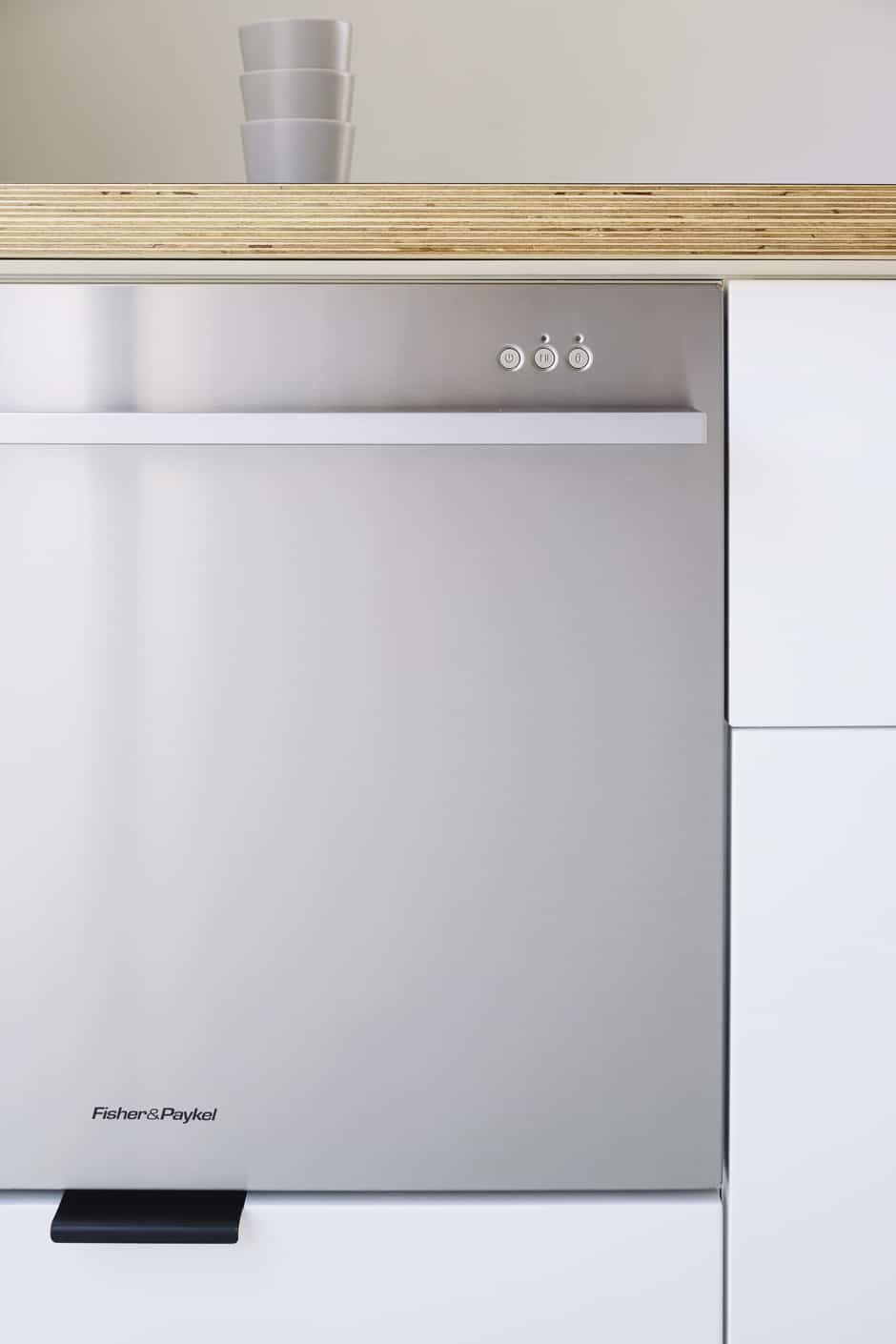 Instead of upper cabinets that may have created a division between the kitchen and living areas, Henri chose to build under-bench drawers, which means the space is less cluttered and has less visual noise. Similarly, rather than design tall cabinetry in which to house the fridge, he left the smooth sides of the appliance exposed and slid it into the space between the wall and the back bench, giving it the effect of being light, temporary and almost moveable.
Henri also created extra space by designing a narrow but ample pantry under the stairwell, adding an oversized pegboard slider to hide it when not in use, which became a design feature of its own. 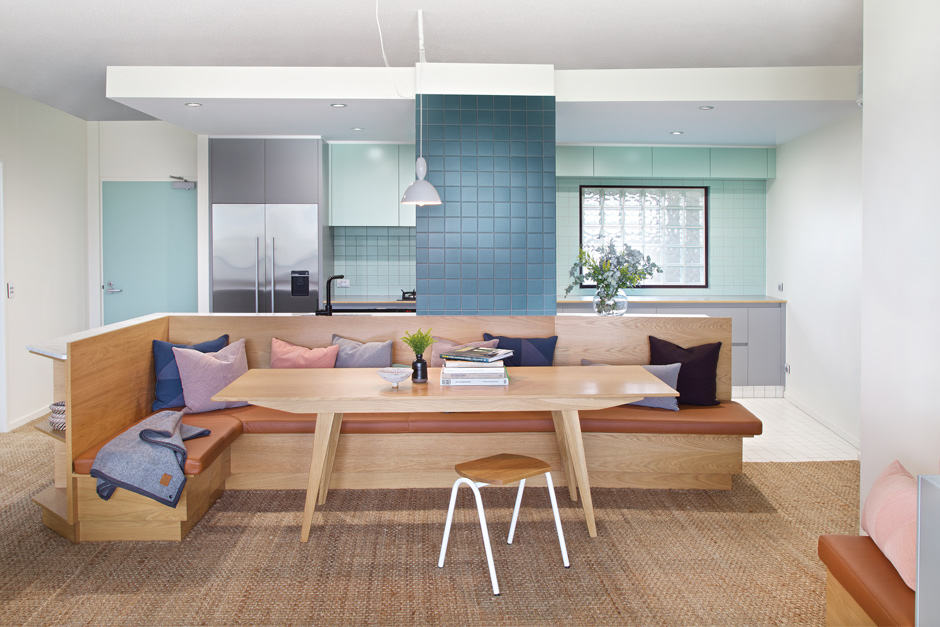 When Ian Wrightson and his team at Wright Stewart Interior Design were approached to transform this Brisbane apartment, they knew it was an opportunity to rethink small-space living in a creative, modern way. Although the home may have been ideally positioned on the Brisbane River, the spaces within it were poorly laid out.
The kitchen was tiny and without options for entertaining, so they set about creating a room that would broaden the possibilities for its owners. 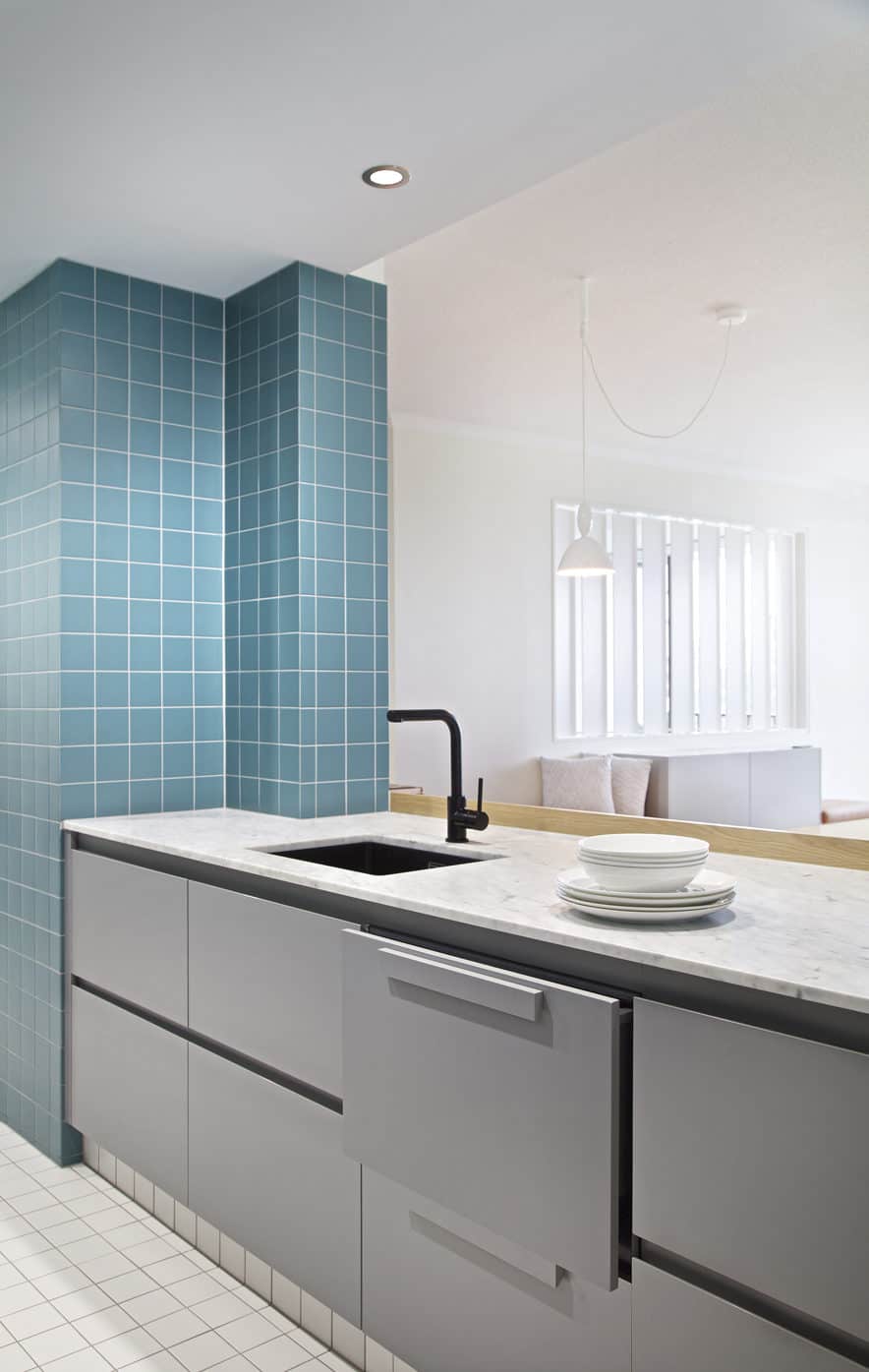 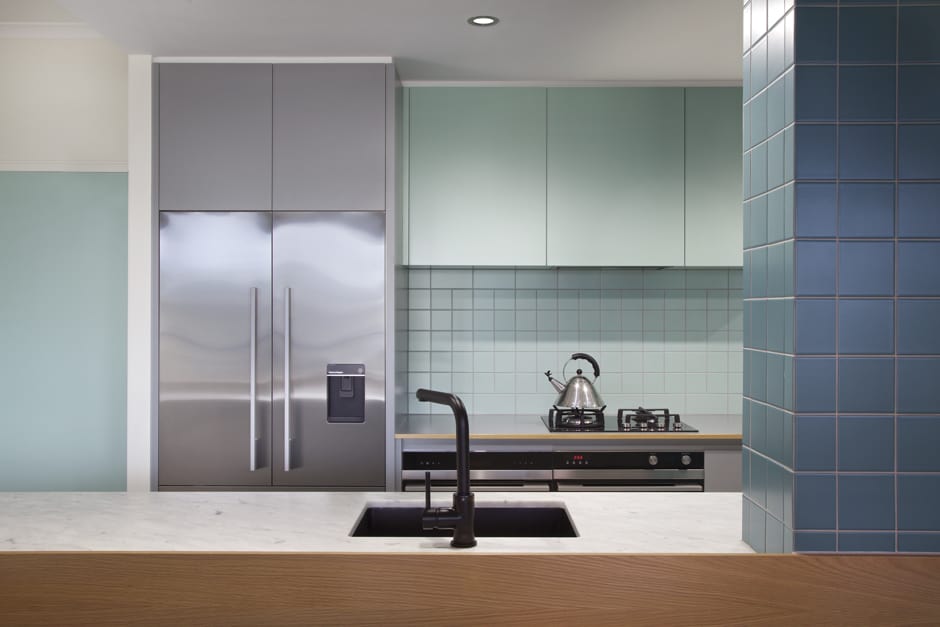 Considerable time was spent on devising the spatial layout, with one of the most significant modifications to the existing space being its extension into what was once an uninspiring and enclosed office. The result provided a larger bench and room for a built-in dining booth, the integration of the bench and booth forms saving space and creating a central hub for socialising.
With younger clients, it was a great chance for the team to use colour to enhance the playful energy of the kitchen. The chosen palette was inspired by a colour scheme developed by legendary Swiss-French architect Le Corbusier, the stainless steel finish of the Fisher & Paykel French Door Slide-in Fridge the perfect complement to the cool hues used on the surrounding surfaces. 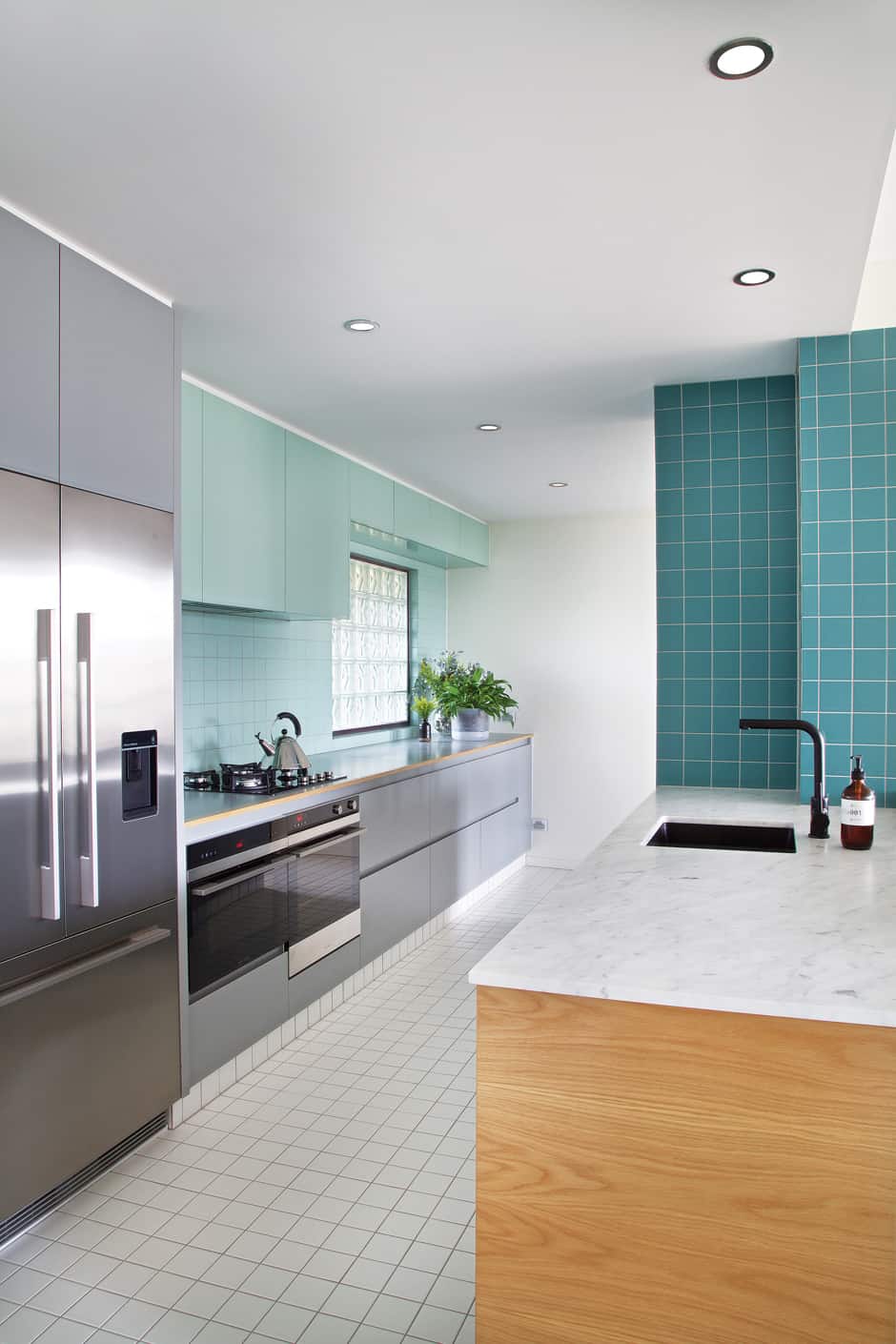 In order to keep the striking space looking clean, DishDrawer™ Dishwashers with custom-made handles were integrated into the joinery, allowing the bench to read more as furniture. 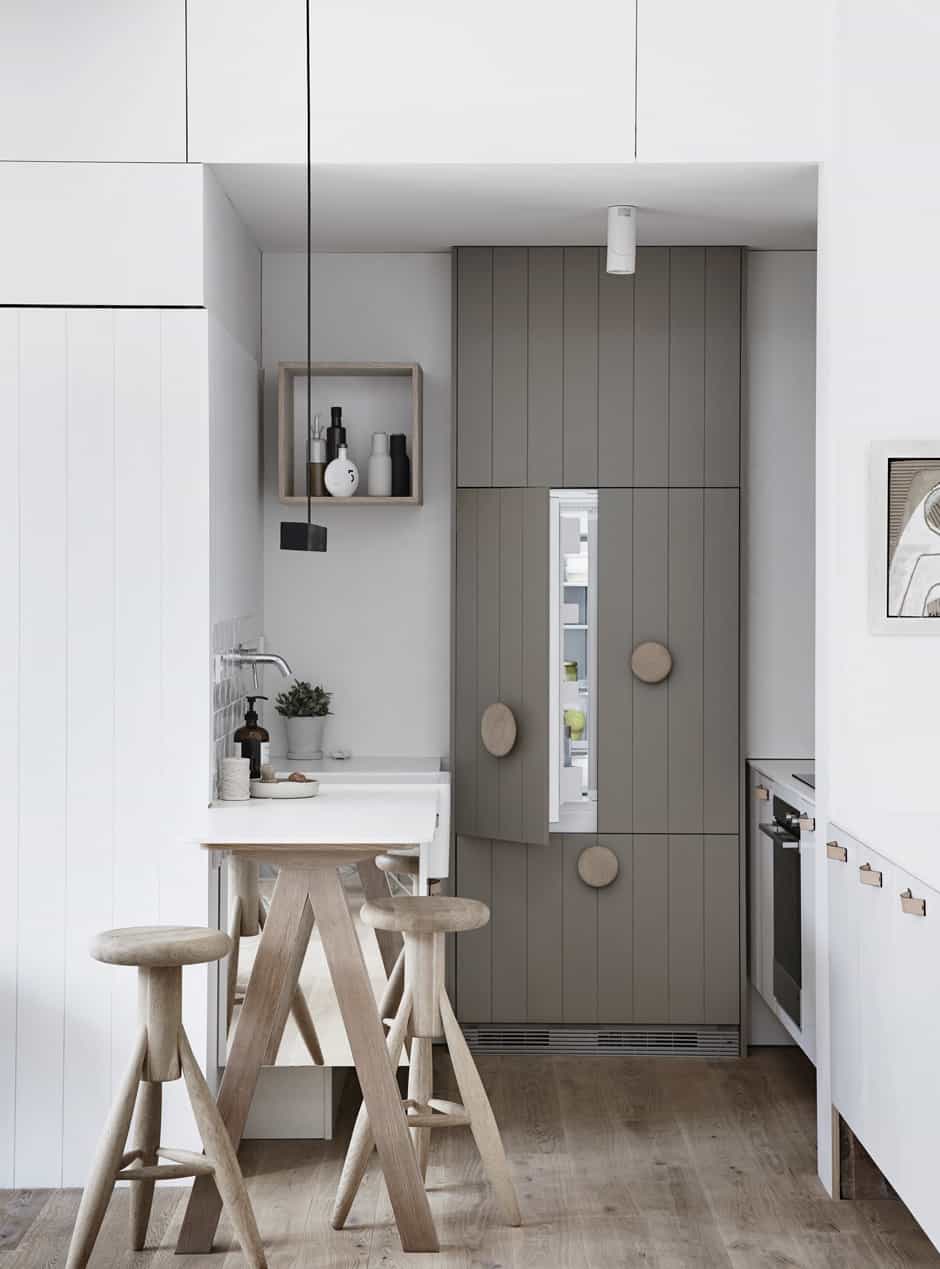 This award-winning kitchen is a thoroughly modern affair. Inside the house, a simple, gabled structure, there’s a loft-like open-plan zone where kitchen, living and laundry borrow space from each other to ultimately all feel larger than they are.
Increasing the reach of the kitchen, appliances are cleverly hidden in plain sight. The robust white Dekton bench that runs the length of the living space conceals a Fisher & Paykel CoolDrawer™ Multi-temperature drawer at its midpoint and a DishDrawer™ Dishwasher closer to but still outside the kitchen nook itself. In the kitchen proper, an integrated French Door Slide-in Fridge is set into a wall behind custom-made panelling; here, three Muuto Dots appear decorative but actually function as handles. 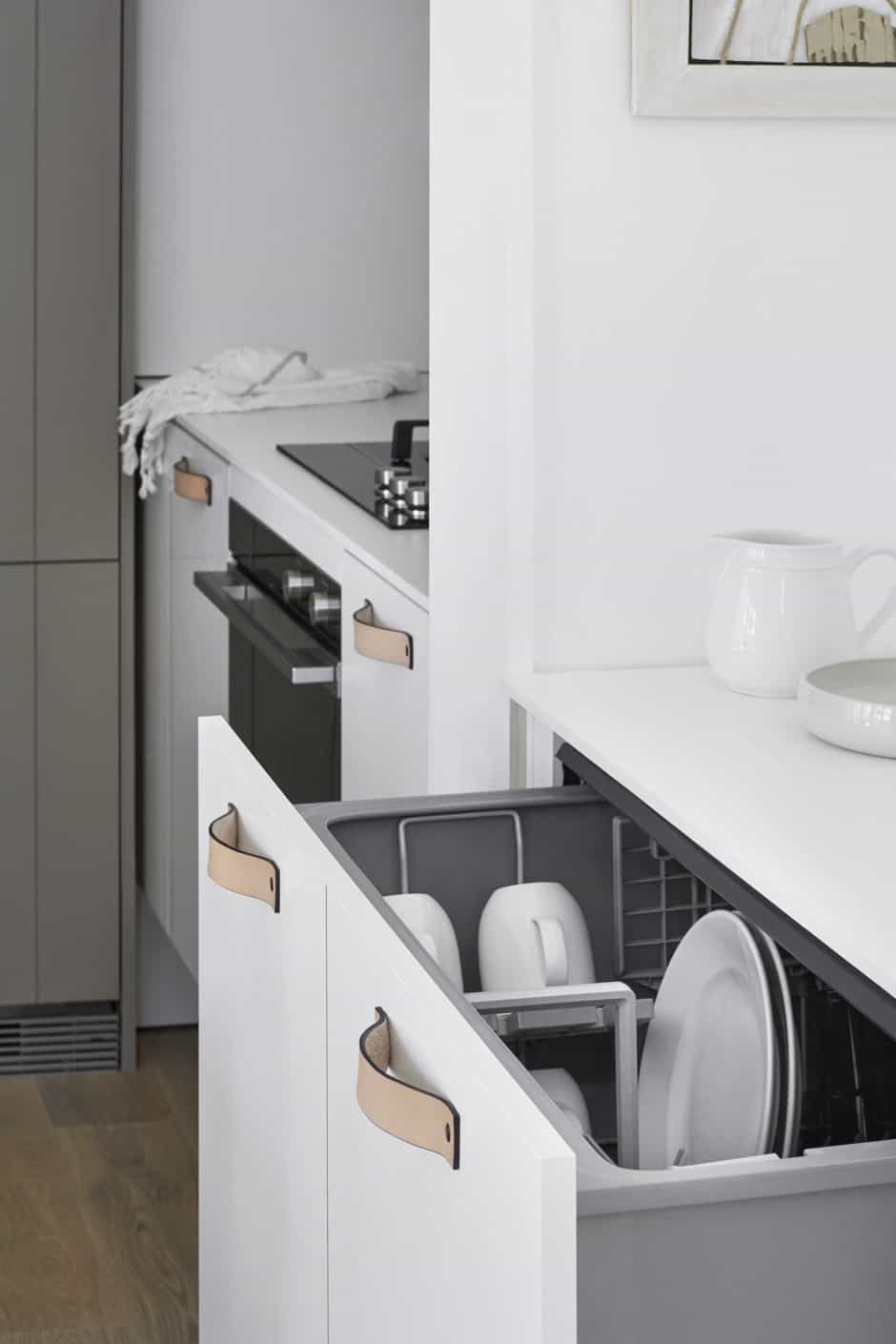 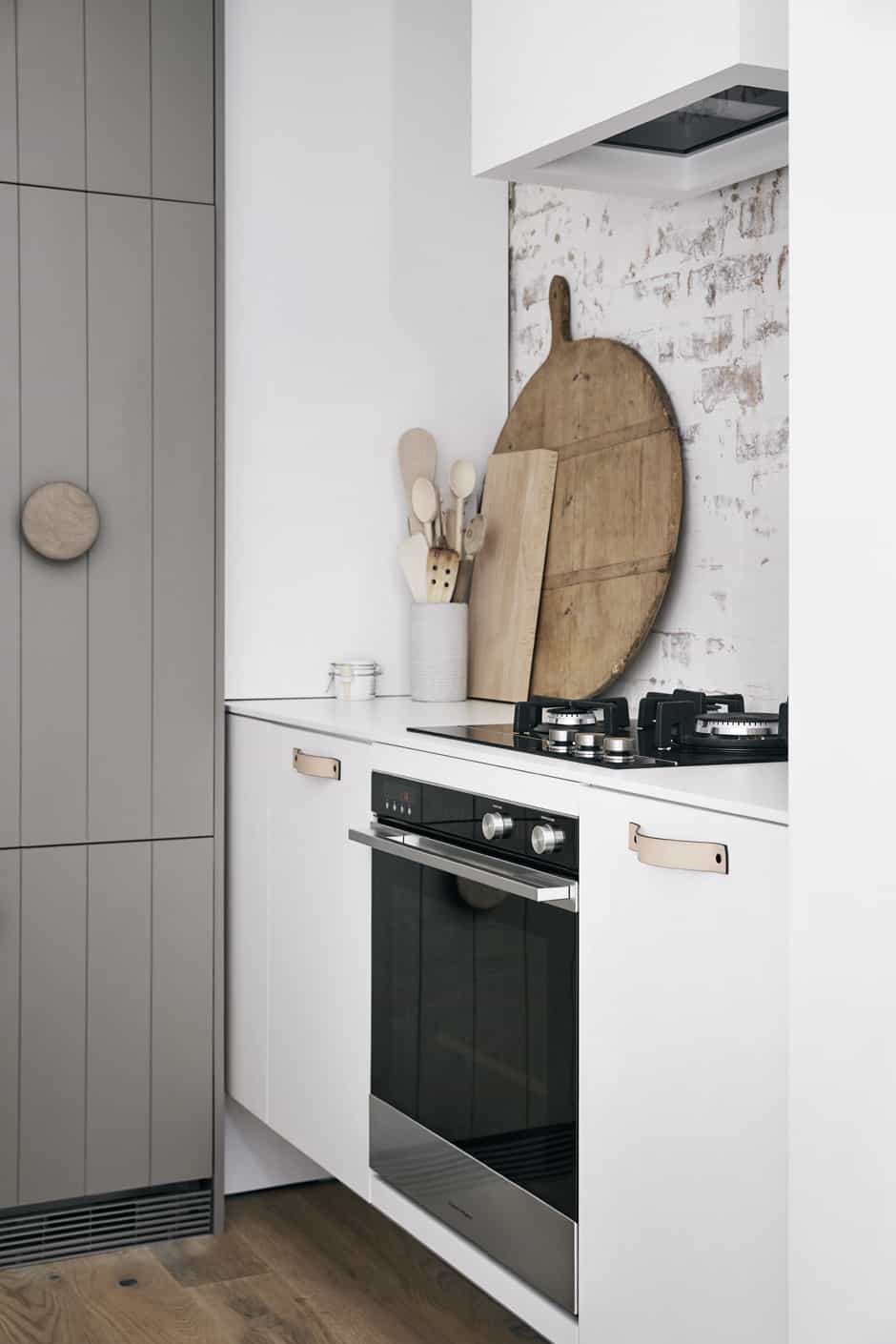 At the far end of the white bench, there’s a doorless entry to the butler’s pantry and laundry, which opens onto a laneway at the rear of the house through a recycled bar door painted pink. This laundry area hides behind two crate-like architectural forms, the reverse side of which contains cupboards for the television. Throughout the property, the designers have used a material palette of timber, leather, linen and ceramics to bring a calm, organic and neutral aesthetic to the home. 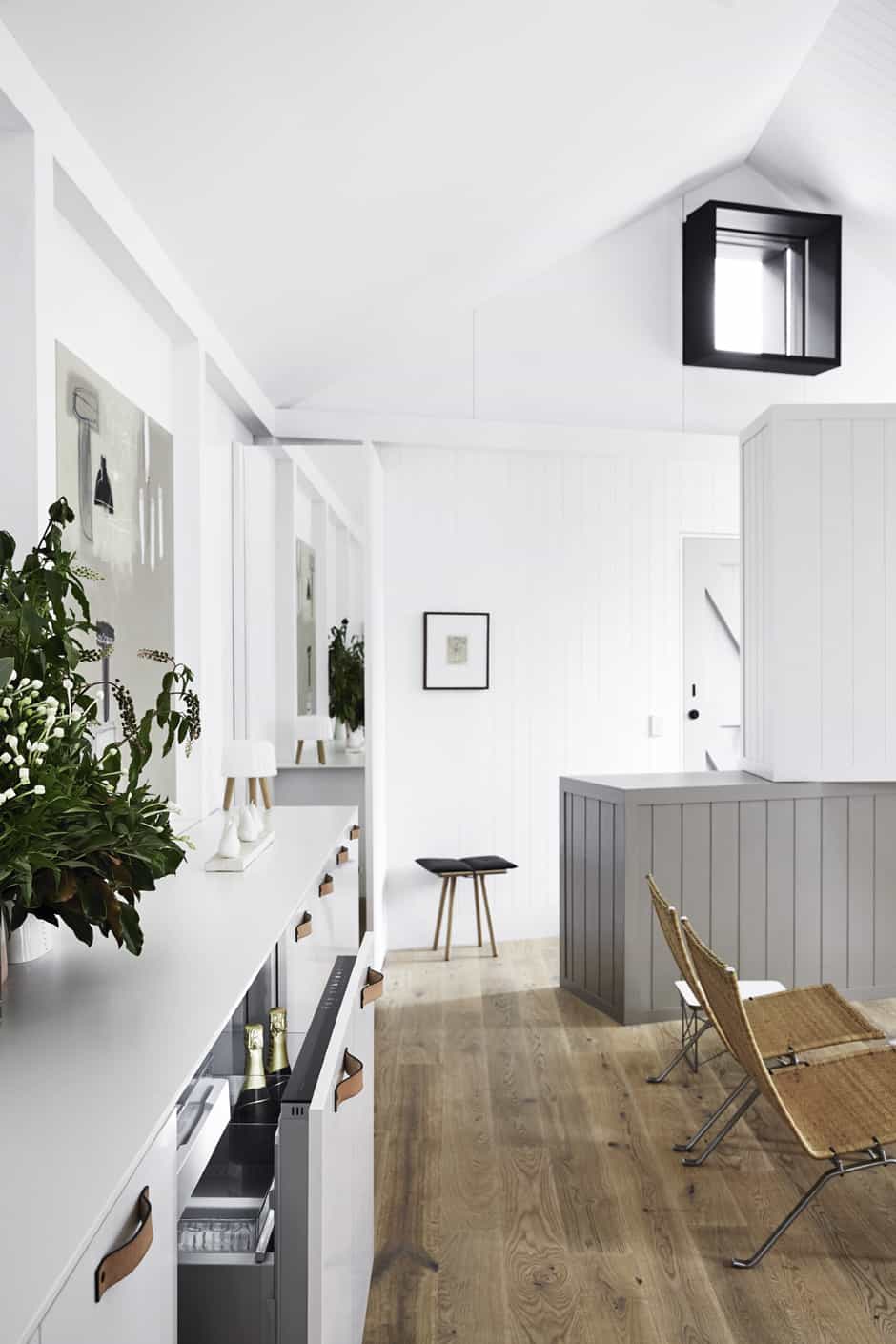 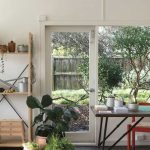 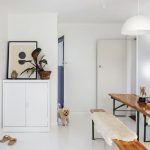