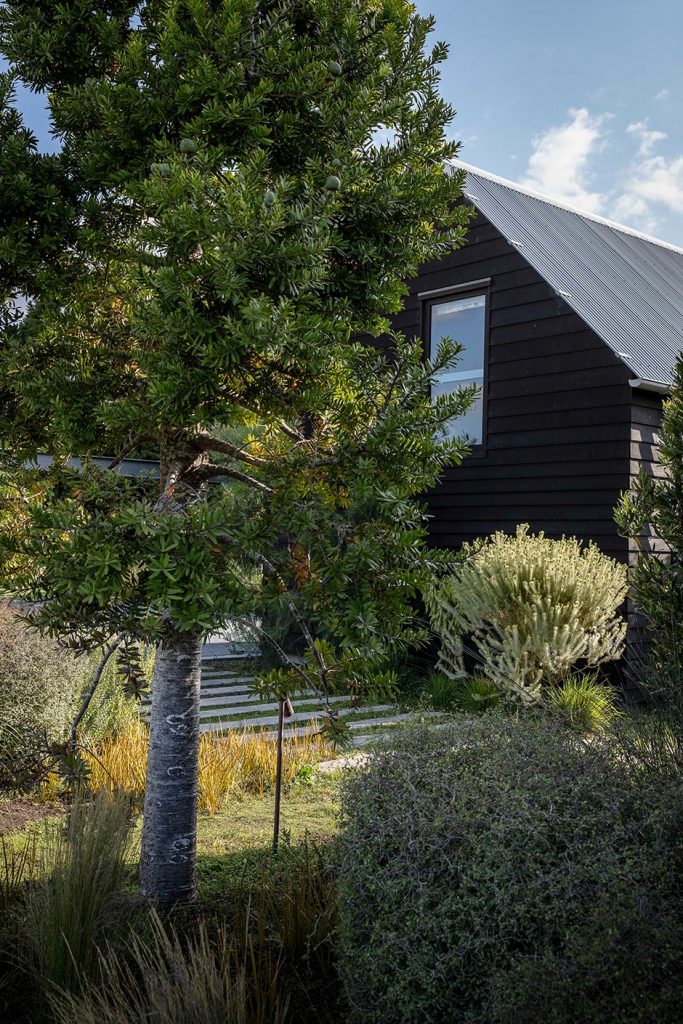 There’s a desire in all of us for the feeling of freedom balanced by comfortable boundaries, and this beguiling garden is veritably the leafy embodiment of that. On an estuarine finger of the Omaha River in Point Wells north of Auckland, it’s expertly structured with unmistakable whispers of wildness, a fusion of best-laid professional plans and nature’s own best intentions. While honouring the architecture with which they cohabit, the plants here are allowed a mind of their own, and a closer examination of their proclivities reveals why they’re all so at home.
The owners of this verdant setting for their award-winning 2017 home by Aaron Paterson and Steven Lloyd of Pac Studio and Dominic Glamuzina (now of Glamuzina Architects) had developed plots on their previous properties, but this time was different. “They were looking for something a little experimental,” says landscape designer Andy Hamilton of Andy Hamilton Studio. “They were remarkably open and trusting of my suggestions, which enabled me to push for a less ‘tried and tested’ palette of plants.” 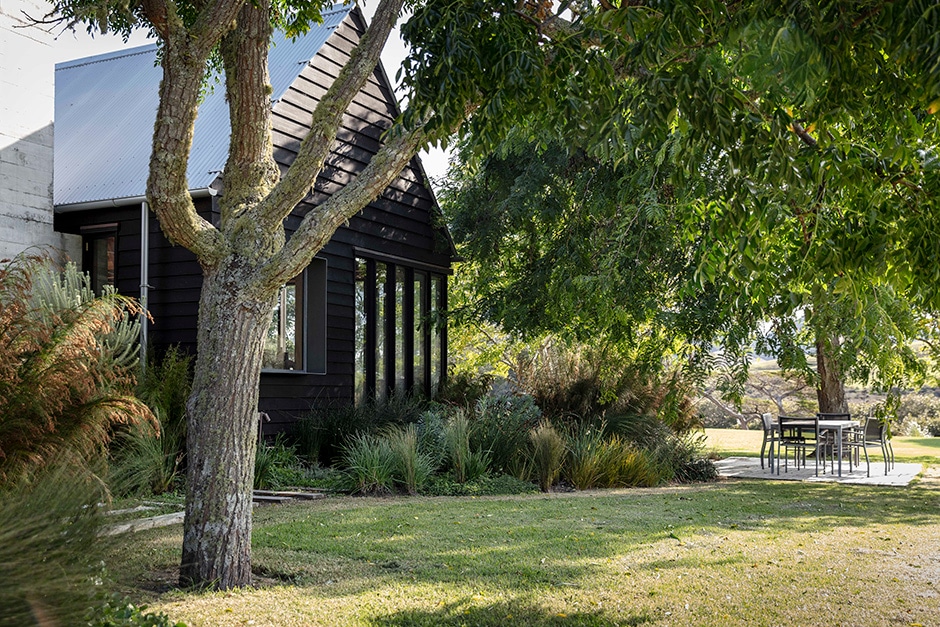 When Andy came on board, he encountered a relatively blank canvas, with the exception of a collection of mature trees (including gleditsia, kauri, melia and macrocarpa) and a stone-fruit orchard. His primary concern was to establish a naturalistic garden that reflected the environment beyond the property’s mown edge. It was to be a fun and satisfying project — and  a challenging one, too.
“Honestly, I walked away from the initial site visit thinking, ‘Oh heck,’” says Andy. “As beautiful as it is, the building felt somewhat stranded in a vast paddock. The planting needed to envelop the building in order to anchor it in the landscape — and quite extensive planting was required to achieve this.”

The component parts of the garden respond to the home’s architectural composition. Referencing a gabled barn and clad in cedar weatherboards, the modern farmhouse stands in pared-back contrast to the luxuriant greenery. It comprises two wings running north to south (plus a guest house and garage), linked by a timber boardwalk running east to west, an arrangement that gives rise to an enclosed entrance courtyard to the south, a north-facing courtyard overlooking the water, and decks at the east and west ends of the house.
“The entrance courtyard creates a route to the front door that meanders through swathes of layered planting,” says Andy. “The north-facing courtyard is planted to maintain an open visual connection with the estuary while framing the view with planting rich in texture. The gardens down the east and west flanks of the house provide continuous sweeping planting that grounds the building in the landscape.” 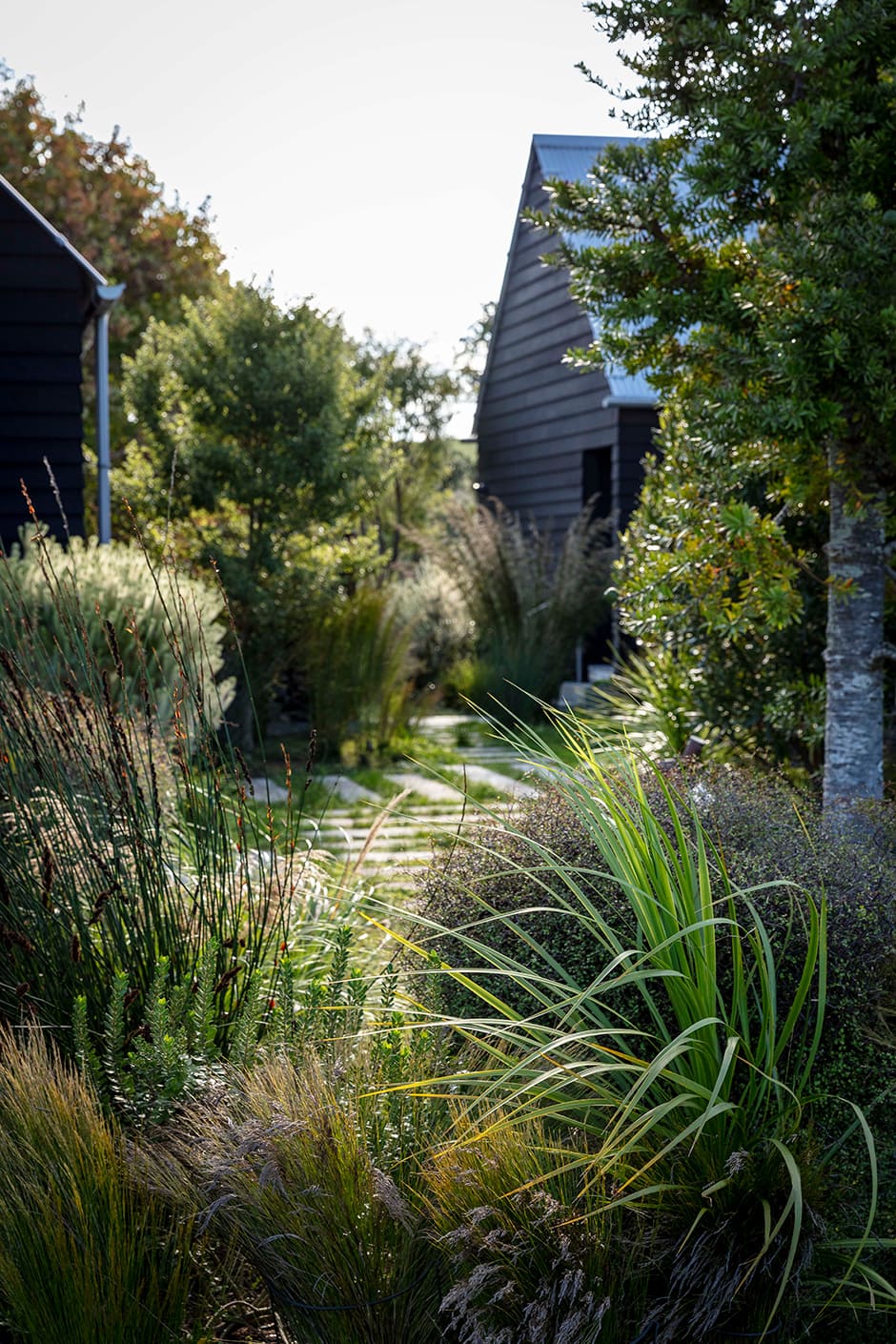 Andy wanted the plants to be native or share the textural qualities of a coastal plant palette. He also used several South African restiads and incorporated South African and Australian flowering shrubs and perennials.
“As long as plants broadly share a climate or niche within an ecology, there’s opportunity to combine them without it looking like a mishmash,” he says. “This plant palette is fairly uniform throughout the garden, with the combination of plants changing in response to variations in shade and wind exposure.” 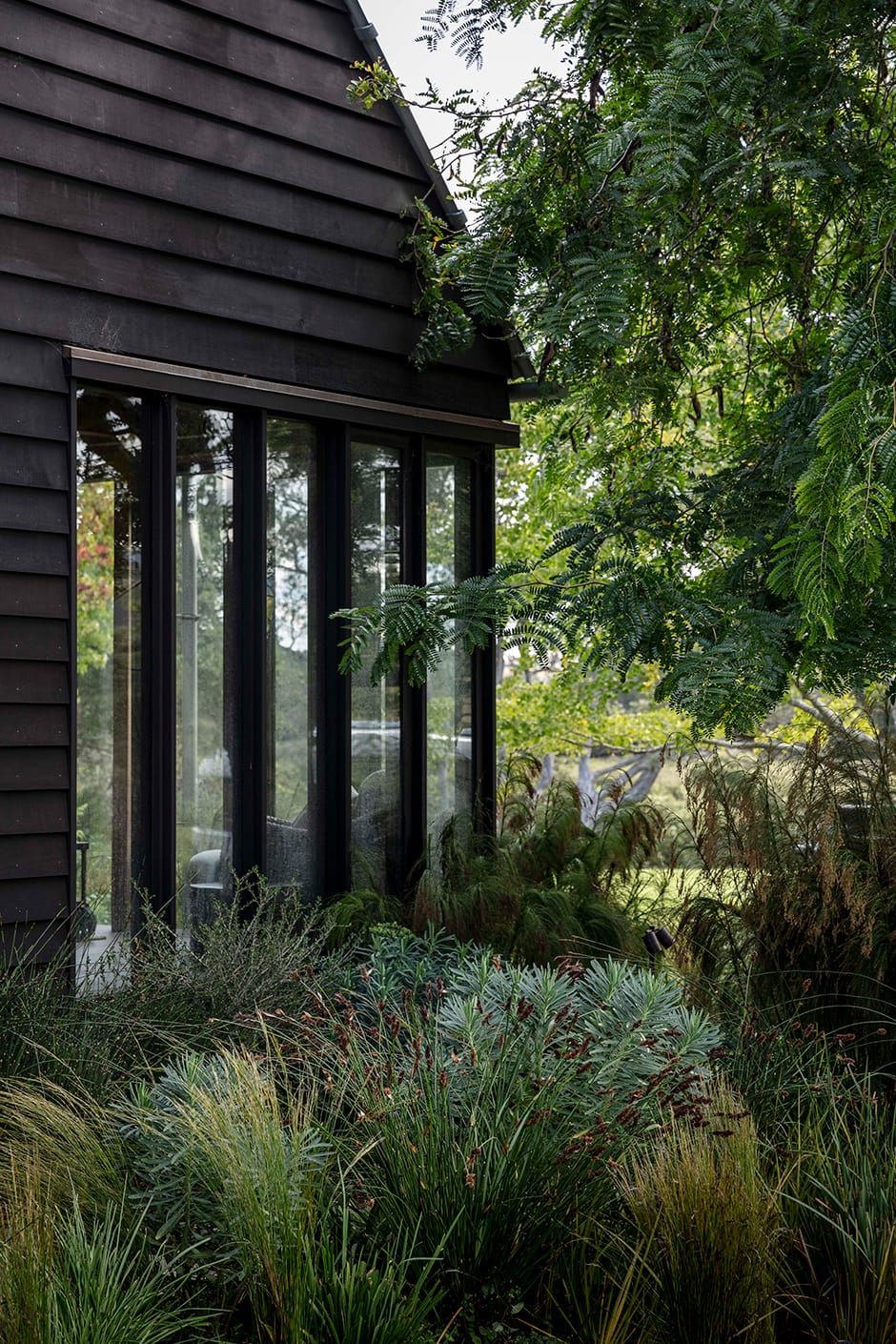 Although it’s not especially low-maintenance — well, not in the establishment phase — this plot has an untamed energy, something Andy’s really drawn to. “Nature is a constant source of wonder for me, so I enjoy gardens that explore the dynamism and wildness of the natural world,” he says. “I like the challenge of trying to make landscapes that aren’t necessarily beautiful but atmospheric, and think wild gardens can work particularly well on rural New Zealand properties because the landscape’s often rugged.”
This designer doesn’t dig trends, but the inclusive approach he’s taken here is undeniably current. “I love that it illustrates that our native flora and exotic plant species can sit alongside each other without looking daft,” he says. “I for one don’t subscribe to horticultural xenophobia.”
Can we try this at home? “Of course!” says Andy. “Naturalistic planting is about experimentation, trial and error, change and evolution. There’s no perfect state for a garden to be in, so I’d totally encourage people to give it a go. Just be thoughtful about the climatic conditions and soil types of where plants naturally occur. Plants that share a similar habitat often look quite harmonious together, despite being from different corners of the world.”
andyhamiltonstudio.com

PreviousJanice Kumar-Ward made this compact apartment a little bit glam 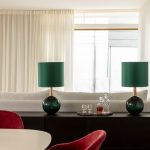 NextSo.Ah’s plant-based candles and soaps are really rather lovely 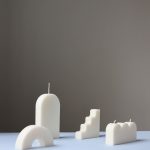