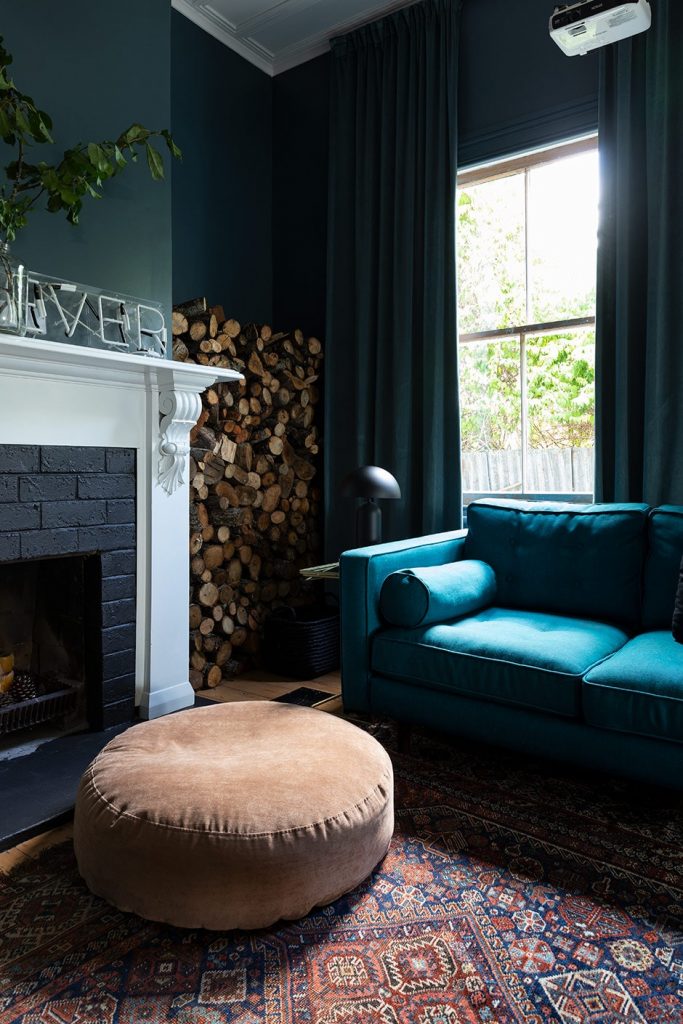 Appealing to the senses when designing a home can only reward you. It’s as simple as the smooth feel of a surface, the way tiles catch the light or how a dark, sumptuous room cocoons and soothes. By designing a home that’s more than just visually inspiring, we nurture the soul, reaffirming our dwellings as places in which to recharge. 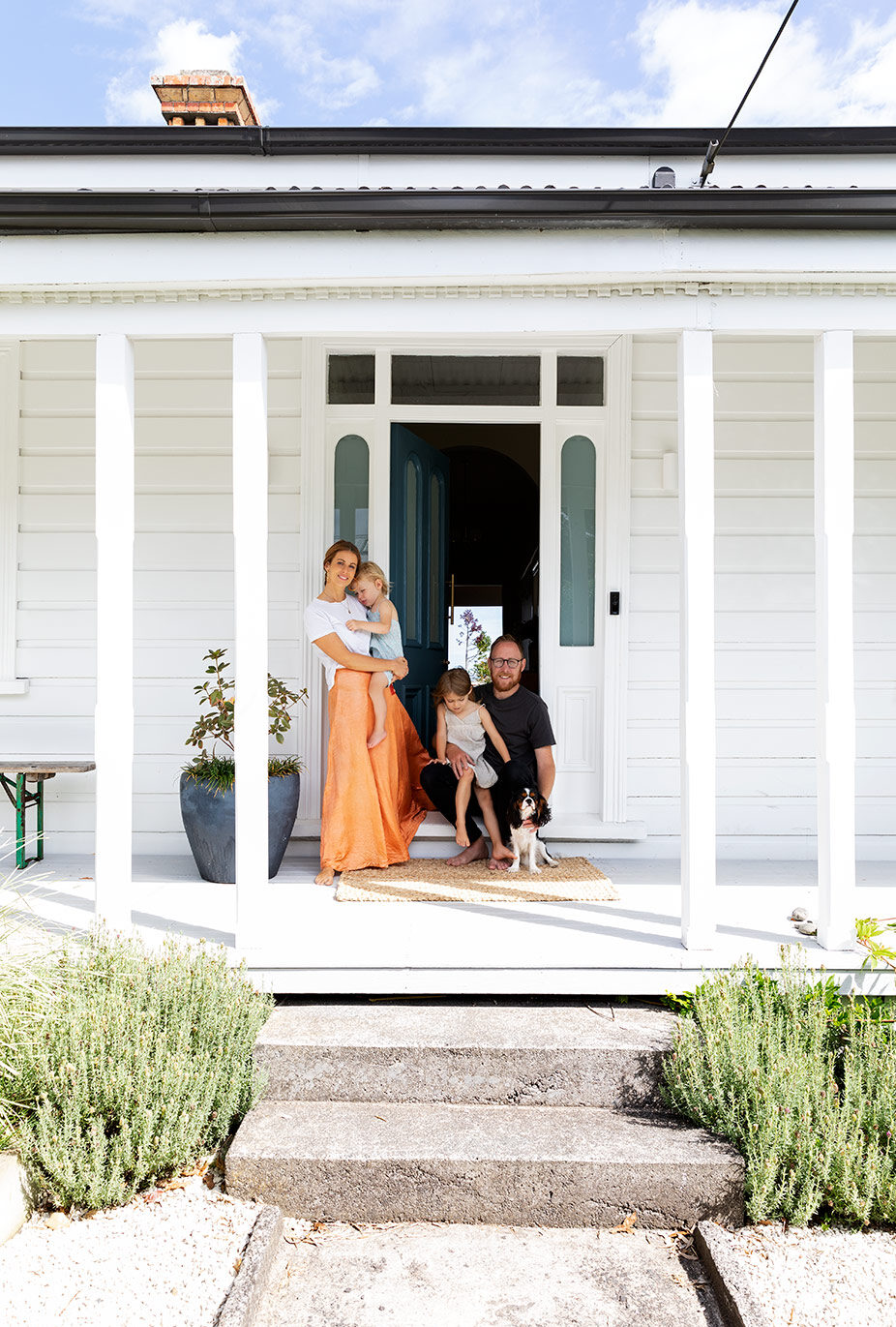 This couldn’t be more accurate for Fiona Clarke in her home in Kingsland, Auckland, which she and her husband Michael McLean bought in 2016. “Michael always talks about how the world can throw what it wants at us, but our house is our sanctuary — everything within it is about that,” she says.

The couple had previously been living in a 1910 villa at the bottom of the hill a few streets away. Rainy nights would see them lying awake, hoping for no water damage. Knowing they didn’t want to stay there forever, Fiona spotted a house for sale — a villa built in 1905, but this time at the top of the hill on a flat section. They viewed it on a Thursday and won the auction on the Saturday.

After living in the “almost unliveable” house for four years, they were financially ready to renovate. Fiona, an experience designer, and business-owner Michael called on friend and interior designer Jessica White of Room By Room to draw up some plans. They then turned to another friend, builder Glynn Hogg, to bring her ideas to life.

Beyond the villa’s modest frontage, there’s a hallway with a 3.10m stud height that exudes grandeur. The team kept three of the existing bedrooms where they were and turned the fourth into a living area, removing a wall to link it with the kitchen and a play nook for the couple’s daughters, Violette (5) and Evie (2). The bathroom was relocated and an ensuite created. 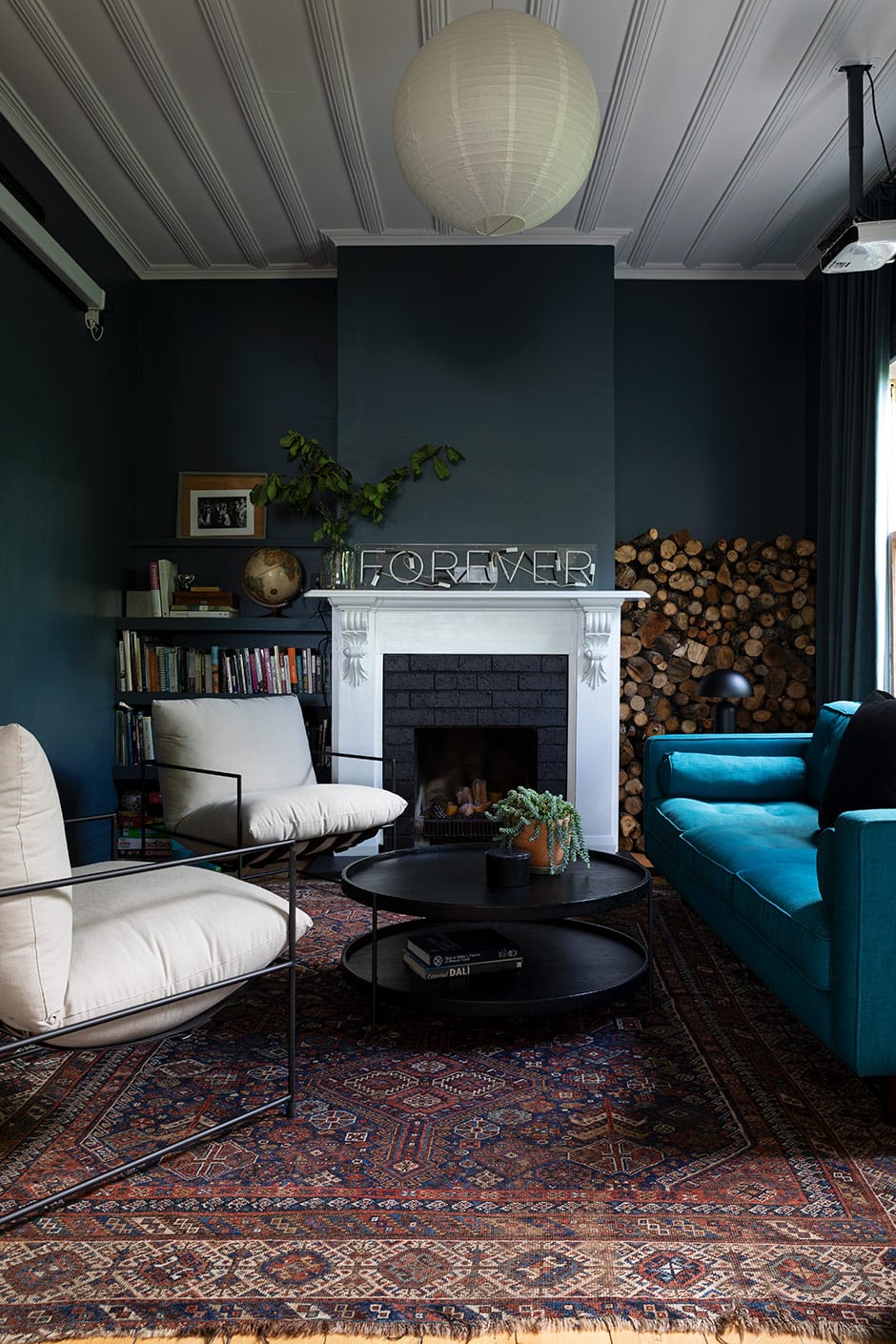 While she was deciding on the look for the interior, Fiona was working on mood boards for a client. “One summed up my old aesthetic: bright and clashing. But with children, you end up with so many bright toys and clothes, so the other mood board, which was more pared back, was what appealed. I used to want my home to be energetic; now we need it to be calm. My job is to understand how people live, what motivates them, what their struggles are and where we can design new ways, and here it was about how to make the house easy to live in, enjoyable and not over-designed. It was about how this space works for us.” 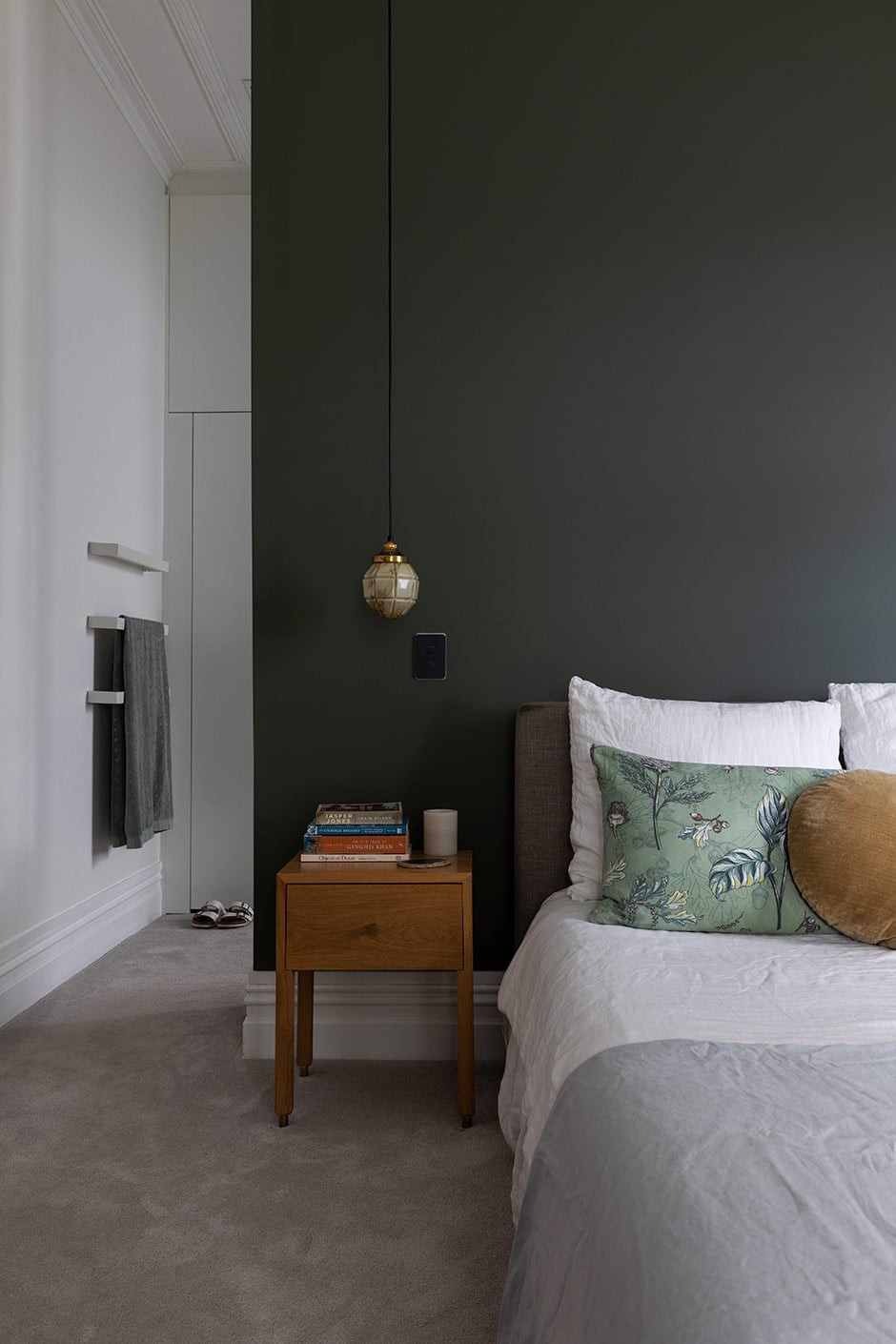 To that end, the kitchen was placed in the most extensive space in the house. “We’re in there more than we are anywhere else in our home,” says Fiona.
The kitchen flows through the girls’ nook to the “grown-ups’ lounge”, with its walls drenched in a dark grey-blue. “The children don’t tend to use this space,” says Fiona. “At night, it’s easy for Michael and I to shut the doors, hide the mess away and pull the screen down to watch movies.” 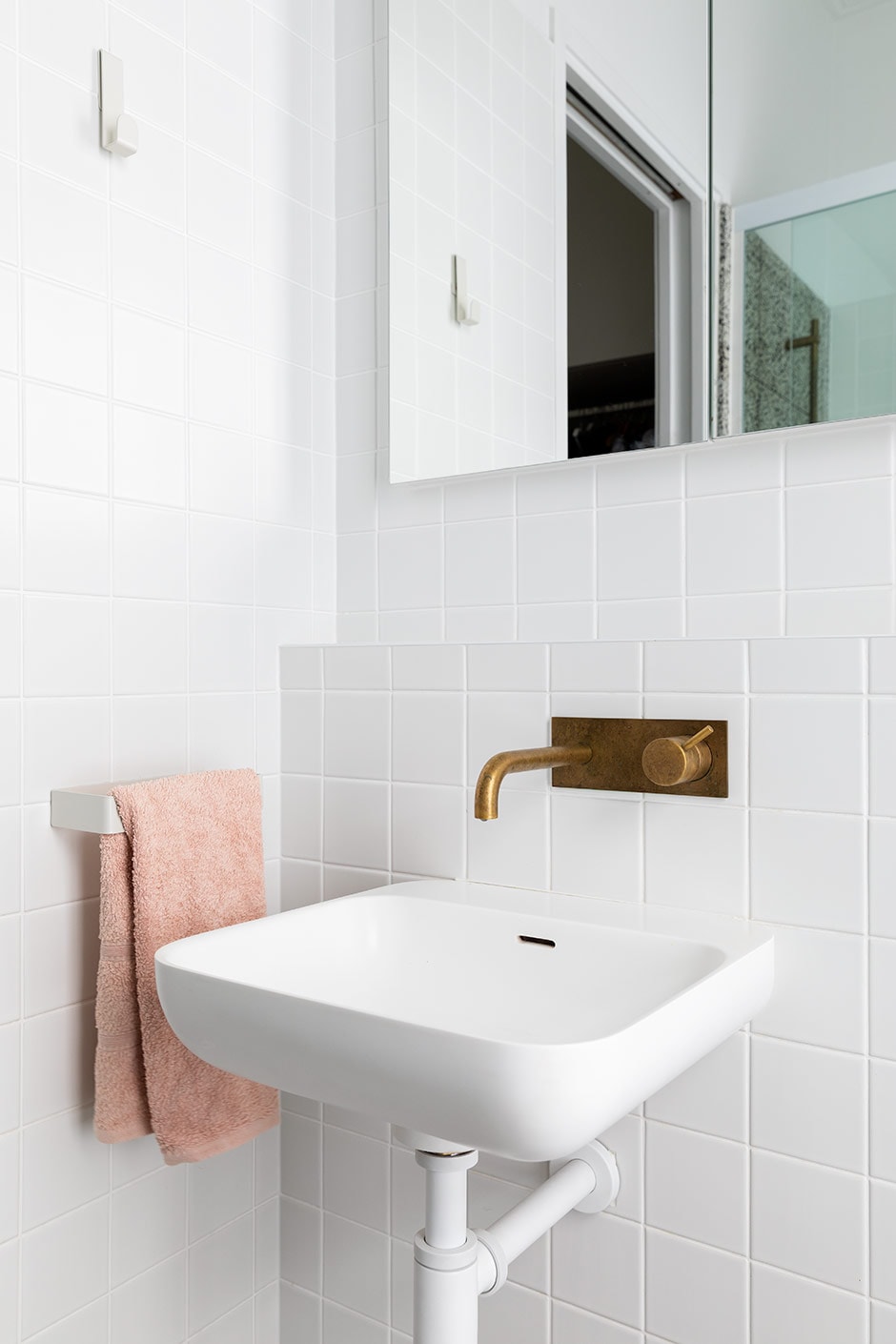 The bathrooms are fitted with brass tapware that will develop a patina over time, and rounded sinks that are velvety to the touch. “It comes back to everything in the house feeling nice,” says Fiona. “It’s the same with the wall tiles — they’re matte, and we like the uniformity of their square grid.”

Among the home’s most celebrated new features is the deep, curved, limestone-resin bath that sits beneath the main bathroom’s pink ceiling. “I like to come in here in the evening and light candles, which makes the room glow pink,” says Fiona. “It’s heavenly — like being in a spa.”
Michael’s more likely to be found on the covered deck, stoking up the woodfired barbecue, a key part of his vision for the home. “He cooks out there a lot,” says Fiona. “After dinner, the girls toast marshmallows and we sit and chat. There’s something about fire and water — they take you back to what’s important.” 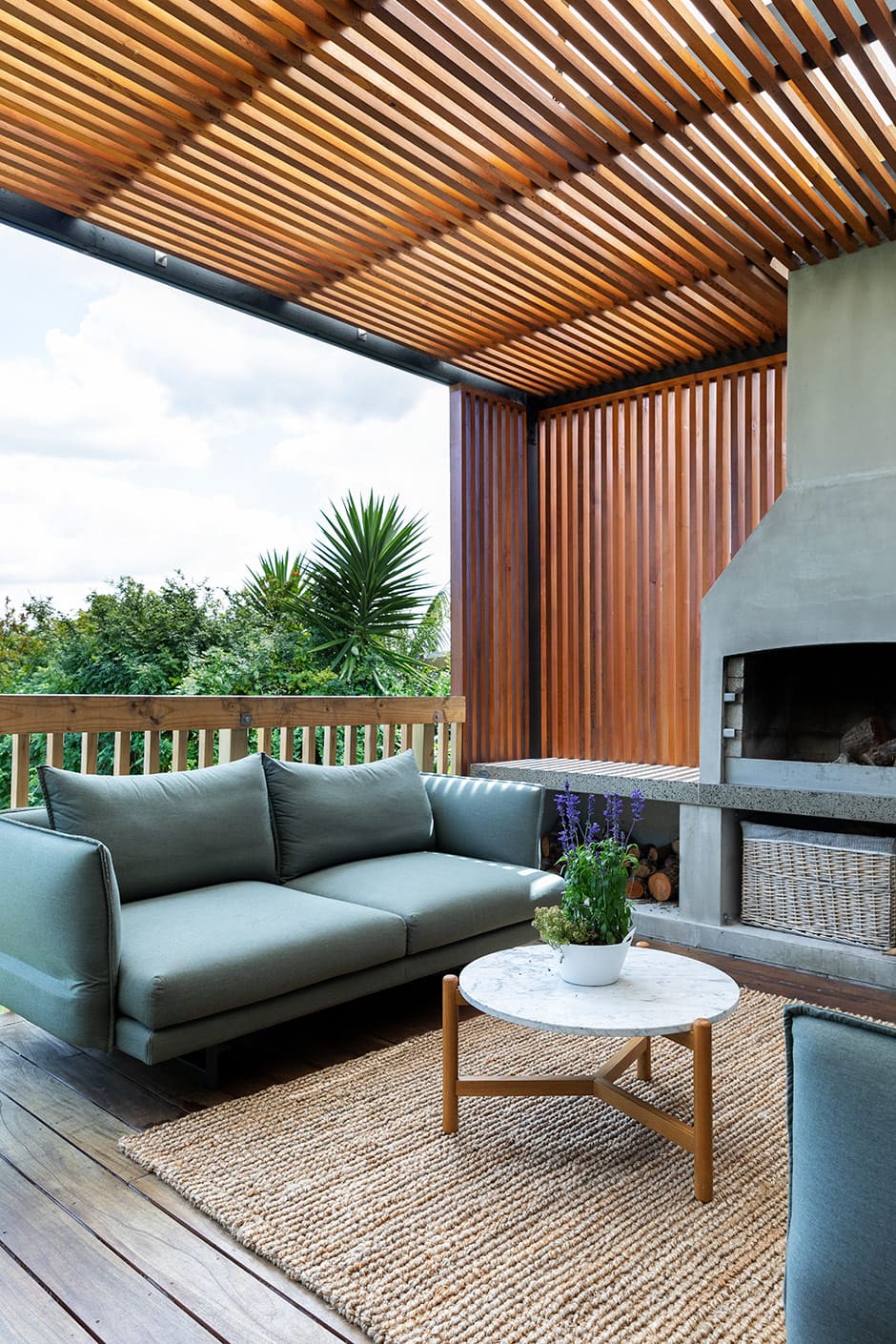 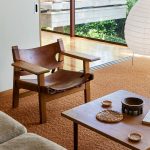 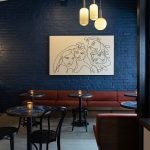