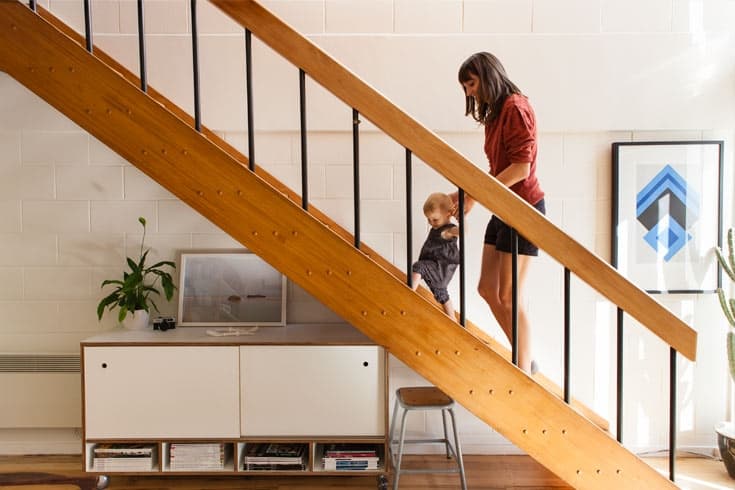 Not all first-home dreams are built around a quarter-acre – sometimes they start with a cosy ex-council flat from the 1960s.

There’s the familiar first-home dream: the quarter acre, mowed on a Saturday, while 2.5 small humans bounce each other off of the trampoline. And then there are the new native imaginings. Ones where you lean over the bar-height deck with your beer in hand, watching gangs of apartment kids barrel through the residential park down below. Both are nice. Auckland couple Duncan Innes and Nicola Carpenter chose the latter.

Well, they didn’t set out to. But, fresh from years of apartment living in Barcelona and London, they were open to doing it again. “We knew how much space we didn’t need,” says Duncan. And, in knowing what you don’t need, any remaining requirements become clear: “Location was very important to us,” Nicola says. That location was central Auckland’s Freeman’s Bay, and its walk-to-work proximity to Nicola’s law firm, and easy access to motorways in all directions for Duncan’s photography jobs.

But man cannot live on location alone – and nor can his wife. Duncan and Nicola arrived at the open home for this 1960s ex-council block apartment in 2011, with a standard first-home buyer’s checklist in hand. “We were looking for an affordable, well-built, low-maintenance home, with original character – that still had potential for us to add value and our own style,” says Duncan. Five minutes after walking through the door there were five ticks on the list – despite the nicotine-stained, wall-to-wall blue carpeting. “We had a peek underneath,” says Duncan. “We saw tawa.”

The couple also saw “a really clever design” by Auckland City Council architects, which optimized the small space by incorporating character features such as an impressive ground-to-second-floor window, facing the staircase.

Sold, emotionally and literally, Nicola and Duncan excitedly packed up their grand designs, moved in… and did nothing. “We took that old advice of living in a space for six months to see what felt like needed to be done,” Duncan explains. During that time, the couple also took the counsel of Douglas Lloyd Jenkins, via his book At Home, A Century of New Zealand Design – as well as researching modernist architect Vladimir Cacala’s flagship homes for inspiration.

This led to the apartment’s first major change – painting one of the lounge walls duck-egg blue (Edward by Resene). After dipping their toes in paint, the couple got really adventurous. The whole kitchen, with its higgledy-piggledy cabinetry, was ripped out and replaced with simplified, streamlined benches. With the overhead cupboards gone, uninterrupted views of long-established trees beyond the deck opened up in a bush-like vista.

Next, Duncan and Nicola ripped up their un-beloved carpeting and polished their clandestinely glimpsed, and much more affectionately felt-for tawa floorboards. Duncan and Nicola call this move “game changing”. Painting all the other walls quarter-tint Joanna by Resene scored the winning goal; opening, brightening and expanding.

The apartment’s lower level was then finished off with a custom-made flourish. A low-profile sideboard by Ward Manufacturing can now be found crouching under the stairs. Duncan added a ply top to the table base (a housewarming gift from his aunt, who owns Trees Company), and he used the offcuts for shelving. Next, the couple brought in a mid-century lounge suite and geometric dining chairs (from nood) to give further nods to their home’s roots. Then it was time to kick back… before launching into three months of stripping lino off the rimu staircase and sanding it back.

Although there were a lot of declined weekend invitations over the six-month renovation, Duncan and Nicola brought in the experts for the major job: refitting the bathroom. Employing the help of their friend, interior designer Janice Kumar-Ward from The Recipe, the old bath-and-shower combo with a pokey washbasin was replaced with a custom made wall-length glass shower, a smaller version of the sideboard downstairs, and striking herringbone tiling.

Besides their coat of Resene’s Joanna, the bedrooms were largely left alone. There were, however, a few carefully selected mid-century enhancements. Bedside tables, light fittings and artworks complete the effortless-looking 60s aesthetic, yet were the result of “a lot of hard work on TradeMe”.

Looking out the window of the master bedroom, over the trees to the picturesque church spire which is lit by the thin autumnal sun, it is easy to see why the couple left well enough alone up here. The view is feature enough – and if it needs any help at all, it gets it from the Mad Men reminiscent wood panelling that rises halfway up the walls to meet the windows.

Outside, there is no privately owned quarter-acre to mow. But there are 3.5 hectares of common grounds, designed by New Zealand’s first Harvard-educated landscape architect, Harry Turbott. Planted as the buildings were completed in the late 60s, the huge trees are now home to twittering green parrots and a resident morepork. This is the stuff new New Zealand dreams are made of.

PreviousA Stylist’s Interior Makeover
NextOne Out of the Box