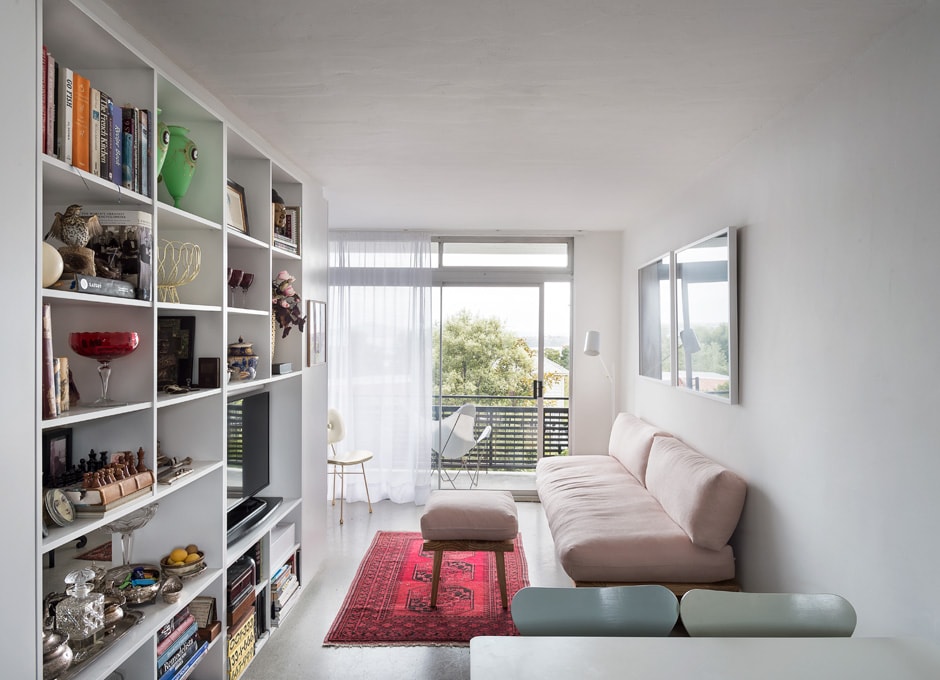 A clever renovation saw this studio turned into a tiny triumph with a distinctly feminine feel.

Like a magician who pulls a rabbit, a dove and an impossibly long string of silk scarves out of a hat, interior designer Karin Montgomery Spath has squeezed an incredible amount into this studio unit. In just 30m2, plus 7m2 of balcony, she’s aced owner Mary Fitzpatrick’s wish list. 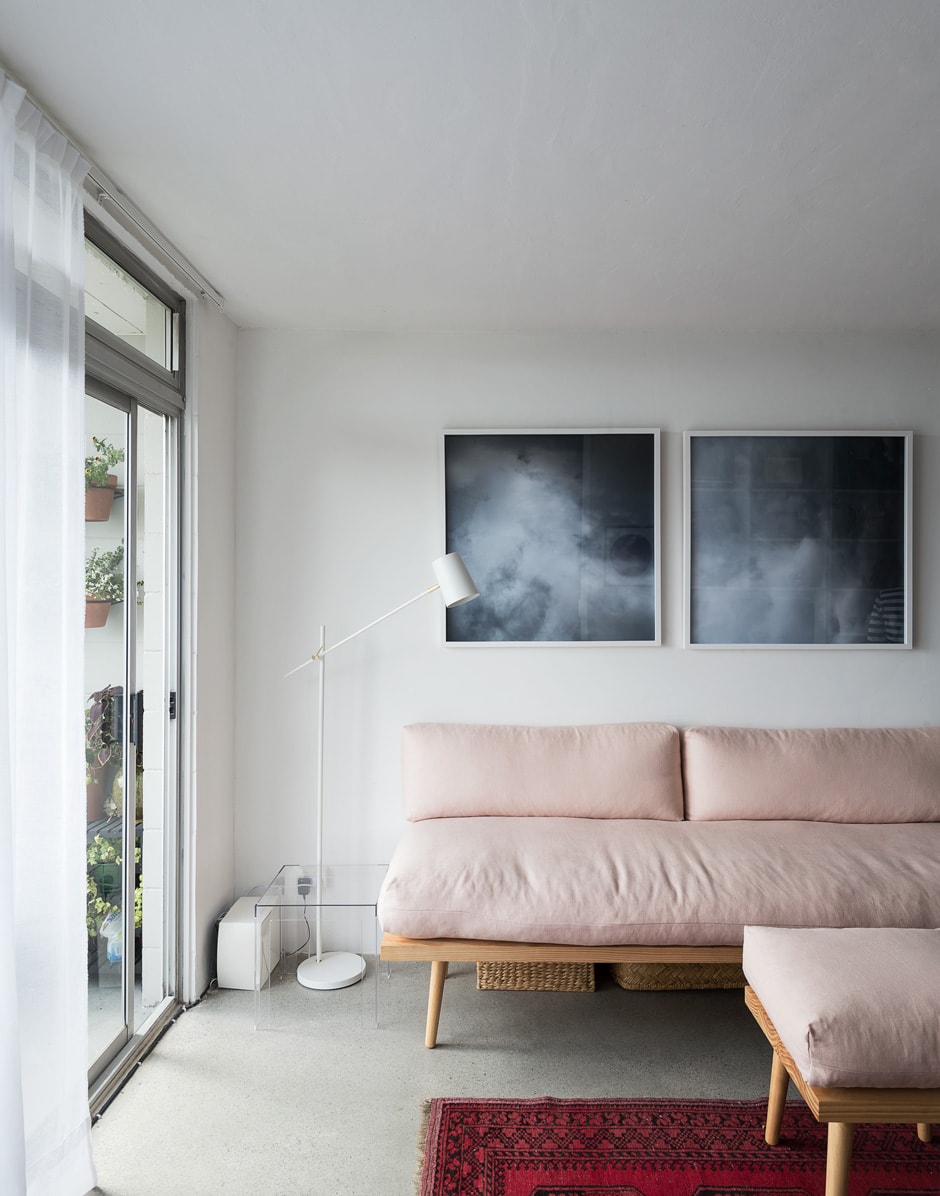 When Mary bought her end studio on Auckland’s Newmarket/Remuera border, it was in need of some TLC, but it was also affordable and in a lovely street, and had good light. “The block was built in the ’60s and was all concrete – it looked brutalist,” says Karin.
Whereas many would have stuck with the open-plan layout, key to the transformation was dividing the home into dedicated spaces. Karin commissioned a deep shelving unit to separate the living and sleeping areas, providing privacy, storage on both sides and cubicles for displaying décor items – including the TV, which swivels 180 degrees so it can be watched from the living area and the bedroom. “We developed a pull-down blind for it, so the wiring on the back isn’t seen,” says Karin.

Mary eats out a lot and the dining table can be used for food preparation, so the kitchen bench is just 1.4m long; similarly, says Karin, the bar fridge is “plenty for one”. The custom-made cabinetry overhead reaches to the ceiling.
Specially designed furniture is also crucial to this spatial success story. The sofa (which doubles as a bed for visitors) is on timber legs, creating more of a sense of space than furniture to the floor. On the other side of the divide, the king single bed is also on legs. Beside that is a wall-hung desk, which Mary paired with a piano stool she inherited from her father and finished with a fluffy cushion. 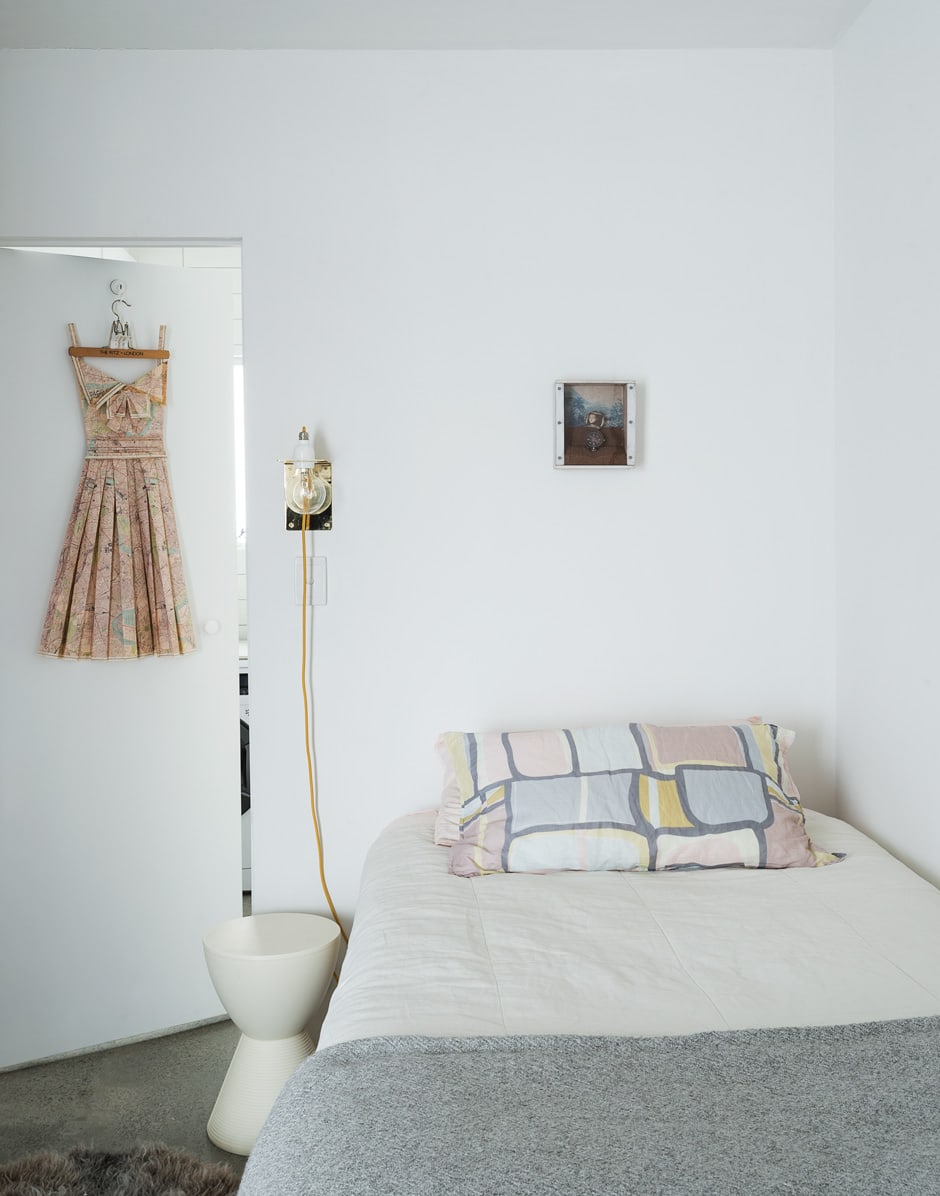 The home’s concrete-block walls were plastered and painted in Resene Half Black White, and the renovated bathroom has the same all-white palette. Moments of colour appear in the gilded kitchen, a ruby oriental rug, the millennial-pink sofa and the green front door, which echoes the plants in the vertical garden on the balcony.

This precisely measured – and rather magical – makeover has turned the studio from brutalist bunker to sweet retreat. “Mary loves it,” says Karin. “It’s her anchor – a place to call her own.” 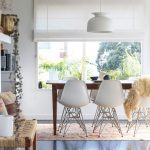 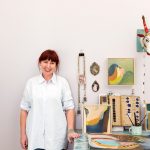