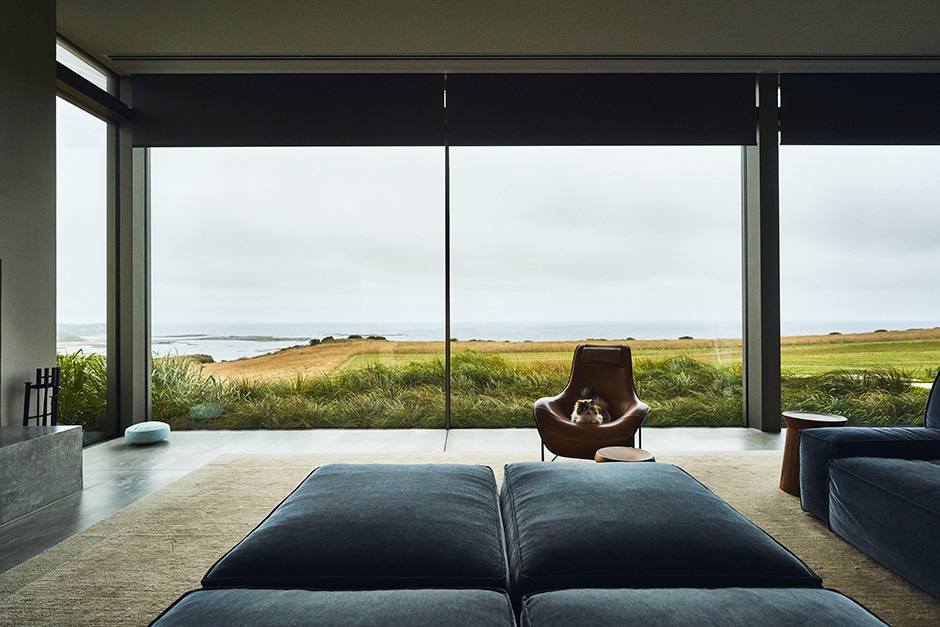 Come for the cats in this new book, stay for the porthole windows and other dope details. Below is an edited extract of some of our favourites.

TOP: THE CAT Esmeralda is a tortoiseshell Persian who’s seven years old and full of mystique. Her only indulgence is eating six tins of seafood a day. For a small cat, Esmeralda has a lot of presence. She fits perfectly into this household, as she’s easygoing and not highly excitable — she’s content to luxuriate in her surroundings on her own. Of course, it’s not hard to maintain a relaxed disposition when you live in a modern farmhouse with a boundless ocean outlook.

THE HOME Esmeralda’s owners wanted their home to be a simple structure with high ceilings and an orientation that would maximise every view. The resulting dwelling by architect Sue Carr of Carr has large windows that frame panoramic coastal scenes, which shift and change with the tides. Numerous spaces have been dedicated to the display of their extensive art collection, including a gallery hall. 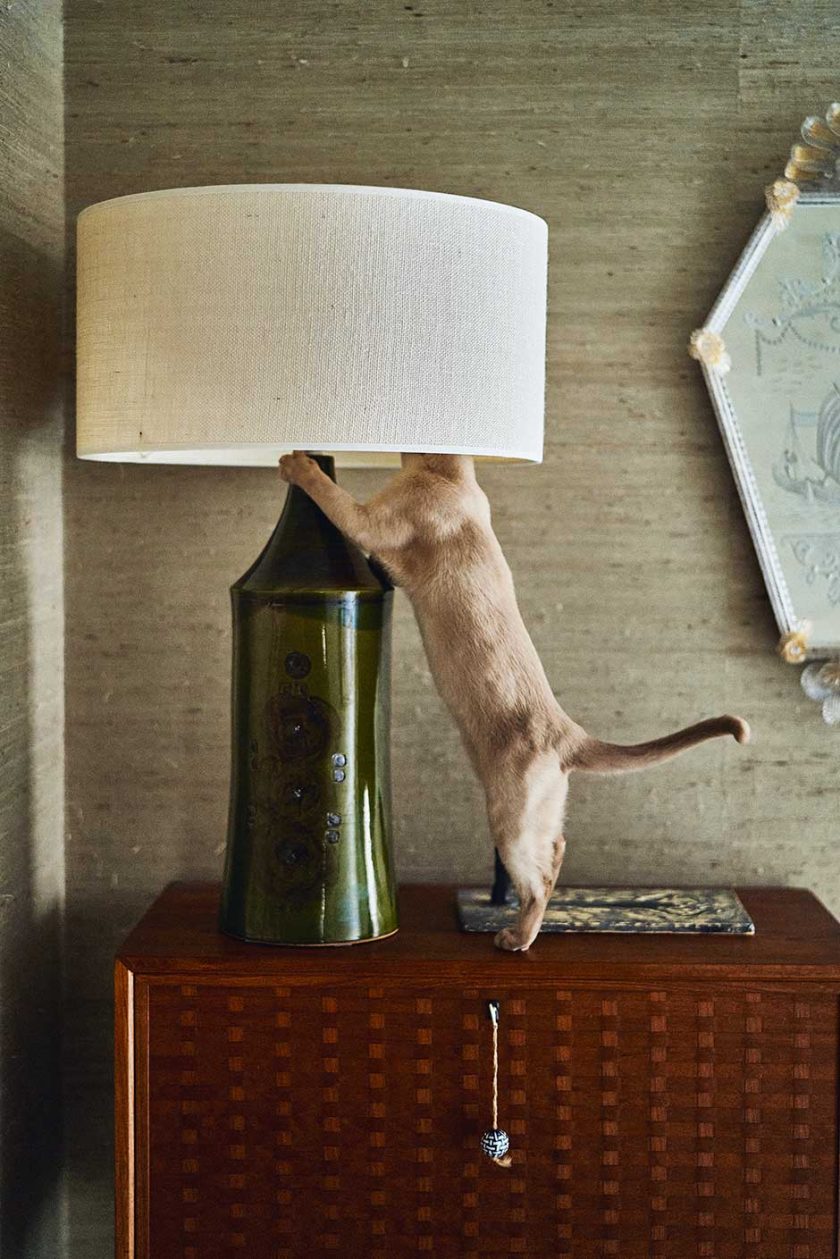 ABOVE: THE CAT Pud lives with a couple and is very much the third member of the family. Although generally well behaved, he does have a penchant for climbing into lampshades, which his owners believe is a display of mischievousness, rather than curiosity. Pud is only seven months old but very self-assured and sociable, and can usually be found anywhere his humans happen to be. He’s quite vocal, though luckily not as loud as some Burmese, and has certain routines he likes to stick to, including sleeping in his own room each night; he’s not the kind of cat who crawls over his owners in bed or wakes them up at 5am when he decides it’s time for breakfast.

THE HOME Pud’s Melbourne apartment is part of a 1960s modernist building set amid a leafy backdrop. The product of his owners’ professional lives — one is an architect, the other an interior designer — it’s like a nurturing cocoon. By B.E Architecture, the home was completely rebuilt from its structural shell and now feels like a villa in Venice, with its terrazzo floors and wheat-coloured grasscloth wallpaper. 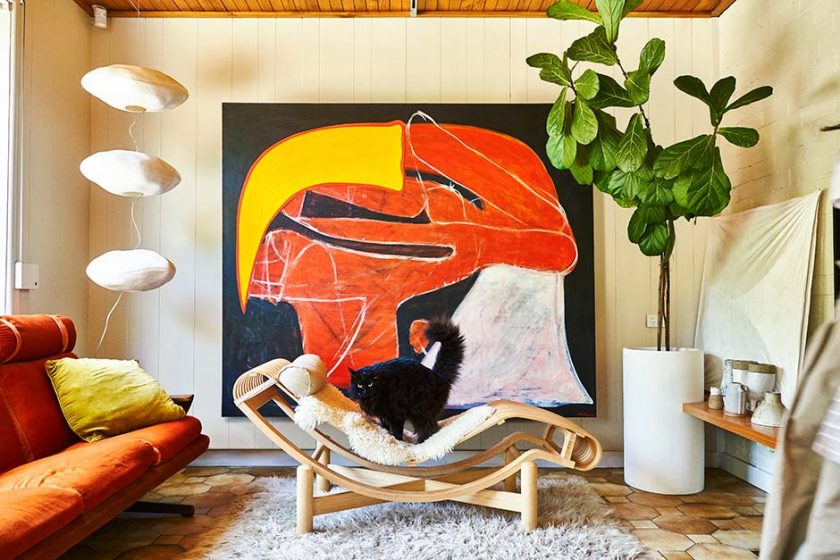 ABOVE: THE CATS Kobe and Kumi are six-year-old sisters — an apt gift for the homeowner’s twin daughters. In many ways, the cats are a true representation of the twins — their constant fighting, for example. Such kitty-capers can be very amusing to observe, but they’re certainly not encouraged. Kobe and Kumi make for great companions, often choosing to accompany their humans wherever they are in the house.

THE HOME By designer Adriana Hanna, this home belongs to an architect and serves as a visual diary of her admiration for both local and international 20th- century design. She delights in her collection’s perpetuity, knowing that one day the pieces will be passed on, so that others may enjoy them as much as her family has. Astute use of colour and texture is prevalent throughout, evoking a visceral and emotional response. Each room takes on a different palette or concept informed by its function: the main living space is light and vibrant, while the main bedroom is dark and enigmatic. 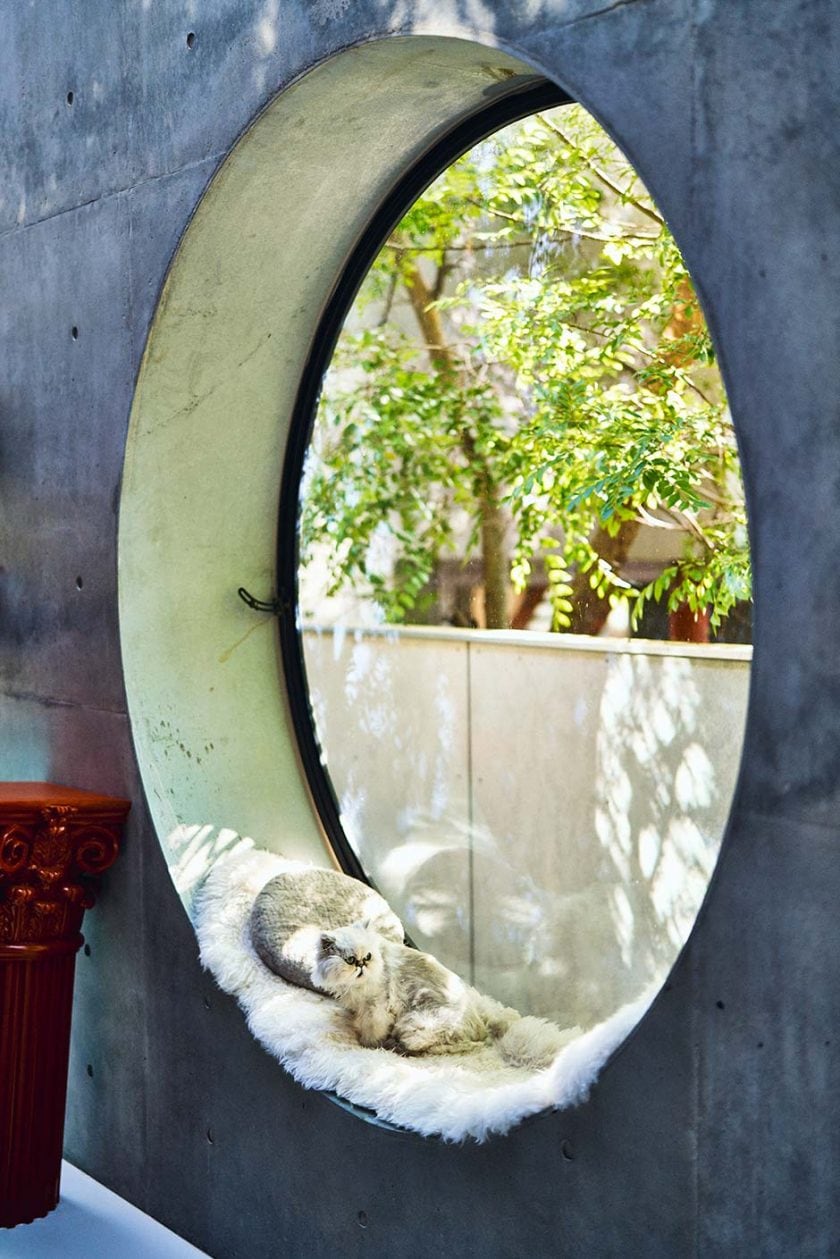 ABOVE: THE CAT Hercules was a gift for his owner’s 35th birthday. Collectively, the family decided that they needed the love of a cat — specifically, a cat who also wanted to be loved. This led them to select a chinchilla, a Persian breed that has silky, silvery hair, green eyes, and a docile and affectionate nature. Now nine years old, Hercules is happy to have time and space to himself when the family is out, but he’s equally content to lounge with them on the couch when they’re home. He often seeks out the security and warmth of his owner and enjoys nothing better than lying on his chest, relishing the feel of his human’s heartbeat.

THE HOME The owner of this house, Billy Kavellaris of KUD, is also the building’s architect. He wanted to design a house that reflected his family’s values and aspirations, where they not only live among the art they’ve collected, but also where the architecture itself is a work of liveable art; there are plenty of nooks for Hercules to explore and inhabit. In choosing materials for the home, Billy wanted to enhance and balance the tension between contrasting elements — organic and industrial, textured and smooth, tactile and abstract — in order to create an engaging building and spaces. 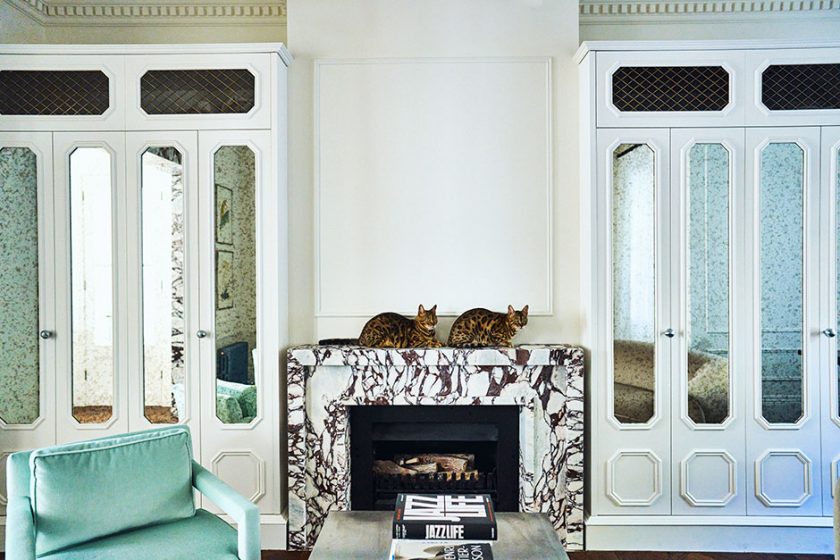 ABOVE: THE CATS Bengal cats are for level-10 expert cat owners only! More akin to young children than animals, they’re very high- maintenance. Then again, it’s hard to stay annoyed at kitties as cute as Raphael and Fellini for long — and no matter what, they always end the day with a snuggle in bed with their owners.

THE HOME The inhabitants of this house in one of Sydney’s oldest streets wanted it to have a European influence, so they enlisted a designer with an eye for French and Italian antiques, Tamsin Johnson of Tamsin Johnson Interior Design. Unfortunately, Raphael and Fellini are rather fond of scratching the furniture, so they installed French doors between the kitchen and living area for peace of mind when they’re not home. The opulent interior also features parquetry, terrazzo and a marble staircase with a wrought-iron balustrade, as well as detailed beading and antique Murano light fittings. 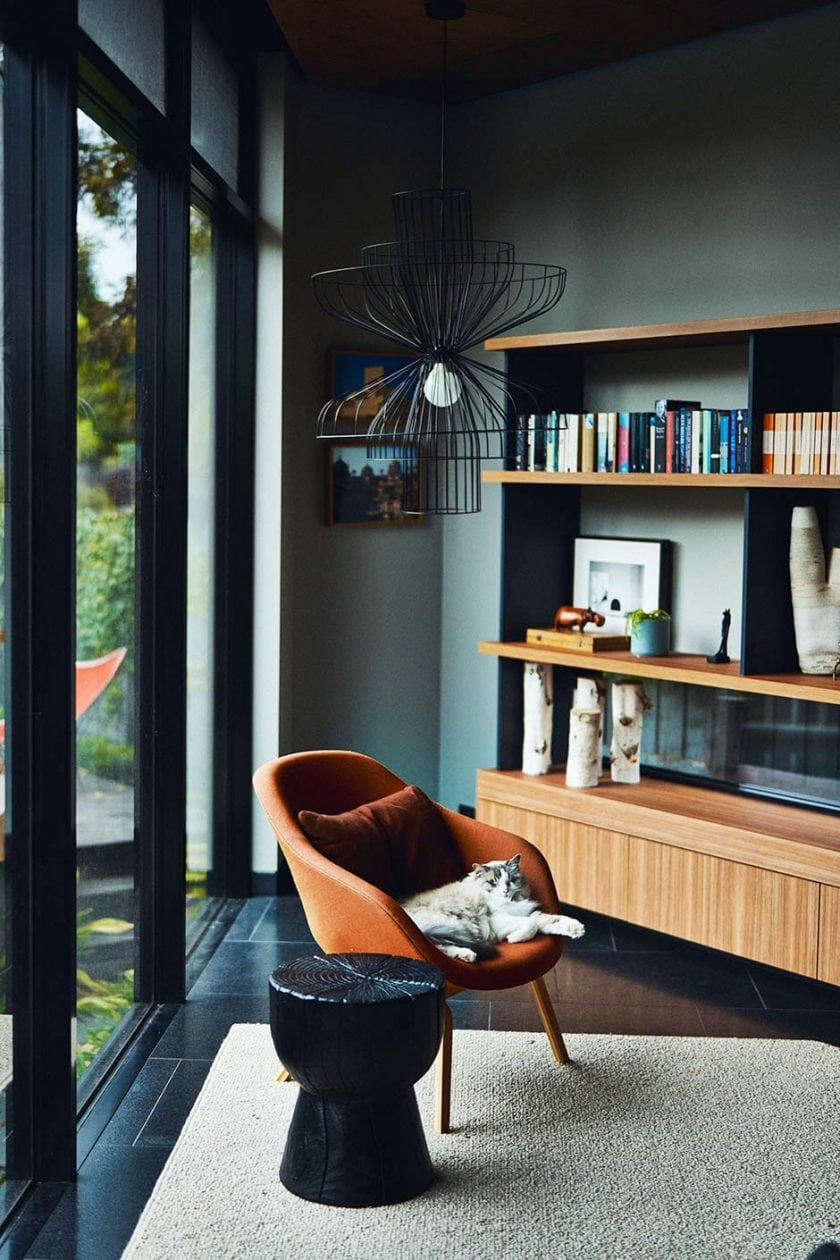 ABOVE: THE CAT Now 10 years of age, Humphrey joined his owners as a tiny kitten, just a couple of months after they were married. The couple were looking for a playful, affectionate cat, and a friend recommended getting a ragdoll. Humphrey’s family has grown over the years and, true to his breed, he’s very tolerant of the children and happy when they play with him — his favourite game is ‘fetch’. He also loves to stretch out his ample body to full length for a tummy scratch.

THE HOME Hard-wearing and easy-to-clean surfaces were a must in this family home by architects Richard Fleming and Anja De Spa of Molecule Studio. These have been balanced with warm timber finishes and tonal paint colours to ensure it retains a comfortable and welcoming atmosphere. One of the unique elements in this house is a spiral staircase within a double-height void, which provides a lovely transition between the energetic living areas downstairs and the intimate sleep spaces upstairs. 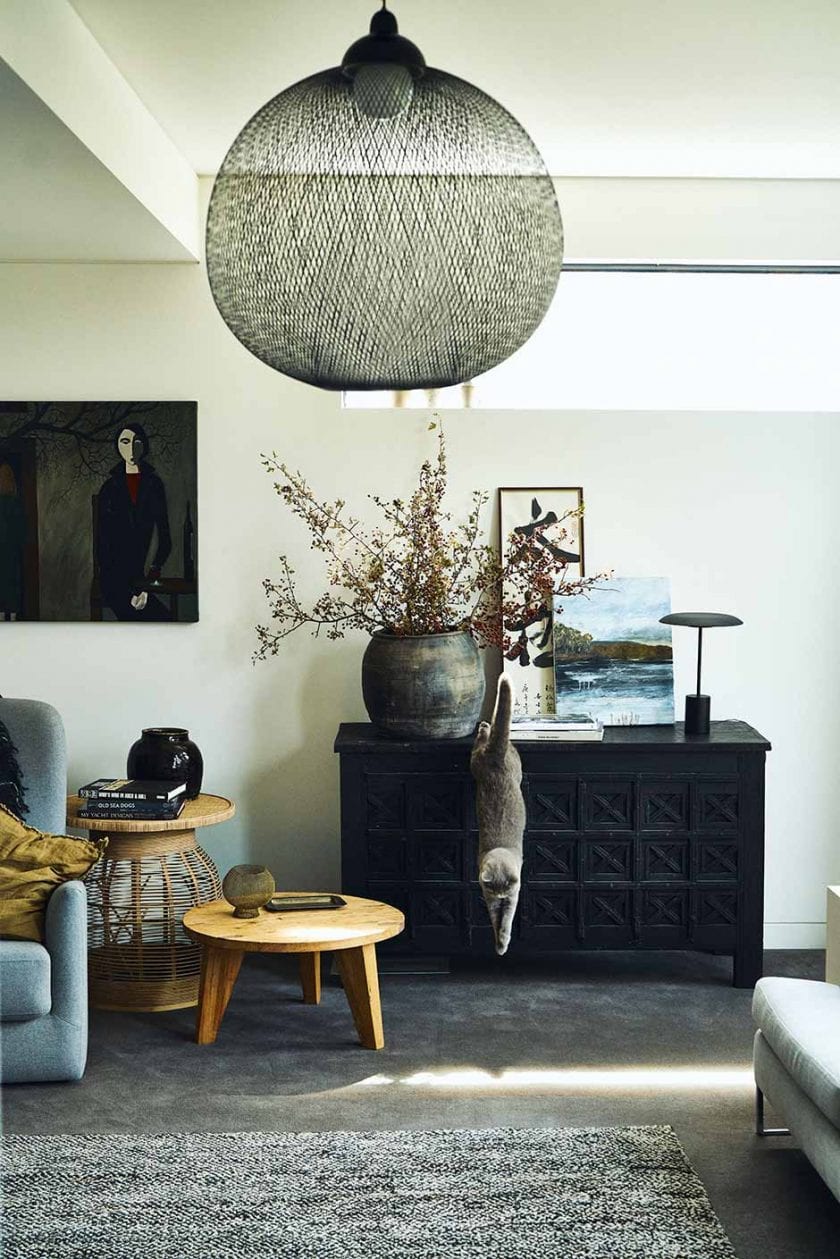 ABOVE: THE CATS Ted’s the cheeky new kid on the block in this home. He likes to jump on his wary companion, Pippi, and torment her. Almost 10 years his senior, Pippi is much older and wiser, and doesn’t always want to play his games; however, this pair of British shorthairs do like to keep each other company when no one else is around.

THE HOME From the street, this house by architect Anne Hindley of Hindley & Co appears to be a simple 1960s dwelling, but its owners have added an eclectic extension at the back, designed primarily to allow more light into the home. An Italian marble dining table takes pride of place in the dining room and was chosen for its style, quality and luxurious feel. At dinnertime, Ted hovers around hoping for any tidbits that may be on offer, but he rarely has any luck. 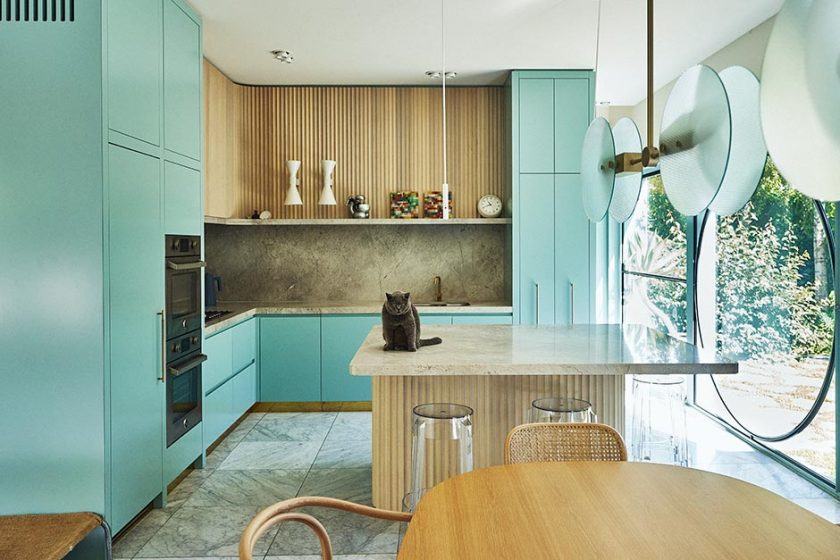 ABOVE: THE CAT A 10-year-old British shorthair, Molly was actually a surprise birthday present for her family’s eight-year-old son, and they’ve bonded ever since. She was once so tiny, she could almost fit in the palm of his hand — now, a decade later, the much bigger Molly mostly lazes around her home, but still ends each day by visiting her favourite person’s room before bedtime to get her fill of love and affection.

THE HOME The transformation of Molly’s home — a classic Victorian-period dwelling with additions made in the 1980s — was achieved by architects Kennedy Nolan through careful editing and intervention. Colour and texture were used wherever possible, along with bold, graphic gestures, to serve as a counterpoint to the more traditional features of the architecture. The colour palette, which strongly references the Swedish Gustavian style — cool and quiet, but with added playfulness — ensures the various parts of the home feel unified. 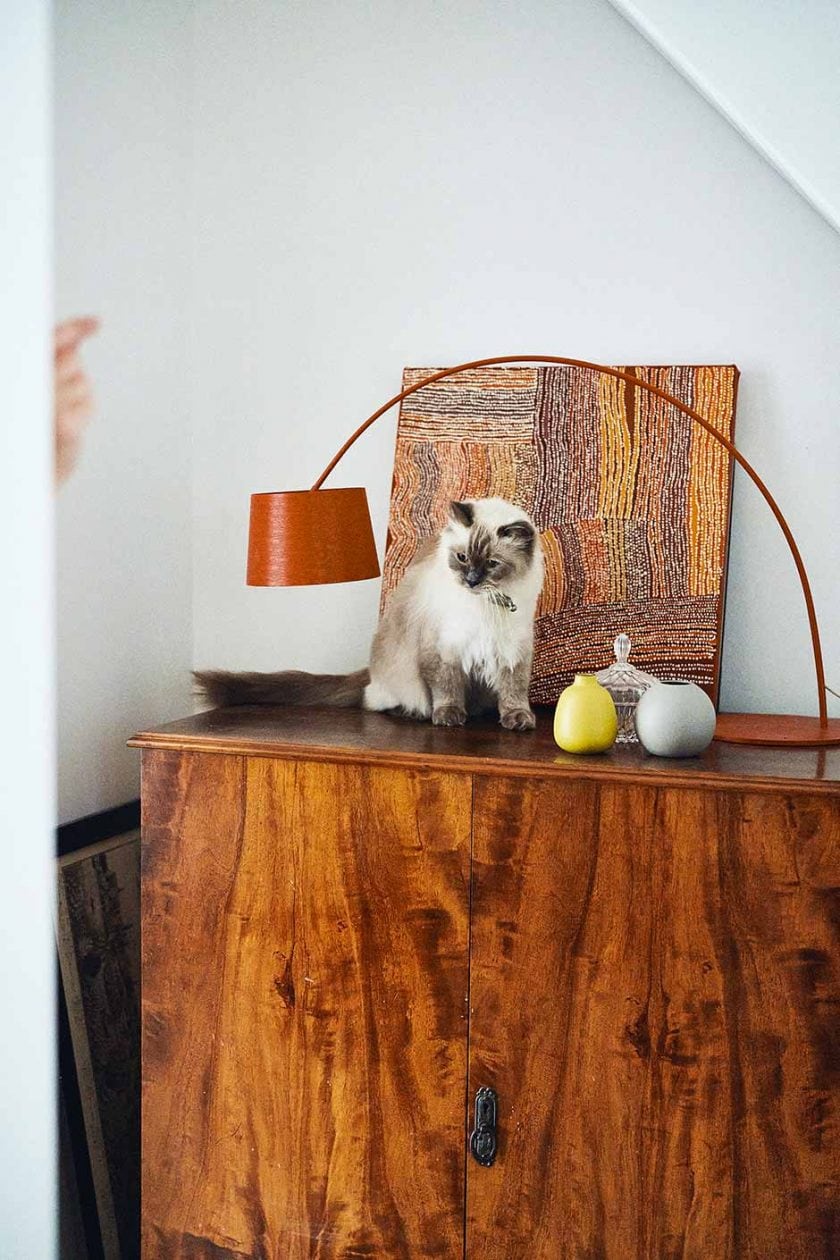 ABOVE: THE CATS Wolfgang, Minnie and Zaza complement the madness of life in a household with five humans plus Alfred the miniature dachshund. Visitors frequently pop in and out, but despite the open-door policy, the cats remain happily housebound, and guests love them because they’re so inquisitive and friendly. Zaza, a timid six-year-old calico rescue cat, has been around the longest. When the family decided to get a feline companion for her, their intention was to adopt one ragdoll kitten — but when they saw Wolfgang and Minnie, they realised they couldn’t leave either of them behind.

THE HOME This heritage-listed terrace home had only two bedrooms and a half-finished bathroom when the family moved in. It was in a dilapidated state but retained some of the original detailing, including ornate ceilings, windows with coloured glass, and kauri floorboards. Updated by architect Emma Rees-Raaijmakers of Atelier Dau, the house is brought to life by the sculptural spaces, the detailing of the original terrace, the theatrics of the tall steel doors that open onto the courtyard, and the views of nature at every turn.

Edited extract from Where They Purr by Paul Barbera with Queenie Chan (Thames & Hudson, $70). 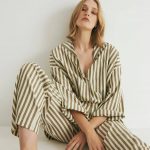