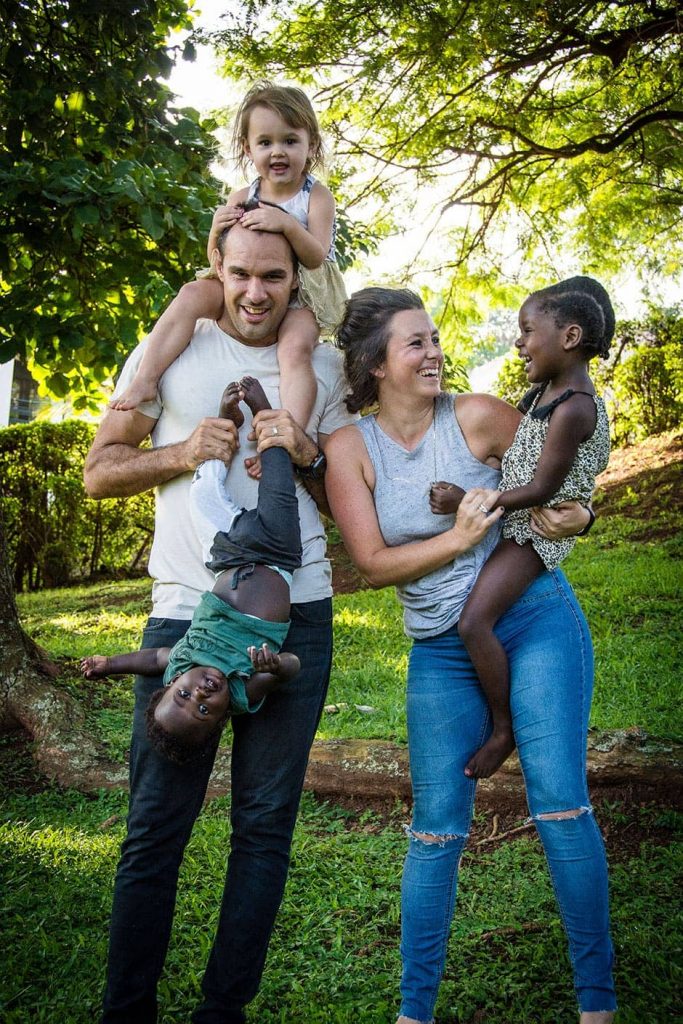 These New Zealand aid workers spent six years in Uganda. We were lucky enough to visit them before they moved back to Aotearoa.

For Helen and Timothy Manson, the saying ‘Home is where the heart is’ couldn’t be more true. After spending half their married life in Aotearoa, the remarkable couple relocated their love to the most unexpected of places — Uganda, East Africa.

Home to some 43 million people, Uganda is a world away from the safe New Zealand suburbs Helen and Timothy were raised in, but they’ve created something equally special for their children Hope (5), Eva (4) and Maz (2). “This house is our haven,” says Helen. “When we walk in the door, we take a deep breath in.”

Located in a gated compound on a hill in Uganda’s capital, Kampala, the two-storey, three-bedroom home is a relaxing retreat in which to escape the intensity of the bustling streets below — not to mention Helen’s job as a freelance humanitarian photographer and storyteller for NGOs and non-profits in 35 countries, and Timothy’s as country director at Tutaona, an organisation that provides trauma rehabilitation services for people affected by war in Uganda and Iraq. Open and light, it’s a fusion of white and wood, the Mansons having bucked the local trend by forgoing colour in favour of whitewashing the entire house.

“Other expats lived here before us, so the interior was quite tired with lots of different paint colours and pieces of furniture left behind,” says Helen. “We threw out 13 bags of trash the day we moved in! Then we painted everything white, top to bottom — a bit of a risk in a country renowned for its red dust.”

To maximise the light in the living area, the couple opted to go without curtains, which also sees the family more in tune with nature’s rhythm. Speaking of the sun, Helen says tiled floors are a necessity. “The temperature is a glorious 270C year-round. In the six years we’ve been here, I’ve only seen carpet once.”
Without the abundance of homeware stores she and Tim were used to, perfecting their interior has required patience. “We’ve had almost every single piece of furniture custom-made, working with carpenters, furniture makers and artisans to bring our home to life by showing them sketches or pictures torn from magazines of things we wanted,” says Helen.
It hasn’t just been about sourcing what’s on trend, though. “The unique way of life here inspires my interior style. Two of our children are Ugandan and I want our home, no matter where we are, to reflect their African heritage.” 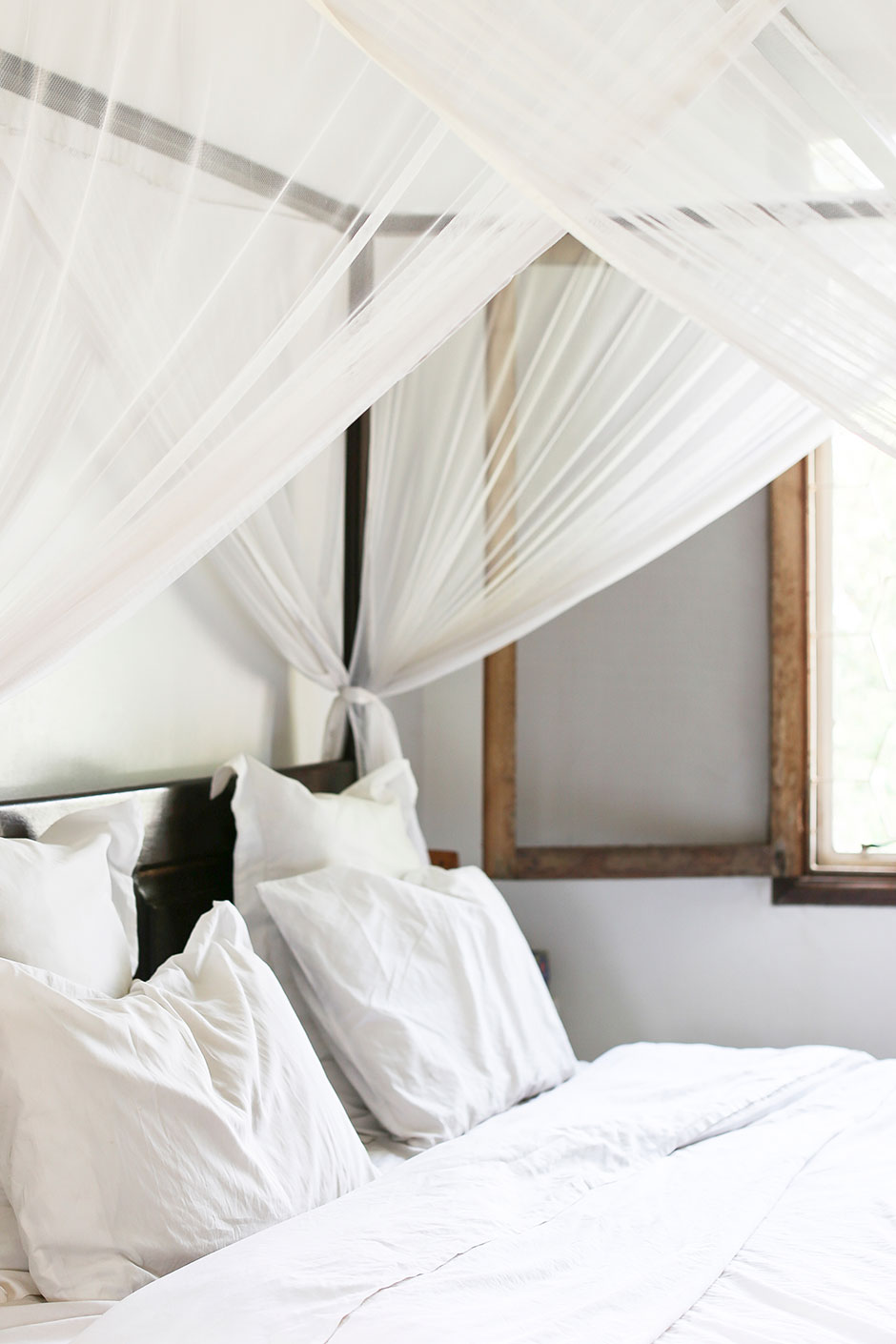 In this hot climate, the family typically lives with their doors and windows wide open, the sun pouring in along with a balmy breeze. Most of their time at home is spent hanging out on the deck, and dinner is typically cooked on the barbecue, with a mat laid on the ground for the kids to plonk down and eat on between bike rides around the compound.

“It’s pretty relaxed,” says Helen. “Five o’clock is my favourite time of day because it’s when Tim comes home on a boda-boda [motorcycle taxi]. We debrief on the day while jumping on the trampoline with the kids, then Tim and I watch them play as the sun sets behind us. It’s the best.” 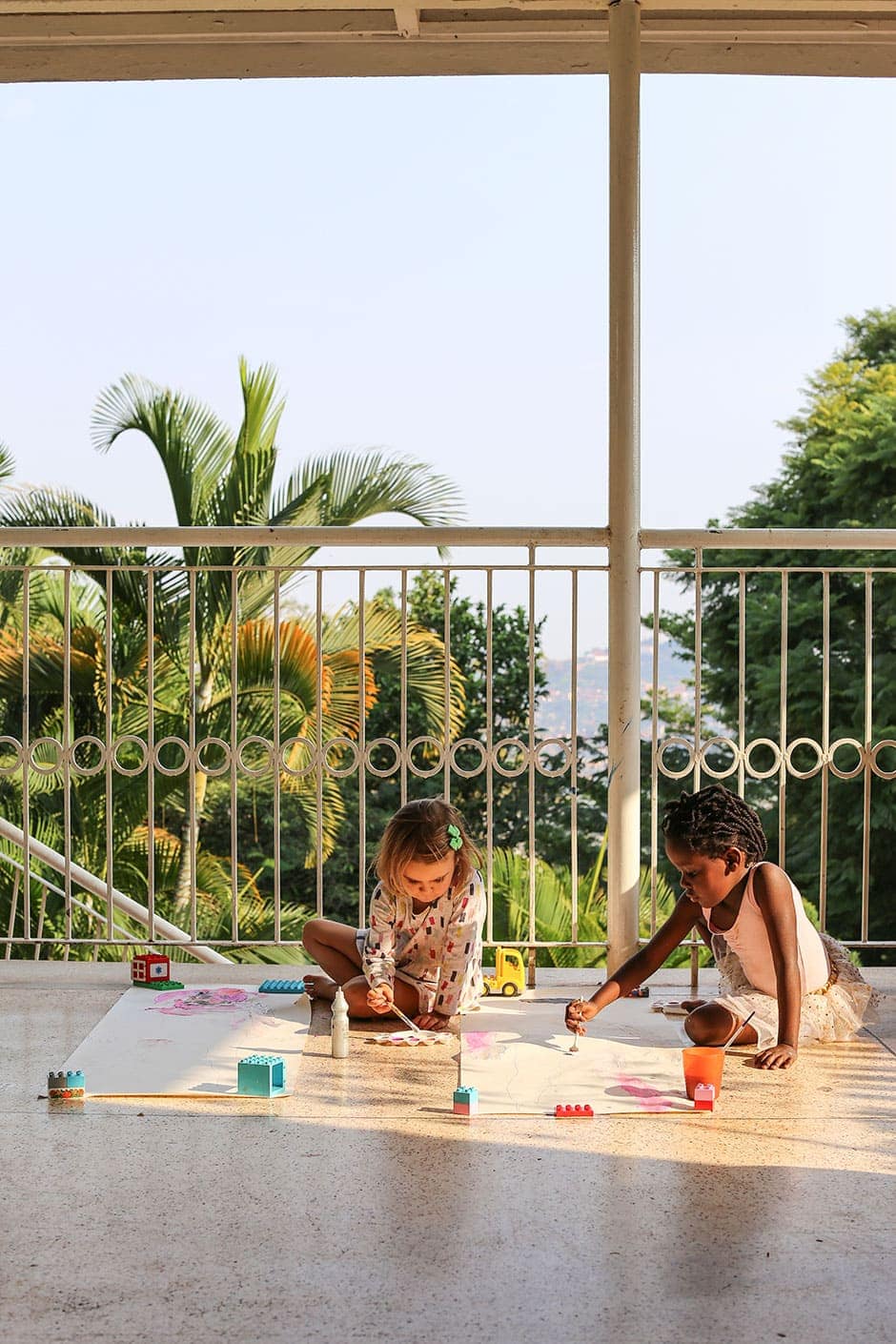 Helen says the balcony is her favourite place in which to get away from it all. “It overlooks our lush front garden, the city beyond us and the hundreds of birds that fill the sky. On the balcony we’re somewhat removed from the pollution, smells and sounds of the city and can enjoy the view with just a background hum.”
Make no mistake, however — it’s not all peace and tranquility in this house, and Helen has her fair share of outrageous stories to share about the reality of life in Africa. “One night, I was lying in bed with seven-month-old Eva when I noticed there was a rat wrapped around her head trying to eat the mattress! Tim was away at the time, so I had to attempt to kill it myself. We’ve had poisonous insects inside the house and snakes on the compound too, so we’ve broken a few brooms. The power goes out on average twice a week for an indeterminate amount of time, and the water goes out about once a month. You just have to laugh and find a way around it.”

Incidents aside, Helen and Tim say this is an amazing place in which to raise their children, where they can do most of the things typical Kiwi kids do, including adventure and explore. “They can run buck wild outside in the protected compound,” says Helen. “It’s where they’ve learned to ride bikes, swung from the trees, played in the dirt. It’s a safe place in a city that can feel all-consuming.” 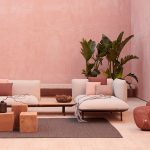 NextA textural tile collection with a sense of longtime patina 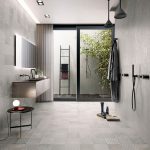