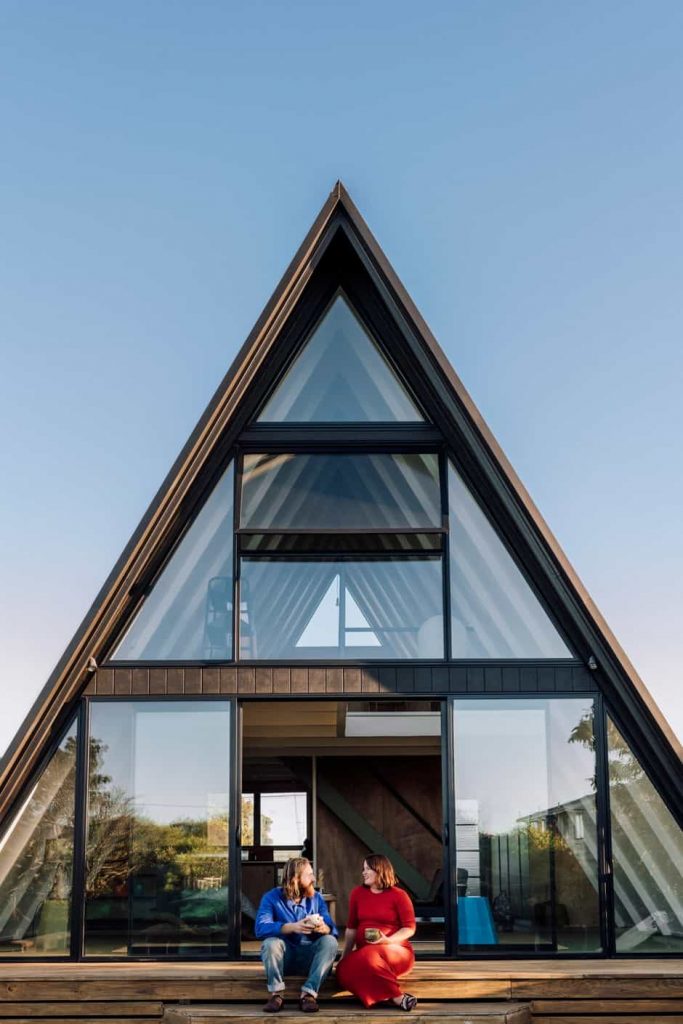 As you can see, when it comes to this home, A is for absolutely awesome.

The stress of renovating can drive a couple apart. In the case of Sammy-Rose Scapens and Oliver Starr, it’s what brought them together.
After purchasing an A-frame home near Tauranga’s Papamoa Beach, Sammy-Rose set about searching for a builder to transform it into the light-filled loft of her imagination. The 90m2 house was in need of a total refurbishment.
After a month of interviewing local builders, she was no further ahead. “I had about 20 builders come around to look at the house and nobody wanted to do it,” she says. Widening her search, she sent a text to friends. “One replied and said, ‘My friend Oliver’s a builder – you should give him a bell’. So I did and he said, ‘I could be keen, I used to live at the Mount’. He came down and that was that – we fell in love.”

The house has been a passion project for freelance writer Sammy-Rose, who’d spent months hunting for an A-frame home to buy. “I’ve always liked the structure of them,” she explains. “They’re designed to be 60 degrees by 60 degrees by 60 degrees, so they’re perfectly symmetrical. They point to the sky and the earth – and I like that as a poetic concept.”
Somewhat unusually, her attraction to the architectural style – typically found in holiday homes built in the ’50s through to the ’70s – came from studying the graphic nature of the alphabet. Having completed a Masters of Creative Writing at AUT and published a book on the topic, she was determined to take her interest a step further. “I’ve always been interested in the grapheme nature of each letter. I thought I’d start with the letter ‘A’ and carry it through to the house.”

Travelling in Japan when the house came up for auction, Sammy-Rose placed her bid by phone. The interiors of mid-century Japanese A-frames later came to influence the fit-out, which she designed. “In Japan, everything’s very functional and beautiful. I wanted to create a space with interesting lines that I could live in and have as a working studio.”
Her vision included lining the ceiling and walls with plywood, mimicking the use of timber in Japanese cabins. “But because the rafters had moved and warped in the sun, we couldn’t get ply in between them,” she says. This was just one of many challenges she and Oliver faced due to the unique nature of the building. 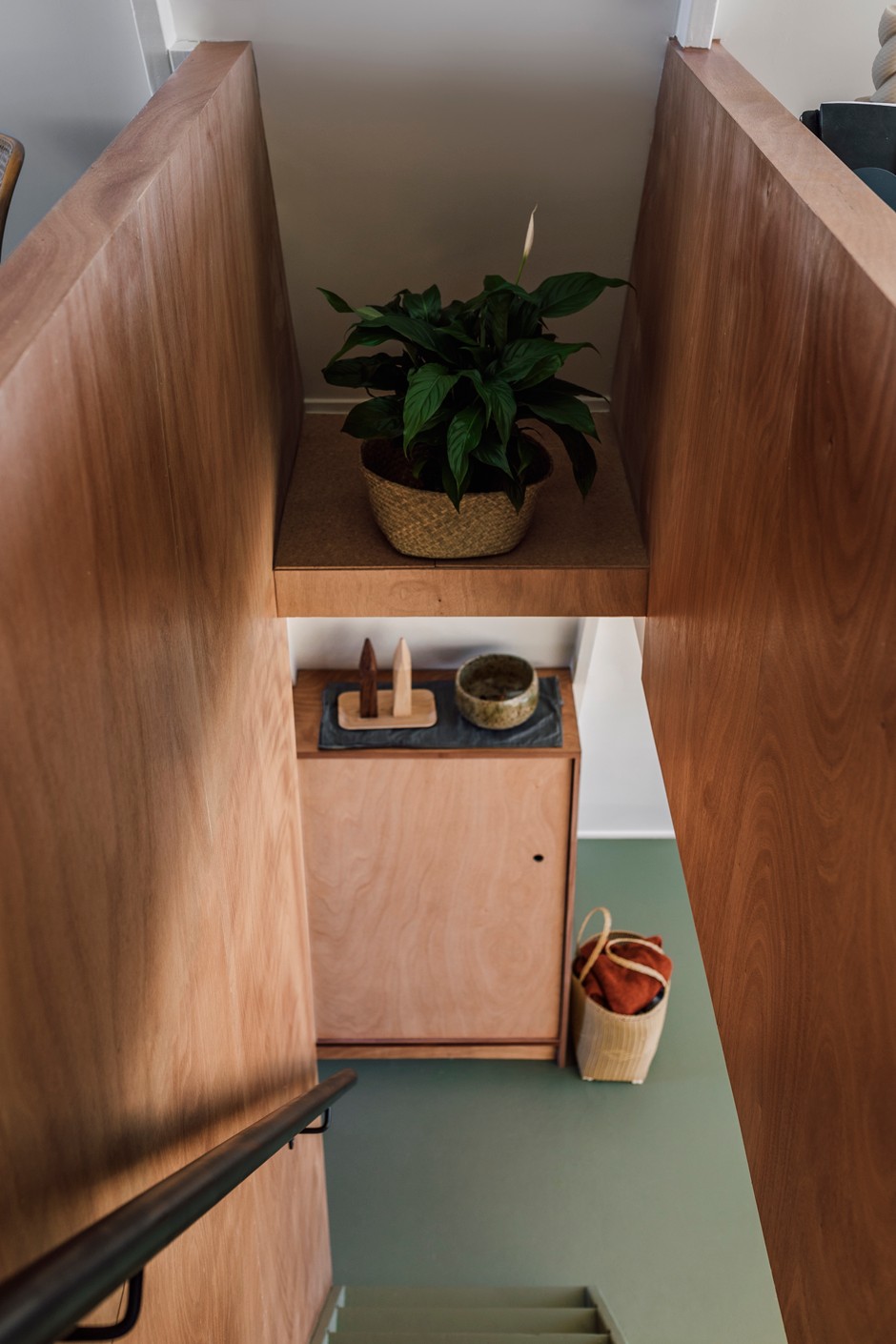 Thanks to the sloping angle of the walls, sourcing off-the-shelf cabinetry and furniture wasn’t possible. “We’re pretty limited in what you can purchase in New Zealand,” says Oliver. “Getting pieces purpose-built felt like the only option.” So they employed the expertise of Auckland furniture maker Sam Orme-Gee. The resulting built-in kitchen and living room storage cupboards are beautifully streamlined and really make the most of the available space.
A feeling of spaciousness was created within the modest footprint by a slight adjustment to the original floorplan. “The only modification we made was to take out a piece of the second floor to create a void,” says Oliver. “This naturally divided the front half of the house into two separate areas, where we put a reading room and a study area for work. It feels like a loft house and there isn’t much sense of separate living/work/sleep areas – it’s all very communal.”

It’s at the back of the house that the most dramatic aspect of the renovation is apparent, with the exterior wall replaced by windows in a geometric grid. This has let in more light – but not too much. “The beauty of this A-frame is that it’s positioned so the sun only comes in so far, so in winter it comes halfway in and in summer it doesn’t come in at all,” says Sammy-Rose.
The restrained use of materials and colours throughout the open-plan interior brings a sense of cohesiveness. Sammy-Rose turned to Swiss-French architect and painter Le Corbusier’s colour concept theories in the selection of Resene Villa White for the walls and ceiling and Resene Woodland for the floor and stairs. She says the harmonic combination of colours with similar undertones “feels really earthed”, and the exterior, in Resene Bokara Grey, emphasises the strong lines of the A-frame and is Brutalist in appearance.
For Oliver, the most satisfying part of the renovation was “starting with a reasonably fantastical idea and then achieving it. Often you start with a grand idea and it slowly gets watered down. With the A-frame, we never compromised, or if we had to change something, we’d spend days looking for an alternative or better solution.”

The couple moved in a year ago, and soon after these photos were taken welcomed their first child, Eugene. The house is now too small for the young family, so a new build has begun on the subdivided section. It’s not an A-frame this time, but the form still has a fascination for Sammy-Rose: her next dream home is a concrete A-frame. “I’m trying to convince Oliver to go to uni and become a structural engineer so he can build it!” 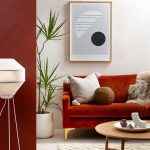 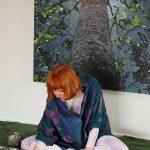