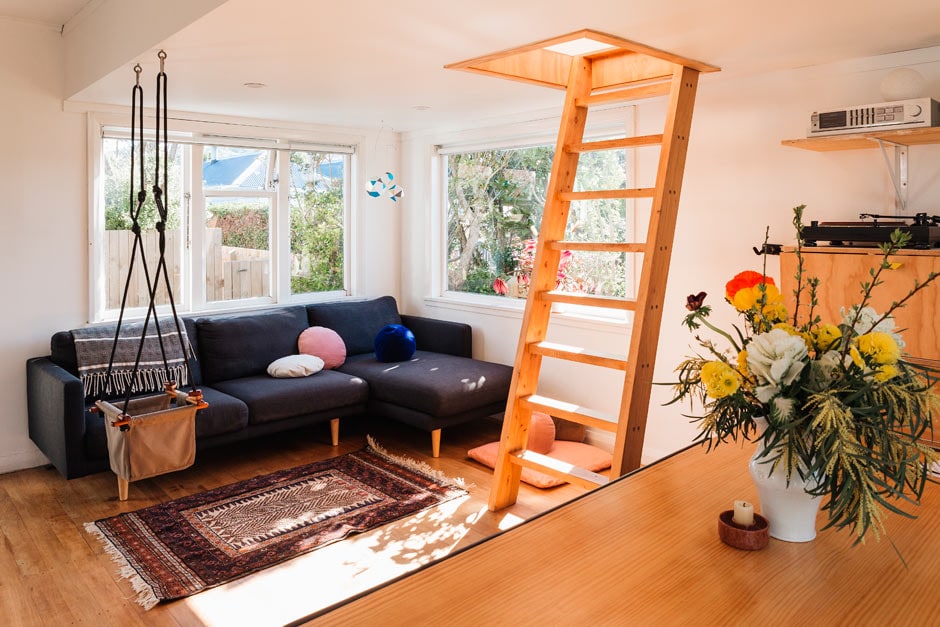 This cottage may be teeny-tiny, but it’s all the more beloved for being full to the brim with family, creativity and music.

Thirty-four square metres. Let that number sink in. Then imagine living in this diminutive dimension as a family of four. Suni and Maz Hermon and their two boys, Otto (5) and Angelo (2), make it work. Sometimes it’s hard, but many other times, the couple is grateful for this journey that connects them to family, to land and to their future.

Their property in the Wellington suburb of Berhampore once belonged to Maz’s grandparents, ‘Chubby’ and Yvette, who emigrated from Sri Lanka. As a young child, Maz would explore the lush, jungly gardens of trees and shrubs grown from cuttings, and sometimes even got to hang out in the single-level weatherboard cottage – fondly known as ‘the bach’ – that was his grandfather’s hideaway.
Fast forward 30 years to when Chubby passed away and the couple, who flatted close by, would visit Yvette on a daily basis. The little guest cottage still stood in the garden. “It was beautifully set up with cosy furniture and old magazines, napkins in the kitchen and samples of soap in the bathroom,” says Suni. The pair, who at that stage had one child, thought moving in might be a win-win situation, providing both somewhere to live and proximity to Yvette, who was by then in her late 90s.

They asked their friends Tim Gittos and Caroline Robertson of Spacecraft Architects for their thoughts. “Over time, a plan evolved where we would subdivide off the rear of the section, buy it from Yvette and do a few little improvements to the bach,” says Suni.
Nerves started to build. Would it be too much of a squeeze? They pressed ahead because the idea sat well with their family values, and put their faith in their architect mates.
“Maz and Suni hadn’t imagined the possibility of going up,” says Tim. “They assumed they’d all be stuck together on one level.” When Spacecraft suggested they drop the ceiling to pinch enough space for a loft bedroom (without having to build more walls – just a band of windows and a small roof), it was the perfect solution. “It helped keep construction time and costs to a minimum, and the psychological separation of going up a level makes a big difference to the sense of space,” says Tim.

To stick to their tiny budget for their tiny house, Suni and Maz also got stuck into some non-structural work. Downstairs, they installed a wall to partition off the shower room from the kitchen, where they tore out the existing cupboards and put very narrow shelves in their place, and built a bench unit with a sink, electric oven and two-burner gas hob found in a boat-supply store. They sanded the floors, painted and added a deck.
And just like that, they had their first home. Settled on a rise on its 164m2 site, the reformed abode looks over the established garden towards the city. It’s north-facing, sunny, and theirs. “If this was somewhere in a dark valley, it’d be a different story,” says Suni. “Its location is one of the elements that make it work.”
Disciplined design is another. All the storage is in one place: a plywood unit attached to the living room wall, with doors that open out, fold down, then clip back. Suni made it herself. “It’s probably not the best craftsmanship, but it has all of our clothes in it,” she says. 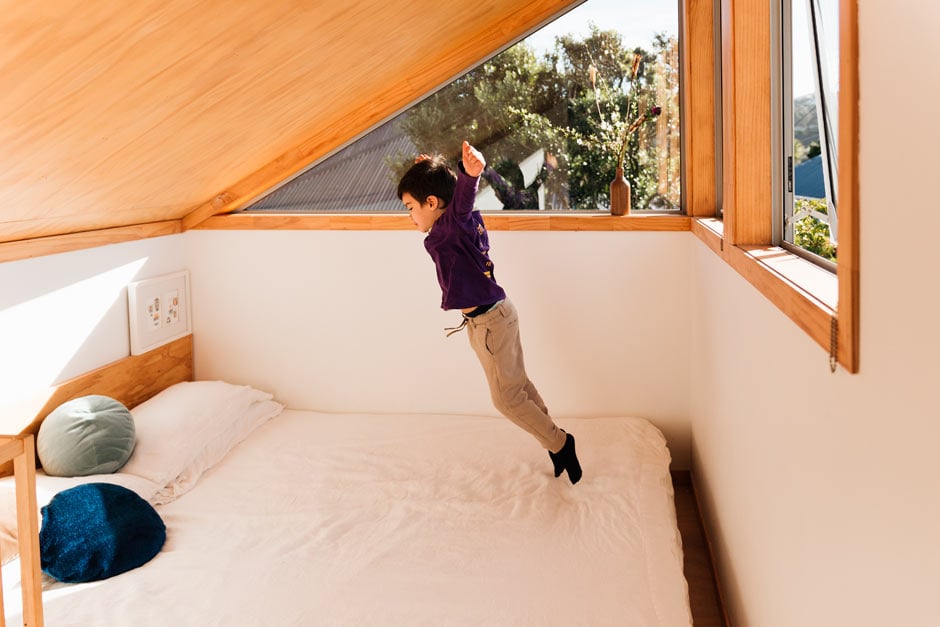 Downstairs, the spaces are dynamic. “The uses for them change hourly,” says Suni. One afternoon, Otto might be busy at the dining table with paper and glue, while Angelo has a painting project on the go; the next, Suni might be using it as a work surface for photography. (“My sister-in-law Ali Johnson and I run a business called Sphaera. She makes cold-processed soap using fine clays and plant butters, and I support her as the designer and brand manager.”) At night, when Maz arrives home from his job as a web designer and developer, it’s all packed up so the family can enjoy meals together.
Maz, who commutes to the city, regularly retreats to a shed in the garden that’s set up as a laundry and music room. In it there’s a big amp, guitar, keyboards and a computer to bring it all together. The sound of his creativity often drifts over into the cottage.
While the other spaces must be flexible, the loft, accessed through a trapdoor, is reserved for the sole purpose of sleeping. It might sound fun for two young boys to head to their room via a ladder, but how do the adults fare? “It’s an intimate space,” admits Suni. Angelo was born after they moved in, so they’ve had to adapt to a newborn and a toddler’s sleeping patterns. “There are pros and cons to all being in one space, but it’s such a calm environment and the children feel very close and comfortable,” says Suni.

The Hermons are aware that their lifestyle has been shaped by their home. Sometimes, when they return after visiting friends, the proportions seem small, but that feeling quickly fades. Living here has changed them in numerous positive ways. An accidental outcome is that they’ve learned the joys of minimalism and owning only a few pieces that are well-made, beautiful or meaningful.
“When you think about what we’ve done in the context of where we’re at in New Zealand with housing, it’s interesting,” says Suni. “Were it not for our architect friends encouraging us and pushing the project through various stages, we probably wouldn’t have been brave enough. But we’ve managed to carve out a lovely home in a beautiful spot that we’re really connected to.”
One day, when funds allow, they’re going to build a ‘bigger’ 80m2 house. Meanwhile, it’s undoubtedly their philosophical approach that has made this one larger than life. 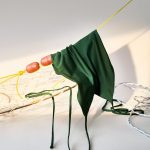 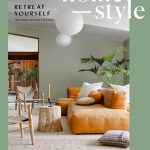