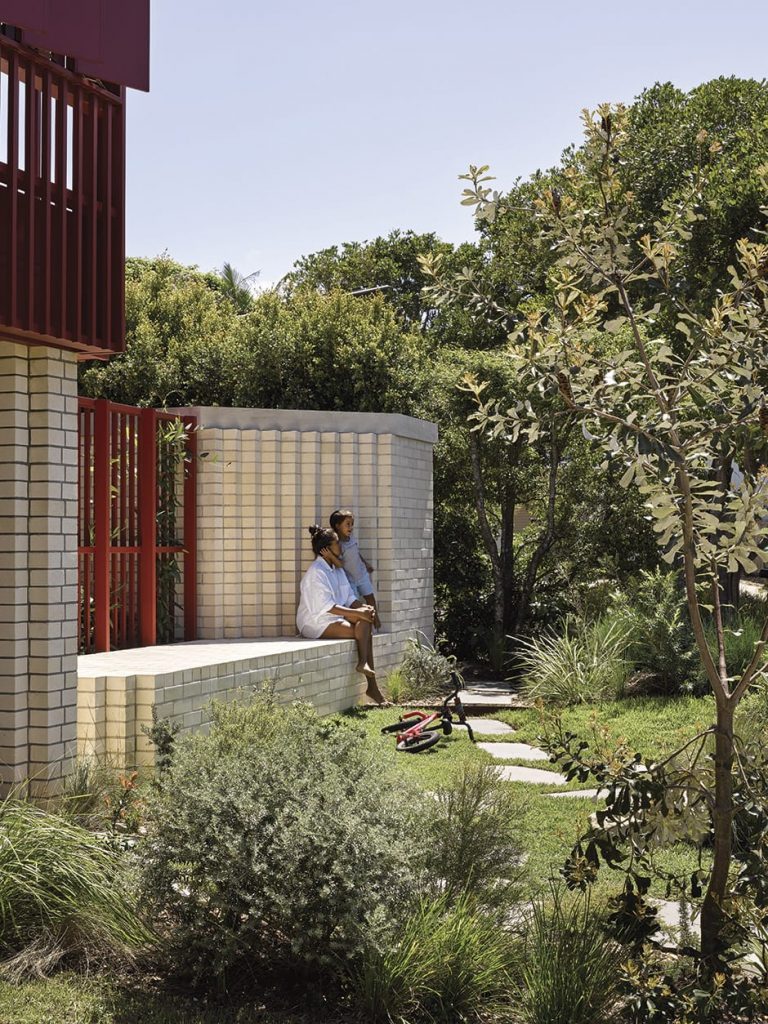 Here’s an extract about one of our favourites, Casuarina House by architects Vokes & Peters.

Located in a quintessential suburban cul-de-sac, this home is anything but typical. Aside from this almost entirely red dwelling being in stark contrast to the surrounding homes, the generous setback of its front fence and the peekaboo views into a sizable native garden set this property apart. Its owners Andrew Coates and wife Manzuma joined forces with architect Stuart Vokes of Brisbane-based Vokes & Peters to plan a home that would fulfil the needs of their expanding young family and their desire for a quieter life on the northern beaches of New South Wales. 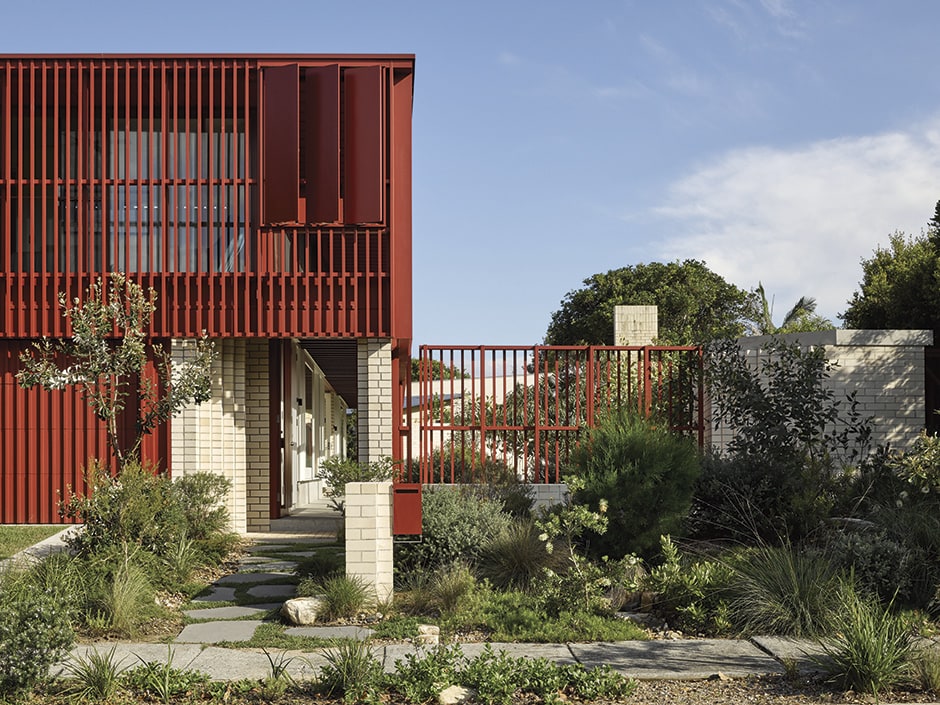 The suburb of Casuarina on the Tweed Coast is part of a regional open-space network dedicated to public use and the preservation of the coastal environment. A 20-year dune-management plan that included the removal of the pest bitou bush (Chrysanthemoides monilifera) and replanting of the coast banksia (Banksia integrifolia) has provided a renewed habitat for flora and fauna.
It’s this native environment and stunning coastline of pristine beaches that appealed to Andrew and Manzuma. Although the house is set back behind the dunes, the ocean is only a few metres away, and this motivated them to design and establish their own native garden (with landscape designers Prandium Studio) that would connect with the broader environment.
Initially, they’d considered a single- storey dwelling that would fill the 700m2 block. Then they recognised the benefit of stacking the home into two storeys on half the land, which would not only allow them to capture the prevailing breeze and increase their solar access, but would give them room for a larger outdoor space and garden.
Andrew says the garden is integral to family life. “Meals are often enjoyed outside and I can see the odd moonlight garden cinema event in our future. For our four-year-old, it’s a place for exploring and playing, picking blueberries, kicking a ball or hounding Mum or Dad to chase him.”

Andrew’s favourite place in the garden is the bench seat directly across from the sandpit. It’s integrated into the garden planting, where “a dwarf eucalyptus is fast becoming a sculptural feature and a source of welcome shade for when our son is immersed in play”.
The process has been incredibly rewarding for Andrew, whose interest in design and passion for horticulture has led him to pursue a new career in garden design. He reflects that “while I’ve many things to be grateful for and that give me enjoyment, I don’t think it’s an overstatement to say that this project is a source of bliss. There’s great therapeutic value when one can immerse oneself in a pursuit of interest. I’ve been lucky to have had the time to indulge, whether edifying myself in all the botanical options, or conceptualising the plan for aesthetics, occupation, light and shade, privacy and engagement.”
He knows every plant in this still-establishing wild garden because he’s tended each of them and supported their growth through trial and error. The rewards he lists have come through watching his garden grow, evolve and being enjoyed by his family, along with the dividend from the physical work of a garden: “No need for a gym membership!”

There’s a clarity of purpose to this house and garden that stretches beyond the family’s needs and recognises that their private space contributes to a broader environment and community. The white-brick podium doubles as a seat at the base of the front fence, permitting a visual and physical connection to the street, and is “a gesture towards connection rather than bunkering and fortressing,” says Andrew. “We’ve occupied this space many times — often simply to monitor our son’s pushbike antics on the driveway and street, which then leads to a passing neighbour joining us for a chat.” 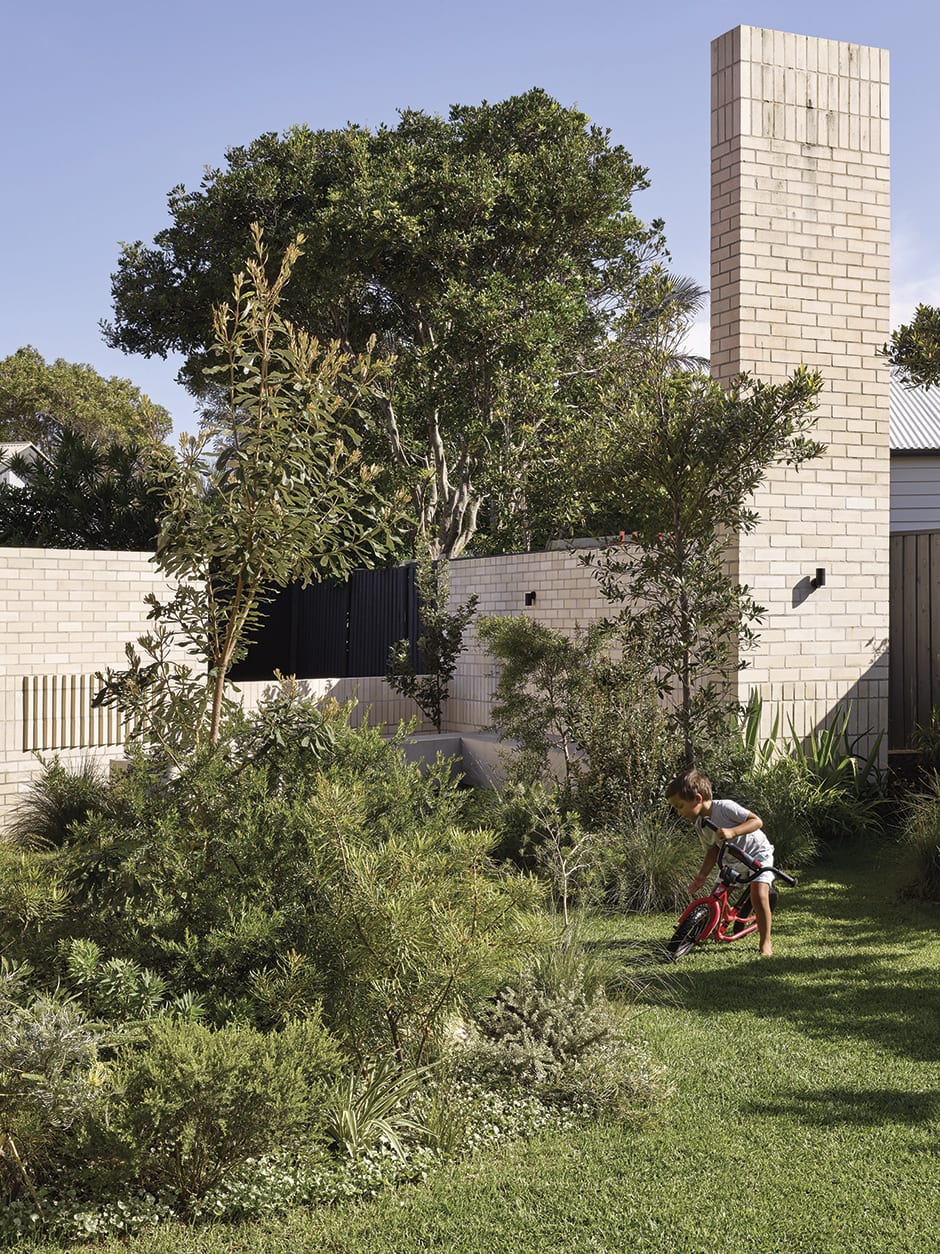 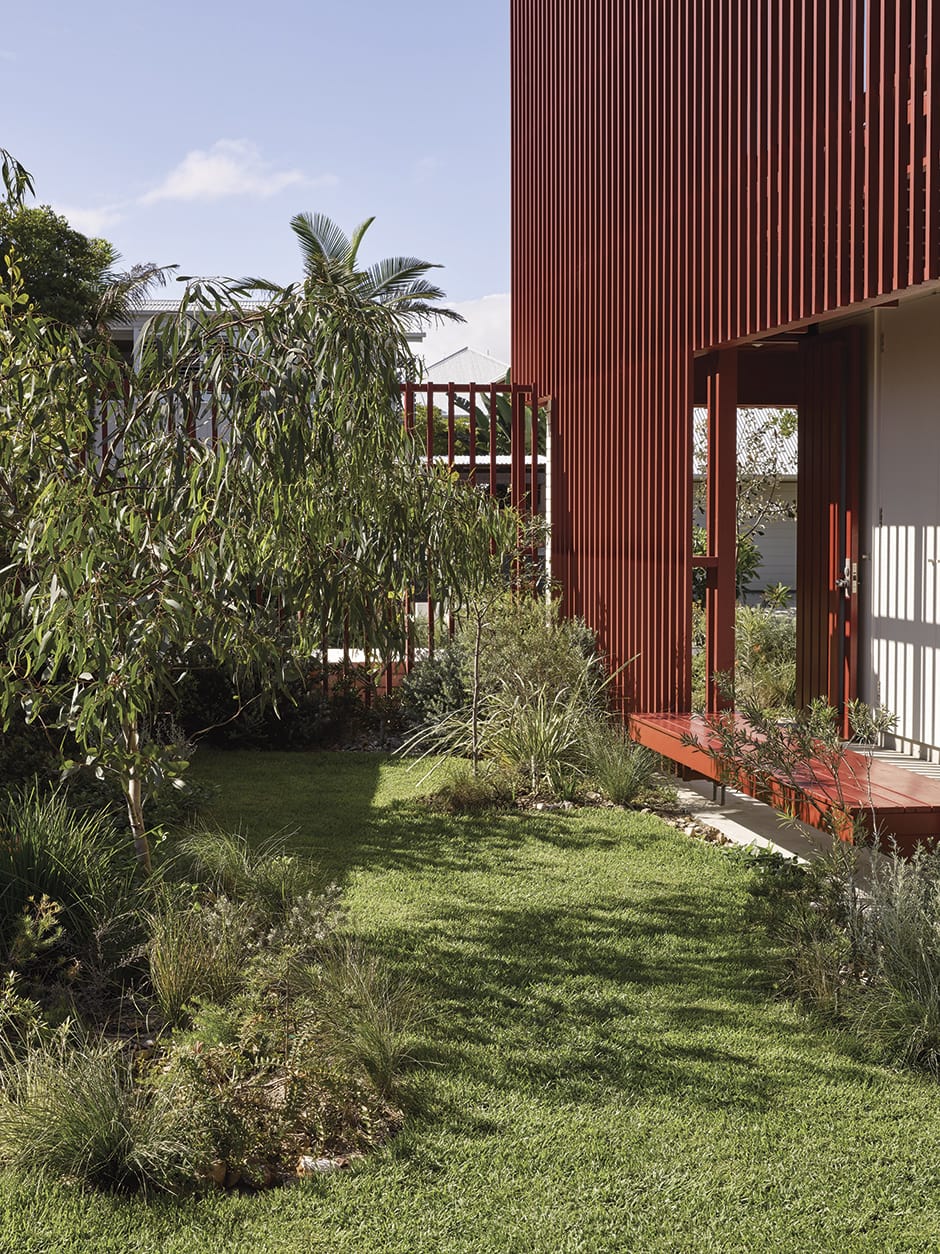 The seamless connection between the house and garden is reinforced by the deep eaves and central spine of the verandah. The home’s large sliding windows roll back, giving a strong sense of being part of what’s happening in the garden. Andrew says that “the sounds, aromas and drama of a good light and sound show” are typical of the location.
The outdoor room between the living and dining areas is neither house nor garden, but inextricably part of both, affording views of the sky and the adjacent garden. The garden walls double as seating and concealed fencing, preserving uninterrupted views of the pool while being a vertical barrier for small children.
Andrew describes how inviting these walls are to sit on in the late afternoon. “To sit there quietly, even if just for a few minutes, is therapeutic. Sometimes my wife and I have taken a seat here to enjoy being in the moment with our son, each other, the house and its garden.”
From a sandy plot of land, Andrew has nurtured a thriving haven. It’s been imagined with extraordinary foresight, care for the environment and generosity towards the community where the couple have chosen to grow their family and a garden. 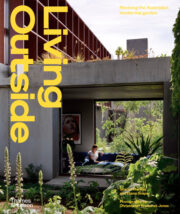 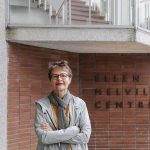 NextAsili’s new collection is good and does good 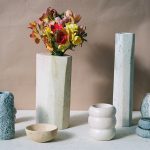