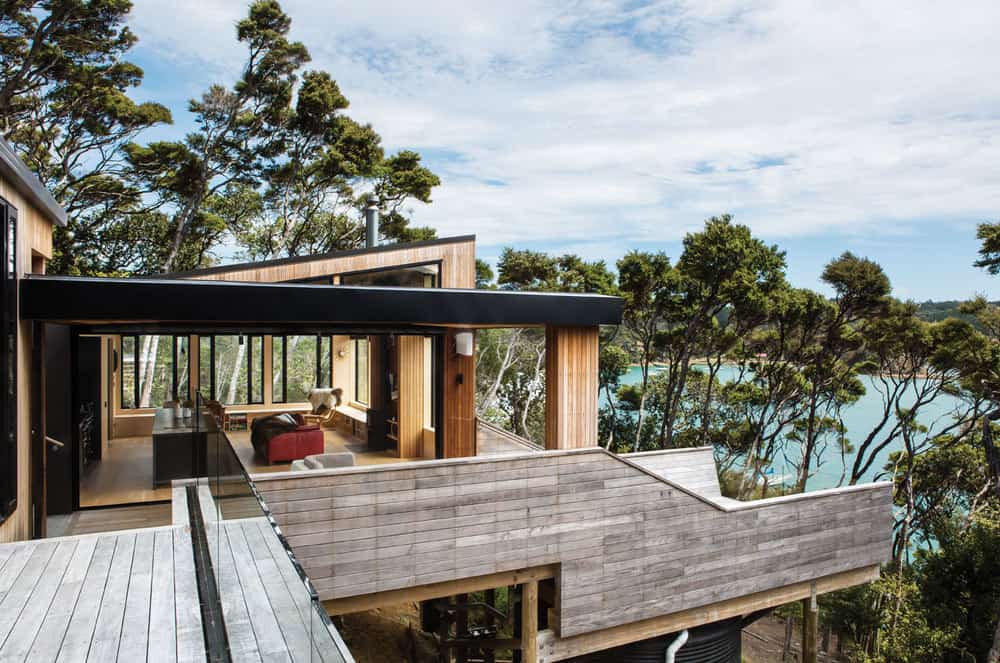 Swapping weekends in the city for ones spent on an isolated island comes with sacrifices – as well as many rewards.

There was a good reason behind Lorenzo Canal telling his two pre-teen boys “no more Saturday sport”: freedom. It wasn’t that Lorenzo and his wife Melissa couldn’t bear to stand around a frigid field every weekend, but because they wanted to concentrate family time at their second home on Kawau Island.

Lorenzo and his twin brother, Edoardo, bought seven hectares of land on Kawau Island 15 years ago. They imported sand to create a private beach, added a wharf and installed a cable car for easy access. Then they subdivided the property into 10 sites and named it Hideaway Cove.

The section Lorenzo kept for himself faces west on a 30-degree slope that bows towards the Kawau Boating Club, a veritable mecca for locals. An engineer by trade, he took on the role of project manager after asking Tim Dorrington of Dorrington Atcheson Architects to design him something bach-like. 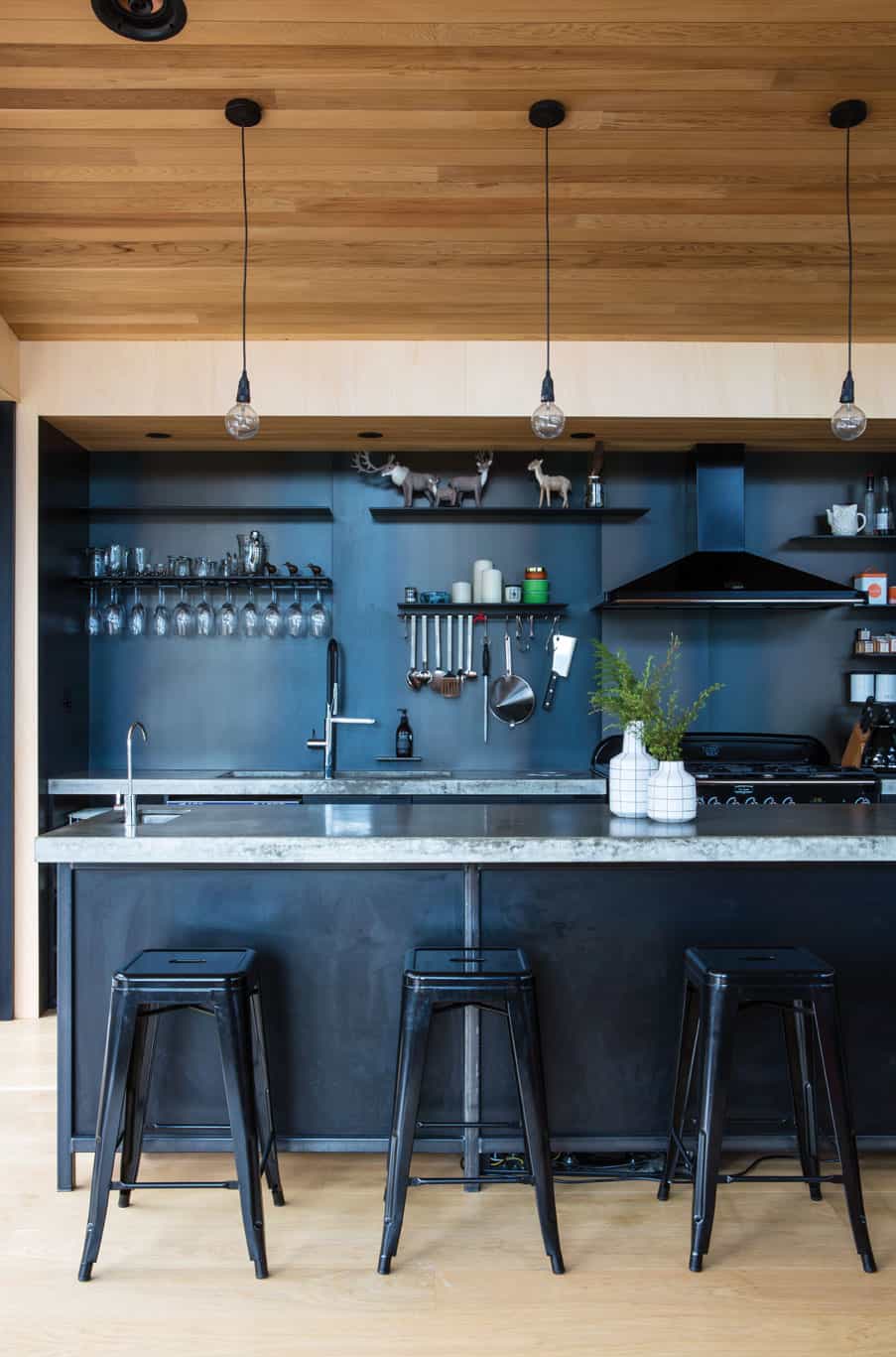 Tim came up with a plan comprising of a series of small buildings, like a campsite. A duo of pavilions – one for living, the other for sleeping – are loosely connected by two slender spines housing a utility and storage ‘shed’ and a container for a galley kitchen, pantry and wood store. A covered courtyard sits between the forms; a visual connection enhanced by a horizontal line of black flashing thatwraps the buildings as a package.

On approach they look like sophisticated cabins with crisp lines, mono-pitched roofs and a clean materiality of timber and black aluminum. Yet, tucked into a kanuka forest on a hillside, they are barely visible from the water.

But, while the end result looks effortless, getting there was not. In a location where, logistically, it makes sense to erect a pole house, Lorenzo had his heart set on concrete foundations. “We made concrete on site in a diesel-powered mixer,” he says. 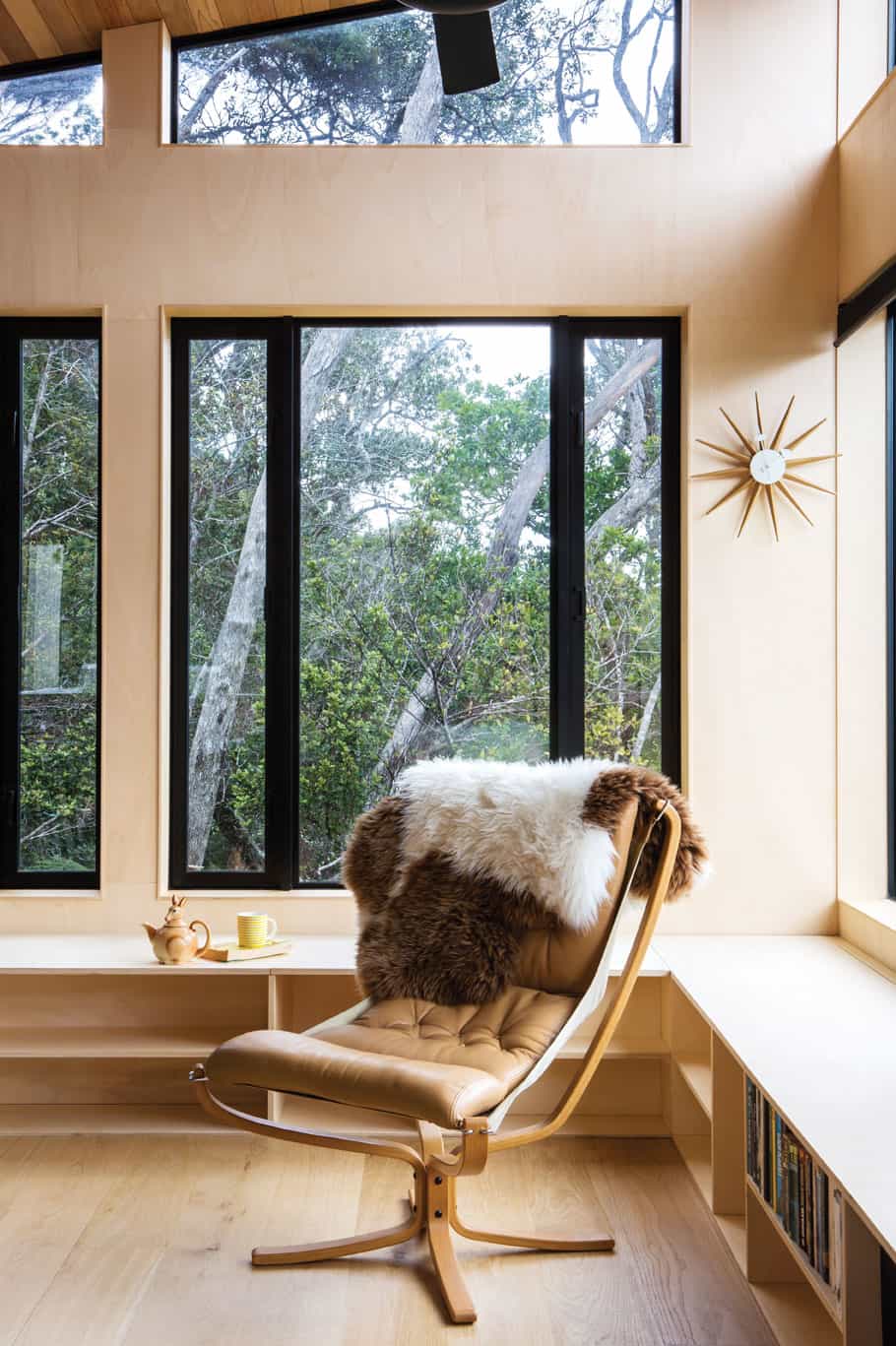 The detailing was similarly labour-intensive. “Both of us were committed to being uncompromising with the detail,” says Tim.

Starting with the cladding. Narrow cedar boards make for an elegant exterior but are demanding to construct. “You can buy weatherboards routed with grooves to appear slimmer,” says Tim, “but the colour variation wouldn’t have looked natural. Hand-making them was the
right thing to do.”

Internally, there are no architraves or skirtings – and not a sheet of plasterboard to be found. The floors are American oak, the walls are lined with Italian poplar plywood and the tongue-and groove ceiling emulates the shiplap exterior cladding. This is a composition where transparency and solidity are in optimal balance. Sliding doors disappear seamlessly and carefully placed windows frame the sea and trees. 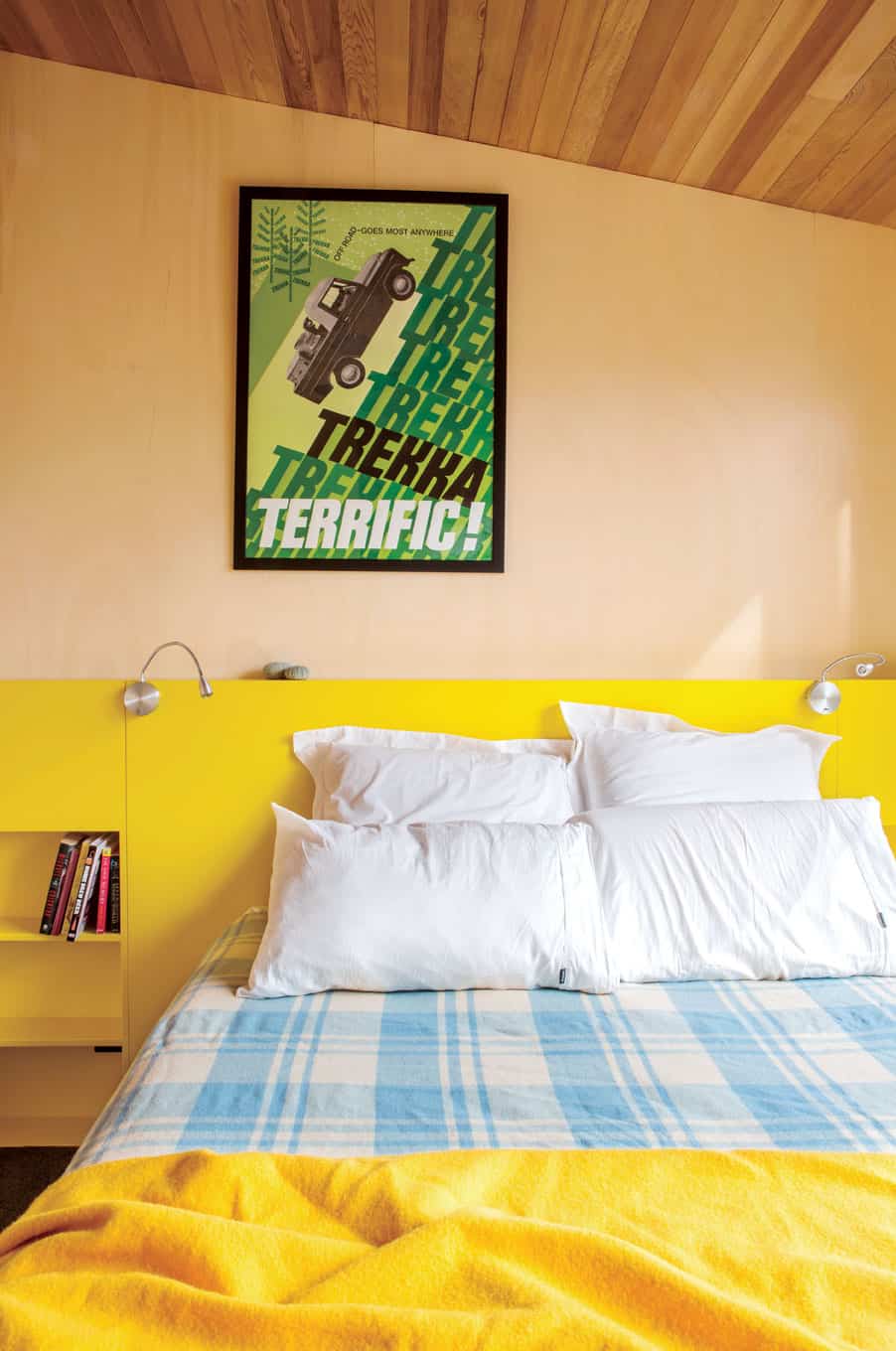 Although the footprint is small – the two main structures are each 6×8 metres – this is big-picture living, with no room for pretentiousness. Shared facilities in the bathroom operate like an ablution block to ensure a quick turnaround of family and guests. Walls divide the shower from the washbasins and a changing area, with a separate loo.

There is one extravagance, though: an extra WC on the southernmost end of one spine of the home features a stable door which can be thrown open to the view for leisurely loo-stops. “It’s our version of a long-drop and we’ve added some shelving to create a ‘library’,” says Lorenzo.

Simplicity is key here. The family pared back the way they live in the city, in order to be able to afford the good life on Kawau. “We play more games, fish, dive and socialise,” says Lorenzo. “If I fancy some scallops, I head off in the inflatable dive boat and they’ll be on the barbecue within an hour.” 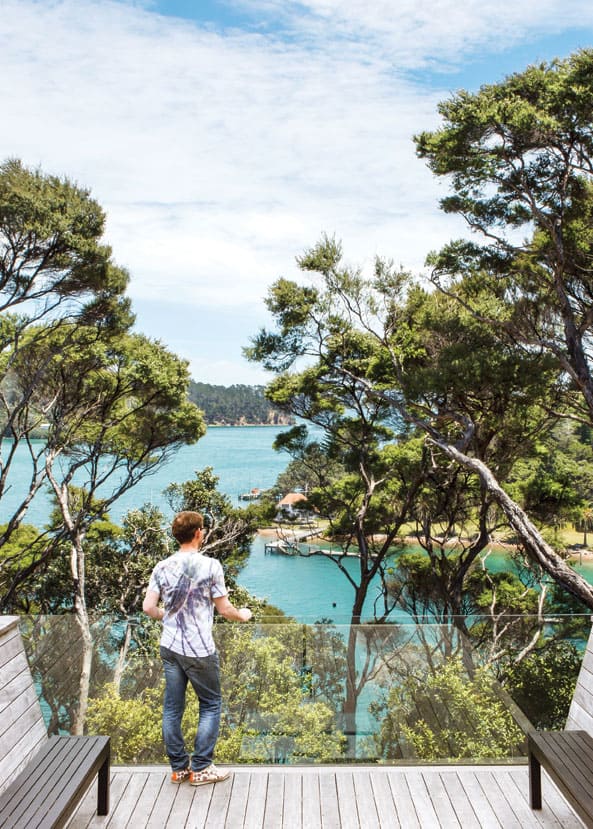 Time to just be, rather than do, is precious too. When a westerly is blowing, a concrete patio with an outdoor fireplace is a sheltered place to hang out. The cantilevered platform with its glass end that hovers in the trees facing the bay is the ideal spot to plop into a beanbag, lean back on the sloping sides of the deck and watch the boating brigade come and go.

The jetty where the boys, Louis (12) and Jules (10), enjoy catching snapper is another favourite spot.

“In Auckland, we spent our weekends driving around sports fields and somehow being busy. Here, it’s so wild and anything goes. There are weka and wallabies and, from town, I can be on the island in 90 minutes and yet it feels so remote,” Lorenzo says.

When they aren’t catching fish or diving for scallops, the boys are encouraged to be hands-on in the kitchen. They’re happier, of course, to hop on their paddleboards and make their way over to the boat club for an ice cream. And they still play for their school teams – just not on a Saturday. 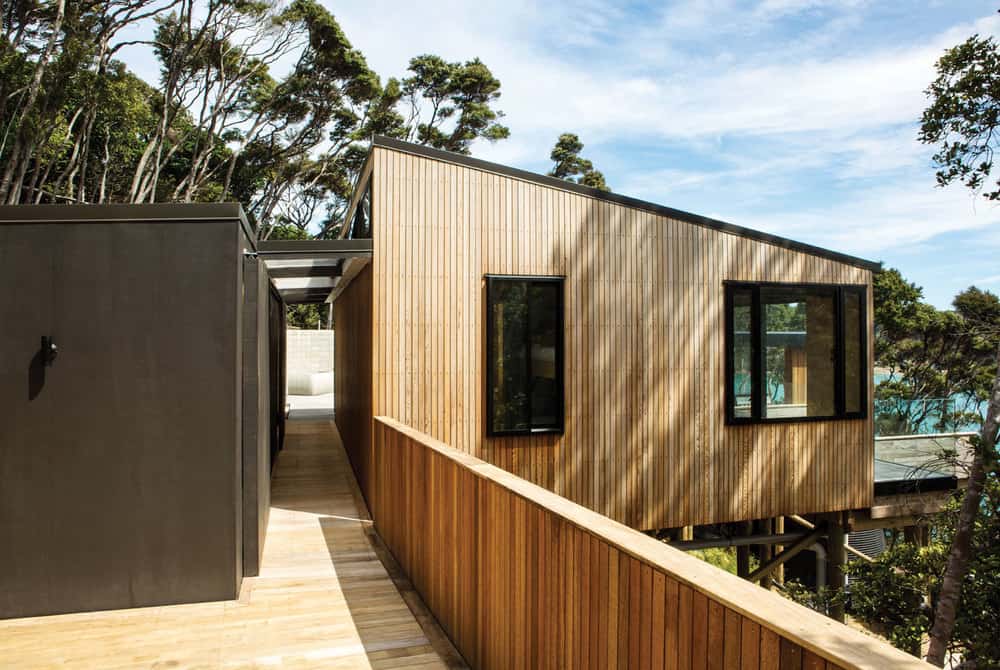 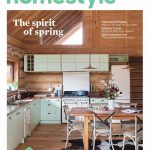 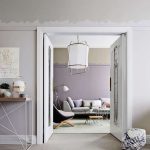