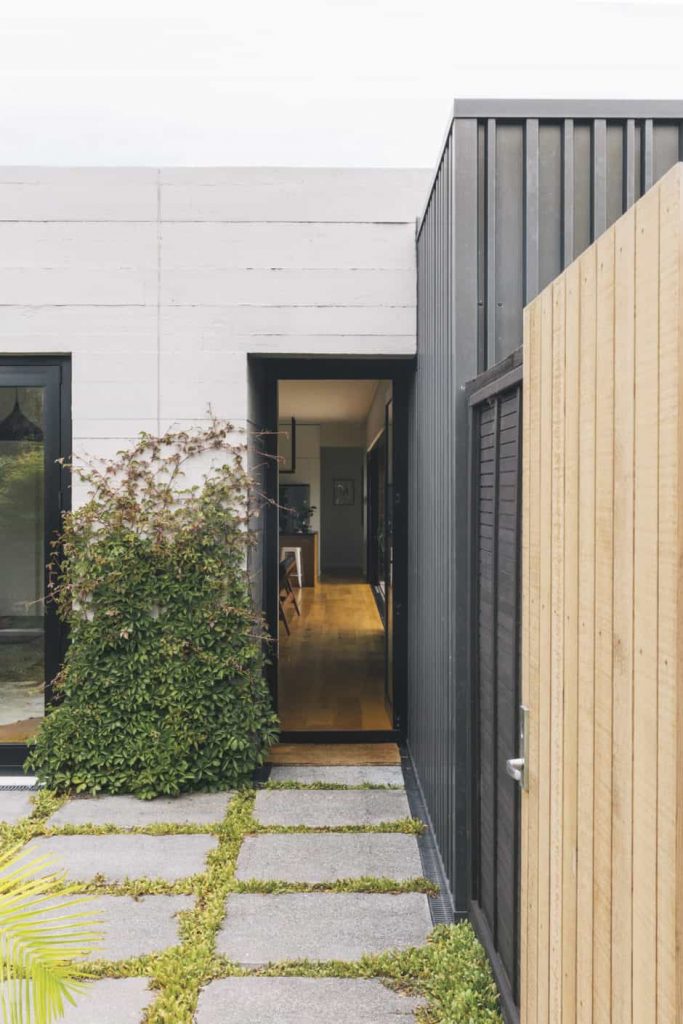 You can expect to find all kinds of things in central Auckland – but a garden-centric home is not chief among them.

The high concrete wall is not unattractive, but as I walk down this quiet Mount Albert street on a quiet Thursday afternoon, I don’t give it a second glance. I’m looking for a garden. Well, a house to be exact – but one that I’m told centres around a pretty special patch of greenery.

But just as I’m charging past the unassuming enclosure, a wooden door opens from within it, exposing a small paved courtyard beyond. “Hi, I’m Nye – come in,” says the gate opener. Unless I’ve encountered a very friendly stranger with excess time on his hands, this must be the house. But where is that garden?

The effect is so special, you get the feeling it must be the result of a long dreamt-of plan. But no. It is actually the creative solution to the pressing problem of having nowhere to live.

Inside. As in, through said courtyard, into the house and there, through wall-to-wall triple sliders lies an inward-facing, custom-designed patch of sub-tropical plantings, sunshine and promises of true indoor-outdoor living. Forming a ceiling-less extra room flowing on from the living area, this secret garden also serves to make the small house feel quite expansive. 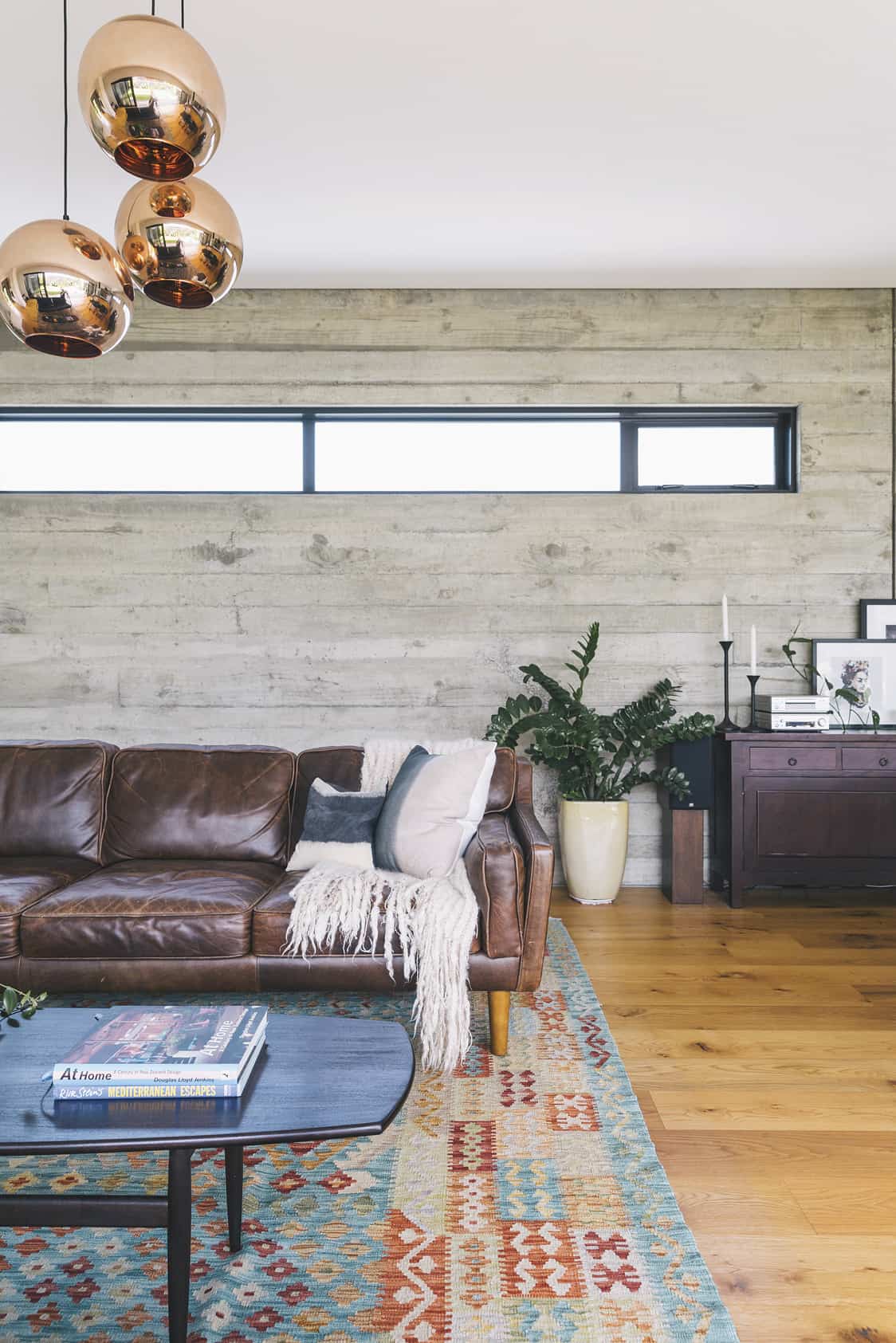 The effect is so special, you get the feeling it must be the result of a long dreamt-of plan. But no. It is actually the creative solution to the pressing problem of having nowhere to live.

Four years ago Nye and Claire O’Shannessy had just sold their house and were looking for a new do-up project that they could move into with their two girls, Isla (7) and Neve (5). But after six months of sub-letting and living with Claire’s parents, that search for a place to renovate turned into a hunt for “just about anything”. As Claire explains: “you’re not too picky when you’re essentially homeless”. 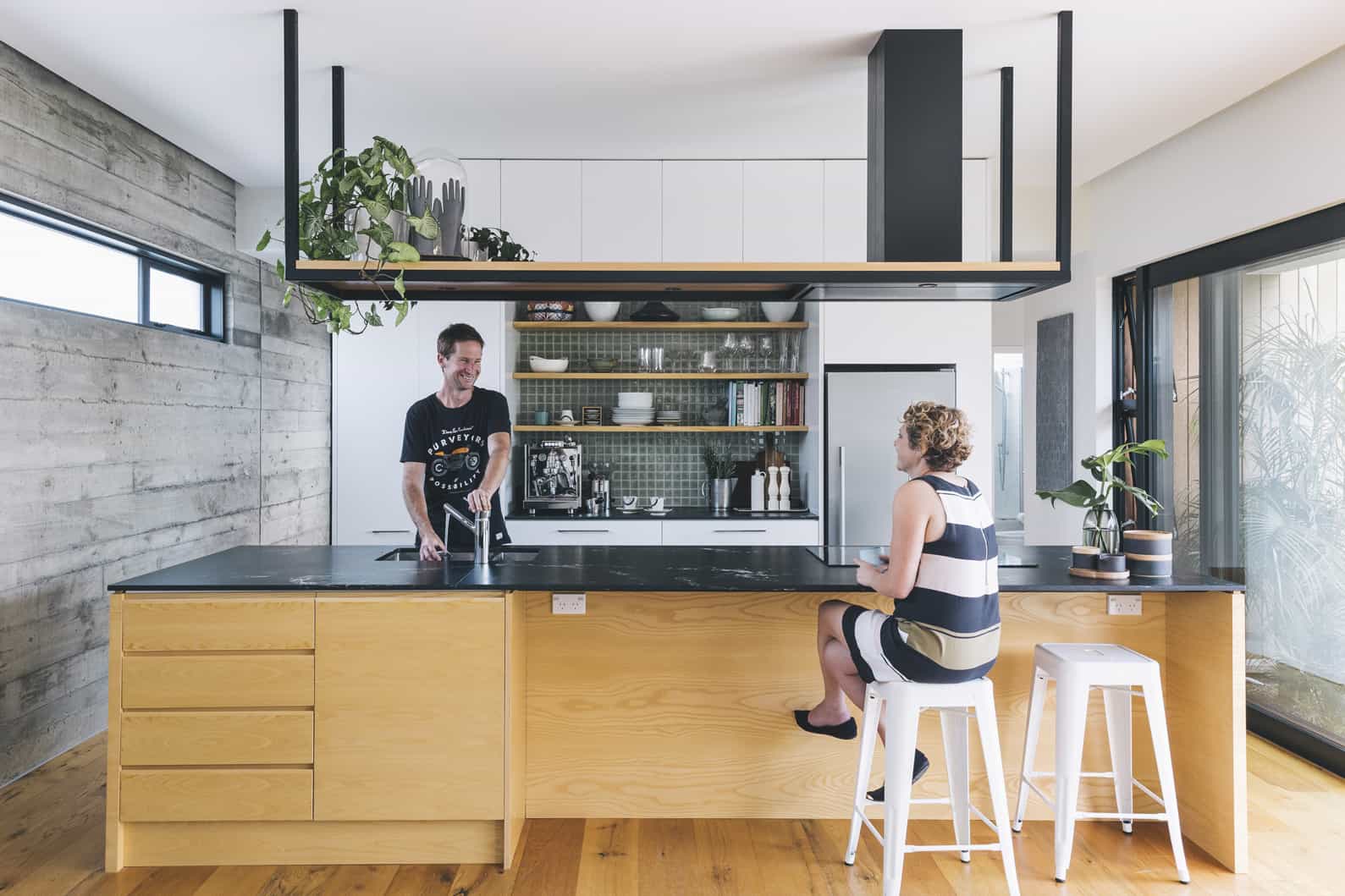 So it was that they ended up sub-dividing a narrow strip of land; moving the existing bungalow to the back of the section and living in it while they built a new house to move into at the front.

This change of plans was facilitated greatly by Nye being a builder. It also didn’t hurt that he had the perfect architect in mind, one that he’d already worked with on a number of projects in the past. “Jan Bernau is just really good at making things work,” says Nye. “When you’re working with such a narrow section you need the help of someone who can fit everything into the tight envelope while still making it look and feel comfortable.” 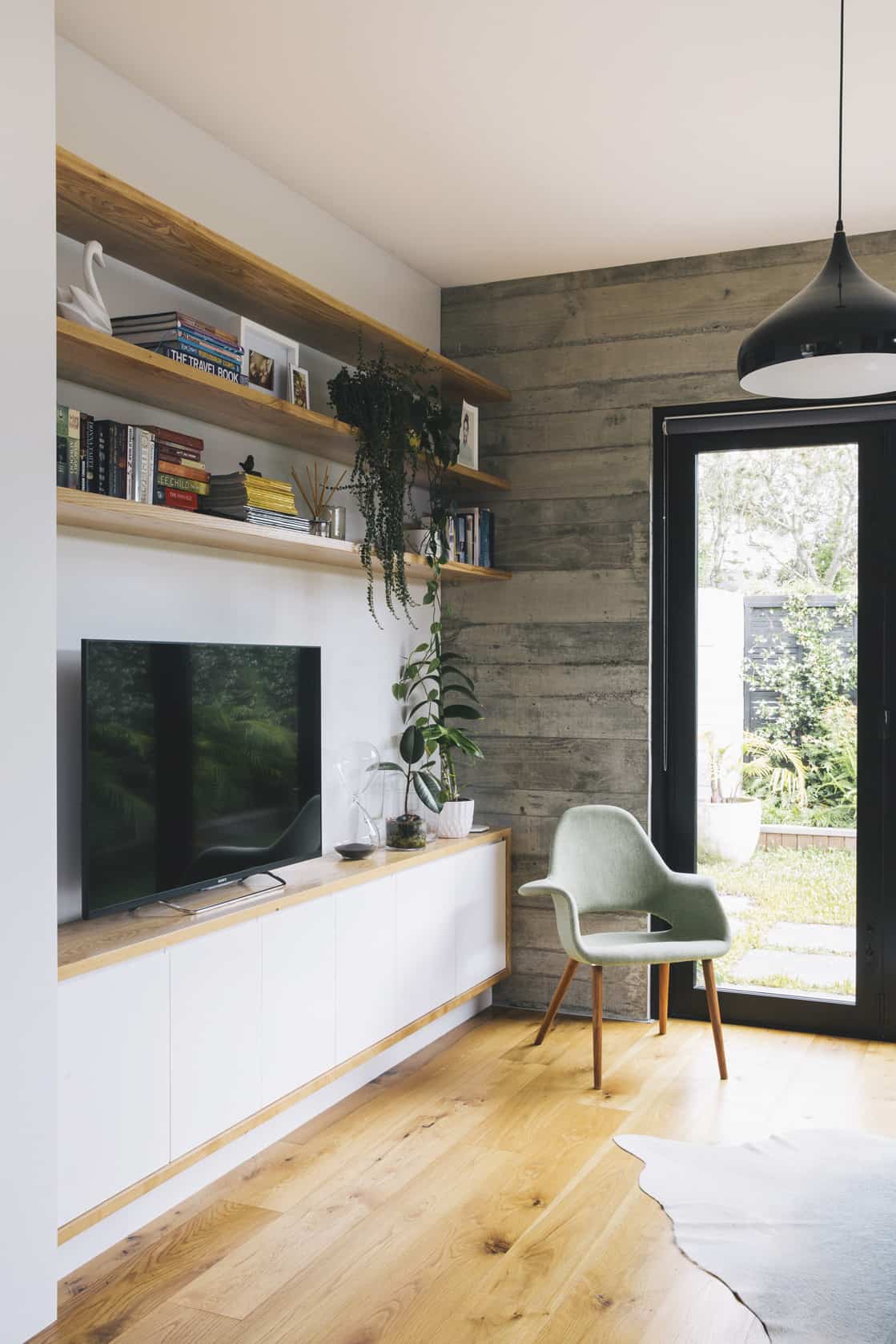 ‘Comfortable’  is the operative word ’round here, with two large living spaces – indoor and out – plus a snug TV room all forming the heart of the house, and ‘take a seat anywhere’ furnishings acting as fitting appendages.

“Once you’re inside the gate you’d never know you’re in central Auckland. It feels like we’re on holiday every day.”

“We realised early on that to get a three-bedroom house on this section the place was going to end up looking quite imposing from the outside,” says Nye. “So we set out to create this great contrast of having everything feel very warm and inviting once you walk in.”

While most of the living is done in the open-plan space, the bedrooms are also comfortable – largely due to slotting one of them, the master, into its own half-floor upstairs. 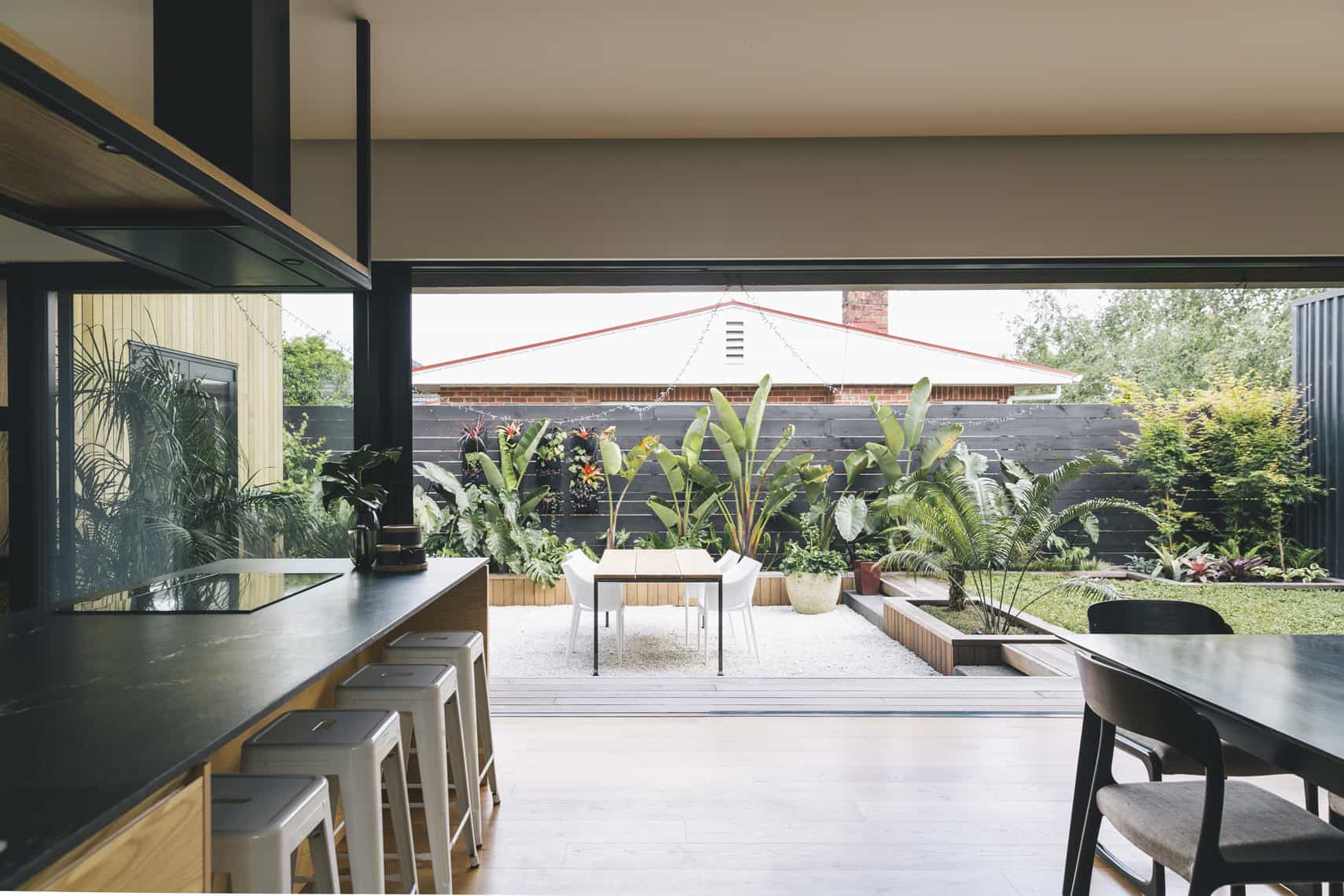 With a walk-in wardrobe, ensuite and even its own small deck, this space is a cosy retreat – but one Claire and Nye don’t spend much time in. “Some people have asked why we didn’t extend the upstairs all the way across to the front of the house,” Claire says. “But that would’ve involved losing the high stud downstairs,and we didn’t want to compromise on that since we knew that’s where we’d end up spending all of our time.” 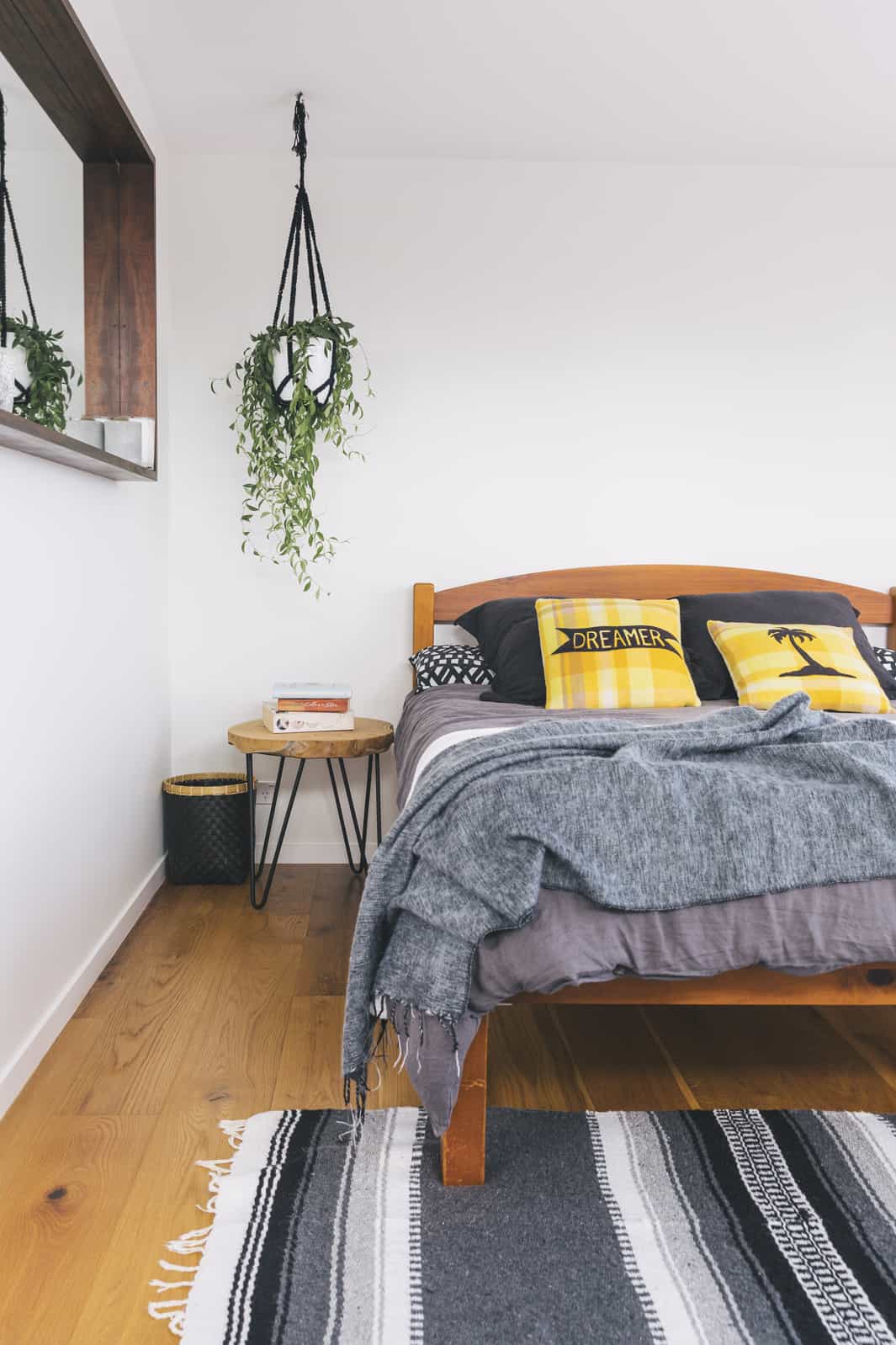 Well, there and in that garden. The family use the outdoor area, designed by Xanthe White, for everything from garden parties to evening meals. “With this sized section we were never going to have the classic Kiwi backyard,” Claire says. “But in many ways what we got is even better. The sun floods the whole area in the evenings and it’s especially lovely at night time.”

There is also an unexpected bonus: saving on holidays. “Once you’re inside the gate you’d never know you’re in central Auckland,” Claire says. “It feels like we’re on holiday every day.” 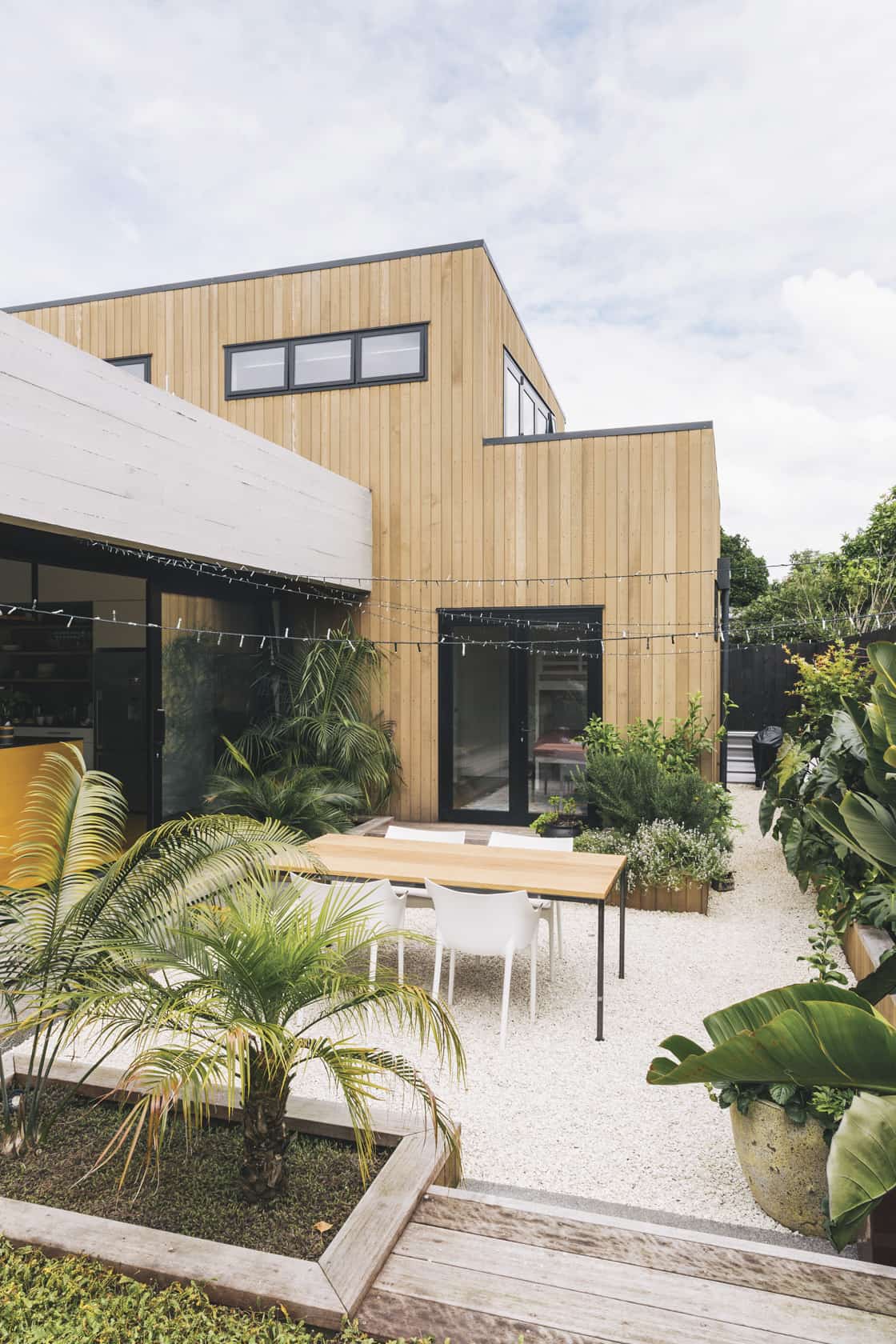 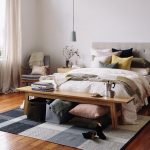 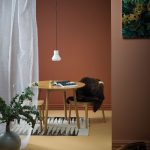