In the studio with Hamilton artist Rachel Hope Peary 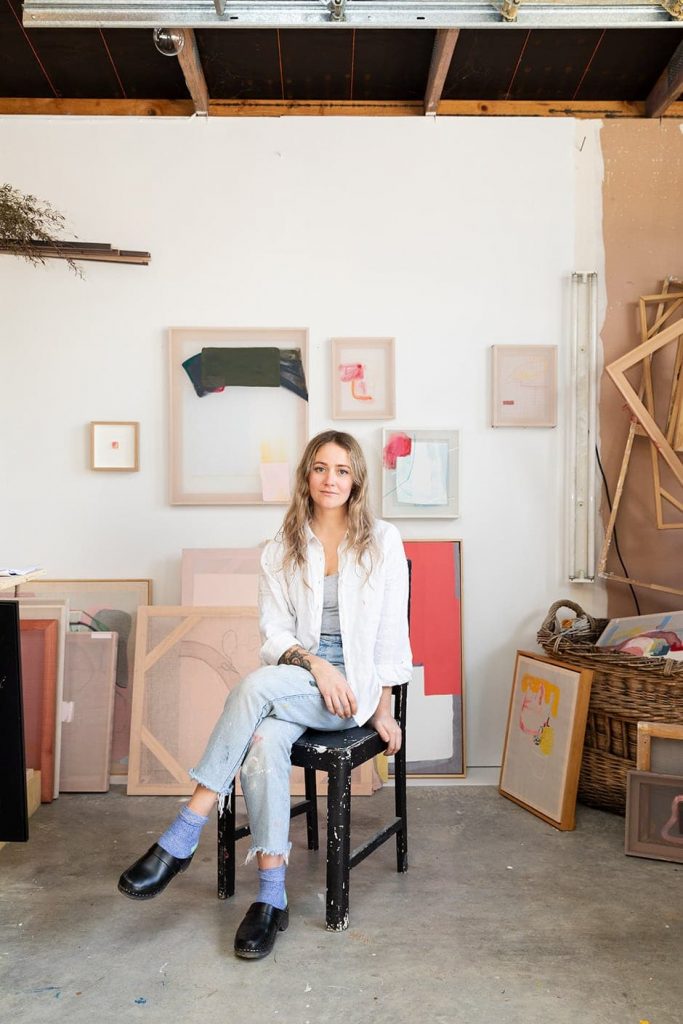 Her thought-provoking pieces are grounded in feminist theory.

Abstract-minimalist artist Rachel Hope Peary says she’s always been an expressive person, drawn to playing with textures and materials. The Hamiltonian was homeschooled from go to whoa, which gave her all kinds of opportunities to be creative and encouraged her natural inquisitiveness. Heading to art school saw her dive into that curiosity in a whole new way, and from there her practice developed.

Rachel, how would you describe your aesthetic? It’s always evolving, but for now I consider it to be contemporary abstract minimalism. I create wall-based works that most people would consider to be paintings. They actively lean towards the feminine and this has been a consistent factor that reveals itself through my pink palette, in the fine textiles I employ, in the lightness in the majority of my work, and in the sense of lyricism and movement that’s visually associated with the feminine.
I’m also a yoga teacher, and for me, successful works hold balance and harmony. These attributes are achieved with a variety of marks that can be fluid and gestural or dense and unforgiving. 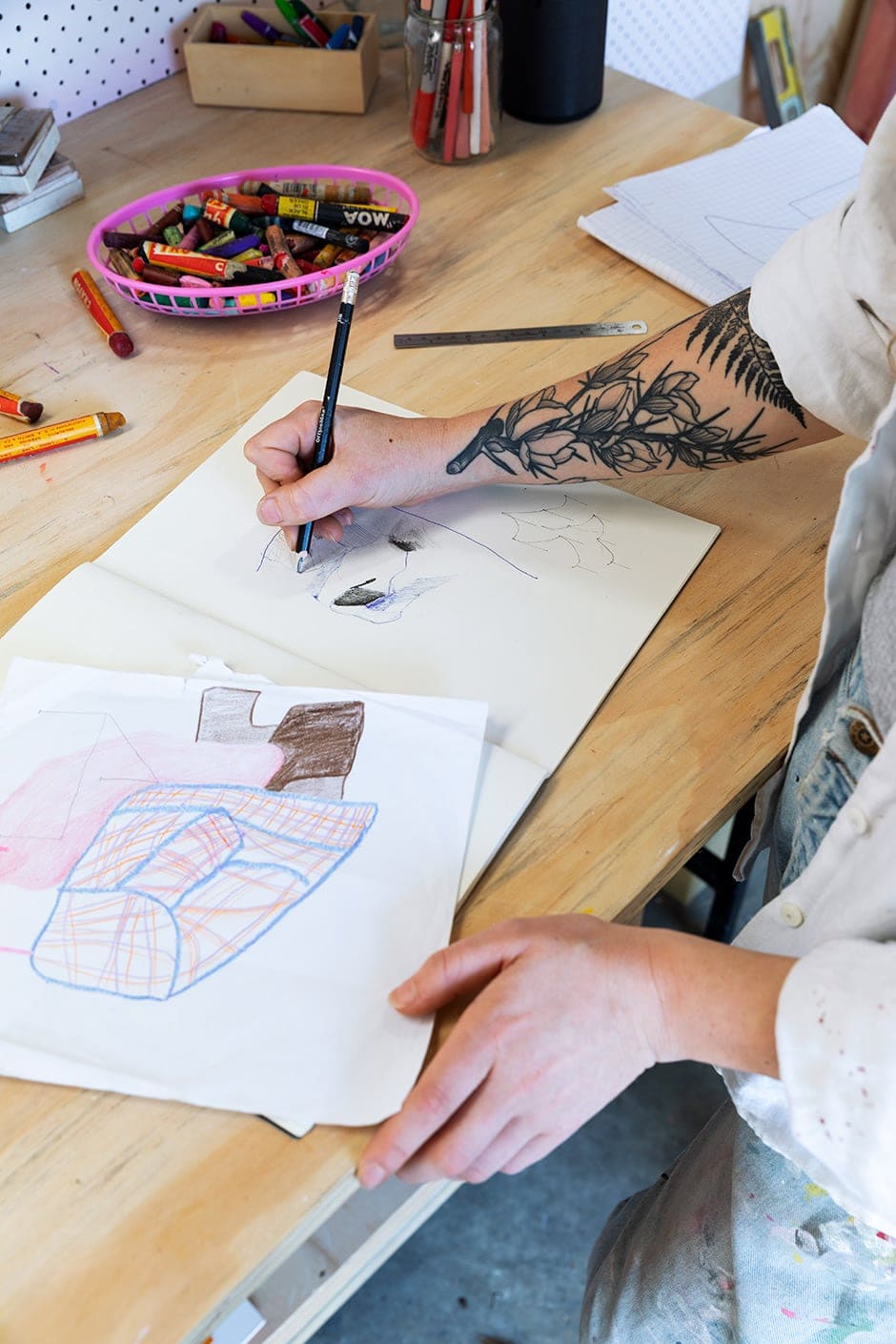 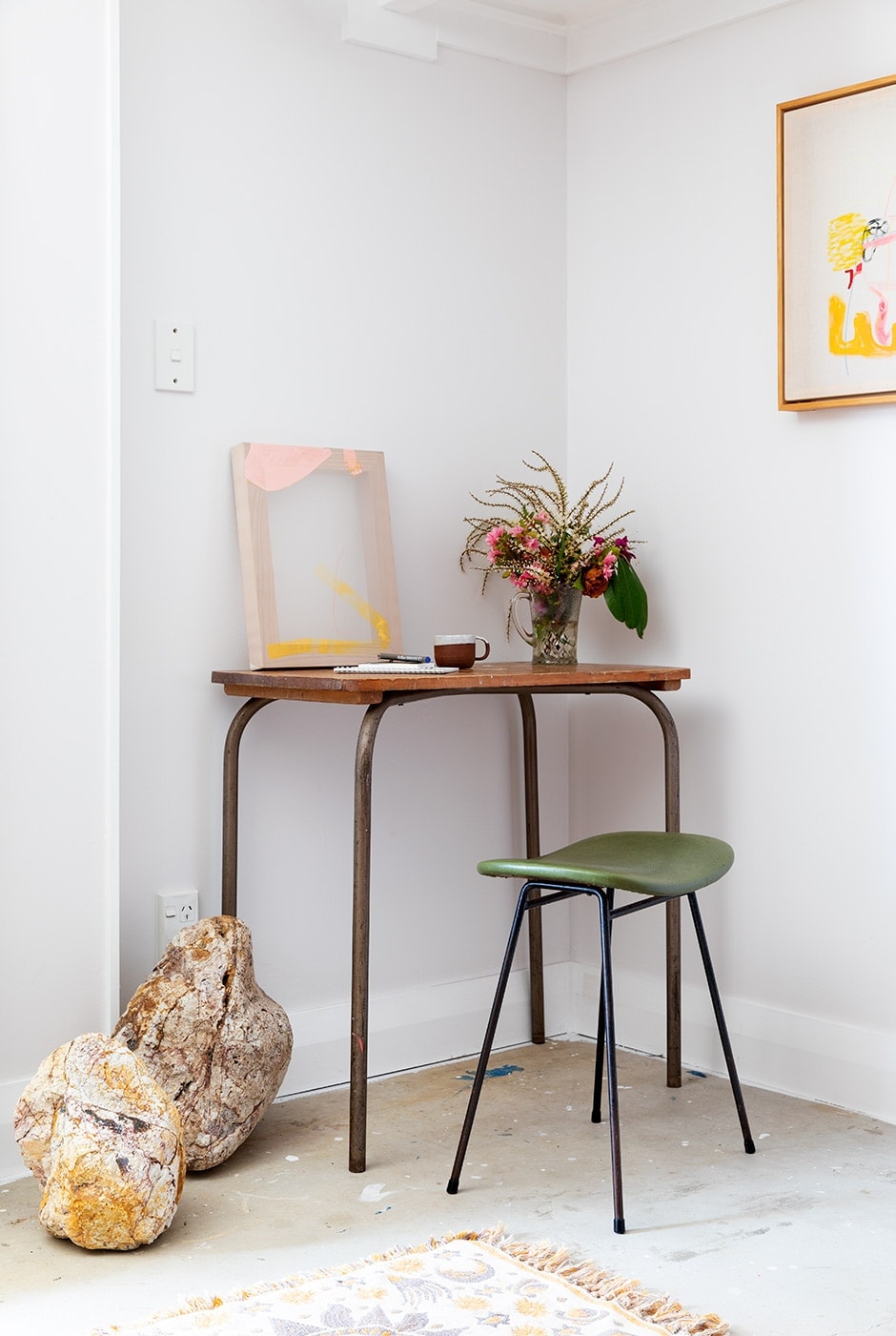 What inspires your work? I usually get my best ideas when I’m halfway through executing a different one, so I have to be very diligent about writing down my thoughts and finishing a concept before I start the next. Early on, my inspiration came from looking at other artists’ work, visiting galleries and bouncing ideas off friends. Now I have a large body of work, so I look back on that to help generate inspiration. Returning to ideas after a few years often gives me space to explore them in a different way.

We love how you experiment with transparency — is this something you’ve always been interested in? It was something I noticed in my work early on at art school. I’d routinely reflect on each assignment and found that no matter what I was playing with, transparency was present. Once I realised this, I began to work more consciously with it, and now it’s always evident my practice.

You’re almost working with the canvas as a 3D form, rather than a flat surface… When I began playing with transparency more consciously, I began to see the frame in a whole new light. I grew interested in breaking down the hierarchy of materials, seeing the frame not only as structurally integral but also aesthetically pleasing. Naturally, with this deconstruction of what a ‘painting’ is, what’s seen as flat becomes 3D. 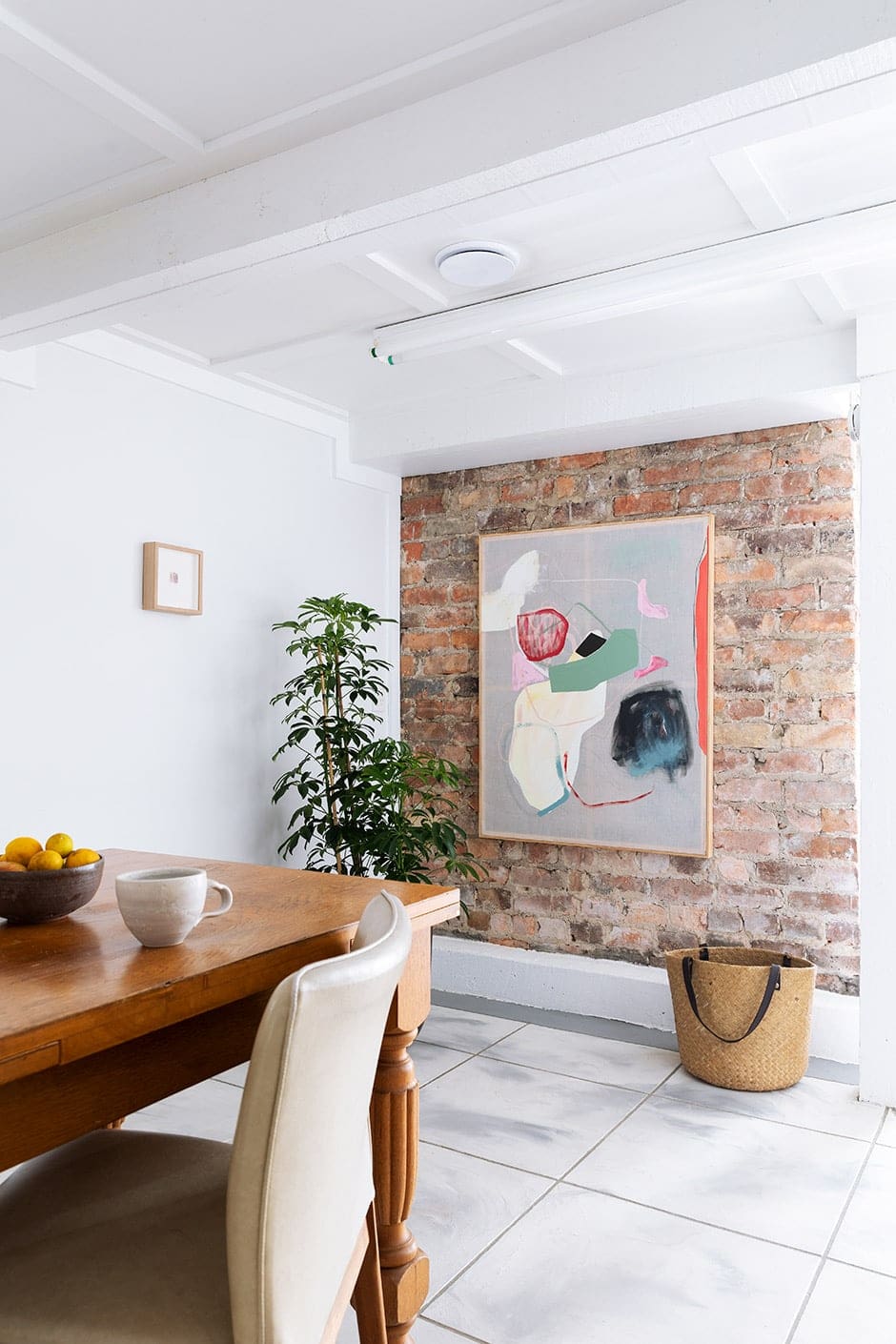 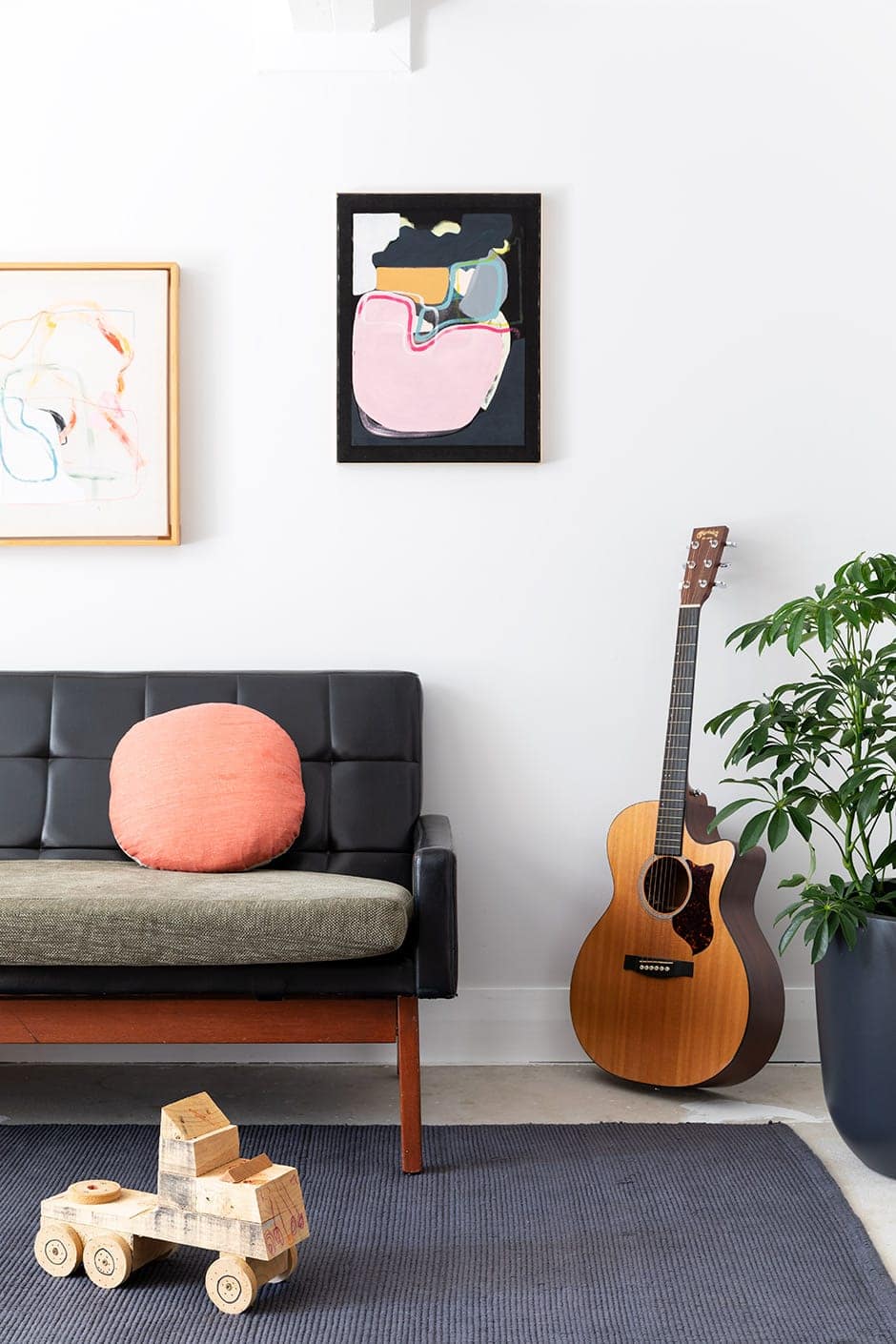 What informs your colour palettes? It’s funny because I don’t consider myself an overtly feminine woman, yet I’m always using palettes driven by pinks, soft reds and fleshy tones. I’m not sure what informs this — I just know I find those tones pleasing. I do like to reference the colour relationships in my garden — the harsh pinks with greens — then I usually soften them
with fleshy tones. 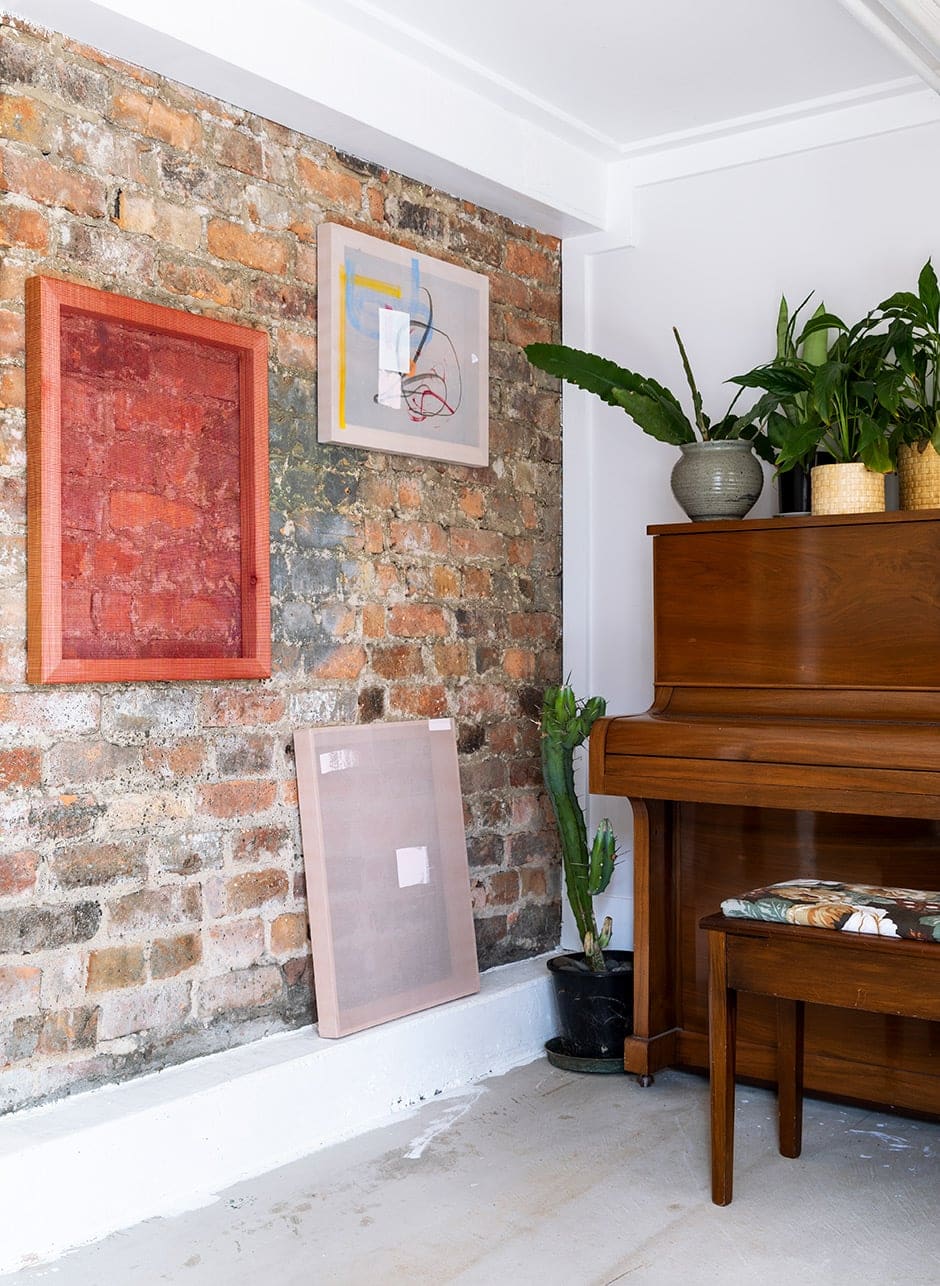 What gets you in the mood to paint? Every few months, I find myself deeply in the mood to paint — usually after being out in nature or after a riveting conversation about art with friends.  The rest of the time, I approach it like a discipline and a practice. I treat art the same way I would any other job — on a studio day, I show up in the morning and get stuck in. 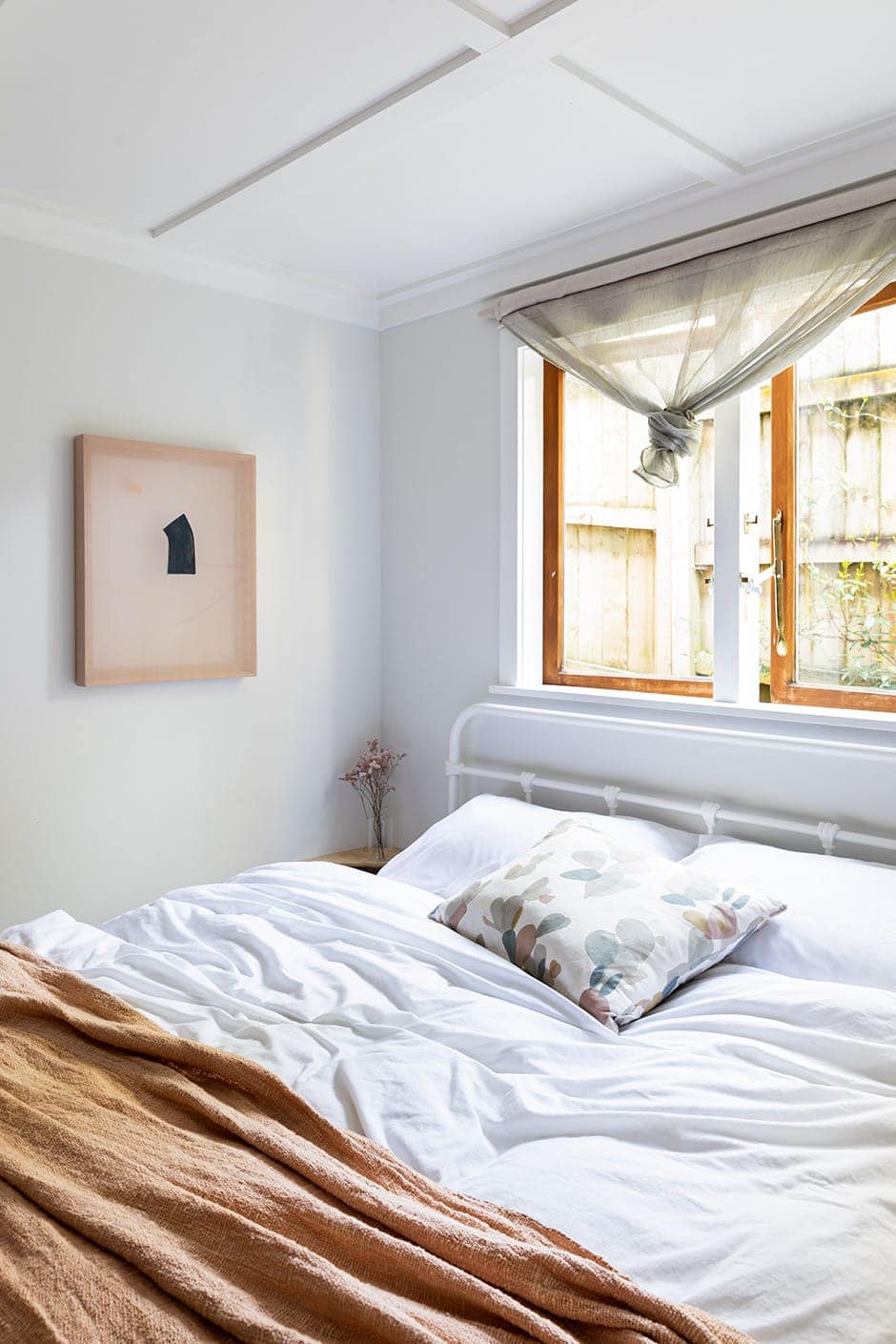 You recently collaborated with Mount Maunganui-based fashion label Nyne — how did that come about? I started talking with Nyne in 2018 about their summer 19/20 range and had the opportunity to do up a print for it, working with photographs of my paintings and digitally drawing shapes and lines to create it. I’m usually in control of the elements in my work, so it was a fun process to simply play with the forms and design, then allow other creatives to respond to that imagery in their own way. It was also cool to see use of transparency, layering and texture present as always in the work, just in a different context. 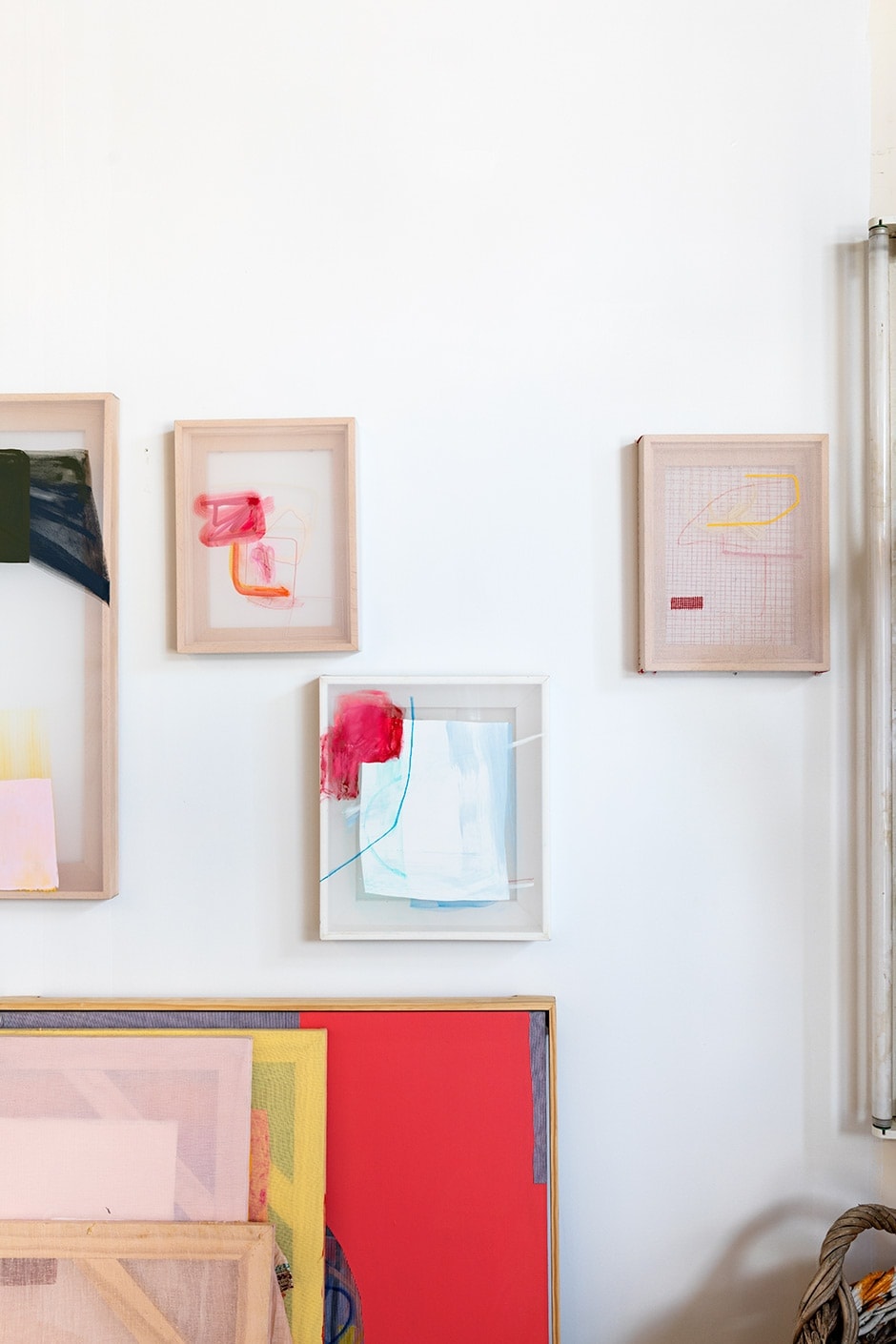 What do you know now that you wish you’d known earlier in your practice? Sometimes things are only as hard as you make them, and things don’t always have to make sense. For my practice and personality, this is crucial for me to remember. When you study art, you’re asked to commentate on things, which would often lead me to get stuck when I couldn’t eloquently articulate my ideas or the reasons behind what I was making. But sometimes choices don’t make sense, or I don’t understand why they work or why I like things — and that’s okay.

What’s on the cards for you this year? It’s my second year as a practising artist, so I’m committed to establishing a consistent studio practice. I’ll be working with my Hamilton manager and gallery, Laree Payne at Weasel, on local projects and exhibitions, including a show in April; showing at Gisborne gallery Paul Nache in July/August; and I also have plans to exhibit in Auckland and Wellington too.
rhpeary.com 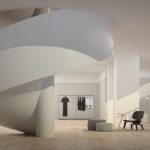 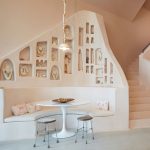