A striking yet homely abode by Thorne Group and Gezellig Interiors 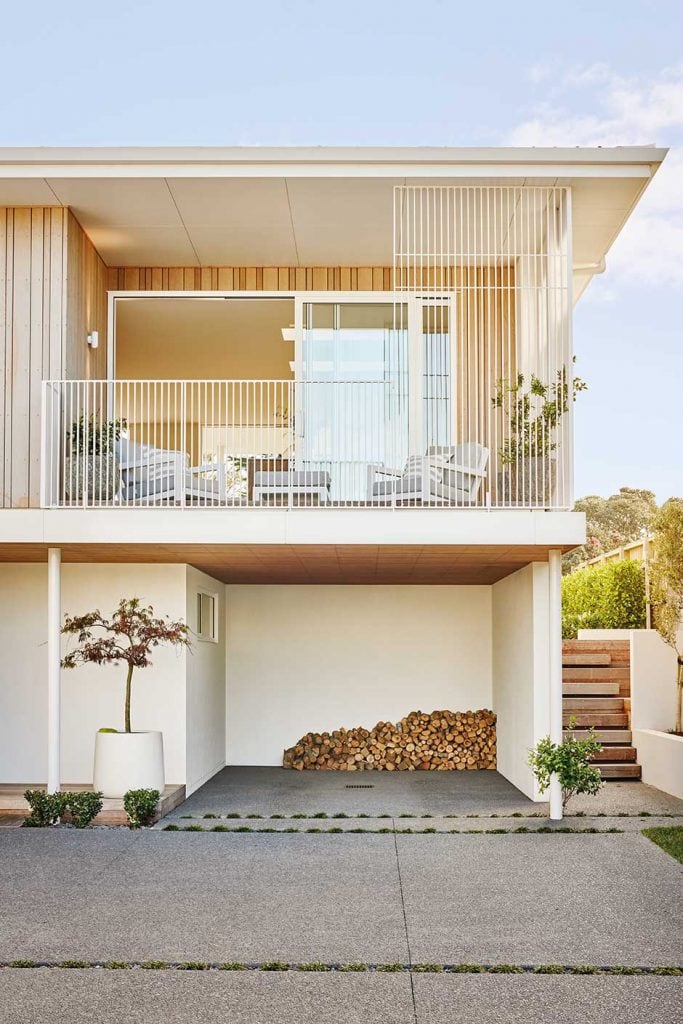 This is the story of a house. In Mount Maunganui, beside a golfcourse, near the beach, it’s a strikingly chic house that appears to place the focus firmly on aesthetics. In actual fact, there’s much more to it than just good looks — here, it’s comfort that’s key. At heart, this is a healing house, where a hardworking family of five has loved and grieved loss, recovered from illness, regrouped and joyfully risen again. This is a special house. 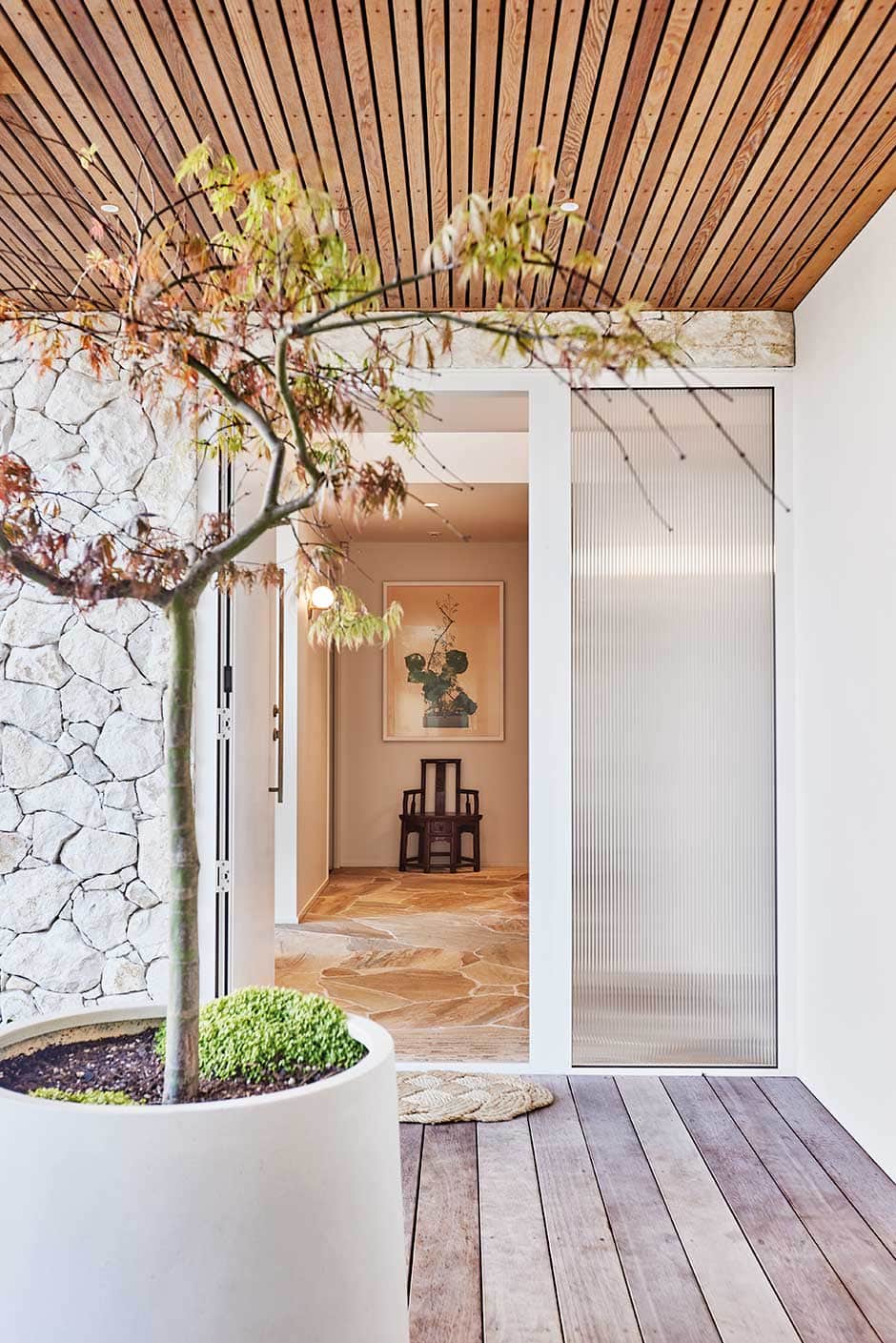 Interior designer Annique Heesen of Gezellig Interiors was one of the professionals charged with the task of realising this happy home. She’d worked with its owners, Thorne Group Architecture and the building team from Thorne Group on a number of previous occasions, and that solid foundation of trust and understanding has made this a house that genuinely speaks to and nurtures those living in it. “The most important thing was creating somewhere they could really feel at home, so it’s designed around giving them both places to be together and spaces for solitude, using lots of rejuvenating, natural materials,” she says. 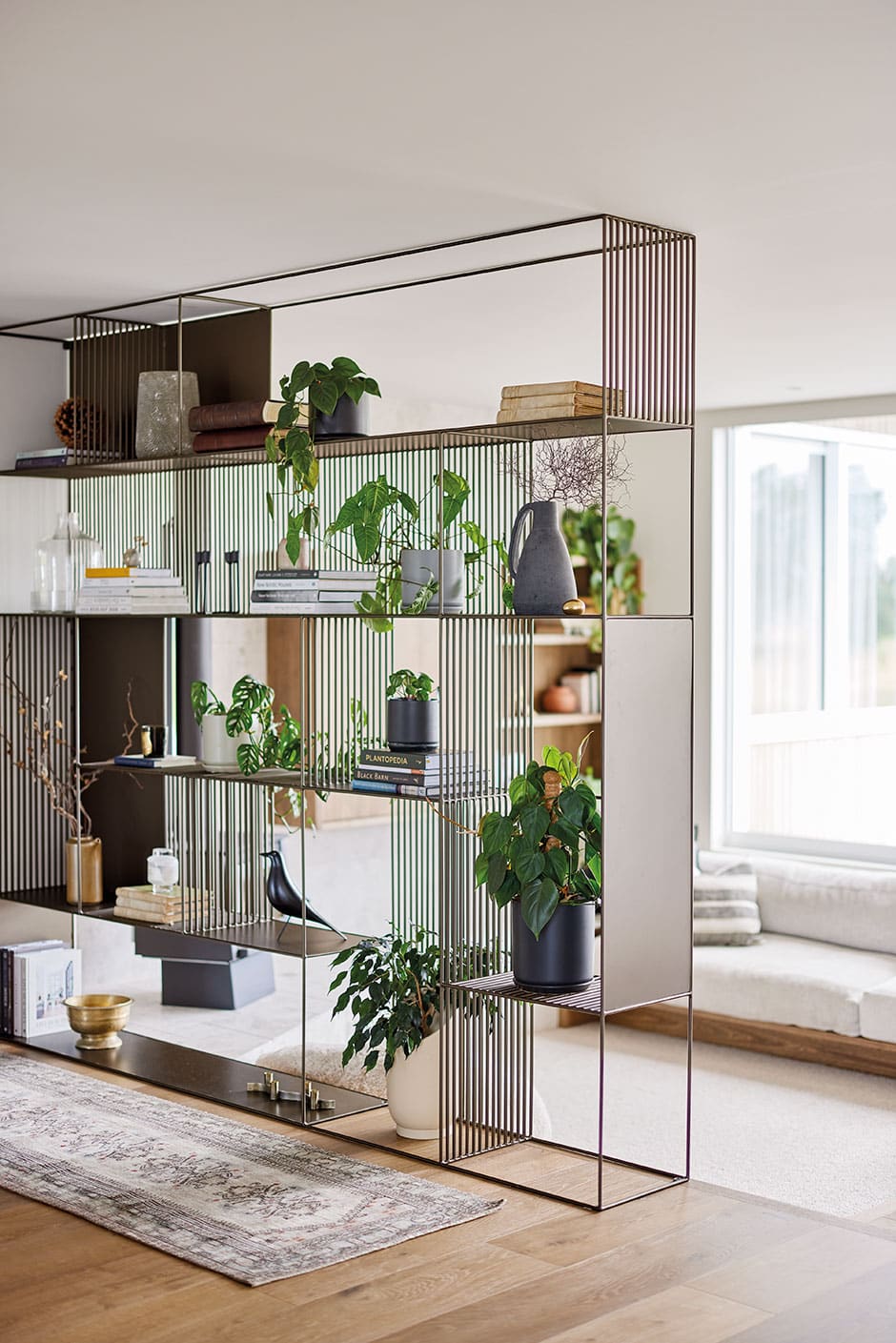 This is a house infused with sentimental touches that connect to the past. Its owners have lived on this site for several years, but when their three kids turned into teens, they needed more space than the existing 1950s abode had to give. With the costs outweighing the advantages of renovating, they opted to build new, while honouring the old home with mid-century design details: clean lines, muted tones, generous windows, built-in elements, timber craftsmanship, interior level changes, forms that follow function, integration with nature…

The first thing you encounter at the top the stairs to the second storey (where the bulk of the living takes place) is a mid-century-style shelving unit, a piece Annique designed to help distinguish the different zones within the new home’s open plan. It allows a view through to the windows on either side, yet makes the sunken lounge behind it feel private, while also providing a place to display potted greenery, books, objects and heirlooms. A hallmark of Annique’s aesthetic is the use of pieces that tell personal tales, treasures like the pinecone on the top shelf collected from the family’s holiday property; the brass gong on the wall in the stairwell, found by one of the owners’ fathers on his travels to India; and the lamp on the built-in desk in the main bedroom, a throwback to the owners’ OE. 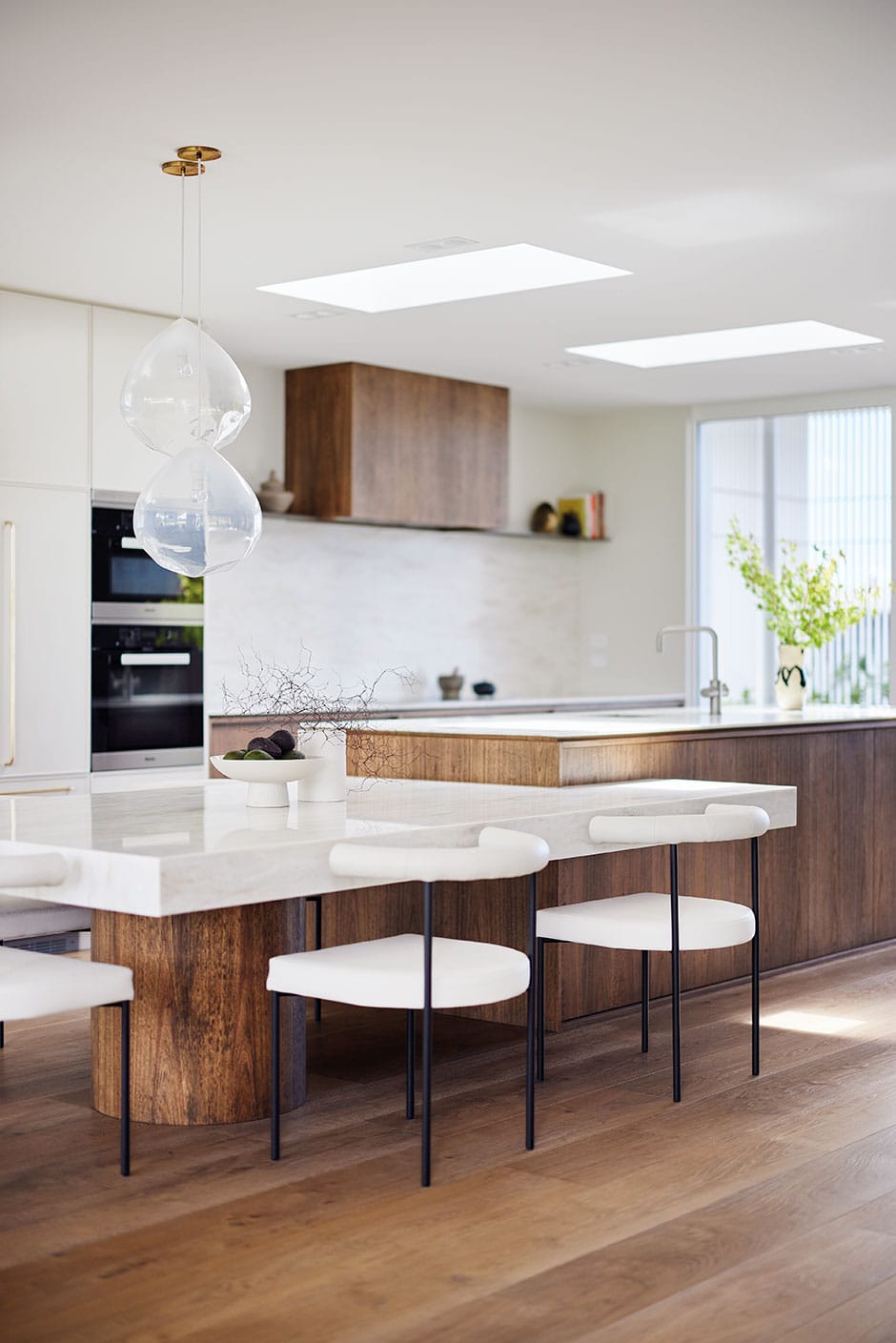 This is a house made cosy and welcoming through its use of textural, timeless materials. Even the pale kitchen benchtops and stone surrounding the fireplace have a warm vein running through them. Complementing these paler shades is a palette of browns — comforting colours. “I was keen to achieve spaces that make you feel like you don’t want to leave them,” says Annique. “The sofas’ foam squabs are feather-wrapped; the wool carpet is super soft; and the couple’s bedroom has a window seat they can lie on to read a book in the morning sun, a dedicated dressing area, and a sauna in their ensuite — it’s a real place where they can be.”
Having first-hand knowledge from the original home of where the sun came in helped Annique devise a lighting plan to enhance the distinct ‘moments’ she’s created in the open- plan interior. Rather than loads of downlights that don’t get used, feature lights predominately provide what’s needed to supplement the abundant natural rays the carefully configured windows invite in. In the evenings, they fill the home with a soothing golden glow. 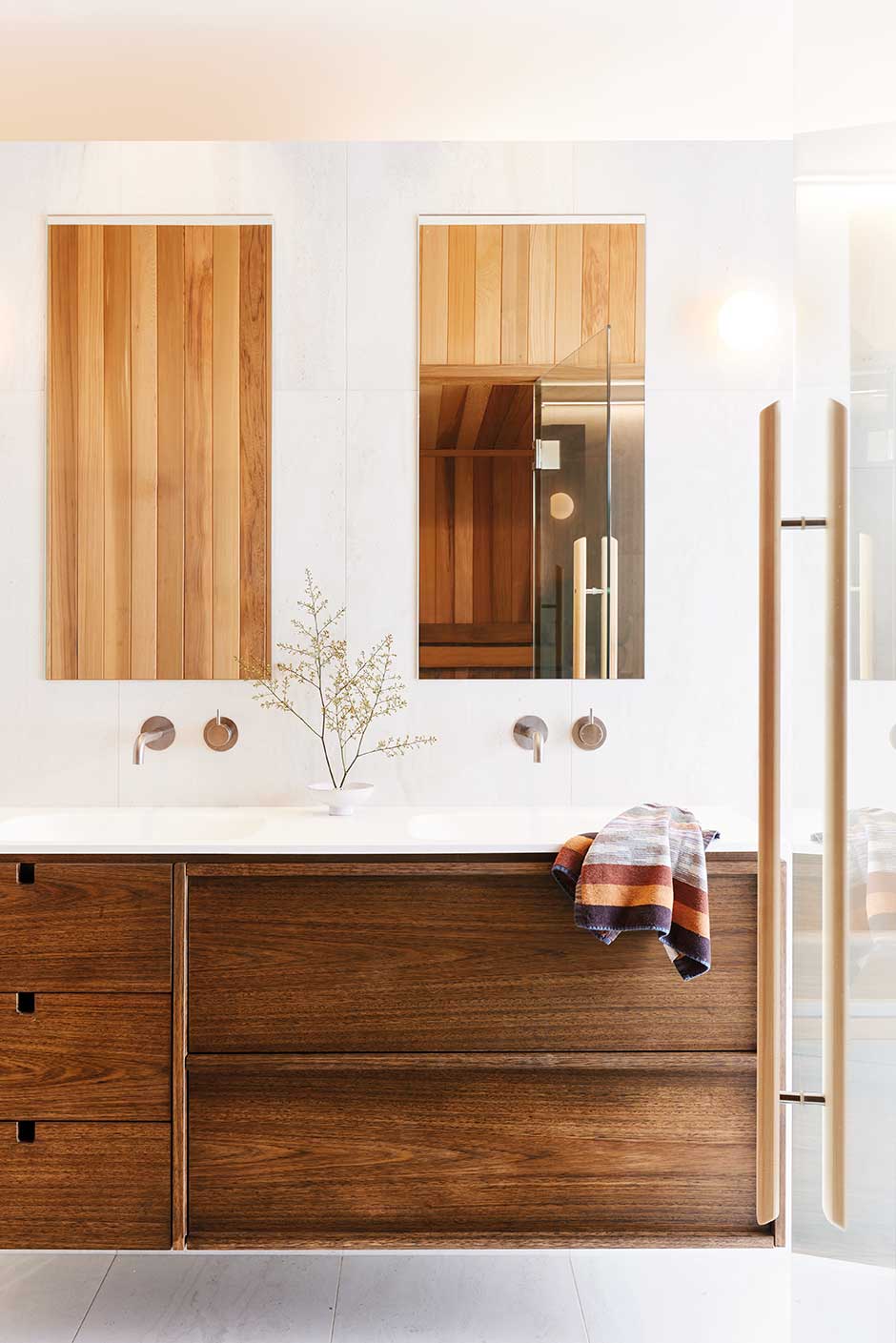 This is a house with a kitchen that spans the entire width of the building, where the close-knit family begins each day together. “You don’t usually get a kitchen that long, and it presented some interesting opportunities,” says Annique. “I was able to give them a full working kitchen that has views to either side, integrated cabinetry for schoolbags and other kids’ stuff, and a drop-down dining table at the end of the island that gives the children a place to sit while their parents are making dinner, and vice versa. There’s also a breakfast nook hidden in the pantry.” 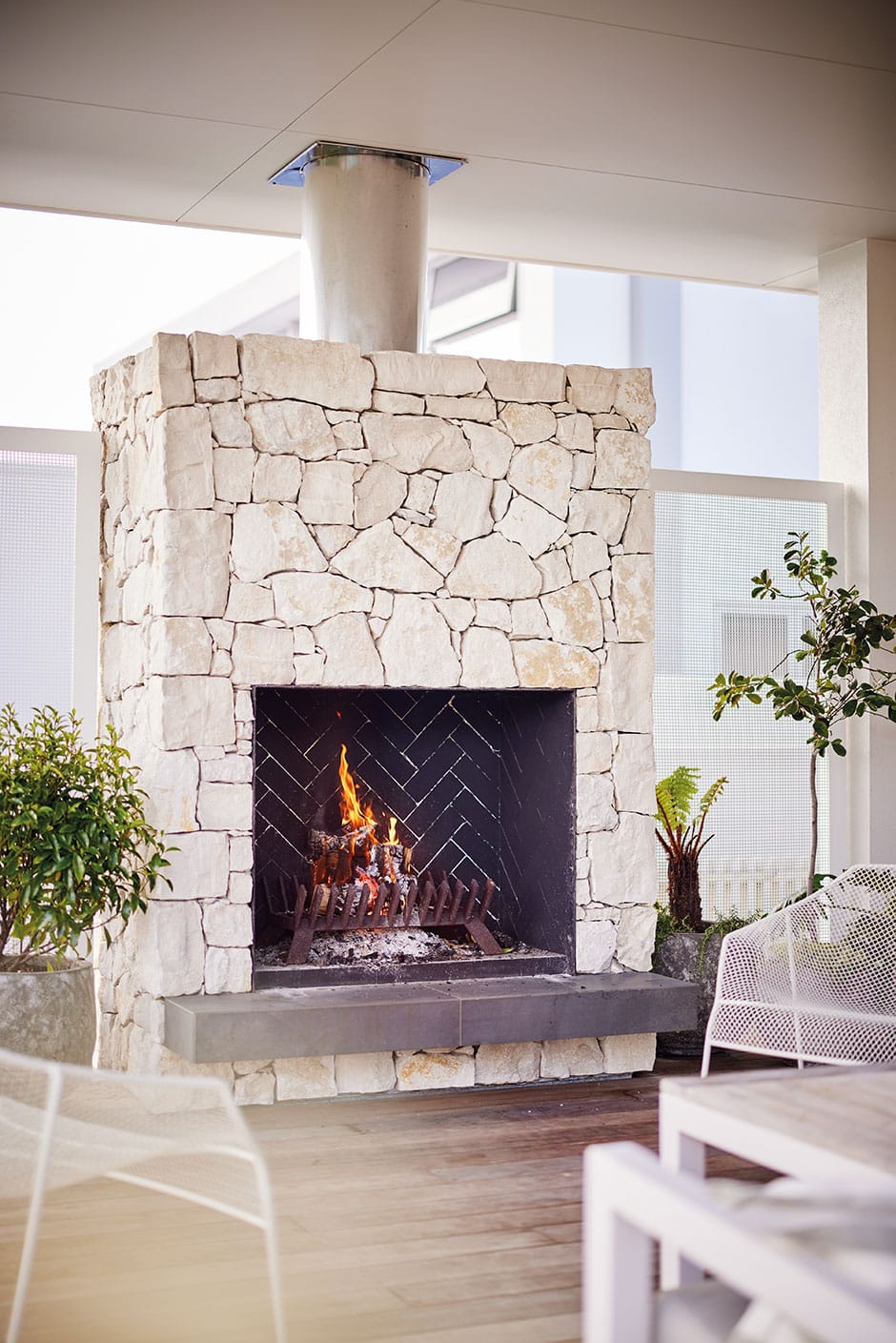 This is a house that’s absolutely beautiful, yet above all feels very homely. It’s an ‘us’-through-and-through kind of house.
“The owners are humble, kind, practical people, and it radiates their sort of energy,” says Annique. “When they moved in, one of them said, ‘I feel like I’m in a dream’. As an interior designer, that’s a really heart-warming thing to hear, that you’ve created that for someone and they feel that way about it. Life isn’t without its struggles, and this project has reminded me of the power a home has to give people a safe place.” 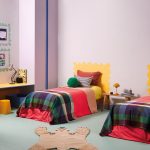 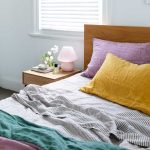