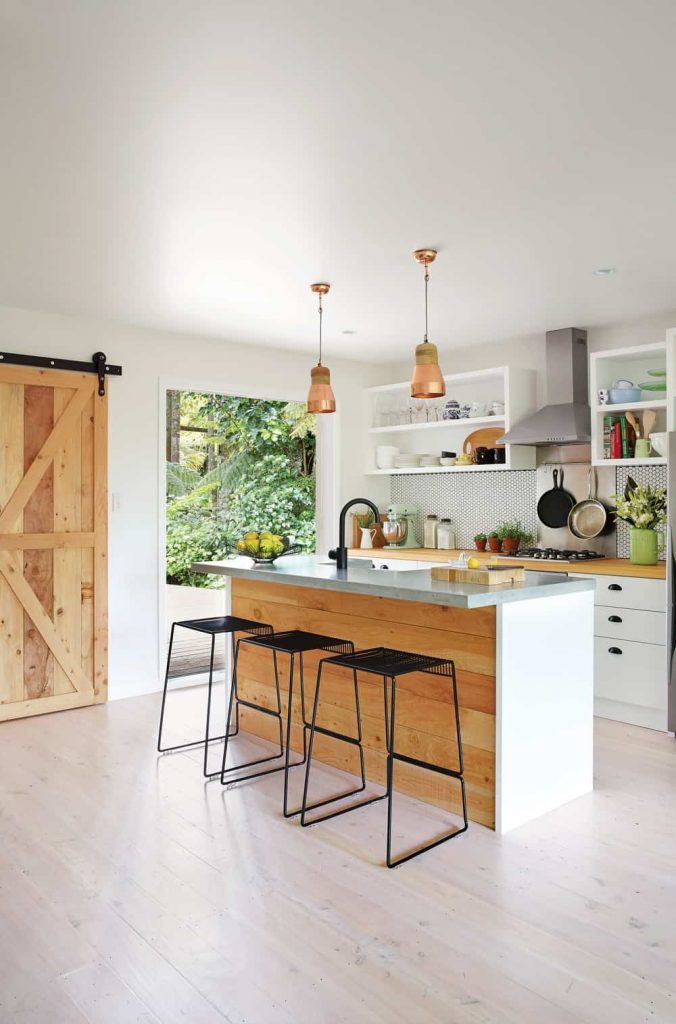 If you’re going to tackle a major renovation it helps to be a carpenter – especially one married to a housing portfolio manager.

Nestled in a forest of New Zealand natives, a duck-egg blue mid-century home pops out of the foliage. A single glance at this West Auckland property is enough to glean that it is not just an ordinary house on an ordinary street, but a thoughtfully renovated retreat from the hectic buzz of city life to be found just a few kilometres away.

The home’s owners, Marianne and Sean Falconer, were both Waikato born and raised, but had been living overseas for years before returning to New Zealand in 2011.  Auckland was the obvious choice for Marianne’s marketing career, but Sean was reluctant to live the city lifestyle. The leafy suburb of Titirangi was a beautiful compromise.

After many weekends spent scouring open homes, they knew they’d found the place for them when they stumbled across an untouched 1958 abode tucked away on a private street. It was everything they wanted: space, privacy and tranquility. Floor-to-ceiling windows on the elevated front facade framed the property’s extensive bush views; an established garden provided a screen from the neighbours and the location offered wild West Coast beaches for surfing and bush tracks for hiking. Plus, a bonus for Sean, there was a good shed with space for all of his building projects, and ample room to restore his GB400 motorbike. They wasted no time – the deed was soon in their name.

Still, as exciting as their purchase was, they clearly had a do-up on their hands. The house was dark and dingy, with retro wallpaper and well-trodden carpet. Luckily they had some serious in-house skills to call on. Owner of Falcon Builders, and with 14 years’ experience as a carpenter, Sean was more than fit for the task. And knowledge garnered from Marianne’s work with the Housing Portfolio at Westpac would help them add value to the property.

As the house was largely liveable, adding an extra bedroom and living area was the first priority. “We wanted to add value,” Marianne says, “but we also wanted to create space so our out-of-town friends and family could come and stay.”

That space was found in the ‘dungeon’ downstairs. Successfully transforming the uninhabitable space into a second living room with a spare bedroom and ensuite gives guests their own space to relax downstairs – and provides a man cave for Sean to use the rest of the time.

This area is one of his favourite spots to relax after a busy day project-managing builds. It is also a place to display his favourite possessions; including his grandfather’s staghead, antique skis and a steering wheel from his old racing car.

But the most exciting part came in tearing this room apart rather than putting it together. “We discovered beautiful • Oregon timber beams with herringbone bracing in the ceiling structure,” Marianne says. “So we cleaned them up and kept them exposed to keep a point of interest in the room.”

Then it was time to move the renovation upstairs, starting with the kitchen. Careful planning and inventive handiwork were needed to make the small space more usable. “We pushed out the hallway, so we could add in the kitchen island,” Marianne says. “This was a must, because we love cooking.”

The macrocarpa kitchen island with concrete benchtop, both crafted by the talented Sean, gives extra bench space – and looks gorgeous too. “We love macrocarpa as it has a great smell and is naturally durable without the need for nasty chemical treatments, and we wanted to tie in natural materials wherever possible.”

The end result is an open-plan living space, merging the kitchen, dining and lounge. The area is light and spacious, and with outdoor living flowing from both the front and back, it is perfect for entertaining.

And guests are bound to be impressed. With Scandinavian elements, mid-century features and curious contemporary edges, this home does eclectic to perfection – piles of character having been added to its strong bones.

Reflecting on the couple’s teamwork, Marianne says: “If I have a vision, Sean knows how to execute it. His craftsmanship goes beyond building work, to metalwork and more – he really can make anything. Typically I bring the soft furnishings and colour to the table, and Sean has the structural ideas and carpentry detailing.”

When you walk around this stunning home, the quality of workmanship, quirky design features and seamless flow is indeed evidence of the marrying of two talents. 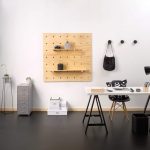