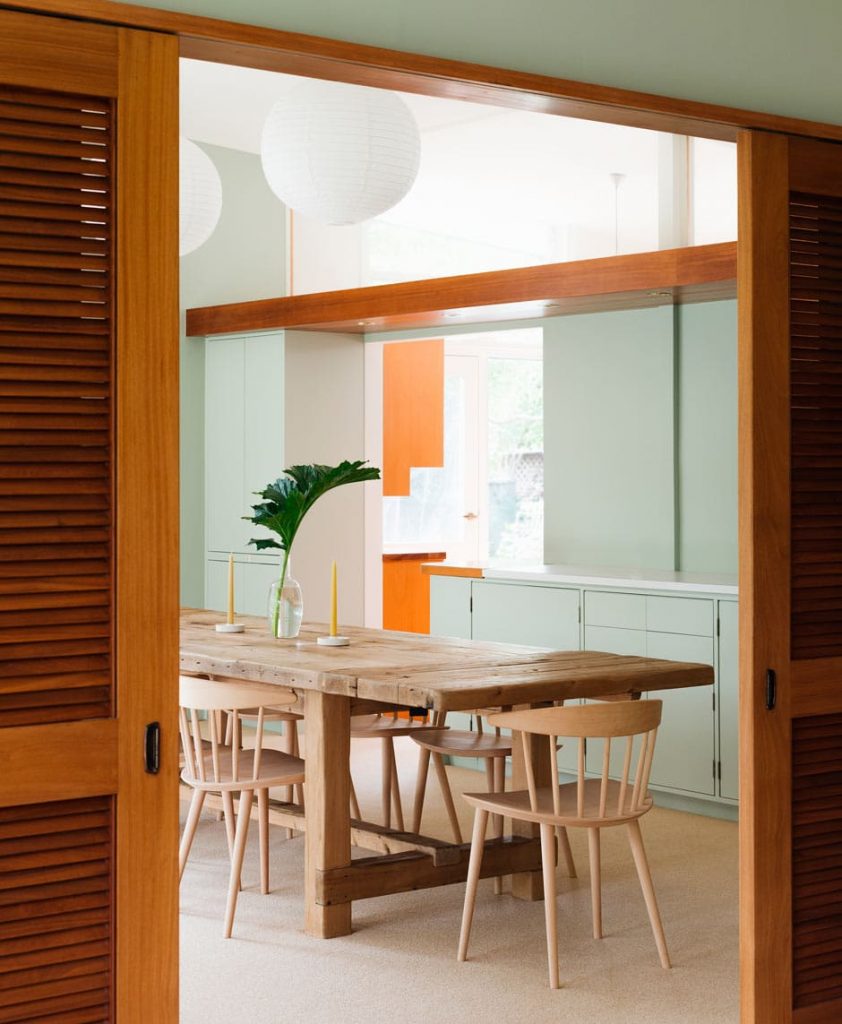 The couple who live in this modernist marvel still can’t believe their luck.

In the quiet Kapiti Coast town of Waikanae, a mid-century retreat fondly known as Riverbank offers its owners Tara Morton and Nick Walbridge an idyllic escape from their busy jobs in the nearby capital. Surrounded by rambling gardens, the home’s intriguing geometry juts out into painterly foliage that filters light inside through floor-to-ceiling windows surrounding the house from front to back. 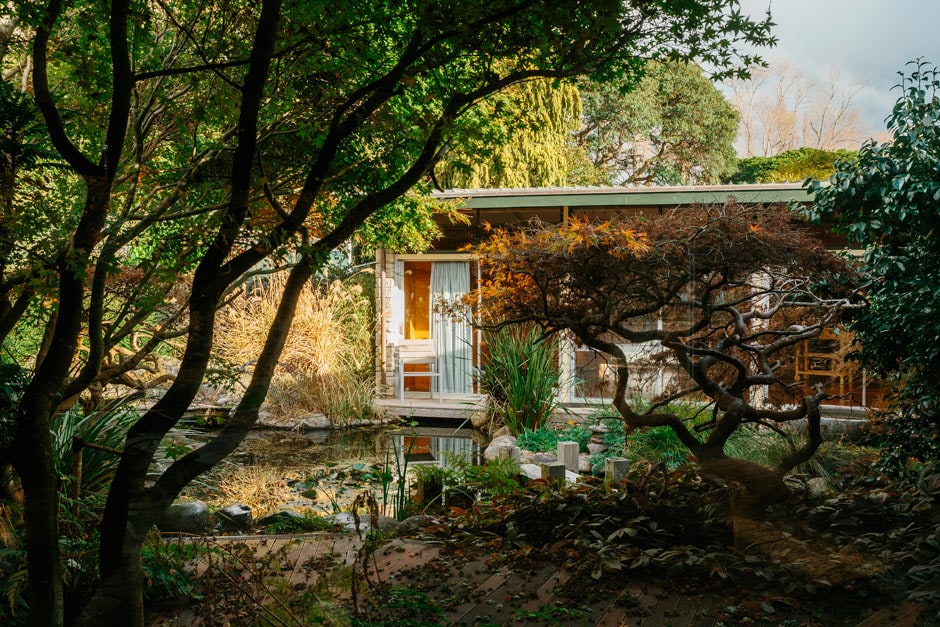 Policy advisors Tara and Nick hadn’t always considered a secluded sanctuary the ultimate place to call home. Over the years, their work at the Ministry of Foreign Affairs and Trade led to offshore postings in locations like Beijing, Cairo, Washington DC and New York, so for a long time they were all about big-city life.
“Tara stumbled across the online listing for Riverbank while working in Egypt in 2015,” says Nick. “We’d been living in New York for five years and were on the hunt for a home back in New Zealand, and its lush botanical greenery seemed like a welcome tonic to Cairo’s sand and dust. Having accidentally not filtered her property search to make it specific to Wellington City, she wound up getting hooked on Riverbank before she realised it was actually in Waikanae.” 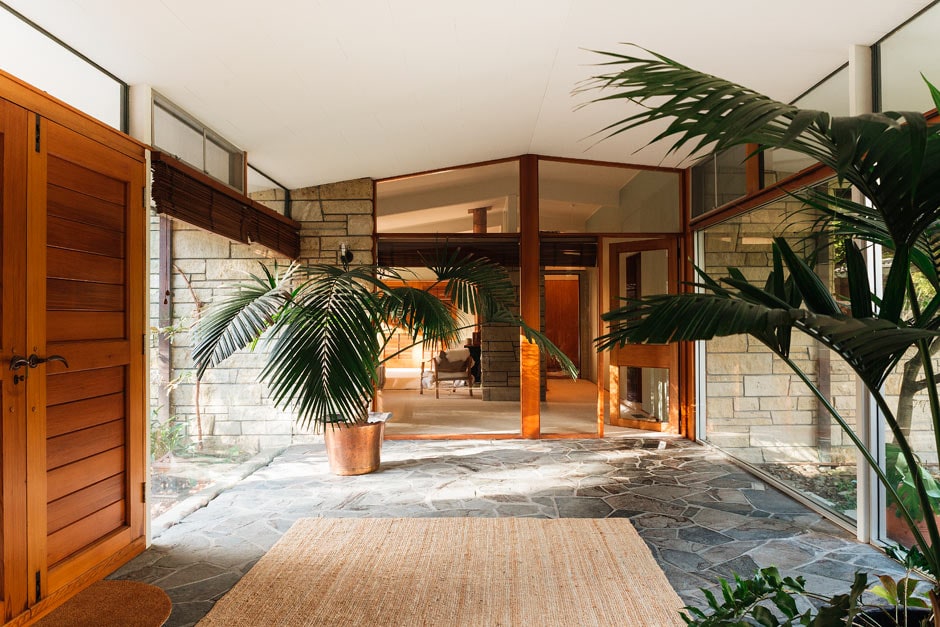 Back in New York, it took some convincing to get Nick on board with the idea that a large property in small-town New Zealand was the antidote to the hustle and bustle of their expat lifestyle. “The idea of moving to Waikanae and taking on such a huge place seemed ludicrous — especially with our limited gardening expertise, having lived in apartments for years,” he says.
When Riverbank disappeared from the market, it seemed as if the decision had been made. Tara assumed it had been sold and tried to move on — while keeping one eye on the property sites to see if it reappeared. “It seemed to offer everything that big cities like New York and Cairo didn’t: lush greenery, wide open space, a tennis court, and a pool that was hard to believe,” she says. “The incredible mid-century architecture had a Japanese/Californian vibe that felt beautiful and relaxed.” 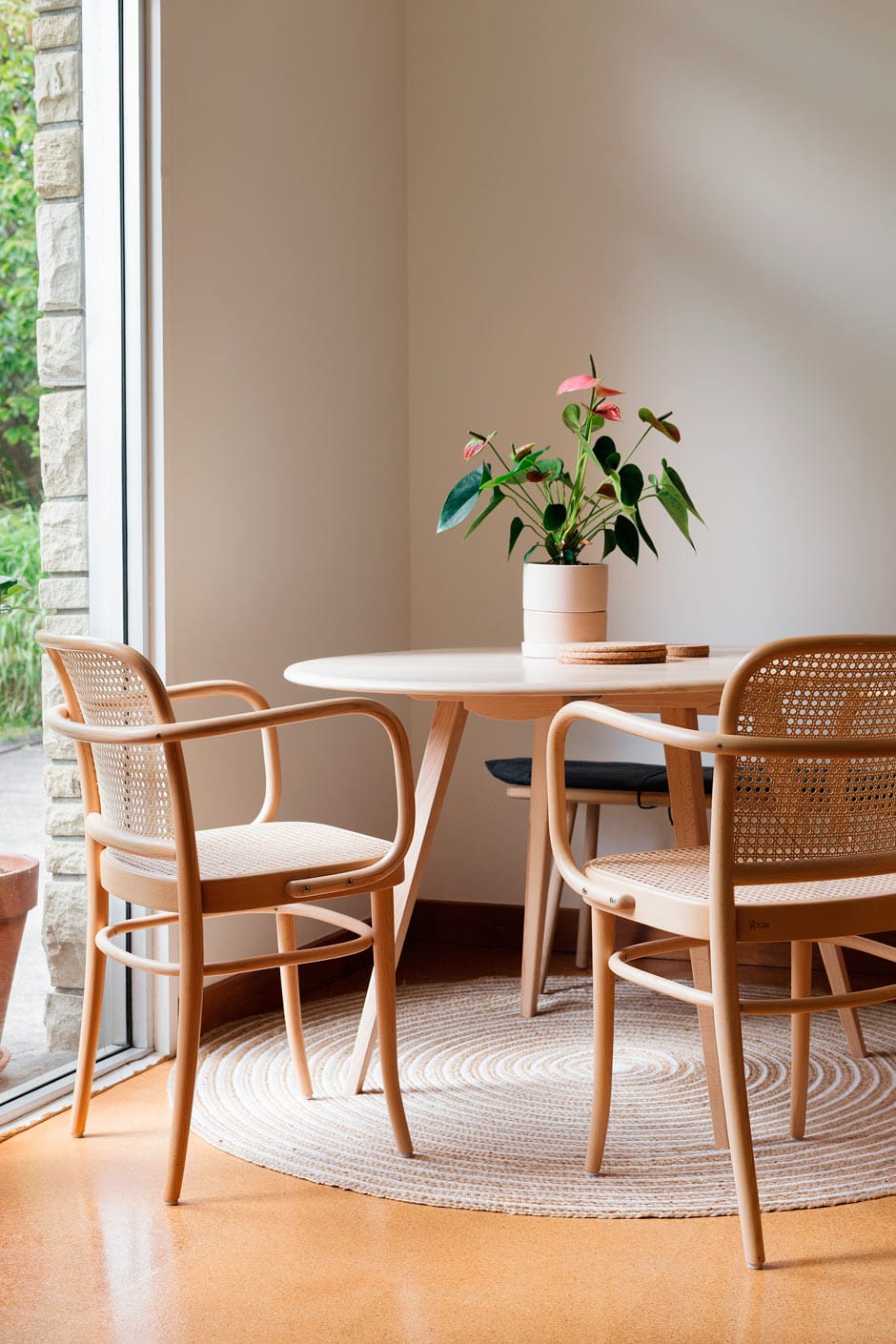 Months later, Nick was preparing for a trip home to New Zealand when Tara had a last look online. To her delight, there was Riverbank, with the auction set for two weeks later, the day after Nick arrived in Wellington. With no time for second thoughts, he flew in, caught a train from the city to Waikanae to view the house, and began to prepare for action at the auction the next day. As Tara waited eagerly on the phone in New York, he all but won the house at auction, and following a period of negotiation, their dreams were finally realised — in the spring of 2016, Riverbank was theirs. 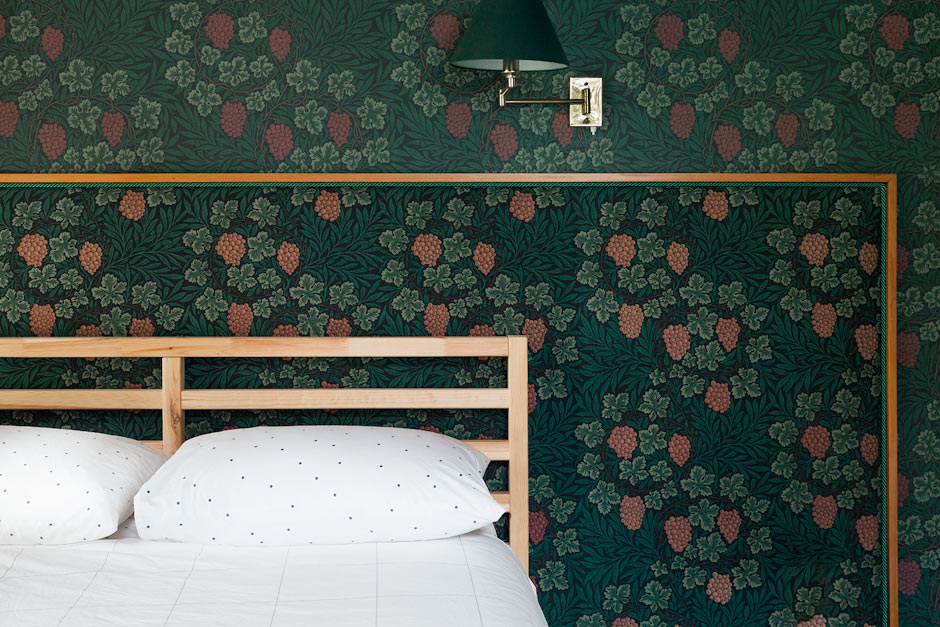 The long settlement period gave the apartment-dwellers plenty of time to plot how they were going to fill a 410m2 home with three bedrooms, a study and a studio. “Tara had been dreaming about this place for so long that she’d actually started scouting and selecting furniture before we bought it,” says Nick. “Using the floor plan as a guide, and a detailed spreadsheet, we effectively furnished it completely before moving in, all while living in New York.”
The modernist aesthetic of the home, built in 1965 by original owner Lloyd Parker, was well worth honouring, so the couple took a pared-back approach to their furnishings. “We were inspired by some of the innovative design happening in hotels in the US — The Standard Miami and Ace Hotel Palm Springs in particular,” says Tara. “We were also influenced by Scandinavian modernism and a bit of a laid-back surf/camp vibe, and wanted to mix all of that together.” 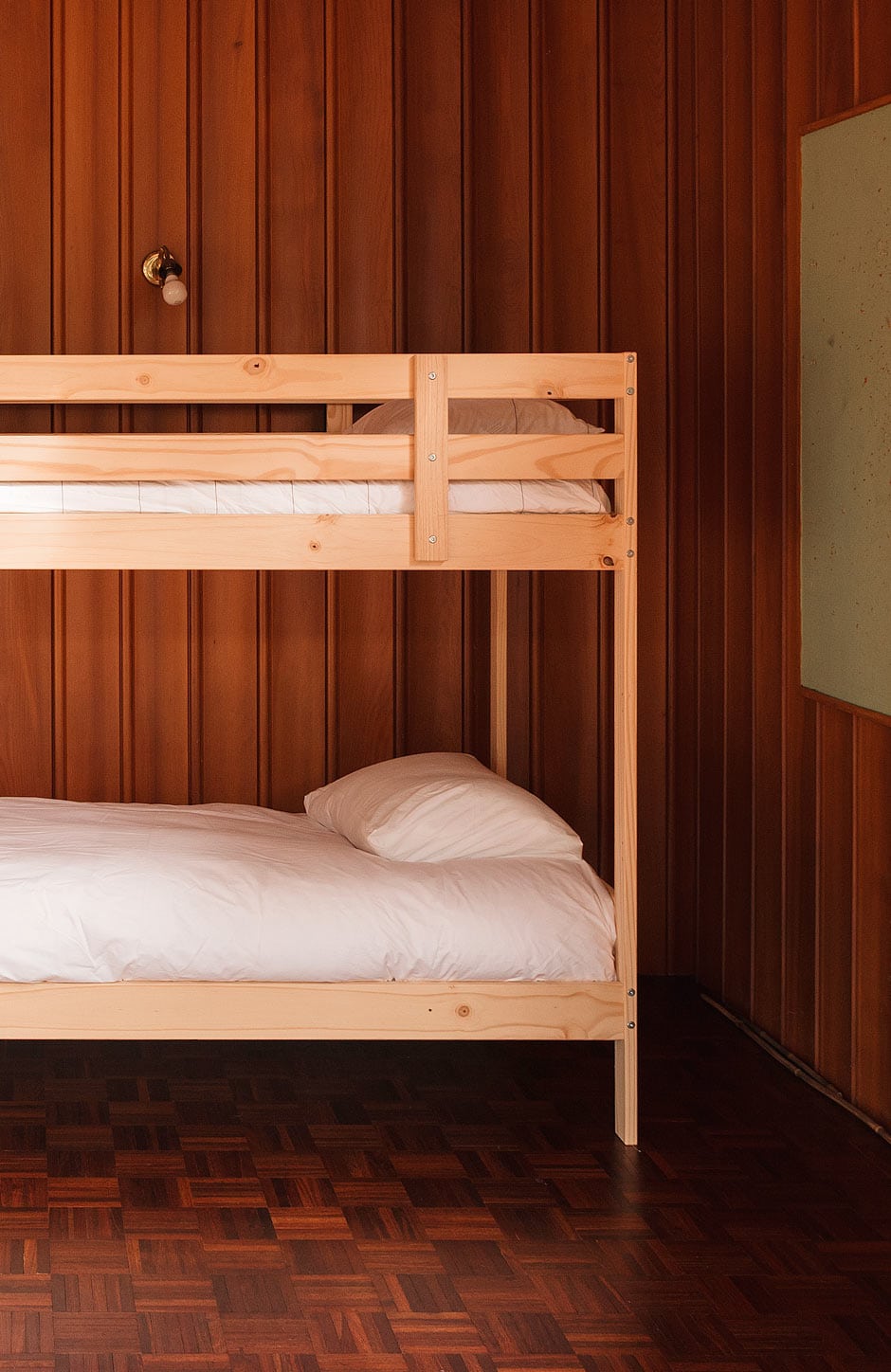 In April 2017, Tara and Nick moved in, giving themselves a month to paint the interior before they returned to work. “The previous owners had done some high-quality renovations, so we were lucky, but the walls packed a punch,” says Nick. “In the kitchen they were red, orange and purple, one bathroom was a dark metallic purple, and there was a yellow bathroom and a red-orange kitchenette in the studio.”
The couple enlisted the help of interior designer/stylist Katie Lockhart to come up with a colour scheme, and the resulting palette blends seamlessly with the home’s architectural details while enhancing the peaceful ambiance of the interior.
At the centre of the house is an entrance hall where stone paving and a pair of potted palms give you a ‘just arrived in Palm Springs’ welcome. As you continue inside, your eye is naturally drawn out into the Japanese courtyard garden developed by a previous owner, a landscape architect. Sun streams into the north-facing living and dining rooms all year round, and both spaces are kept cosy in winter by the log burner and gas central heating. Original features such as truly magnificent William Morris wallpaper offer charming Wes Anderson-esque moments. 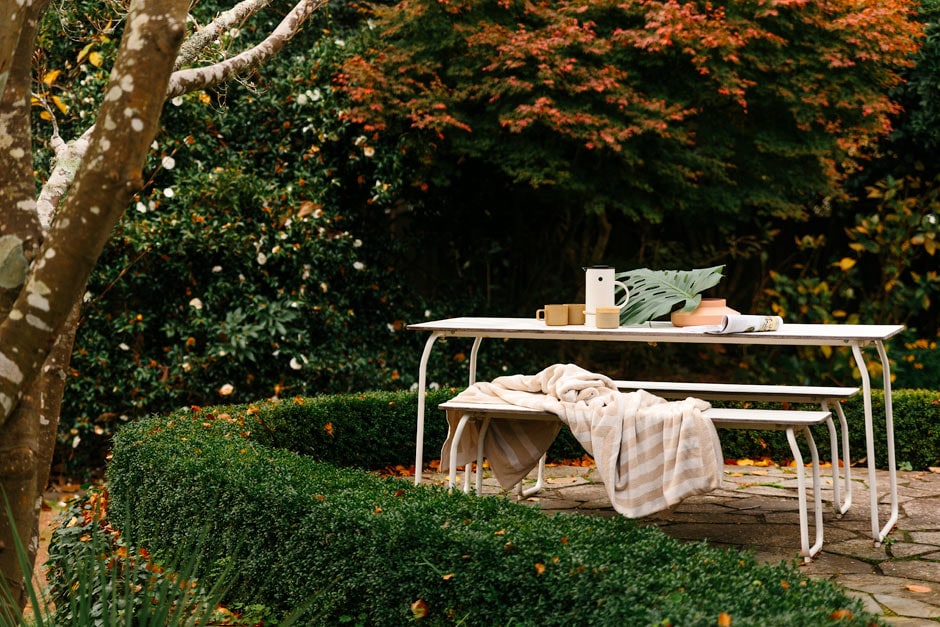 With a craft brewery and arthouse cinema within walking distance, Tara and Nick still enjoy some aspects of the life they had in Brooklyn, and with the picture completed by their straightforward train commute into the city for work, they say they don’t have a single regret about making the move.
“We love living in Waikanae,” says Tara. “Because it’s so completely different to the other places we’ve lived in recent years, we don’t really make any comparisons. We do miss the ease and affordability of online shopping in the US, and the somewhat limited nightlife options on the Kapiti Coast ensure we have to be a bit more organised about creating our own fun, but in many other places in the world, you couldn’t dream of living in a place like this while working in a capital city. We consider ourselves very fortunate.” 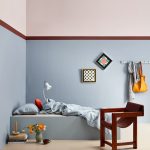 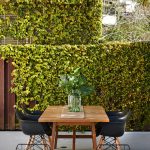