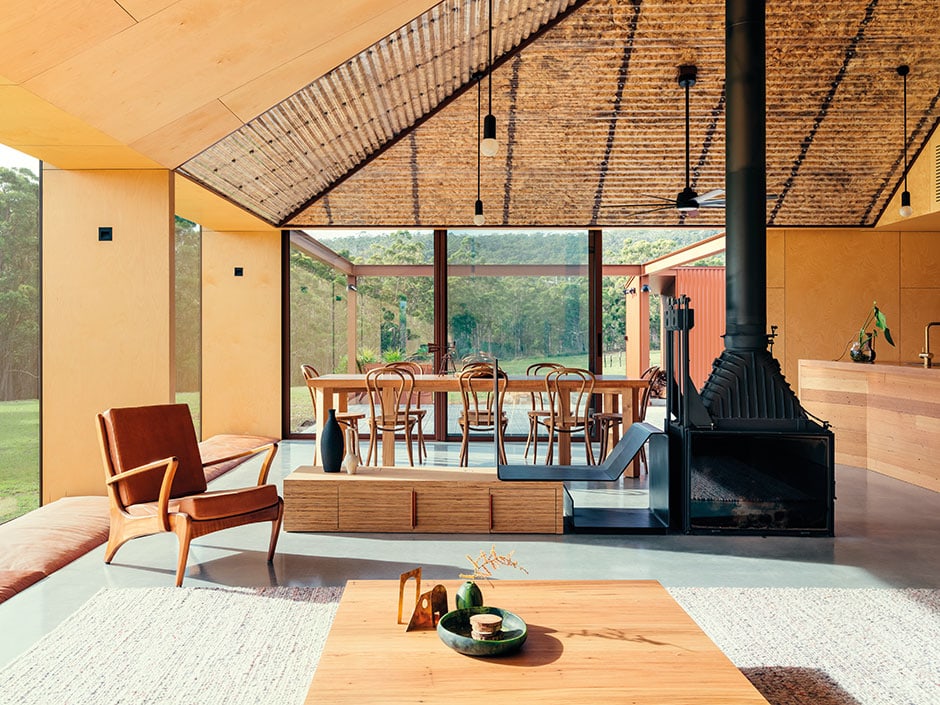 Elevating its surroundings to hero-detail status makes this dwelling on Tasmania’s Bruny Island something you just don’t see every day.

In association with Fisher & Paykel.

It’s highly likely that at some stage, you’ll come face to face with a sheep eye-balling you through the floor-to-ceiling windows in this house. Led by Fiona Dunin of Melbourne’s FMD Architects, the design of this rural dwelling on Tasmania’s Bruny Island quite deliberately planned for that kind of calm ovine contemplation when responding to a brief for a low-maintenance home with a close connection to its immediate and wider surrounds — a contemporary interpretation of the Australian farmhouse. 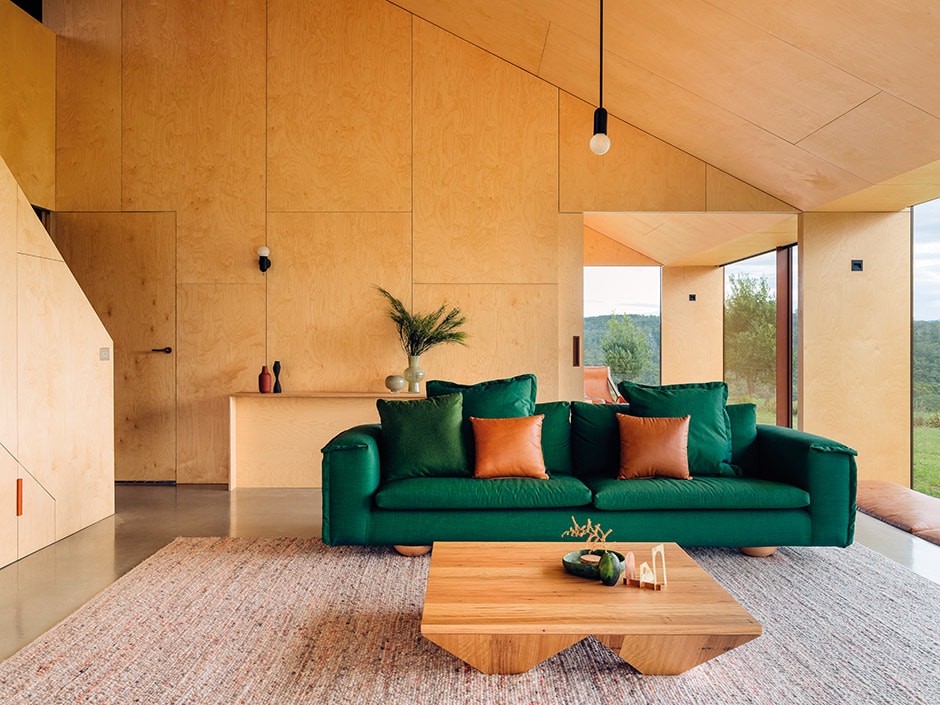 The homeowners — a couple who divide their days between this working sheep farm and city life in Melbourne — also sought a house that could accommodate just the two of them for most of the year, and 20 or more guests at other times. The resulting shed-like dwelling (named Coopworth after the property’s woollier residents, and humbly situated directly in a paddock with not so much as a fence around it) provides that with ease, in a home that reinterprets the local architecture in a palette of rust-coloured corrugated steel and brick — a nod to the historic red shacks dotted over the island but in a hue closer to that of the earth. 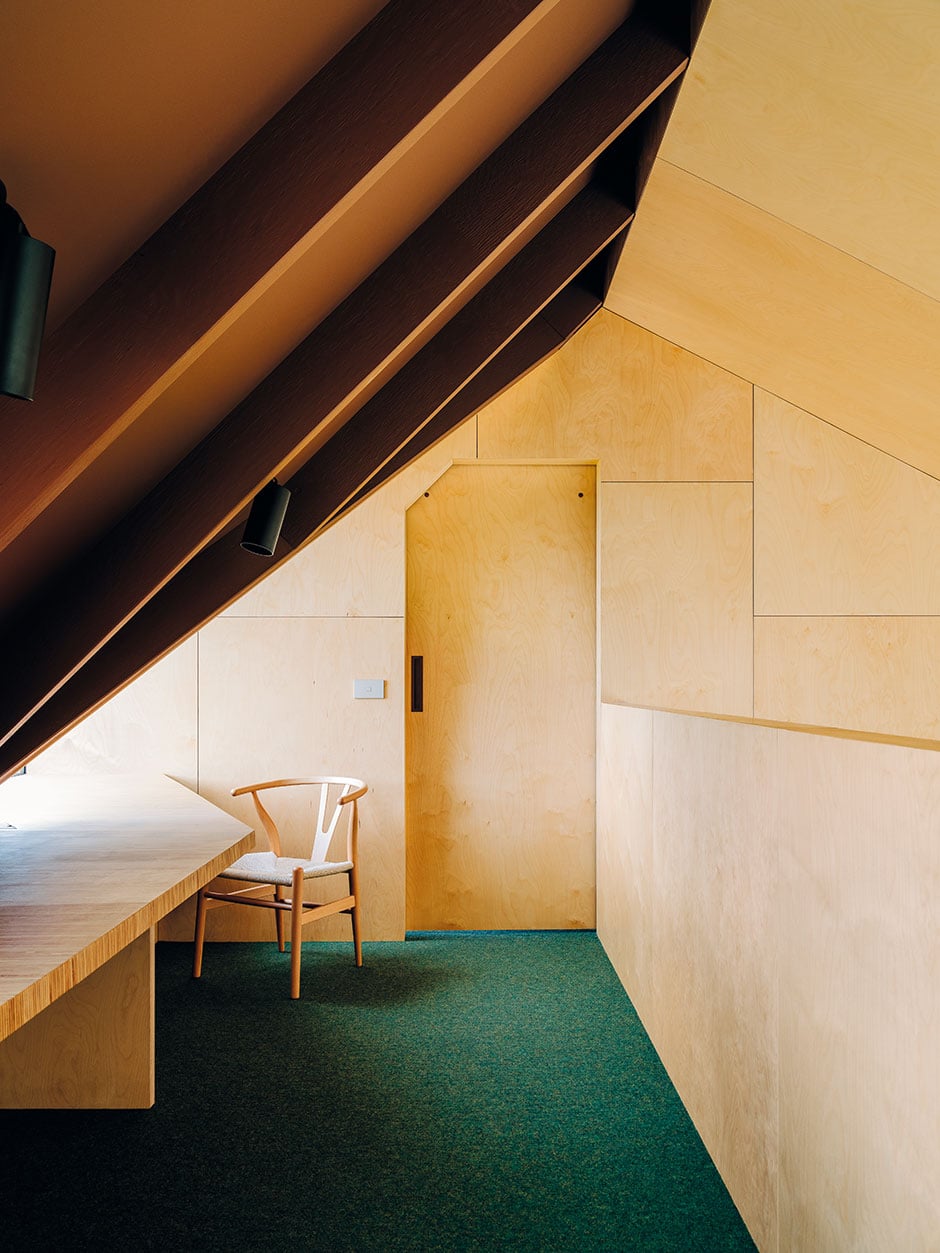 The angular forms of the home sit beneath gabled, hipped, dormer and skillion rooflines, the silhouettes of which similarly call to mind the island’s ramshackle shacks, as well as its rugged mountain ranges. The roof is without gutters to reduce maintenance and leaks — instead, rain flows naturally and quite beautifully down the double-glazed windows into channels on the ground that shepherd it away from the building. Interesting window niches and frameless glazing pushed right to the edge of the concrete floor slab capture the northern light and views of the paddocks, plus the peaks and waves in the distance, immersing the occupants in the landscape, and the beauty and brutality of the wild, changeable weather at this southern end of the island. 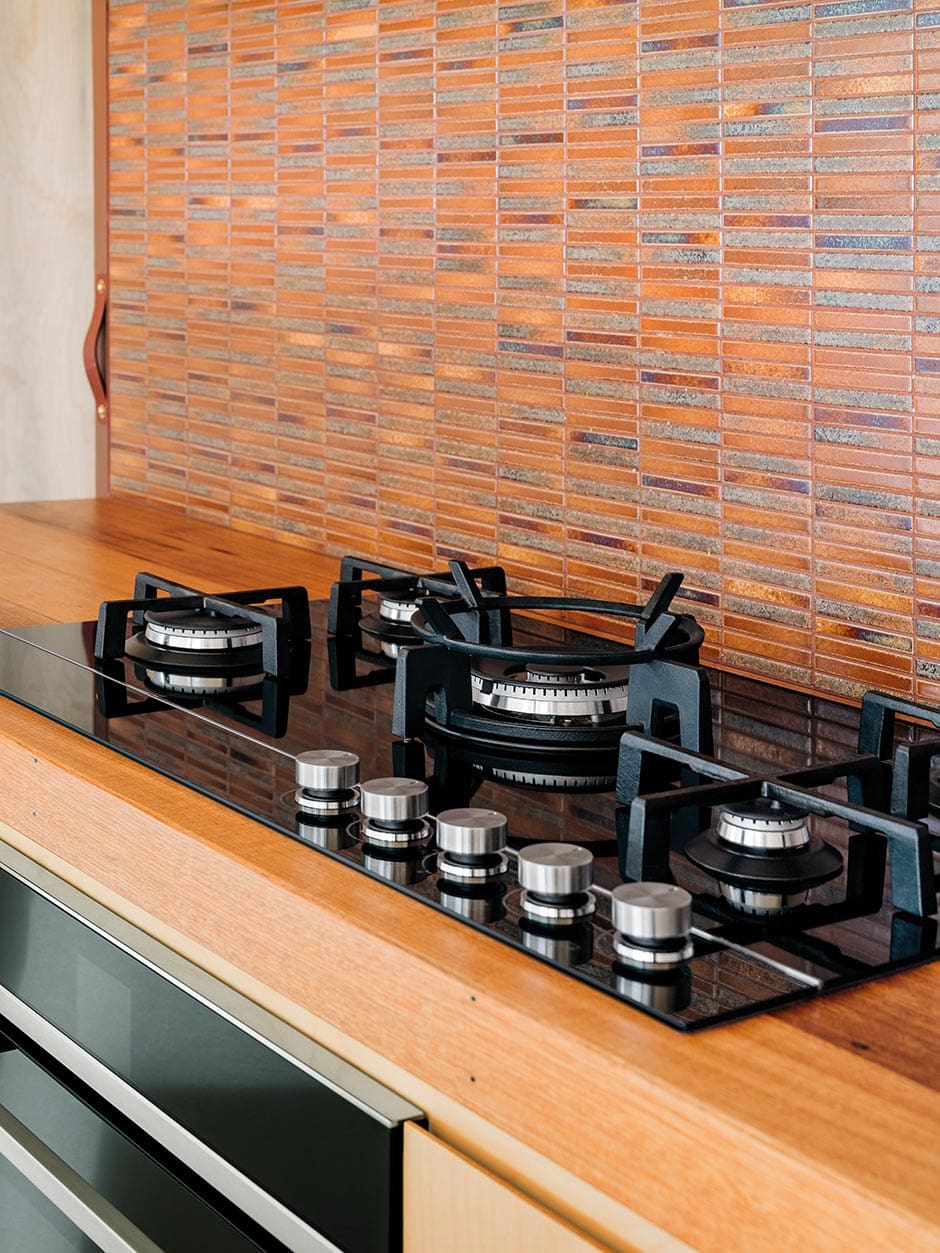 Coopworth’s sustainable initiatives all but eliminate its running costs. Supported by solar and rainwater storage solutions as well as septic tanks, the house is off the grid. Assisted by a wood burner and fans, it’s passively cooled and heated through inclusions like the ventilation wall panels on the western elevation that harness the wind. The ceiling is sealed with clear, polycarbonate sheeting, the portion over the dining space and kitchen complete with a standout addition of Coopworth wool that both enhances the ceiling’s thermal performance and celebrates the home’s agricultural connections, forming an artistic abstract fresco.
Diverse spaces — generous, intimate, private, shared — allow the owners to adapt this house to suit their needs throughout the year. This ability to close it down when only they are here, the compact footprint (a deliberate ploy to maximise the use of the surrounding arable land), and the lowered ceilings in the service areas and three bedrooms also contribute to effective climate control. Even the thick mattresses and upholstery of the window seats/sunken daybeds are purposeful, absorbing heat in summer yet allowing the sun to penetrate the concrete flooring beside them during winter.

Described by the architect as being “like a giant slumber party for the grandkids”, camping-esque sleeping arrangements (secret bunk beds built into cupboards made private by curtains, and the aforementioned daybeds running along an internal eave on the northern periphery of the home) cater to the owners’ desire for the house to expand for guests. The farmhouse-style kitchen does the same in high-tech style. In the open-plan main living zone on the lower level of the two-storey abode, it reflects the emphasis on entertaining, allowing the owners to enjoy a seamless transition between kitchen, dining and living, and linking with the outdoor courtyard complete with a second fireplace for all-seasons use. 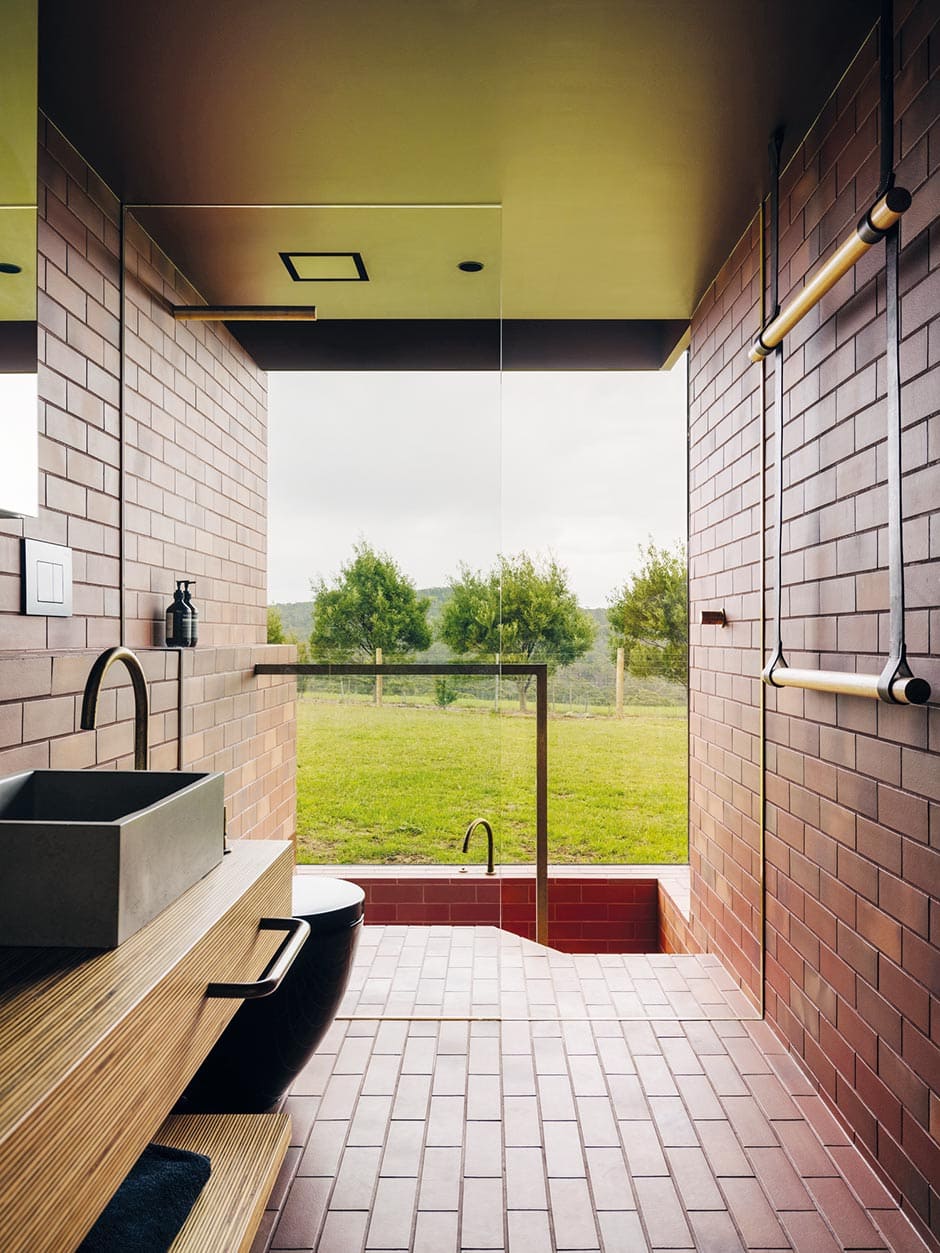 Leading appliances by Fisher & Paykel were chosen early on in the interior design process to ensure they could be seamlessly integrated into the kitchen’s simple scheme. In the adjacent laundry (which is also located near the mudroom — an essential ingredient for a working farm), this includes a 10kg front-loading washer and 9kg heat pump condensing dryer with an eight-star energy rating, while in the kitchen, an integrated rangehood, fridge freezer and double DishDrawer dishwasher are slotted into the timber panelling. As part of a distributed arrangement of appliances that lets multiple chefs work independently and efficiently at the same time, two Fisher & Paykel ovens and a Fisher & Paykel cooktop provide a large prep area when hosting, with a pleasingly minimal appeal. All the other appliances are electric and feed off the solar array, but the cooktop cleverly provides gas as a backup in case of solar failure. With everything and everyone so expertly catered for, it’s fitting that this project has been the recipient of numerous awards and short-listed for several more. As much as the watchful gaze of the animals outside is due to their intrigue with their human neighbours, it might also contain some admiration for a home that definitely doesn’t follow the herd.
fisherpaykel.com 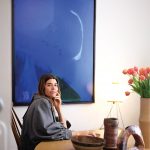 NextGlory be to Powersurge for these brass Halo vases 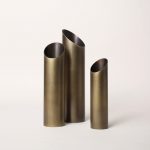