The best sets — décor and design ideas from some must-see movies.

What with lockdown dovetailing with winter, it’s fair to say movies have been the order of the day and night. Everyone loves inhabiting fictional worlds, but what if you could live in them for real? We’ve rounded up some cinematic interiors we wouldn’t mind recreating.

Stanley Kubrick was a very involved director and for this sci-fi epic, he had a hand in everything, right down to the furniture. Watch for iconic pieces such as pedestal tables by Eero Saarinen, Djinn chairs by Olivier Mourgue, an Action Office desk by George Nelson and cutlery by Arne Jacobsen — and how about that ornate bedroom?

Rom-coms don’t get much cheesier than this, though who cares when both of its heroines’ houses are goals in their own way? Whether you identify with Iris’s cute English cottage or Amanda’s all-the-mod-cons California pad, as is usually the way with Nancy Meyers movies, you’ll end up paying as much attention to the sets as you do to the storyline.

Top-tier tastemaker Tom Ford’s directorial debut, this drama is a real heartbreaker — and we’re not just talking about poor George’s palpable grief. It’s shot in the Schaffer Residence, an LA home built in 1949 by architect John Lautner, whose redwood panelling, warm bricks and floor-to-ceiling windows will have you pining for all things mid-century modern.

A fine example of Italian architecture of the inter-war period, Villa Necchi Campiglio in Milan is elegant in the extreme, and just as much a character in this film as passionate leading lady Emma. Oh for those marble floors and that amazing banister, the green sofas and the yellow dining room.

This black-comedy thriller made history at the Oscars in February for being the first South Korean film ever to win an Academy Award. Actually, it won four, and was nominated for its production design in part for the Park family’s flawlessly composed home, a triumph of clean lines constructed from scratch on an outdoor lot.

We can’t wait to see what Wes Anderson has dreamed up for his latest tale, inspired by his love of The New Yorker. Screening soon, it was filmed on more than 125 sets built in a rundown felt factory in France. 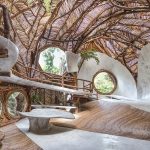 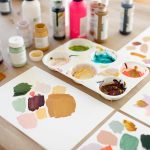