At home with Morven McAuley of creative ideas agency Tradecraft 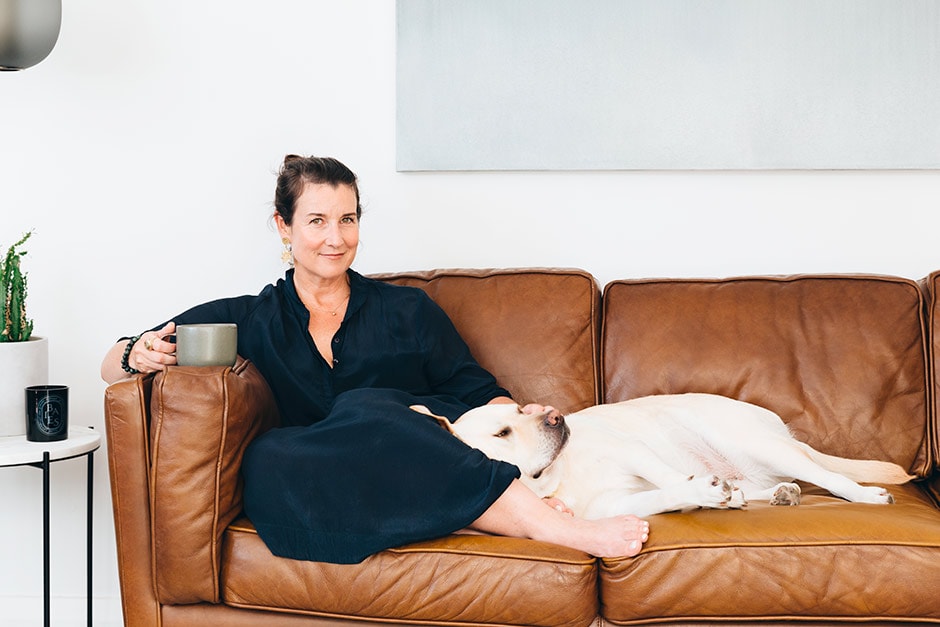 Step inside her small-scale slice of paradise, redecorated without compromise in striking black and white.

Founder of creative ideas agency Tradecraft, Morven McAuley, says her Auckland home allows her complete freedom of expression. In a world in which so many people struggle to buy a house, she’s acutely aware that having one to make her own is a real privilege, and figures that if she stays content in her little spot, she’s also leaving another house free out there for someone else to make theirs.

So Morven, how did you find your slice of urban paradise? I bought this house in 2006; it checked all the boxes. A 1930s build, it’s sound and small, so the maintenance is affordable, and it has great off-street parking and a relatively private backyard. Its location in Sandringham appealed to me too for its cultural hum and diversity.

What was your vision? At first, it was about getting on the property ladder. I thought the house was going to be too small for me long-term but would make a great rental; however, I changed my mind about that and became a fan of the small-home movement. I think we have an obligation to use fewer resources and create homes that don’t demand so much energy to heat or cool. I’m quite proud of the fact that I can vacuum this entire house using only one electrical socket — that right there is living the dream! So the vision changed from simply owning an asset to really making a home.
I renovated one area at a time, according to what really needed it and what I could afford. Hamid Zwart and his team at Your Builder did the most recent and extensive work throughout the house, Tim Laing collaborated on the kitchen, and Kate Ryan of Zones helped with the back deck and garden. 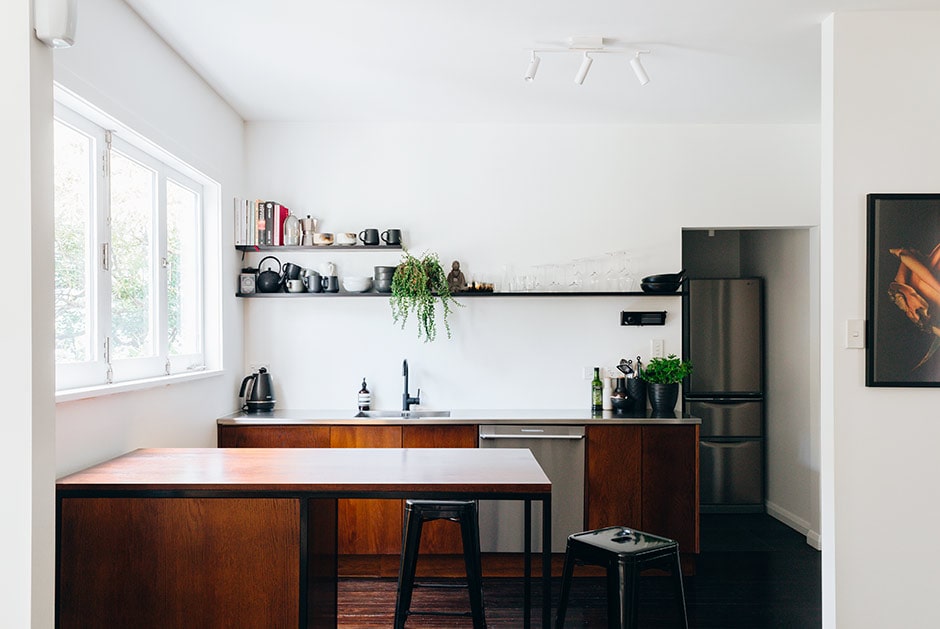 What was your thinking behind the minimal and moveable aspects of your kitchen? The kitchen came first because I spend a lot of time in there and the house is open-plan, so it’s always visible. The existing kitchen reminded me of a motel unit — it had out-of-date kitset cabinetry placed with only function in mind that really closed things in. I wanted to open up that lovely big wall to give the feeling of more space — more height and more light.
The moveable aspects I developed from thinking about how I could make the most of the space depending on what I needed from it. When I designed the ‘island’, I knew it might need to be pushed out of the way to sit under the window if I ever wanted to put a dining table in the space. That meant it also had to function as another bench, but I wanted it to look less like a bench or island and more like a designer sideboard. So it’s bench height, but made from black powdercoated steel and beautiful oak, the stain of which was inspired by a 1960s Ray Kappe  look. I love his use of wood, glass and steel, and formed, clean lines.
The other unseen aspect of the ‘island’ design that was important to me was that it allowed me to screw my pasta machine to the end. The ‘island’ acts as a pasta bench in the weekends, but when not covered in flour remains a minimal, aesthetically pleasing structure. 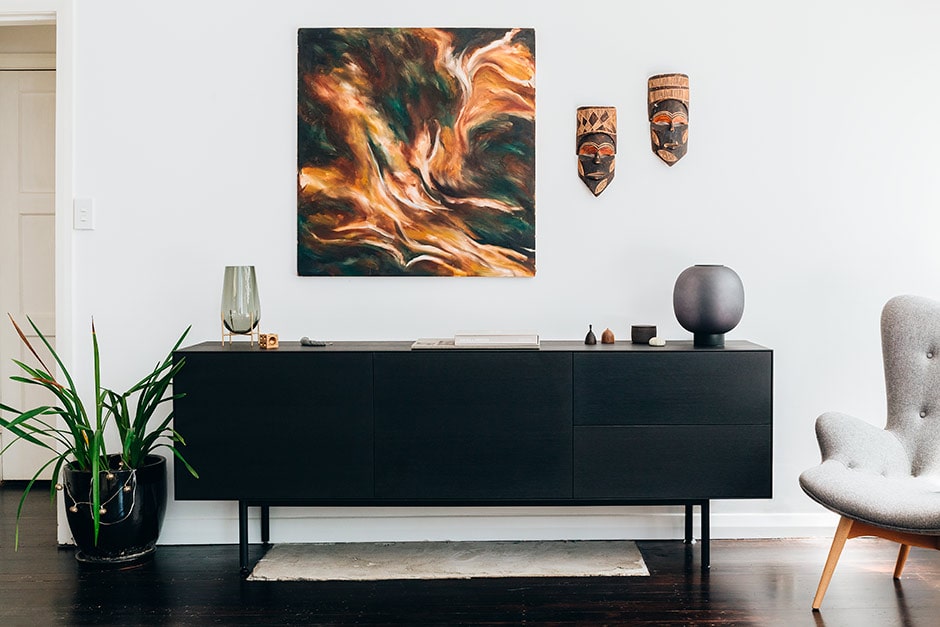 And how about your moody bathroom? I was nervous about going so dark, but because I was intent on staying in this house and making it a home, it meant I designed the bathroom I really wanted, without having to factor in how it might affect a sale. It’s amazing the freedom that comes from giving up trying to please other people.
I wanted my time in the bathroom to feel a little zen-like; I wanted to relax in there and feel as if I was in a resort somewhere in the rainforests of Bali. It had to be cohesive with the rest of the house but not matchy-matchy; I can’t handle bathrooms that look like the kitchen — spaces need to serve their purpose physically and also mentally. I knew I wanted to use natural materials — slate, glass, stone and wood — and going so dark meant lighting was extremely important, so I included three options: a wall mirror, ceiling spots and simple pendant bulbs that glow warmly, like candlelight.

You run your agency Tradecraft from home — how does that juggle work for you? Although this house is only 85m2, it has three bedrooms, which means I’ve had the luxury of being able to create an office space and maintain master and guest bedrooms. If I really need to ensure work stays in the office and life stays in the lounge, I can just shut the office door. Sometimes I need to do that, but most of the time I love having the door ajar so I can peek through to the art on the wall. I also make sure I take breaks when I’m working from home; I leave my mobile in the office and spend time on the deck in the fresh air. 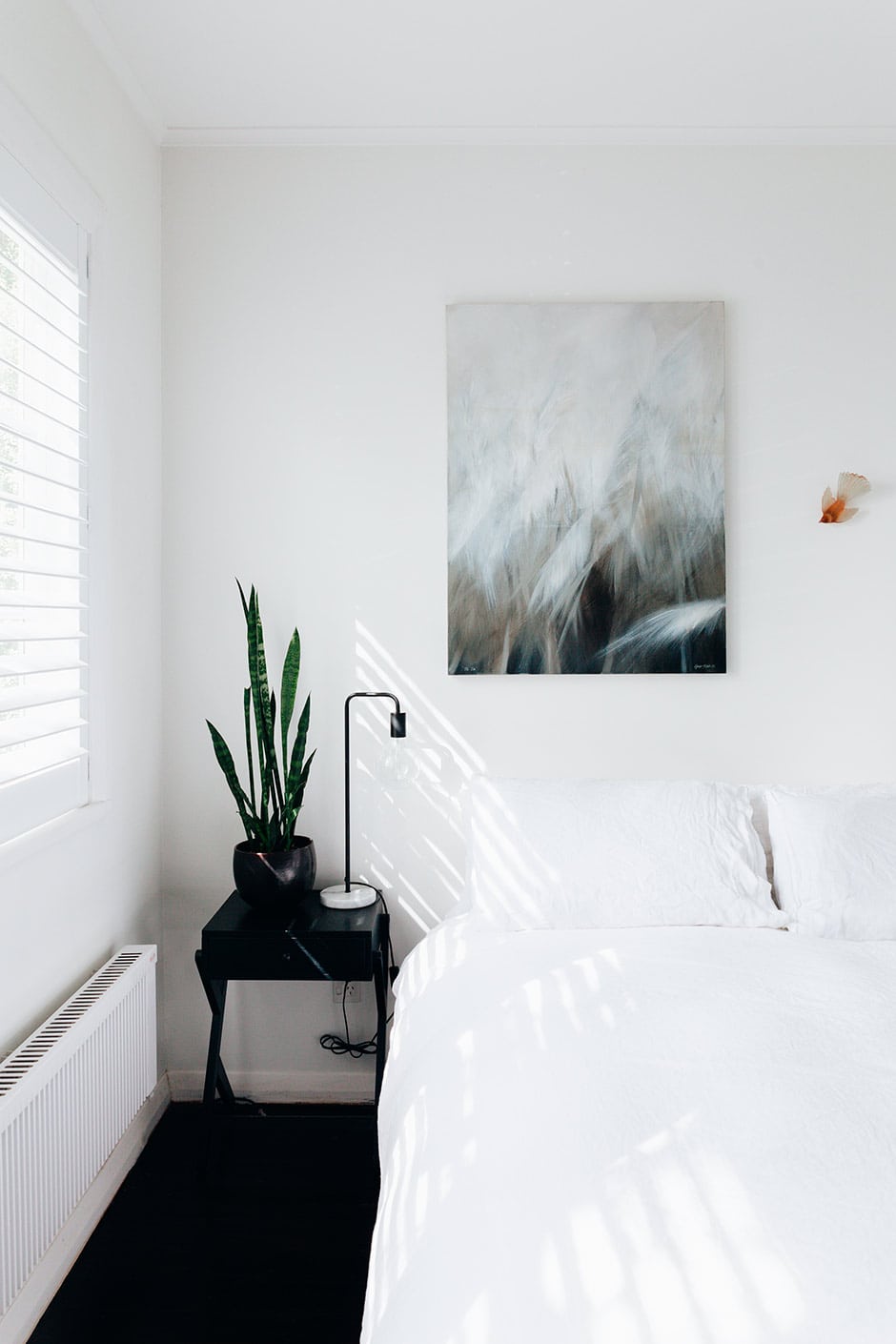 We love the way you’ve made the backyard a living space too… The house already had a small covered deck when I bought it, but I wanted a private nook — a place to chill out in regardless of the weather that would also make the house feel more spacious. I designed the renovation to extend the length of the deck and close in one end with shutters, leaving the existing roof to cover only that closed-in end. The result is a little nook in which you’re protected from the elements, while at the other end of the deck is a more open area out amongst the garden.
Creating that outdoor space has effectively doubled the house’s footprint. There’s a visual extension from the inside out across the deck and garden, and to ensure this view remains uninterrupted, I had long wooden French doors custom-built to allow a clean flow from the lounge onto the deck. 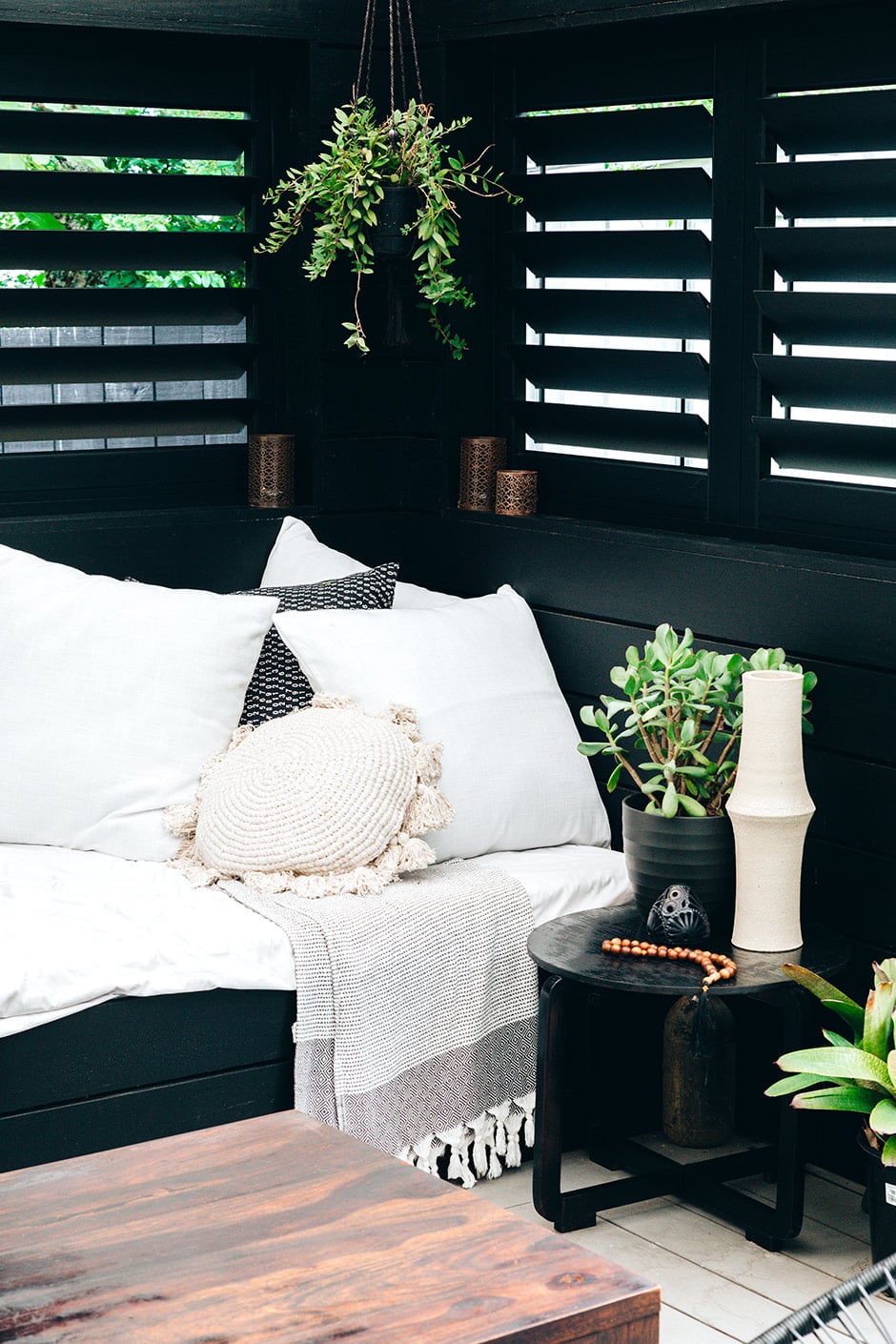 Do you like to entertain at home? I do. Given the size of the house and the way I’ve designed it, most of my gatherings happen in summer. There isn’t really enough room in the lounge to entertain, so that’s where the deck comes into its own. The daybeds are set up for Sunday afternoon beer sessions with friends and the table provides a spot for proper dinner parties or barbecues. It does work in winter too — I just need to invest in some good outdoor heating.

A lot of your work is aligned with the hospitality industry — have you picked up any hosting tips? I used to be an ambitious cook, but I’ve learned you miss a lot of the party if you’re busy checking your soufflé. Instead, I’m all about simplicity, antipasta and bloody good wine; seriously good cheese, a little prosciutto and a gherkin can go a long way. These days I leave it to those inspiring restaurateurs to provide the highbrow cuisine in my life!

Is there a time of day here that you particularly love? I get up at 6am most mornings to walk my dog, Scratch. When we get home, I feed her, then scatter birdseed on a flat rock in the garden. I make a cup of green tea and often just take a moment to sit on the deck and watch the sparrows, doves and finches having breakfast. I really love that the birds feel at home in my garden. It means a lot to me to see them pulling worms from the soil and nesting in the trees; it’s a sign that the garden is healthy and a nice respite from the traffic that endlessly passes in front of the house.

Which everyday objects bring you joy? I have a lot of little ornaments dotted about the place that are meaningful to me. The African masks on the wall in the lounge belonged to my dad, who bought them when he was 22 and living in Mozambique. The brass doming block on the sideboard below them is one of my old jewellery tools from my previous life as a goldsmith. I don’t really miss making jewellery, but that little block is a nice reminder that I once crafted gold into keepsakes for people to covet.
My artworks all have personal stories behind them too. I’m lucky to have talented friends like Greer Clayton, Bonny Beattie, Kelvin Mann and Simon Kaan. Actually, I still owe Simon a piece of jewellery for his print. When he reads this, he really ought to get in touch!
tradecraft.co.nz 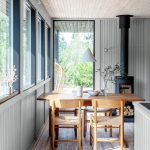 NextHot off the press – an update from editor Alice Lines 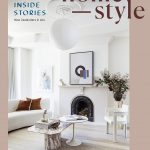