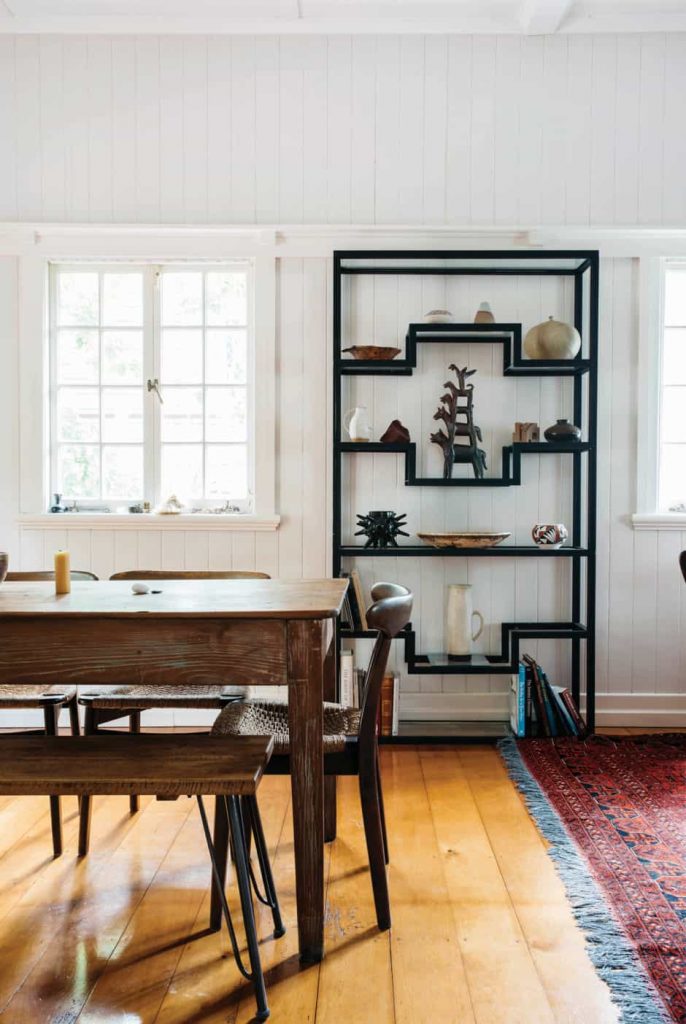 A young Brisbane couple shifts from a tiny urban apartment into a suburban cottage, affording them more space to create.

Nicolette Johnson and Tom Dawson moved into their charming Queenslander rental cottage in Brisbane’s inner west just over two months ago, but already it feels like a well-loved home with numerous personal touches. The move has been a refreshing change for the recently married couple. After spending almost three years in a tiny urban apartment where they’d refined the art of compact living, they were feeling a strong pull toward having more space for the next stage of their lives. Nicolette had recently immersed herself in pottery-making and she was producing at a rate that would benefit from a home studio. Queenslander-style homes are well-suited to having a studio space underneath, and this new home provided that opportunity. 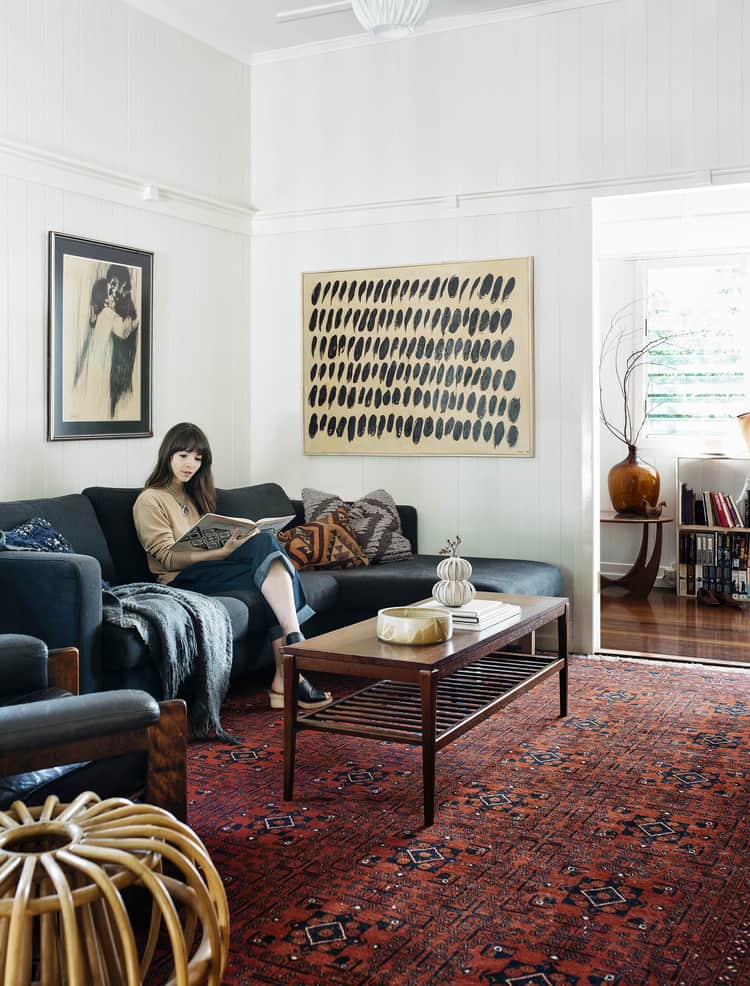 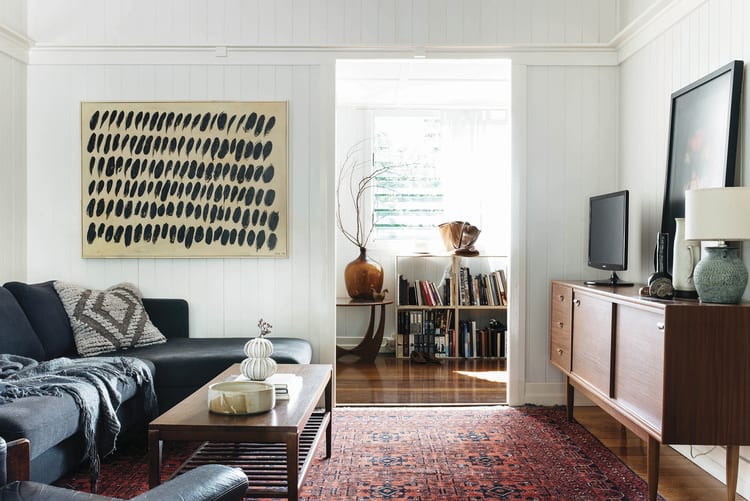 Although still modest in size, with two bedrooms and one bathroom, the cottage has everything Nicolette and Tom need. The front door opens into a light-filled sunroom lined with French windows, which the pair use as a library, having thriftily made their own ply shelving to house their book collection. Their cat, Lola, can often be found nestled in one of the curtains perched on the back of the bookshelf where it’s snuggly and warm.

The sunroom leads into a large living space comprising the lounge and dining areas, with French doors extending onto their deck, which is enshrouded with trees. Suffice to say they get a lot of visiting wildlife; the local cockatoos are evening regulars.

The kitchen branches off the dining area and offers a private, leafy outlook. “With more space, we’re finding we cook all the time,” Nicolette says. “I love the open shelves and being able to display our collection of chopping boards. Lately we’re always eating sourdough dipped in olive oil.” When the couple moved in, the kitchen surfaces were a fiery red, but Nicolette swiftly covered them with marble contact paper – a clever way of creating the illusion of bright, modern finishes on a budget. 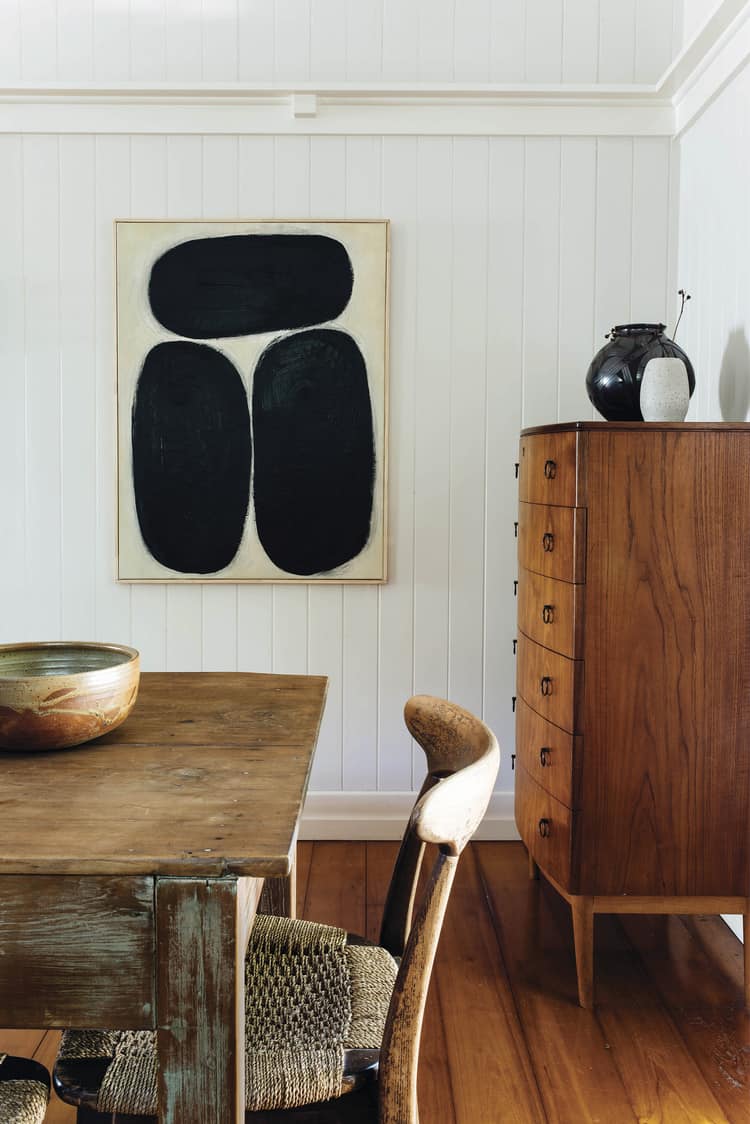 There were spatial symmetries between their old apartment and the new house, so rearranging their furniture has been easy. “The Pierre Vandel bookcase fits well in the living room. I like • being able to see it when I look through the kitchen doorway.”

The bookcase displays one of the couple’s favourite pieces – a sculpture depicting the Musicians of Bremen fairy tale by the Brothers Grimm. Having belonged to her late grandmother, Nicolette brought the sculpture back to Brisbane from New Mexico, where she spent much of her childhood until moving to Australia as a teen. This background really informs Nicolette’s decorating style: “I’m very inspired by 60s modernism, the American southwest and natural materials. I’m also influenced by artisans like Ariele Alasko, an American woodworker who has an amazing ceramics collection. She’s great at artfully arranging things on surfaces – and now that we have more surfaces around the place, I’m enjoying creating evolving vignettes of my own art and objects.” 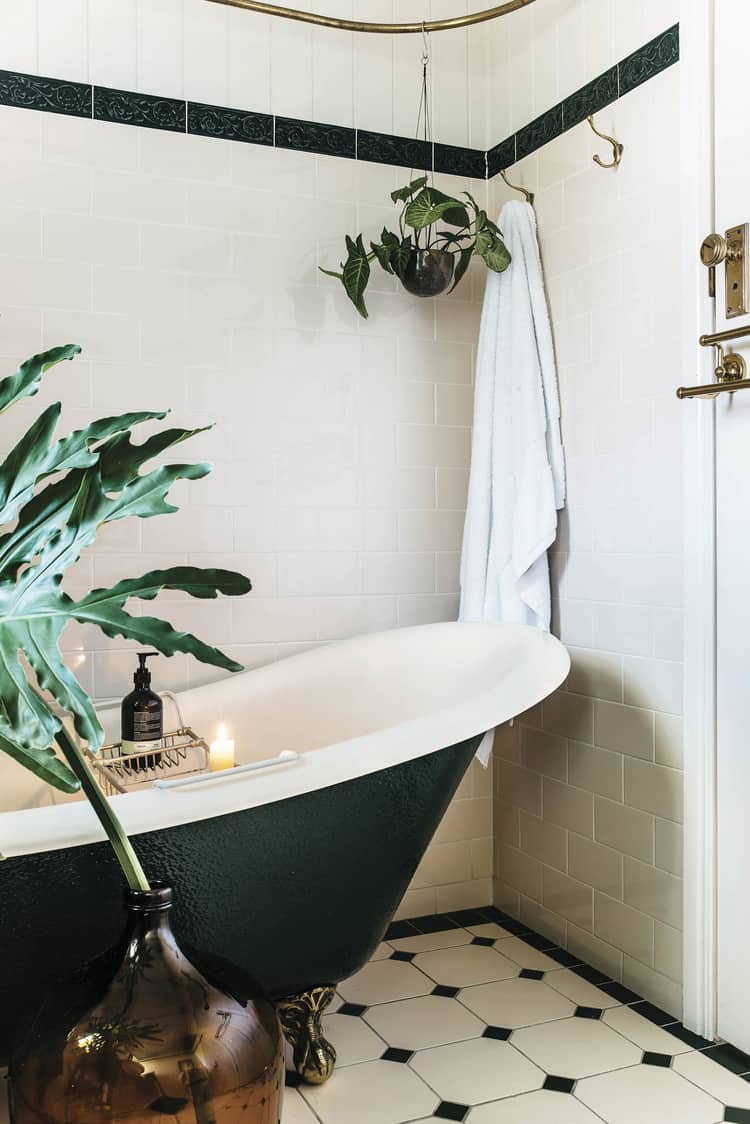 Indeed, the art and objects are thoughtfully positioned around the home, imbuing it with personal style. Two abstract paintings are the new stars of the living area. Post-move, Nicolette decided to get her paintbrushes out. “I’ve painted before but haven’t liked the results. But I love these! The smaller one is inspired by a picture of artist Georgia O’Keeffe’s studio that was taken for an 80s edition of Architectural Digest. It features a white table with her collection of round polished stones lying everywhere. It is simple and calming, so I wanted to emulate that in some way.”

The second, larger painting has a joyful mark-making nature: “I had a lovely meditative afternoon making that one.” Tom is also stoked with the results: “I love being able to see Nic’s art every day. She takes such joy from making beautiful things, so it reminds me of her happiness”. 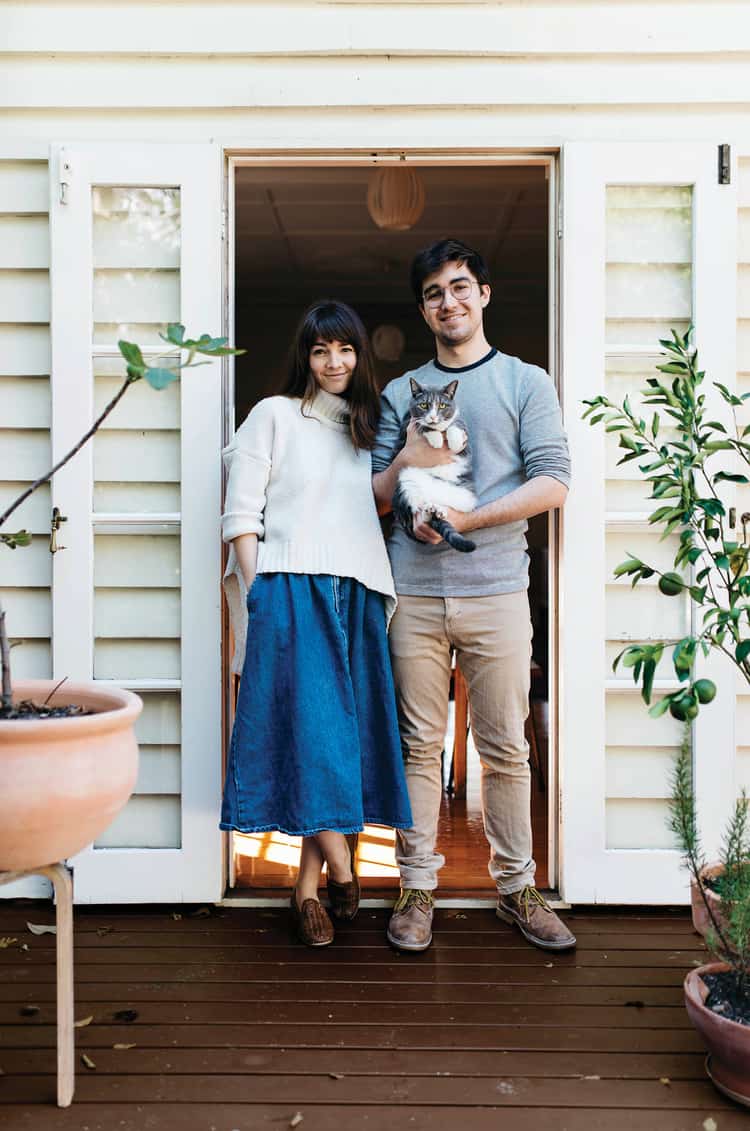 But it’s ceramics that are Nicolette’s main forte. She has set up a studio space underneath the house, as planned, with ample shelving and a new pottery wheel which is seeing a lot of action. Her striking new pieces feature contrast in form – perhaps elongated necks, or large bulbous bases and lots of handles. “I’ll put a handle on anything!” Nicolette laughs. “They finish a piece nicely.”

Pretty much everything is finished nicely around Tom and Nicolette’s new place – and they’re thriving on the change. 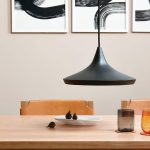 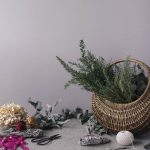