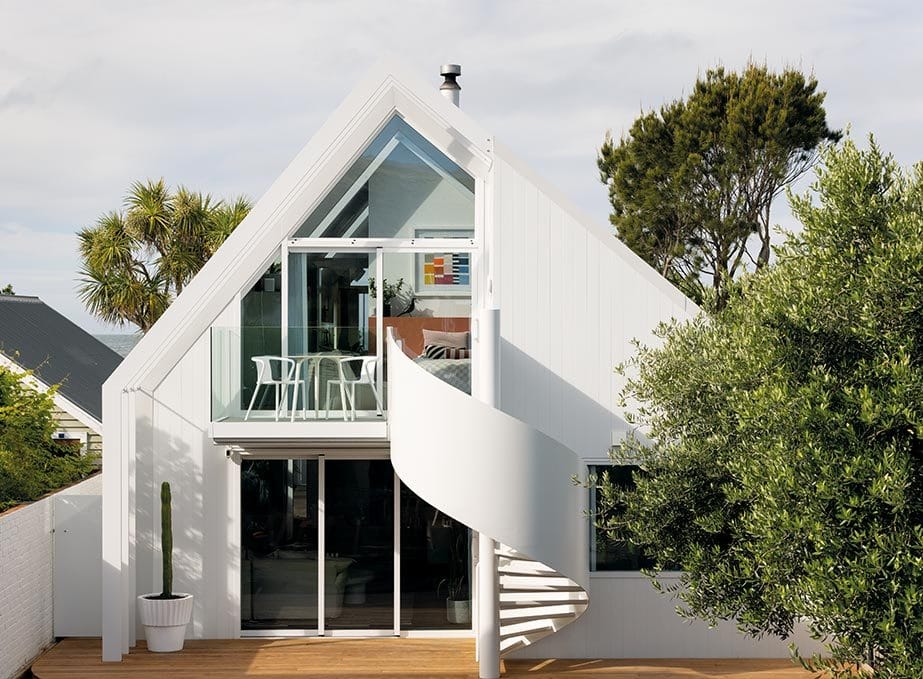 No stranger to renovating, interior creative Alex Fulton of Alex Fulton Design has traversed some varied terrain while doing up houses to suit the life stages she’s shared with her husband Jeff and their daughters Isla (18) and Violet (16). Her most recent endeavor, dubbed the AFD Beach Barn, could be her greatest conquest yet.
This renovation journey was one that brought her family back to the seaside suburb of Sumner in Ōtautahi/Christchurch, where they belong. They’d previously called this community home and missed it dearly during the years they spent living in Marlborough after the earthquake. Having kept hold of a bach in the neighbourhood, they’d still been able to spend long weekends here, though, so once their daughters were happily installed in a local high school, Alex (below) and Jeff set about settling the whole family back in. 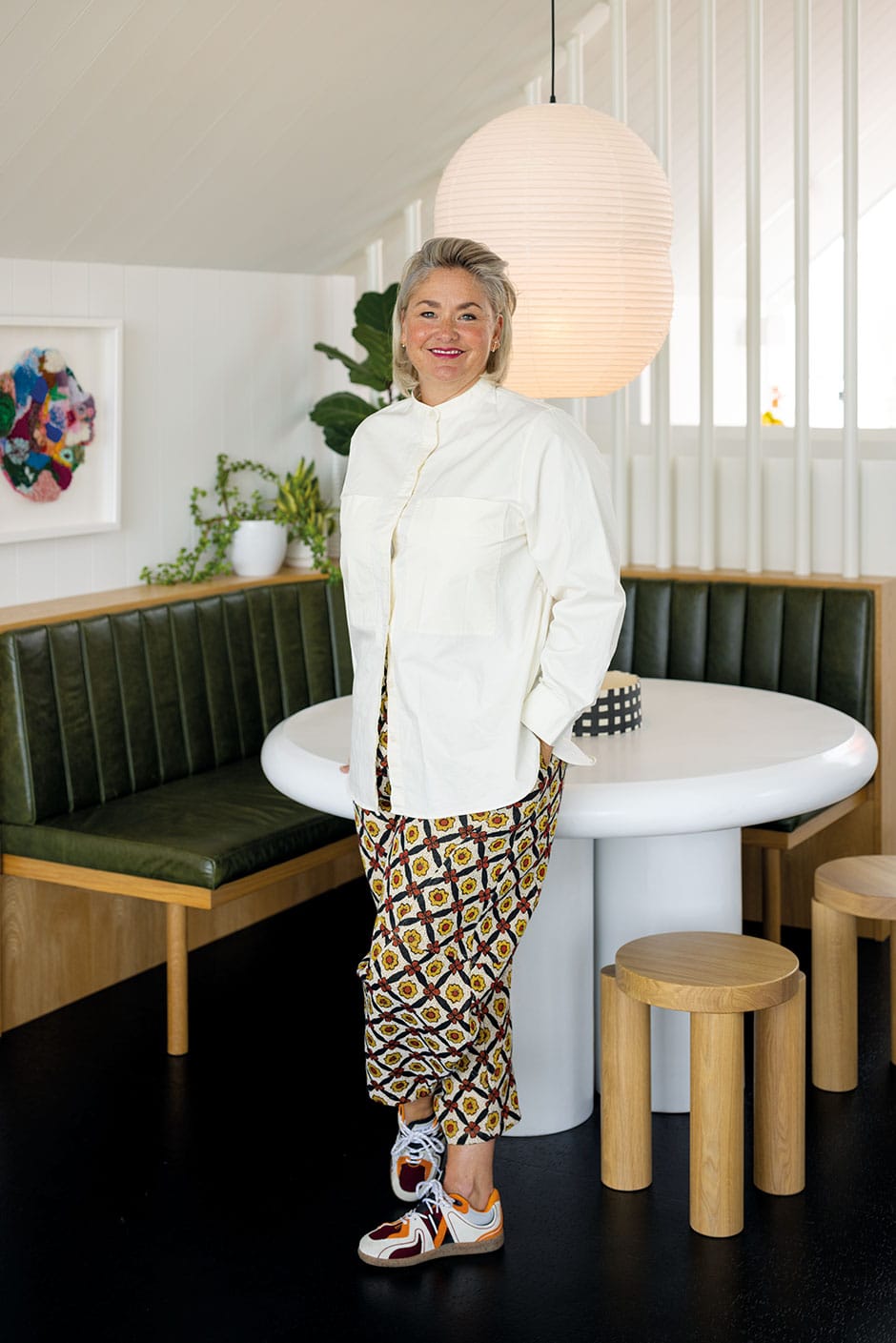 This property was fortuitously discovered when Alex spied a real estate sign while walking her dogs along the esplanade — the day before it went to auction. Houses don’t come up for sale on this sought-after strip very often, so they jumped at the chance.
“We’ve owned places in Sumner for a long time now — this is our fifth house and each move has bought us closer to the sea,” says Alex. “This home takes in all the best views — the ocean front and centre, and the beauty of the Port Hills in the background.” 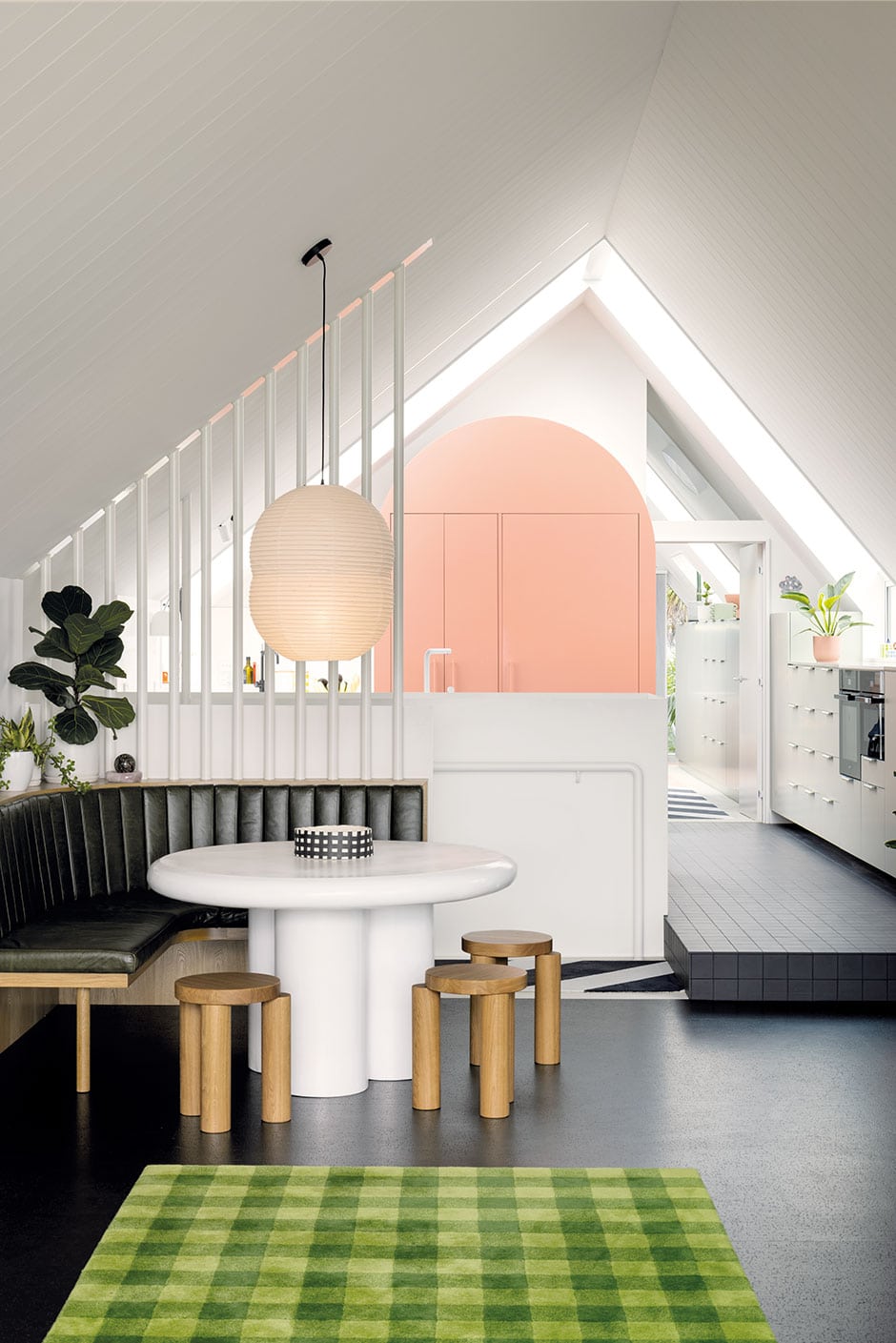 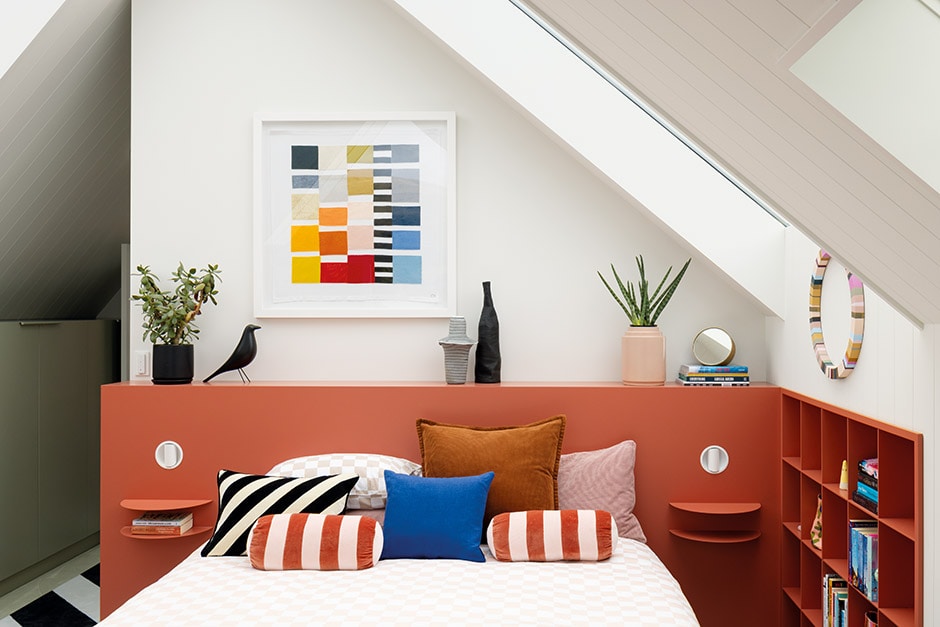 Unlike their previous interior-focused renovations, which were executed bit by bit as time and money allowed, the update of this four-bedroom 1930s weatherboard house took the building right back to its bones. Alex rolled up her sleeves and got stuck in at every stage of the process, project managing on site. The long, skinny property with six neighbours imposed certain restrictions, but Alex was unfazed — in fact, having boundaries to push up against is an aspect of the design process that excites her. After living in the house for several seasons, the overarching mood she wanted to create materialised and she joined forces with her friend and long-time collaborator, architect Charlie Nott, to realise her vision.
“When we got together to analyse the spaces, it was like a game of problem-solving ping-pong,” she says. “I’d bring up something that I thought needed to be addressed, then Charlie would come in, and vice versa. We knew what gaps needed to be filled by architectural thinking, and then I added a sprinkling of design thinking.”

Retaining the original floorplan and form, the redesign executed by Trevor Hone Builders focused on maximising the interior and creating more fluid connections inside and out. A cathedral ceiling adds volume to the upstairs, while downstairs is a cocooning space. White- on-white-on-white fixtures and fittings make every other detail feel purposeful, exactly how Alex likes it. Walls in Resene Wan White and black cork flooring combine to provide a gallery-esque backdrop ripe for the injection of colour that’s inserted through furniture- like cabinetry and quirky custom carpets, along with treasured art and objects. 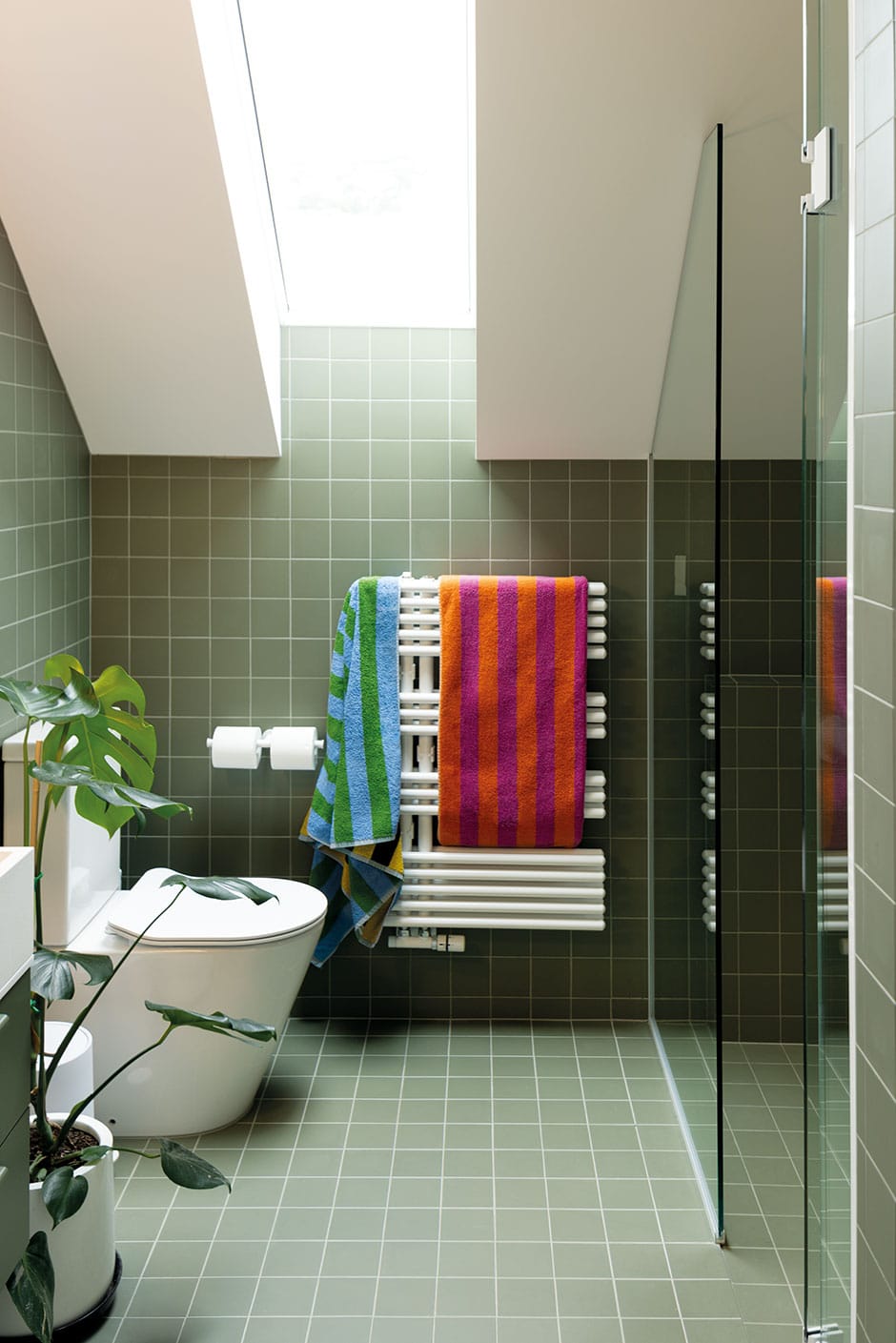 From the street, hard landscaping and Japanese-inspired structural planting by Henry Blakely Landscapes ushers you towards the front door on the side of the house. Once inside, you can linger in the lounge that splits off towards Isla and Violet’s bedrooms and bathroom, or head upstairs to the apartment-like parent pad. 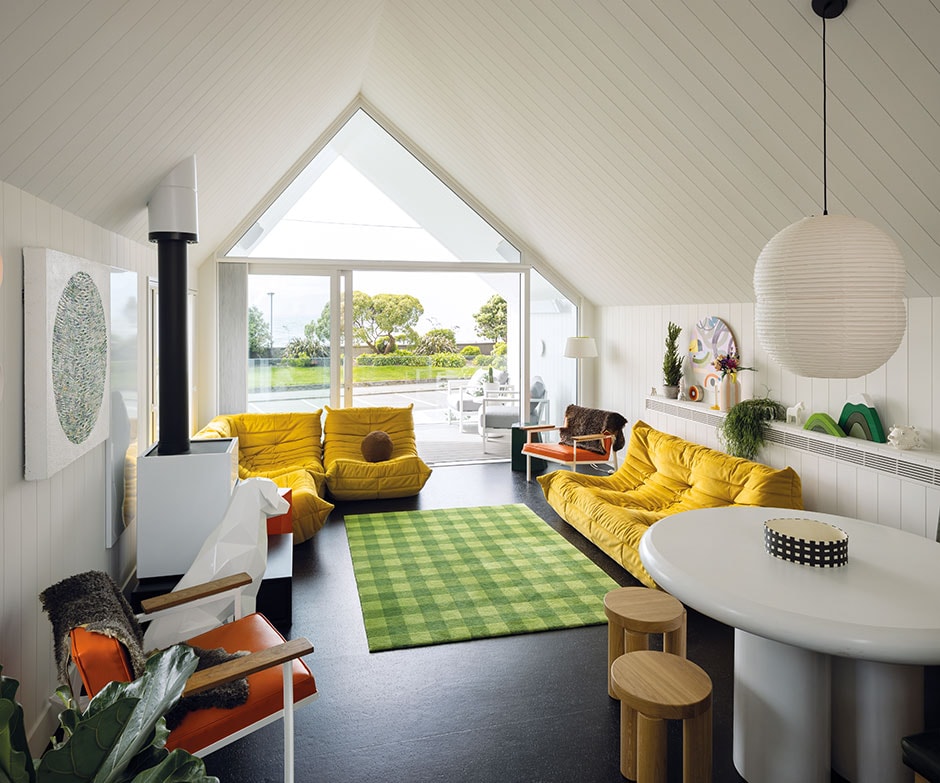 “Living with older teenagers and with one of them now off at uni, we didn’t want to be rattling around in a big house,” says Alex. “That was one of the main pluses of the layout here — it has small-home merits. With our bedroom and living upstairs, it feels like a studio, and I like that you come up and it’s a surprise.”
A flight of stairs isn’t all that separates these spaces. Alex and Jeff’s thing for colour is in contrast to the girls’ strong preference for pale. “As with all client-designer relationships, it’s been my job to listen to everyone who’s living in the house,” says Alex. “The girls are in a beige phase and I saw that as a bit of a challenge — give me a brief and I’ll give it the AFD flavour!” 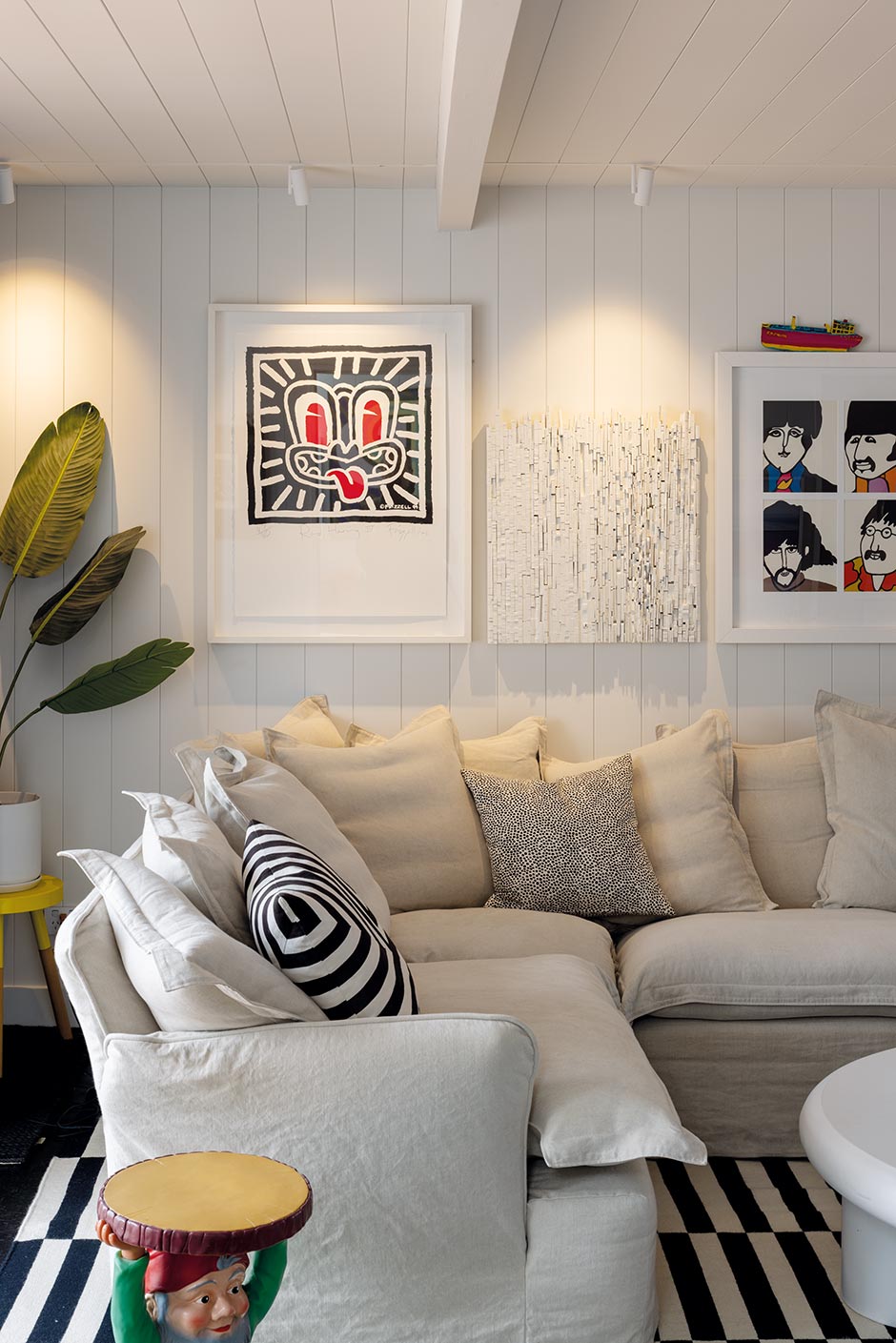 The more neutral mood downstairs is anything but boring. Introducing a little less colour, Alex turned to texture and curiosities in these spaces. Circulating through them, you pass by a jewel box of a laundry, in which she managed to get a shot of bold colour across the line.

“People probably think I’m not very restrained, but I actually am,” says Alex. “There’s a ‘why’ behind everything. I love defining areas, detailing where things stop and start — I think it’s quite important because then your brain goes, ‘Right, I’m in this room now’. It’s like writing a story — you establish all of your characters and then it’s a matter of how you’re going to use them in each chapter.”
The consistency of the palette throughout this home allows the spaces to talk to each other, telling stories of this family’s passions and adventures. This is a home that speaks volumes about the life lived within it. 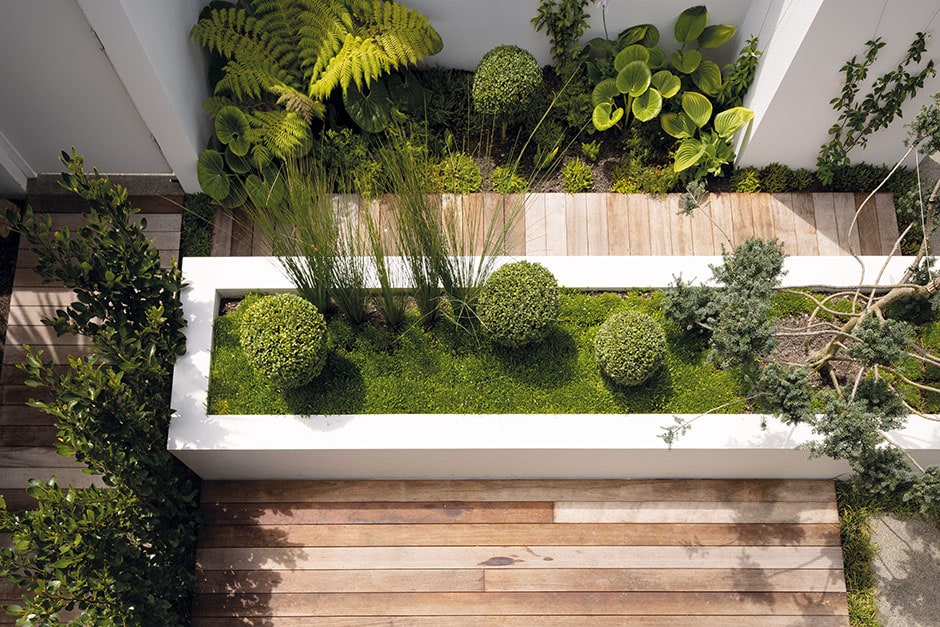 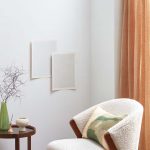 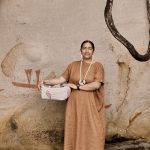