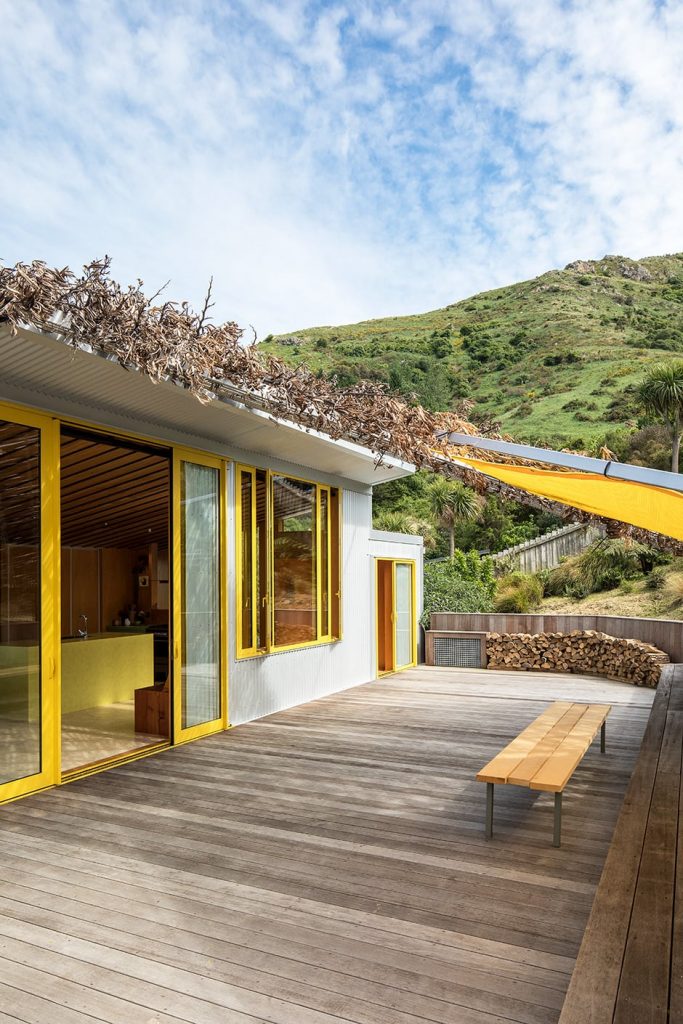 Bull O’Sullivan Architecture renovated this former state house in Lyttelton with whānau and whenua at its heart.

This two-storey former state house on a Lyttelton hillside sports an exterior paint scheme that’s loud and proud for good reason. Boaties navigating the harbour use it as a landmark and the citrusy orange speaks a similar visual language as a neighbouring state house in apple green.
Although the owners — a couple and their two teenagers — are community-minded, they don’t have mana whenua here. They moved south from Auckland for study and then work, and ended up here “by happy accident” because they wanted to be close to the water and found this then three-bedroom home after renting in the area. When they asked architect Michael O’Sullivan for help with a renovation, they were driven to create somewhere their extended family could stay, and to make the home so desirable that their near-adult children would never want to leave.
The port town of Lyttelton lies on the side of a giant caldera, so every section is vertiginous. Forcing a generic state-house plan onto this site had been awkward; the reframe needed better integration with the land. 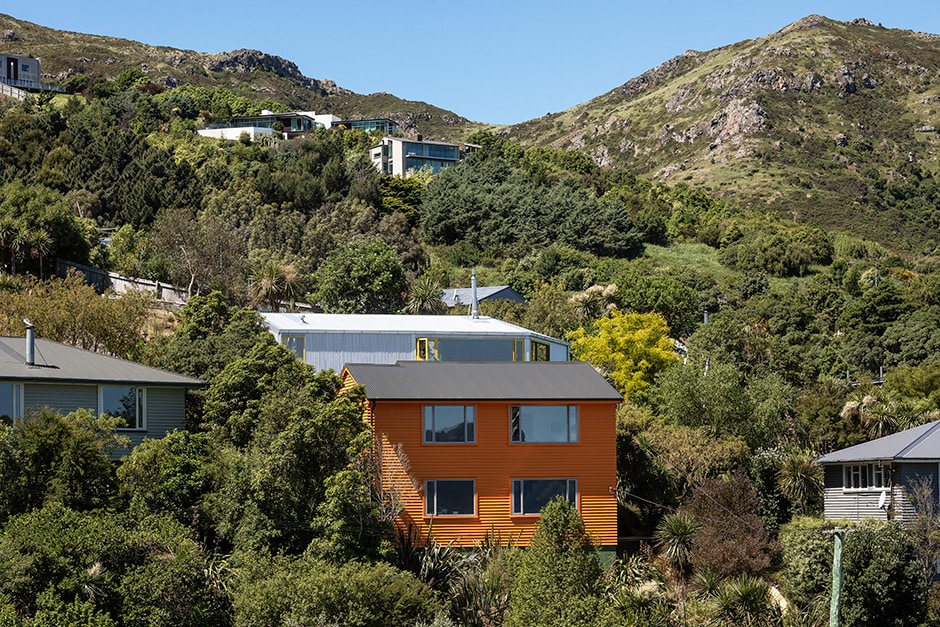 The owners met Michael when he was working on the build of his South Island home/studio of his practice Bull O’Sullivan Architecture. Wandering down to take a look, “we thought it was some sort of ‘out-there’ house,” says one of the homeowners. “And then we saw it had won the  Sir Ian Athfield Award for New Zealand architecture.”
It wasn’t difficult for Michael to convince the family to rearrange the interior of the state house for more fluidity. The idea of an additional pavilion was more unexpected, but not unwelcome. “We walked to the back of the section, lay down and looked north, up towards the edge of the caldera,” recalls Michael. Building here represented an opportunity to connect with the sun — and with each other.

The owners showed Michael a photograph of one of their treasured moments: whānau congregated around a barbecue on a deck, laughing and eating kai. The concept of manaakitanga (hospitality) became a driving force in the design; they also wanted it to reflect the feeling of being on a marae.

In bringing this to life, the relationship moved beyond that of client and advisor. One of the homeowners is a trained draughtsman unafraid to get hands-on with a project, and Michael is a like-minded spirit — a maker as much as an architect. Many decisions were made away from the drawing board, as great ideas often are. Michael and the family worked alongside the builders on the addition, as bit by arduous bit, the pavilion wedged into the hillside. “The site’s too steep for heavy machinery, so my son and I became labourers, carrying materials up,” says one of the homeowners.

The result is a crafted interweaving of long-standing Māori values with a contemporary overlay: two buildings linked by an internal staircase but also an ātea — a transition zone reminiscent of the open ground that fronts a wharenui. 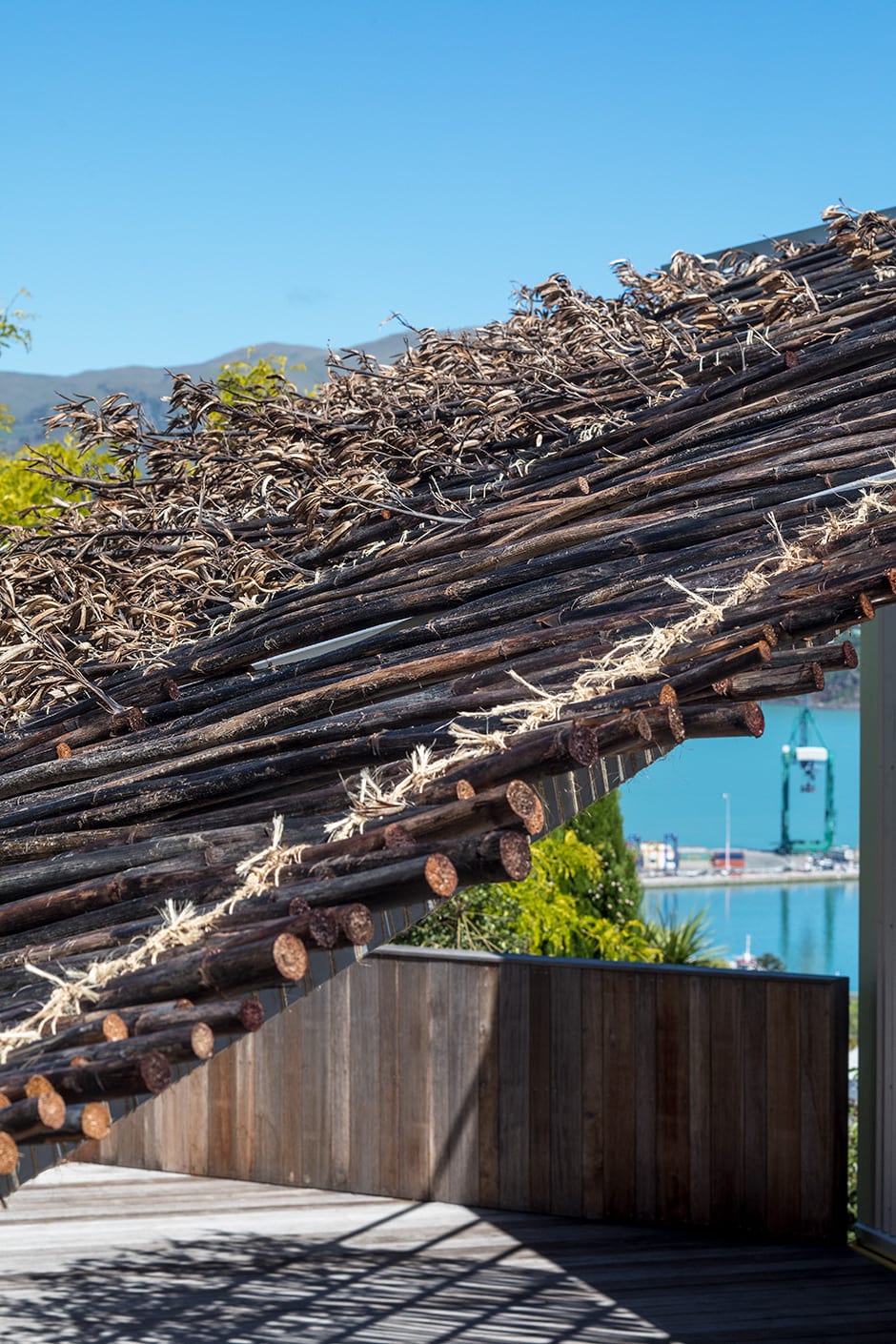 The original home already had enough bedrooms and bathrooms for its occupants, but several walls were removed to create a music/theatre space. Here, Michael took inspiration from Adolf Loos’ American Bar in Vienna, lining the walls with dark wenge timber to make it moody and intimate. “I was a DJ for a long time, so I have a lot of records,” says one of the home- owners. “It’s where I can go to put on some music and not be distracted.” Three shelving units were designed to accommodate his sizeable collection, but there are still more records that don’t fit. “I think I’m in trouble — I might have to sell a few.”
In contrast, the pavilion is light, bright and made for gatherings. Embracing kitchen, dining and living, its asymmetrical form traces the outline of the site, and bench seating beneath the windows maximises the view. Here again, the palette strays from neutral, with the kitchen bench and island featuring Formica in shades of nostalgic green and yellow that hark of a happy history. “They’re the sort of thing you’d see on a 1950s caravan table,” says Michael.

Window joinery powdercoated yellow is a nod to the more recent past; the couple bought the home from a painter who used vivid yellow on the exterior. The plywood wall linings are warm and textural in this space that opens up on both sides — to the glittering harbour in the south and a bush backdrop facing north. “We were also fortunate to secure some old kauri beams from a warehouse that collapsed in the earthquake,” says Michael, who incorporated 25mm-thick layers of heart kauri as ceiling detail. While the building progressed, he tackled making a dining table and bench seat in his workshop. “We do that for most of our projects,” he says. “As the heart of the home, it’s critically important that the table speaks to the rest of the architecture.”
Outside, where a deck basks in newly captured northern light, some shelter was called for: a pergola based on the shape of a Māori motif, the niho taniwha (teeth of the taniwha) — a saw-edged triangular form that predominates in wharenui. Instead of the straight lines that were Michael’s initial thought, this shifted to a diagonal geometry, and while the architect welded the steel skeleton, the family went off in search of kōrari fronds to top it. 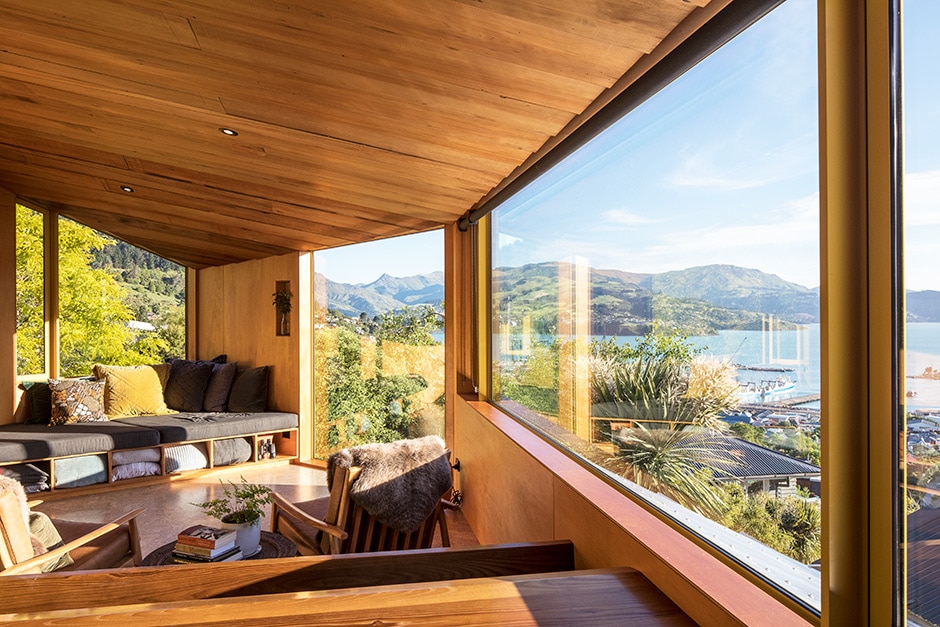 Traditional values and new materials collide in this transformation that balances poetry with practicality. It’s easy to be mesmerised by the weather rolling in over the ocean from the south and east, and when whānau  from Auckland and Australia visited last Christmas, the home embraced 15 or 16 people with ease. Some occupied the bedrooms, others hunkered down on the bench seats, and still more slept on mattresses arranged on the floor. The flexible form of the home echoed with togetherness.
When Covid-19 made such gatherings impossible, the whare donned a different face. Members of the household could retreat to a quiet corner to reflect on the new normal, or meet in the pavilion with its grandstand view overlooking an amphitheatre of homesteads in a community the owners now feel very much a part of. 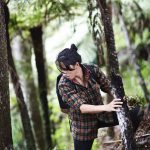 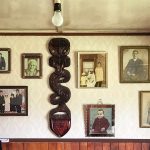